Mortgage borrowers hit hardest by the pandemic may find themselves paying out thousands more each year, because they believe the financial fallout has affected their ability to remortgage.

Almost one third of borrowers who have seen their incomes fall due to Covid-19 expect to move onto their lender’s standard variable rate once their initial deal ends rather than remortgaging, according to research from Legal & General Mortgage Club.

Moving onto a lender’s SVR, also known as a reversion rate, increases annual mortgage payments for a typical borrower by an average of £2,400 compared with the average two-year fixed rate deal. 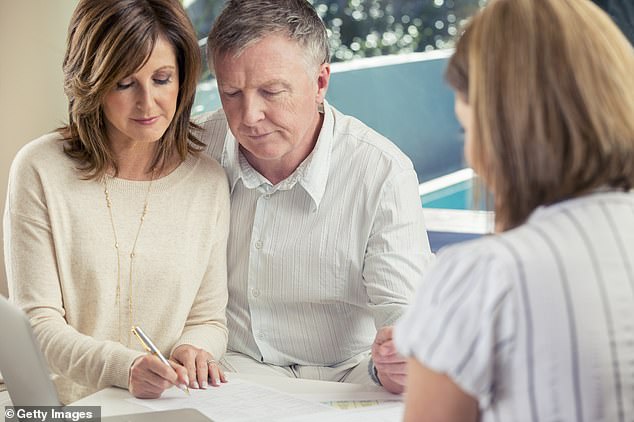 The average two-year fixed rate mortgage has an interest rate of 2.58 per cent, according to Moneyfacts.

The average SVR is 4.41 per cent, meaning that the same borrower would find themselves paying £1,101 each month – an increase of almost £200.

This could create further financial difficulties for homeowners at a time when their incomes may already be stretched or reduced.

‘While the coronavirus crisis has undoubtedly affected people’s finances in different ways, those who have seen their incomes drop will likely be finding this a particularly challenging time’, says Kevin Roberts, director at L&G.

‘It’s vital they avoid falling onto a reversion rate and paying more, when there are other affordable options available.’

WHAT IS AN SVR?

As with savings accounts, energy bills and car insurance, mortgage lenders will offer you an enticing fixed-term deal to draw you in before moving you on to a less lucrative one later.

A lender’s standard variable rate, also known as a reversion rate, is the rate your lender will move you on to when your initial period of two, three or five years is up – unless you remortgage.

Your SVR can be two or three times more expensive than the rate you were on before – and because it is variable, what you pay can change each month. Unlike a tracker mortgage, it is not tied to the Bank of England base rate – so the lender sets the rate themselves.

However, there are some benefits to being on an SVR. Most don’t have an early repayment charge, so you can overpay or exit the mortgage without fees. Arrangement fees are also low, but this is negated by higher interest.

SVRs are the only option for people who cannot remortgage – either because they have very little equity in their home, or have almost repaid their mortgage and therefore don’t meet lenders’ minimum lending thresholds.

L&G says more than 700,000 borrowers will be reaching the end of their two- and five-year fixed-rate mortgages this year.

More than half of borrowers whose incomes have reduced during the crisis are worried lenders will now be scrutinising their finances in more depth than before the pandemic.

In addition, 67 per cent of borrowers believe it will be harder to remortgage when furloughed.

Furloughed workers should at least be able to access a new deal with their current lender, as the usual affordability checks will not be applied.

However, it may be more problematic for those who are keen to remortgage to a new lender, either to secure a cheaper rate or to borrow additional money.

‘They will likely need written confirmation from their employer to state when they are coming off furlough and that their return to work will be on the same terms as before furlough,’ says Nicholas Morrey, product technical manager at John Charcol.

‘Without that, they may struggle to get the best deals with the mainstream lenders.’

Half of all borrowers are also concerned that their decision to take a payment ‘holiday’ will impact their future mortgage options.

Some 2.5 million people are estimated to have taken out a mortgage holiday since the start of the first lockdown, according to UK Finance.

Although a payment holiday should not impact your credit score, it is possible that you will find yourself under increased scrutiny when you come to remortgage.

‘There is some evidence that lenders are taking mortgage holidays into account when assessing a borrower for any remortgage or future borrowing,’ says Andrew Montlake, managing director at Coreco Mortgages.

‘Anyone looking to remortgage whilst on a repayment holiday would find it difficult to do so.

‘Those who have come out of the payment holiday and are fully back up to date with their deferred payments should not have an issue, although the question may well be asked by some lenders.’

Even among those who don’t plan to revert to their lender’s SVR, over half say they are now more likely to stick with their current lender when looking for a new deal.

In fact, 37 per cent will do so because they believe this will be the easiest way to secure a new deal.

‘It’s really important to highlight that borrowers shouldn’t just drift onto the SVR – most lenders will have alternative rates on offer at the end of the deal period,’ says David Hollingworth, associate director at L&C mortgages.

‘Depending on the individual circumstances, a straight switch of rate with the current lender may be the right approach if payments can be maintained, but the borrower may struggle to meet another lender’s criteria.’

‘Where the switch is on a like-for-like basis and there’s no need for additional borrowing or a change to the mortgage term, it should be a simple process and avoid the need for your current lender to check your income and outgoings.’

‘Mortgage brokers will be able to put the switch into action, as well as giving that peace of mind that all options have been considered.’