A number of Western companies with large physical footprints in Russia are facing increasing threats of boycotts unless they pull out of the country over the invasion of Ukraine.

Quick-service chains such as KFC, McDonald’s and Starbucks together have thousands of locations in Russia, while Coca-Cola and PepsiCo operate large bottling plants in the country.

Western hotel chains including Hilton, Marriott and Hyatt also operate dozens of hotels in Russia, employing thousands of local workers, and Unilever and Mondelez continue selling their brands there.

After a flood of major Western players including Nike, Apple, and IKEA announced the suspension of their operations in Russia, pressure is growing on the companies that remain to take a stand over the assault on Ukraine.

But while companies like Netflix, which pulled out of Russia on Sunday, can suspend service with essentially the flip of a switch, companies with large physical footprints can only cut ties through a process that would be complex, costly and difficult to reverse.

As well, franchise operating agreements complicated matters for chains that don’t actually own and operate their own locations in Russia. 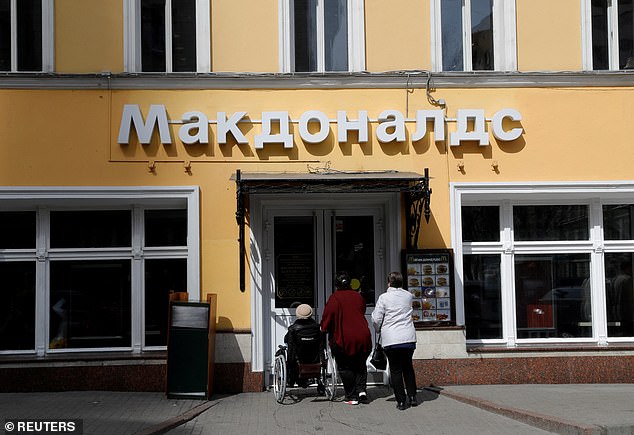 People enter a McDonald’s restaurant in Moscow in a file photo. Today, McDonald’s has 847 locations in Russia, and is facing mounting calls to pull out of the country 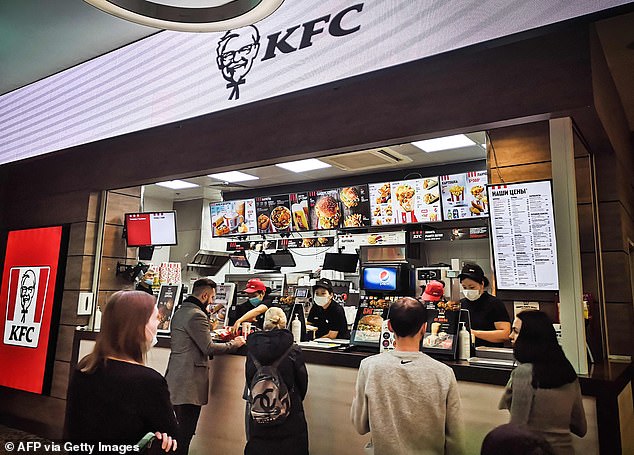 KFC has one of the largest footprints in Russia with more than 1,000 locations. Pictured: A KFC location in the Evroreisky (European) shopping mall in Moscow on Monday

Nevertheless, calls are mounting for well-known American brands to sever ties with the country, with some consumers calling for boycotts and even the chief of New York’s pension fund saying the time has come for the companies to leave Russia.

Kentucky-based Yum Brands has one of the largest footprints in Russia, with more than 1,000 KFC locations and 50 Pizza Huts — though all are owned and operated by franchisees.

Yum has said that it is monitoring the situation in Ukraine closely, and that it is making donations to humanitarian relief groups, but that it is too early to discuss the future of its operations in Russia.

McDonald’s, meanwhile, has one of the most iconic relationships with Russia of all Western businesses.

When the first McDonald’s opened its first location in Russia in 1990, it signaled the end of the Cold War, and an estimated 30,000 Russians lined up in Moscow to try the famed American fast-food fare.

Today, McDonald’s has 847 locations in Russia — and unlike other chains, most are directly owned and operated by the company, rather than franchisees.

Russia accounts for roughly 9 percent of McDonald’s global revenue, and 3 percent of its operating income, the company says.

McDonald’s did not immediately respond to an inquiry from DailyMail.com regarding its future in Russia, and the company has remained silent in the face of mounting criticism. 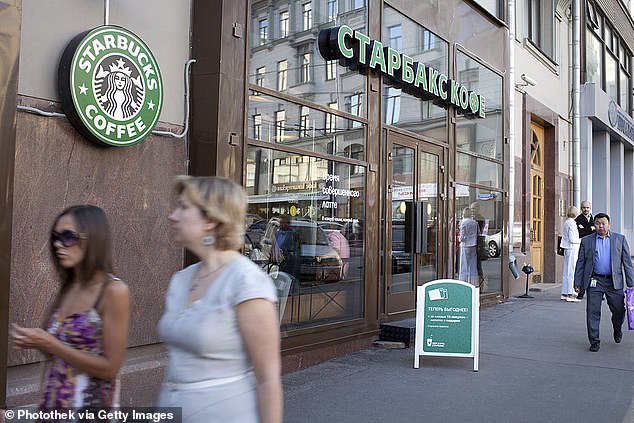 Starbucks’ 130 locations in Russia are owned and operated by the Kuwaiti conglomerate Alshaya Group through a licensing agreement. A Moscow Starbucks is seen above

Starbucks has a smaller Russian footprint, with about 130 locations in the country.

Johnson said that Starbucks would donate any royalties it receives from its operations in Russia to humanitarian relief efforts in Ukraine.

Starbucks’ locations in Russia are owned and operated by the Kuwaiti conglomerate Alshaya Group through a licensing agreement.

Coca-Cola and PepsiCo have also shown no signs of pulling out of Russia, which accounts for about 4 percent of both companies’ global revenue.

Coca-Cola’s business in Russia is operated by Athens-based Coca-Cola Hellenic Bottling Company AG (Coca-Cola HBC), which runs 10 plants for the production of soft drinks and juices across Russia. 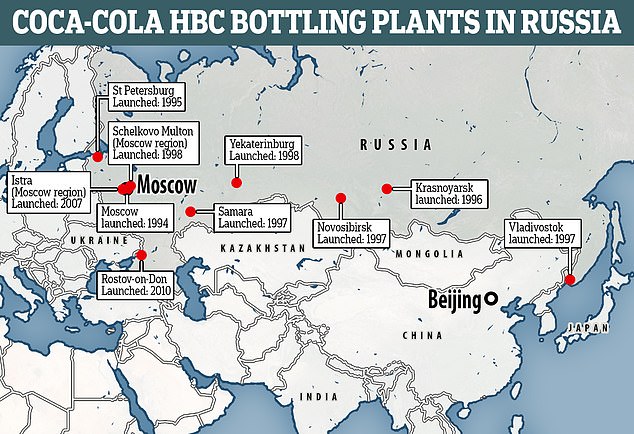 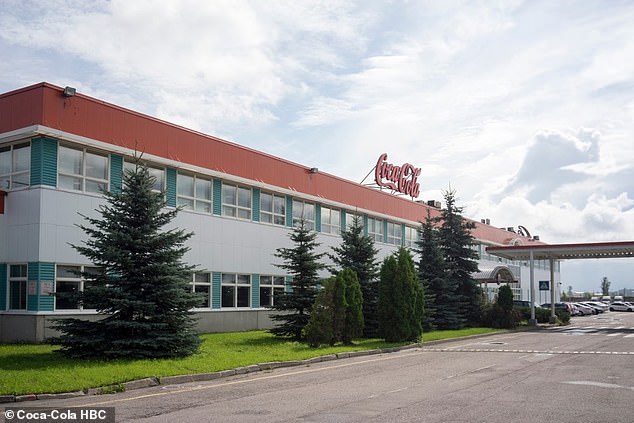 There are 10 bottling and distribution plants for Coca-Cola in Russia. Pictured: St Petersburg

On Friday, Ukrainian supermarket chain Novus said it would stop selling Coca-Cola products – including Coca-Cola, Fanta, Schweppes and BonAqua mineral water – and slammed the company as ‘shameless’ for continuing to ‘work for the invaders in full strength’.

In a post on the company’s Facebook page, it said: ‘Our supermarket chain no longer cooperates with the Coca-Cola company, which continues to operate in the territory of the aggressor. We are abandoning all products belonging to the brand.’

The company said in a statement: ‘From today, we are removing all products from the shelves of Silpo, Fora, FOZZY Cash&Carry, Market super Thrash (Thrash) stores and stop all future deliveries.’

Varus also joined in the boycott, citing the ‘official position of the Coca-Cola company to continue its activities in the market of the aggressor country’.

Pepsi is also notable as one of the few Western products that was allowed in the Soviet Union before the Iron Curtain fell.

Today, Pepsi has two production plants and sells snacks and beverages in the country, according to its most recent annual report for 2021.

Now public figures and social media users have are piling on pressure for the companies to pull out of Russia. 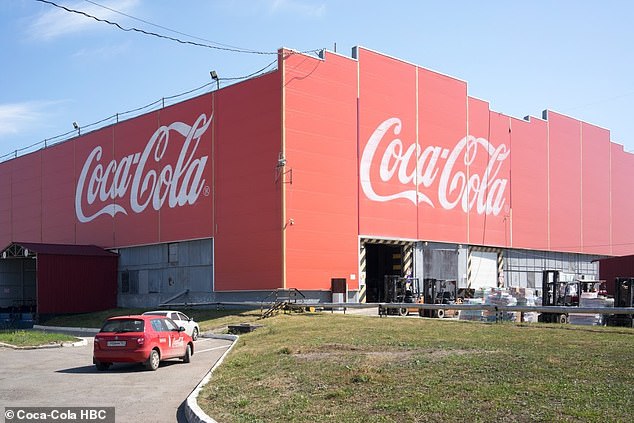 Coca-Cola has yet to officially comment on its operations in Russia but the Russian distribution company has told Tass that operations continue as normal. Pictured: Plant in Samara, Russia

Rep. Darrell Issa, a California Republican, tweeted on Sunday: ‘Coca-Cola had no problem calling for a boycott of Georgia over entirely reasonable election integrity reforms. Putin kills women and children, they do nothing. They refuse to pull out of Russia.’

DiNapoli said companies ‘need to consider whether doing business in Russia is worth the risk during this extraordinarily volatile time’.

He added: ‘Russia’s unprovoked invasion of Ukraine and its highly unpredictable foreign policy are a threat to the global economy.

‘We’re encouraging the companies we invest in to do a risk analysis and determine what is in the best interests of their company and their shareholders.’

Pausing or ending operations in Russia ‘would address various investment risks associated with the Russian market and play an important role in condemning Russia’s role in fundamentally undermining the international order that is vital to a strong and healthy global economy,’ the letter said.

In the UK, British politician John Mann tweeted: ‘If Mcdonalds and Starbucks continue to sell in Russia then an international boycott of their products should he instigated.’

‘They are refusing to withdraw from Russia. Let’s show them some people power.’