New, eye-opening renderings have been released of the interior of a 1,100mph (Mach 1.6) supersonic jet that will be capable of flying from New York to London in around three-and-a-half hours.

The $100million (£71million) Spike S-512 Supersonic Business Jet, by Boston-based Spike Aerospace, is slated to begin test flights in 2022 and begin flying passengers ‘in 2028’, according to CEO Vik Kachoria.

The Spike Aerospace team’s concept renderings show how the plane’s 12 to 18 passengers could find themselves zipping around the globe in something akin to a mini-hotel in the sky.

Flying from A to B on the Spike S-512 will be a journey to remember – by day or night. This rendering was released recently by Spike Aerospace 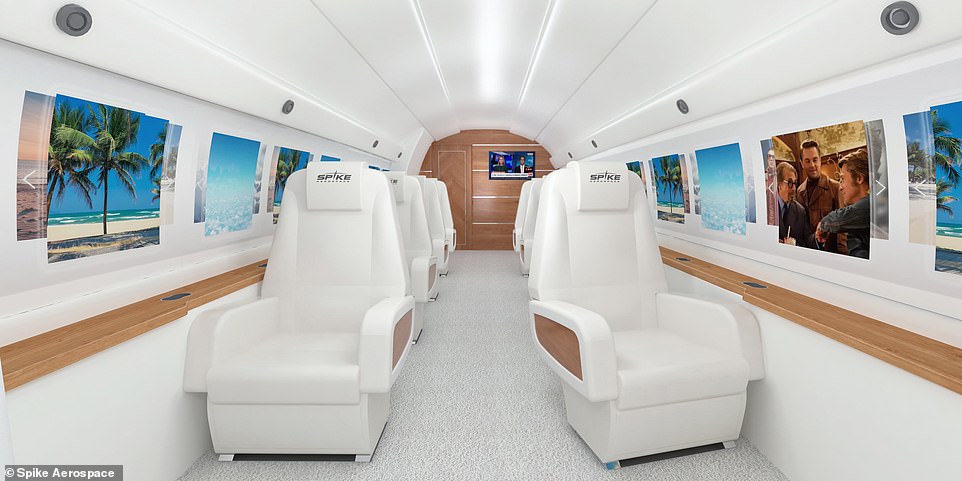 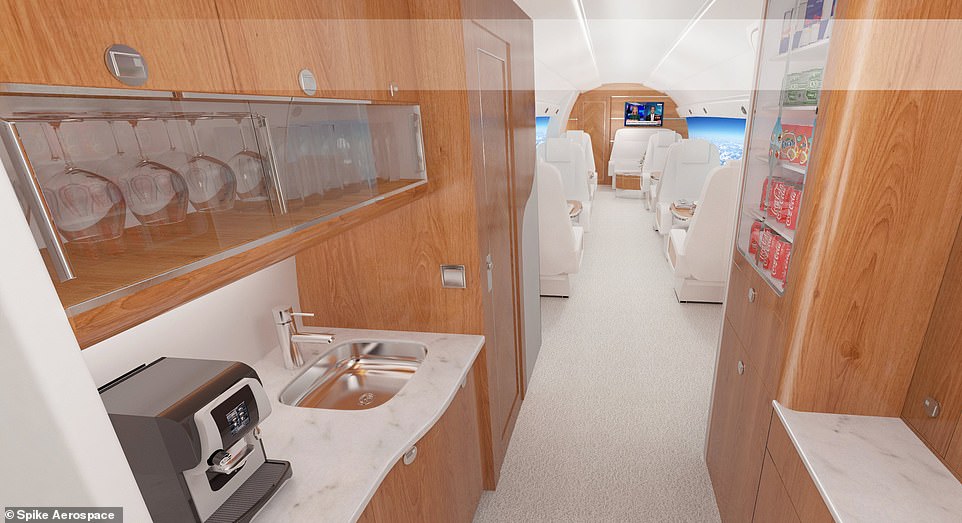 Each Spike S-512 interior will be fully customisable. This new rendering shows how an owner could install a posh galley 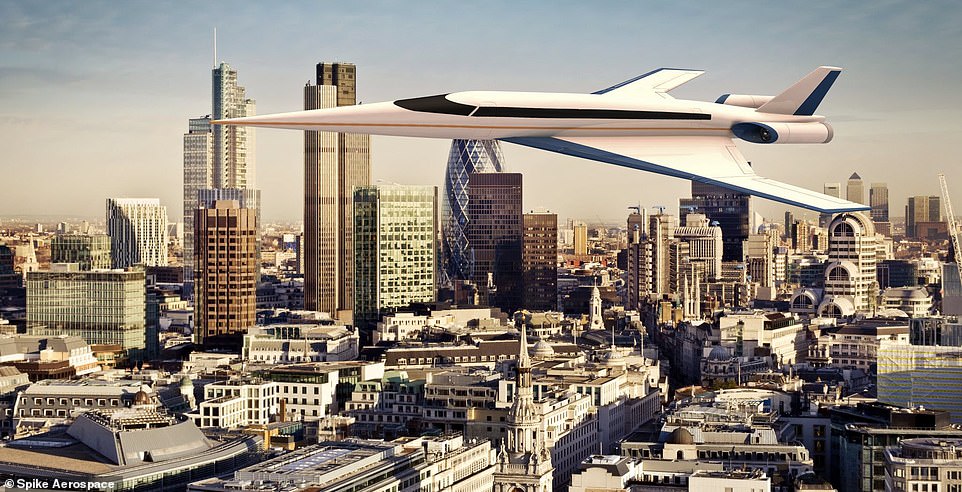 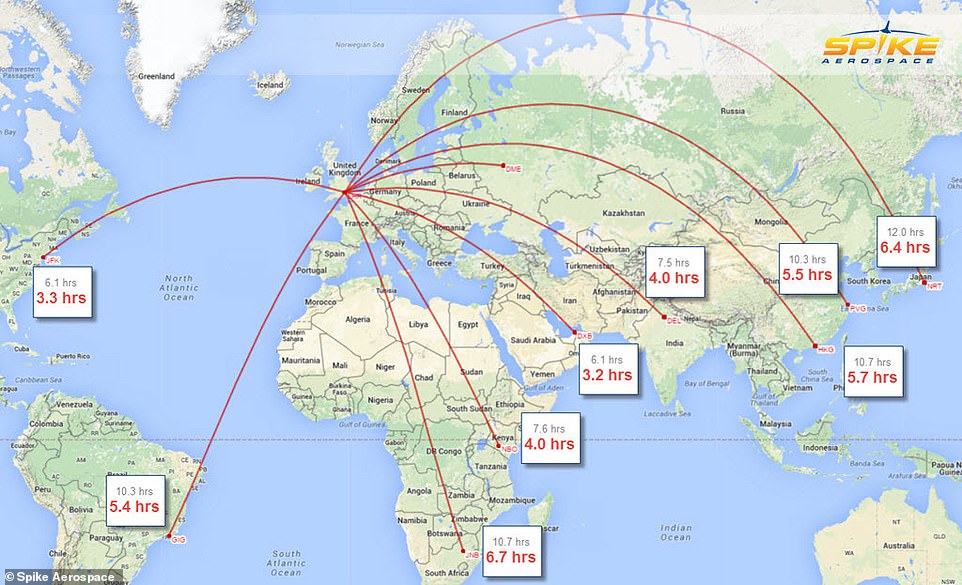 A ‘range map’ for the Mach 1.6 Spike S-512 indicating flight times from London to various major cities around the world

Mr Kachoria tells MailOnline Travel that the renderings show possibilities for the cabin, which will be fully customisable.

Even if the custom designs are relatively prosaic, the cabin will still be a showstopper.

That’s because it will incorporate exclusive ‘windowless Multiplex Digital technology’ – full-length high-definition screens instead of windows that can display anything from natural-world panoramas to movies and laptop presentations.

The view from these displays can be controlled by smartphone or tablet as well as intuitive touchpads at every seat, says Spike Aerospace.

The firm adds that by eliminating traditional windows, the cabin will offer ‘unprecedented noise reduction and superior strength for quiet, serene flights’.

As any aviation engineer will stress, windows are a weak point in the fuselage.

Of course, what will truly set the Spike S-512 apart from the common-or-garden business jet is its sheer speed and the stealthy way it’ll zip from point to point.

Spike Aerospace explains that the S-512 will be the first aircraft aerodynamically designed to offer ‘proprietary Quiet Supersonic Flight Technology’.

The upshot of this being a distinctly muffled sonic boom that’s less than 75 PLdb (perceived loudness level). It should sound like a ‘soft clap’, says Spike Aerospace.

By contrast, Concorde produced such a tremendous sonic boom effect that it was restricted to flights over transoceanic routes – primarily NYC to London or Paris, Spike Aerospace points out.

The S-512, it says, ‘was designed from the ground up to travel at supersonic speed quietly and efficiently, opening up destinations worldwide to travelers who demand the best and fastest private air transport’.

The plane’s twin engines will propel it from London to Dubai in just over three hours, Hong Kong in just over five-and-a-half hours and from New York to Los Angeles in just over two hours, to Tokyo in 6.4 hours and Rome in six hours.

Spike Aerospace says: ‘The S-512 will be the fastest civilian aircraft available, saving passengers hours of flight time on every trip and providing an unparalleled experience en route. Air travel will never be the same.’

The firm is also working on a private jet that will be even faster than the S-512 – one capable of flying from New York to London in just 90 minutes. But that won’t be making an appearance until at least 2035. 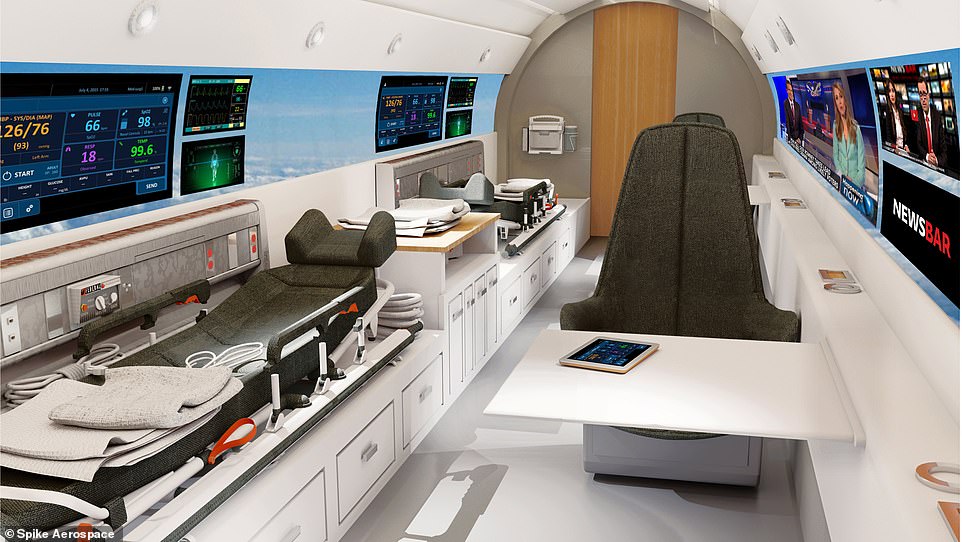 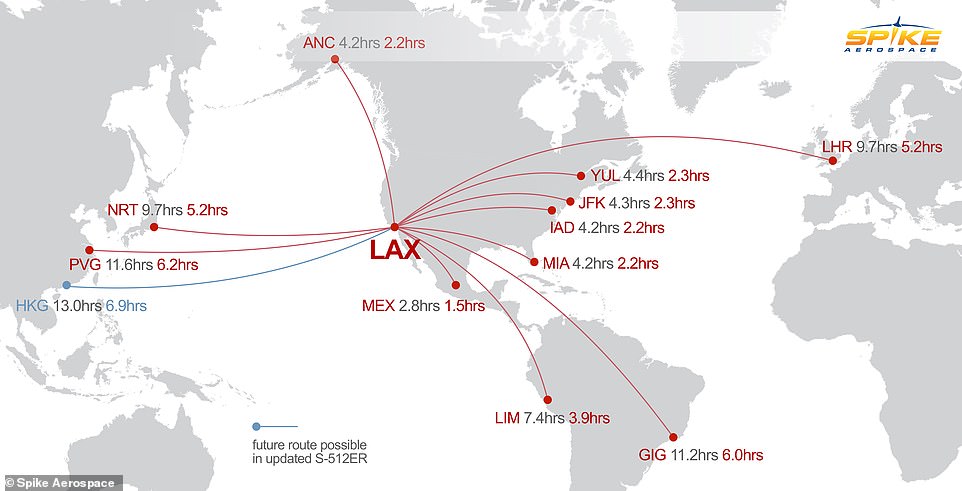 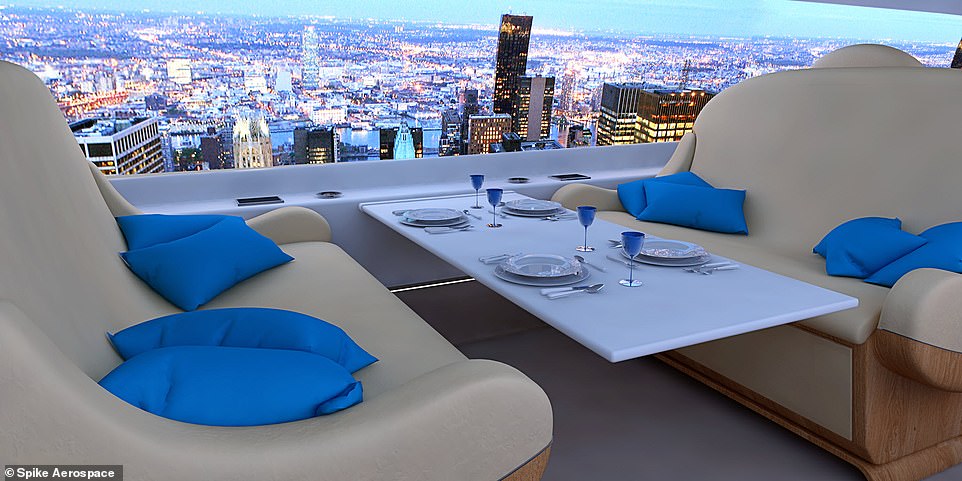 The Spike S-512 will incorporate exclusive ‘windowless Multiplex Digital technology’ – full-length high-definition screens instead of windows. This rendering was released by Spike Aerospace a few years ago 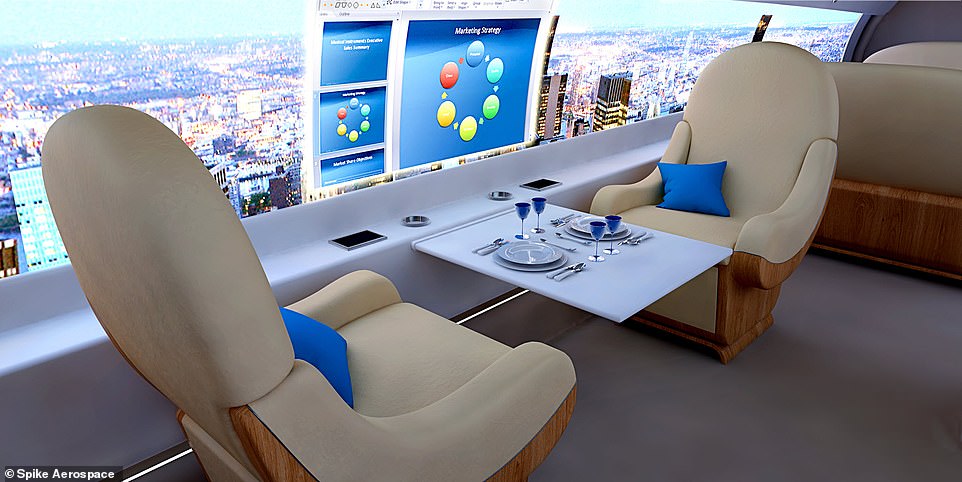 The S-512’s screens can display anything from natural-world panoramas to movies and laptop presentations. This rendering was released a few years ago by Spike Aerospace 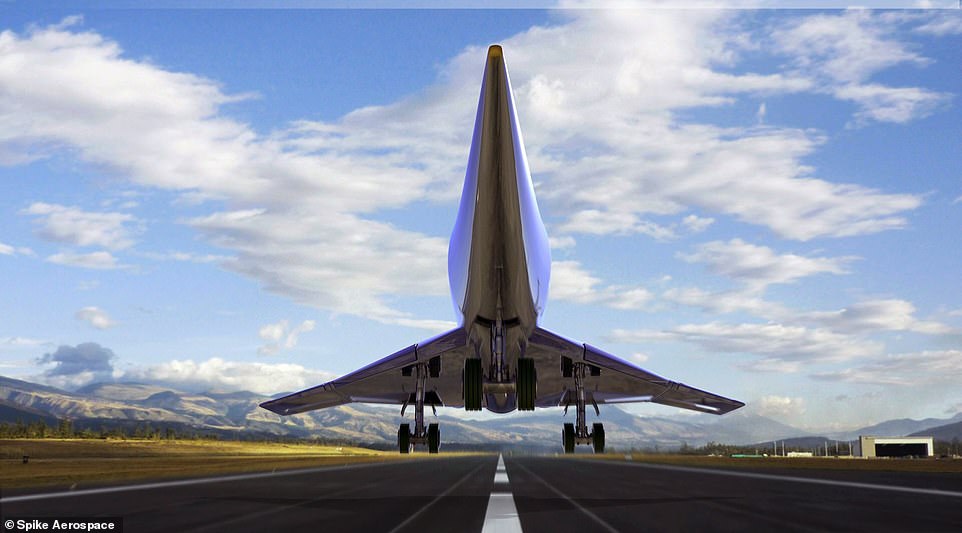 Spike Aerospace says: ‘The S-512 will be the fastest civilian aircraft available, saving passengers hours of flight time on every trip’ 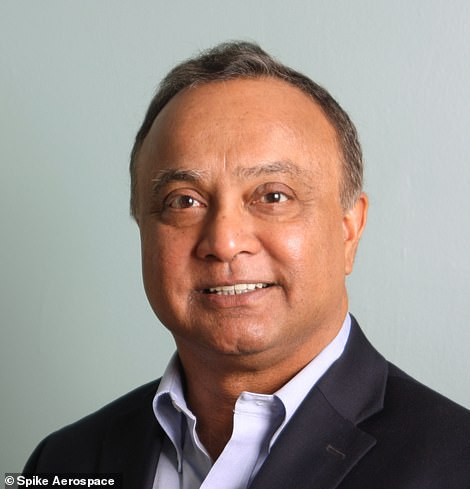 Concorde, the last supersonic passenger jet, entered service in 1976 and continued flying for 27 years. It is one of only two supersonic transports to have been operated commercially.

Concorde was jointly developed and manufactured by Aérospatiale and the British Aircraft Corporation (BAC) under an Anglo-French treaty.

Concorde was retired in 2003 due to a general downturn in the commercial aviation industry after the type’s only crash in 2000, the September 11 attacks in 2001, and a decision by Airbus, the successor to Aérospatiale and BAC, to discontinue maintenance support. 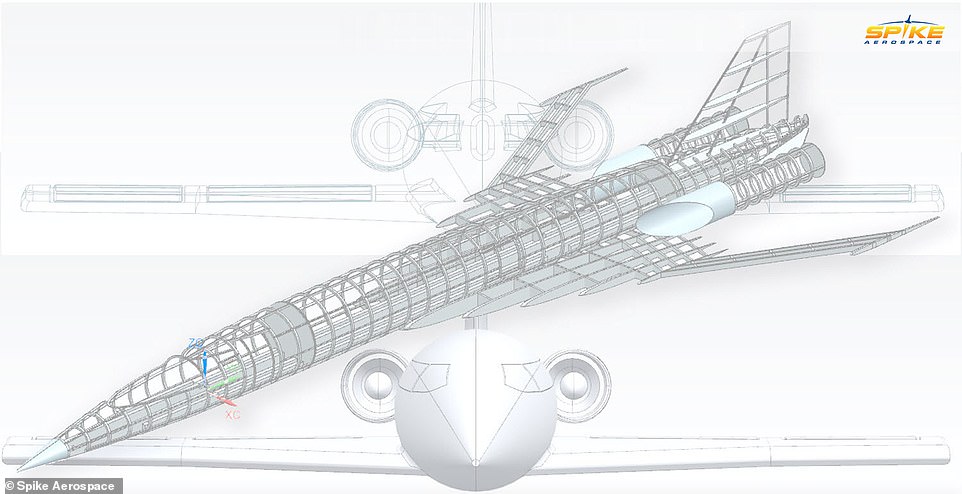 The S-512 ‘was designed from the ground up to travel at supersonic speed quietly and efficiently, opening up destinations worldwide to travelers who demand the best and fastest private air transport’