The ‘smart’ meter is poised to land a starring role in TV soaps and radio shows as the Government agency charged with promoting it seeks to encourage more people to fit one in their home.

As well as giving the device a ‘greenwash’ by arguing that its use will help save the planet, Tin Man is exploring a number of TV and radio ‘product placement’ options.

It has started with an online spoof of a daytime TV show that is fronted by comic actor Alexander Armstrong who waxes lyrical about smart meters. 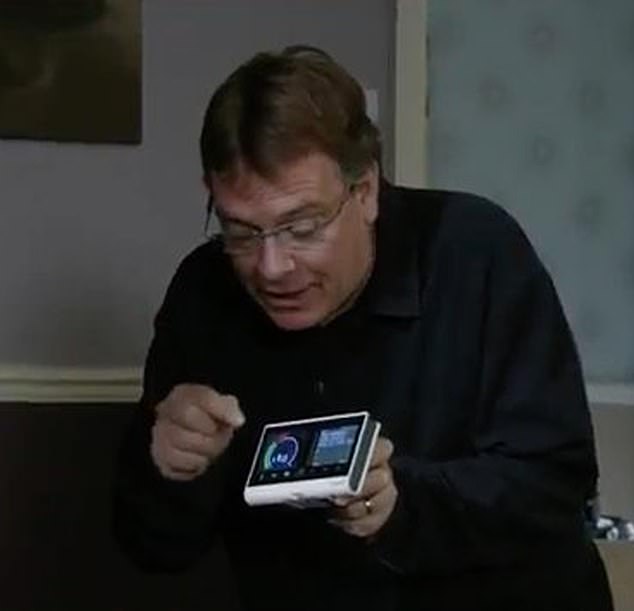 Plotline: EastEnders’ Ian Beale tried convincing his family of the merits of a smart meter – after spending months homeless

The initiative is in response to the much-delayed £11billion rollout of meters that is now four years behind schedule – with only just over half of all 29million households so far accepting the new gadgets. Originally, all homes were to have had one by 2020.

However, there are critics. Gordon Hughes, professor of economics at the University of Edinburgh and a former senior adviser on energy and environmental policy at the World Bank, says: ‘The smart meter is an epic failure.’

He explains: ‘It simply does not provide savings or help the environment in the way that all the propaganda being pumped out would have us believe.’

He adds: ‘It is no surprise Smart Energy GB is desperately exploring new ways to convince the public to accept them. Feel-good promotions involving aspirational images on TV, such as children voicing concerns about the future in soap operas such as EastEnders, is the sort of soft sell we can expect.

‘Or maybe, in the misguided claim that it is somehow offering a public service, meters could be part of plotlines, such as for a popular radio series such as The Archers. It has done this in the past with subjects such as smoke alarms.’

London-based Tin Man boasts online that it offers ‘creative’ ideas to improve the image of potentially toxic brands. Its clients include Barclays. It ‘tracks eight emotional connection points with consumers’ – jargon for pulling on heartstrings to convince people to buy into its promoted brands.

A Tin Man spokesperson says: ‘Millions of homes have a smart meter but none were visible on TV shows that we recently analysed. A third of viewers feel influenced by what they see on TV and we wish to encourage the industry to promote more positive eco-behaviour.’

So far the only starring role played by a smart meter was four years ago when EastEnders character Ian Beale tried convincing his family of their merits – after spending months homeless. It is hoped the soap could build on this initial promotion.

Smart meters work by sending energy usage details to suppliers using electronic wi-fi signals – saving the provider money by not having to send out a meter-reader. The smart meter also comes with a hand-held device that tells householders how much energy is being used in near real time.

Smart Energy GB claims it can help knock £200 a year off energy bills. But critics argue that it saves people nothing and the installation cost is about £400 a household, a levy drip-fed on to households’ energy bills. Only by changing energy use habits can people save money. 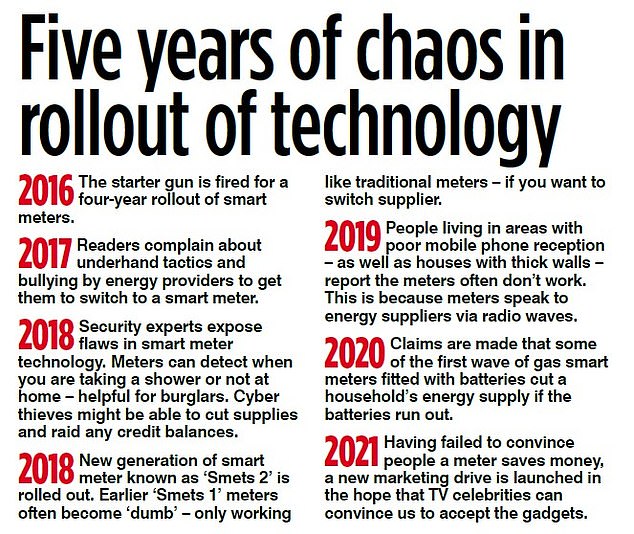 Another major problem is that many of the first generation devices turn ‘dumb’ and act just like an ordinary meter when you try to switch gas and electricity supplier.

There have also been cases of bullying where energy firms have tricked customers into accepting meters by wrongly claiming the old ones need to be replaced as they could become unsafe. There are additional fears the devices could be hacked. Suppliers also cajole people into switching by offering lower tariffs.

Alex Henney is a former Government adviser who worked for Cecil Parkinson, former Secretary of State for Energy, in the 1980s on privatisation. He says: ‘This latest greenwash attempt is a load of rubbish. Putting a meter in your home does not help the planet. The whole rollout is a disgrace and could have been done for half the cost. All this virtue signalling propaganda is a waste of taxpayers’ cash.’

For its part, Smart Energy GB says it has signed up Tin Man to help with a ‘green on screen’ campaign and that product placement of smart meters on TV shows is being considered. But it adds: ‘We do not divulge how much we invest in individual campaigns promoting smart meters.’

THIS IS MONEY PODCAST