NOT tickled pink! Fed-up clothes shop owner is forced to replace her new floral signs after ONE local complained that they were too colourful

The owner of a women’s clothes shop has been forced to tear down her new floral signs – after one person complained they were ‘too colourful’.

Kerry Ashby, 60, gave the front of her store a makeover and was hoping the vibrant new look would attract more customers when she reopens on April 12.

She forked out £600 for a professional decorator to paint two new signs for her Chameleon clothes shop in Louth, Lincs.

Kerrry also installed a flowered archway at the entrance to her shop, which is in a conservation area of the town, for customers to walk through.

But council leaders ordered her to replace the signs with the original dull beige and green ones and tear down the floral door decorations, saying they broke planning laws.

The ruling came after just one person complained to East Lindsey District Council about the new design which was finished last September. 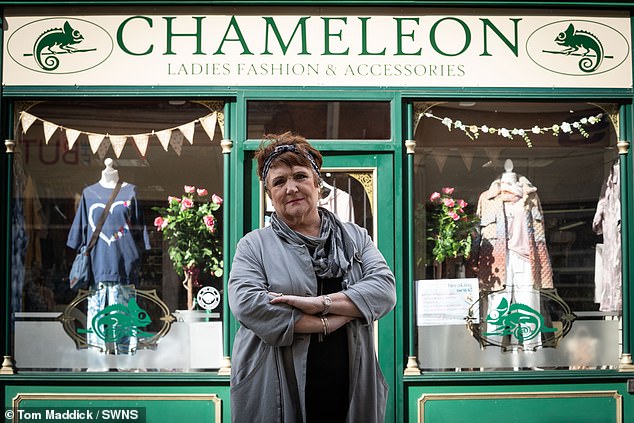 Kerry Ashby, 60, installed a vibrant sign in preparation for reopening in April but was forced to replace it with the old one (pictured) after one complaint to the local council in Louth, Lincs

Kerry, who has run the shop for seven years, said: ‘When I moved in here I had a new sign done and put it up straight away.

‘There were no problems at all and then last September I decided to have a new one sign and brighten it up a bit because over the years the sign was looking dull.

‘I had a very nice floral sign done for the top and the bottom of the shop and a garland to go around the door.

‘That was up for three months and everybody loved it and I used to positive comments from the customers.

‘Then one day I got a letter from the council saying they had been a complaint by somebody and it wasn’t in keeping with the area.

‘Just one person complained so the council had to follow it up. I later found out that I should have got planning permission but I didn’t with the other one. 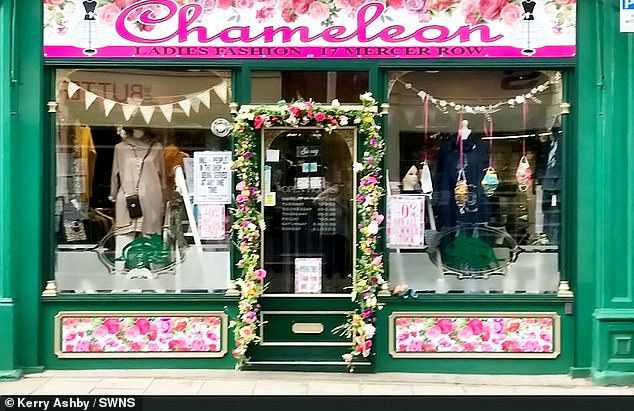 ‘I didn’t even know that the building was in a conservation area and that is the excuse they used for telling me that it was basically too colourful.

‘They did say that I could put in for a respective planning permission but I wouldn’t get it.

‘Consequently I’ve had to remove the sign and put another plain sign up which is just boring.

‘I’m really upset about it as it looks bland now compared to how vibrant it looked.

‘I had seen what shops in places like Stratford-upon-Avon had and they were similar and looked nice.

‘I’m very disheartened because when you go around the country there are lots of places and market towns that are bright and lively whereas Louth is stuck in a time warp.’ 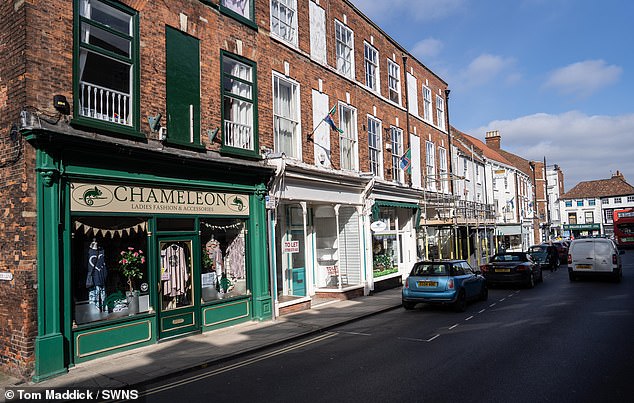 The store has now removed the flower archway and rose-patterned décor and returned to the original beige background with dark green lettering.

A spokesman from East Lindsey District Council said: ‘As the premises is a Listed Building and it is situated in a Conservation Area, there are limitations as to what is acceptable because the fabric of the building needs to be preserved so that the character and any special or architectural features are protected.

‘We did provide advice to the owner as to what schemes would be acceptable and offered the option for alternative designs to be submitted directly to us to see in advance so we could advise if they were acceptable or not, before anything more was ordered or purchased.

‘The owner submitted a few different schemes and we considered these and advised which were acceptable.

‘The favoured design was then purchased and it is now displayed on the shop front. This has resolved the breach of listed building control.

‘No formal action was necessary as the owner co-operated with our requests and voluntarily changed the sign.’