Nothing says celebration quite like champagne. The region that gives the drink its name makes a fascinating place to visit, with its corduroy-striped vineyards, endless miles of underground cellars and passageways (125 miles beneath Reims alone), and an intriguing past, dating back to Roman times.

Whether you want to focus on the fizz or add a side serving of history, we have the lowdown on which of the hundreds of champagne houses are best to visit, and how to make the most of Reims and Épernay, the champagne ‘capitals’, and their surroundings. So let’s raise a glass to the end of lockdown – and plan that celebratory trip! 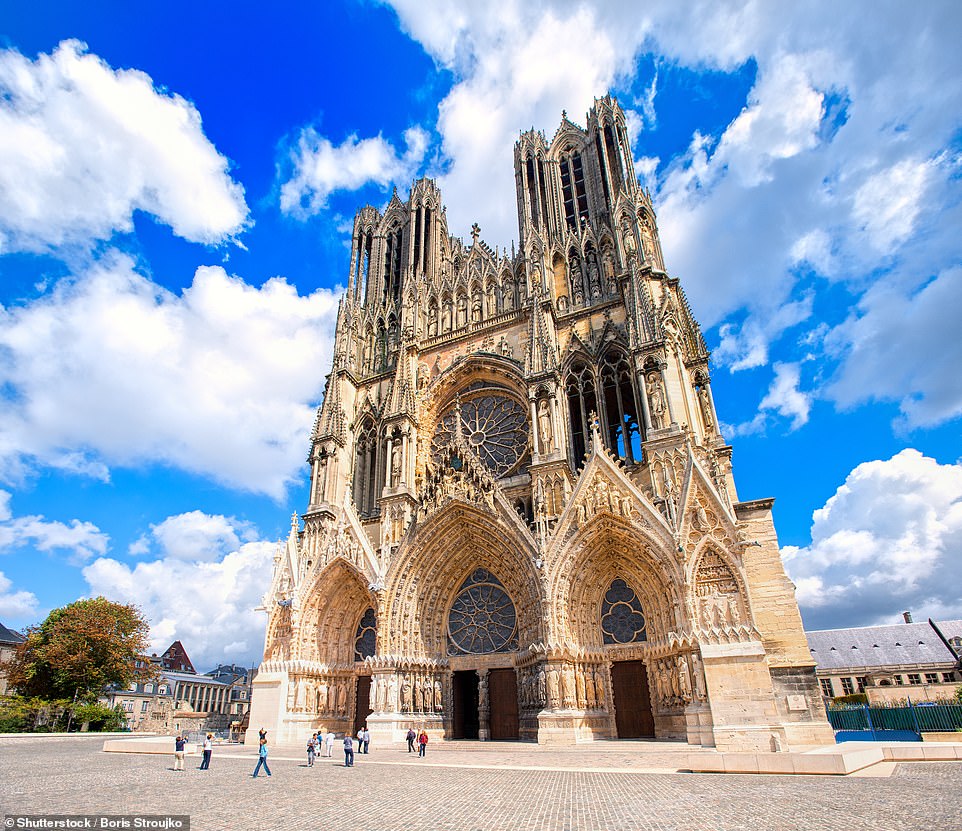 Reims cathedral, where most of France’s kings were crowned. It features Marc Chagall stained-glass windows

Let’s be honest: you’re here for the bubbles. But before you start sipping, get a shot of history at Reims cathedral, where most of France’s kings were crowned and which today features Marc Chagall stained-glass windows (look for the one featuring vines).

Post-coronation banquets were held in the Palace of Tau next door, home to the golden ceremonial chalice, ermine robes and Charlemagne’s talisman, a rather gaudy necklace found when the emperor’s body was exhumed.

A 20-minute walk across town takes you to the Basilica St Remi, with its magnificently carved tomb of the saint who baptised Clovis, the first king of France, in about 496.

Now you’ve earned some fizz, so it’s convenient that Taittinger’s champagne house is just up the road, with some interesting history of its own. Here, chalk mines created by the Romans quarrying for building material in the 4th Century were used 900 years later by monks from the St-Nicaise Abbey to store wine. 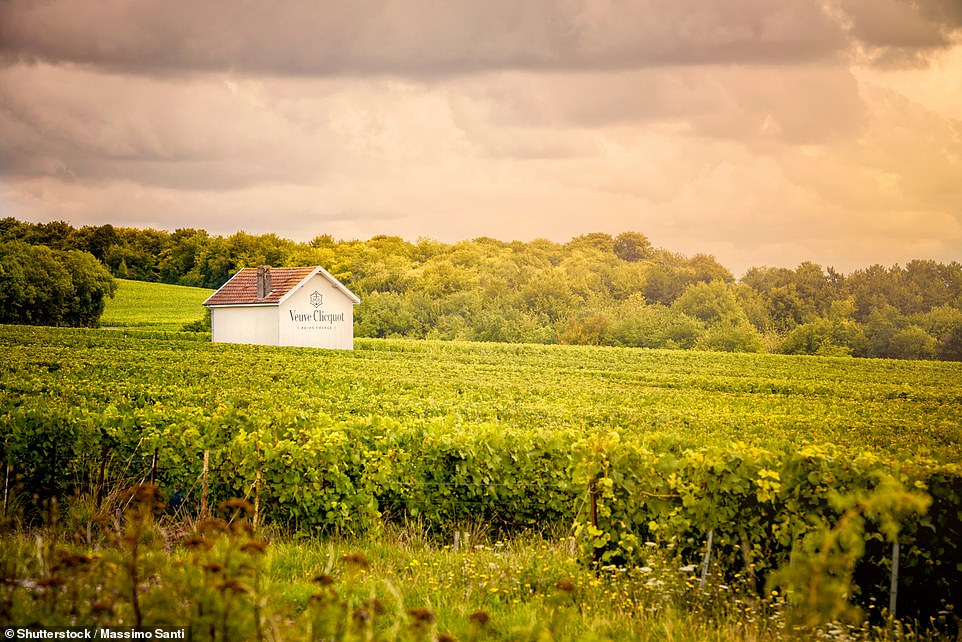 Support bubbles: The Veuve Clicquot vineyard in Reims. Veuve Clicquot was named after the widow who in 1805 became the first woman to run a champagne house 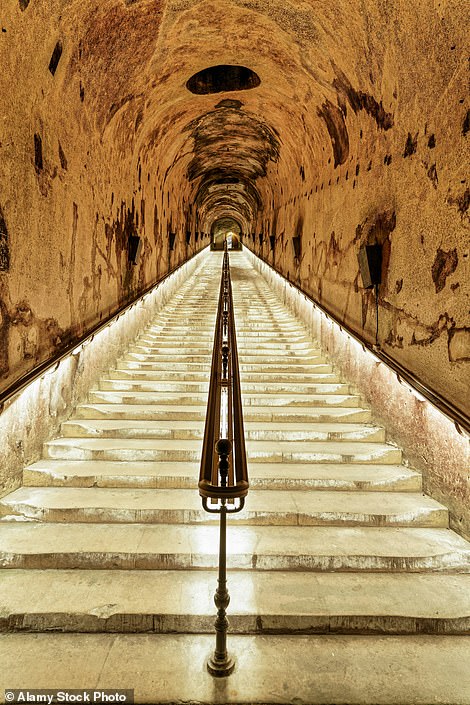 Stepping back in time: The grand staircase at Pommery that leads to 11 miles of ancient cellars beneath Reims

Spot the staircase from the cellars to the sacristy, three abbey doors and a St Jean the Baptist statue in the crypt; underground passageways apparently lead to the basilica and the cathedral. Look for First World War graffiti on the walls – like other champagne cellars, it was used for shelter, and had a wartime hospital and school. A trio of big-name champagne houses near Taittinger are both historically important to the drink and offer excellent visitor experiences. Expect to pay €25 for a champagne tour, with one tasting (taittinger.com).

Veuve Clicquot was named after the widow who in 1805 became the first woman to run a champagne house. Their excellent tour lets you sniff the differences between the three grape varieties used in champagne (pinot noir, pinot meunier and chardonnay) with the aid of aromas puffed into the air.

Vranken-Pommery was also run by a widow. On realising that we Brits prefer less sugar in our champers, Madame Pommery instructed her cellar master to make Pommery Nature, the first brut in the history of champagne, in 1874. The 11-mile underground labyrinth of cellars reached via a monumental staircase is decorated with underground chalk reliefs, portraying Bacchus, Roman god of agriculture, wine and fertility, and his cohorts.

More contemporary art is on show at Ruinart, one of the first champagne houses, dating from 1729, which invites a different artist every year to create works inspired by wine. Both its cellars and Pommery’s are also in Gallo-Roman mines – the importance of Reims to the Romans can be seen from the ornate archway the Porte Mars on the Place de la République. Nearby indoor market Les Halles du Boulingrin has plenty of places to refuel. Try Le Bocal for seafood plates at about €8 each, or Les Caves du Boulingrin. If you would rather avoid tourist traps, head instead to the Café du Palais with its Art Deco ceiling and tuck into a croque monsieur with truffles (€13).

A short walk away is the Continental Hotel, which not only serves good food in a restaurant with a cool metallic bar and impressive ceiling, but which has some seriously swish bedrooms from €140 (continental-hotel.fr). 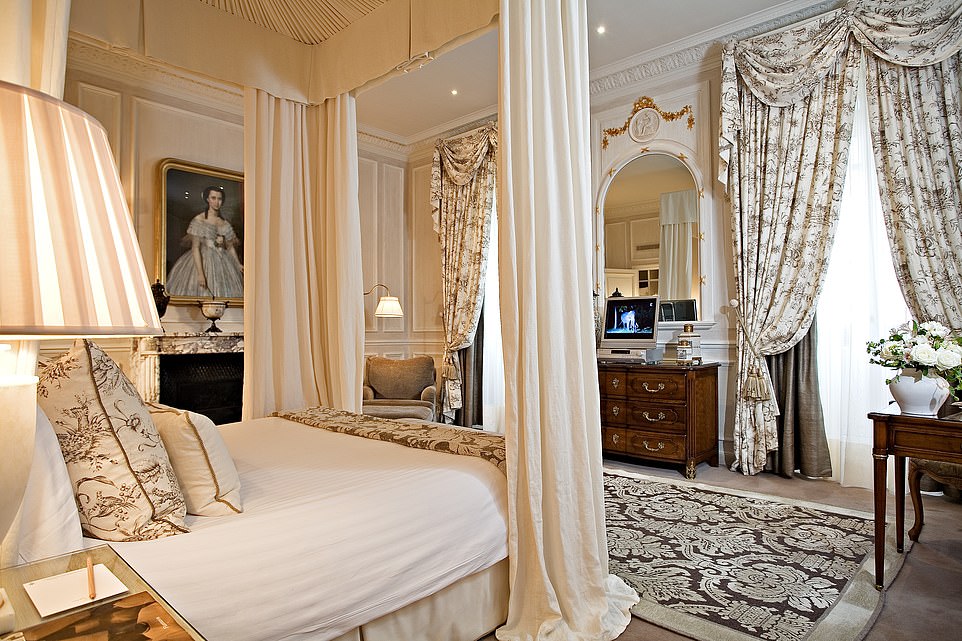 A room at Les Crayères, which has two Michelin stars and is within walking distance of Pommery, Taittinger, Veuve Clicquot and Ruinart

For a blow-out break, book either L’Assiette Champenoise or Les Crayères – the former has three Michelin stars and the latter two. It’s all contemporary cool at L’Assiette, with rooms from €285, a ten-minute drive from the city centre (assiettechampenoise.com).

Les Crayères is within walking distance of Pommery, Taittinger, Veuve Clicquot and Ruinart. Rooms from €350 (lescrayeres.com).

A budget option is the modern, comfortable Hotel Campanile Reims Centre with doubles from £63 (reims-centre-cathedrale.campanile.com). 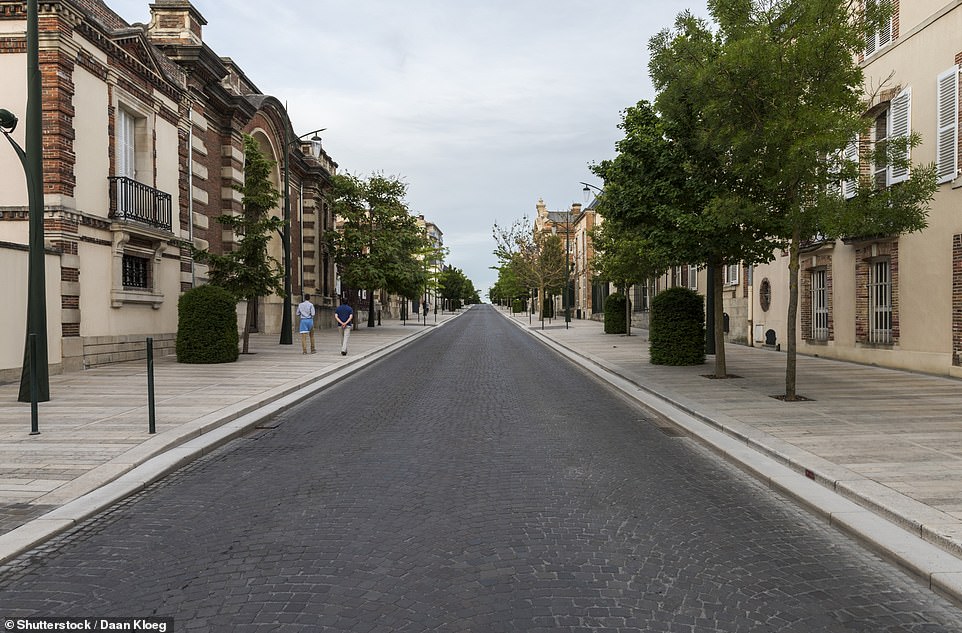 Once known as the Faubourg de la Folie (Suburb of Folly), Épernay’s Avenue de Champagne is now a Unesco World Heritage Centre site thanks to the magnificent champagne houses lining the half-mile strip. It’s a who’s who of famous labels, including Moët & Chandon, Perrier-Jouët and Martel, meaning you can indulge in the world’s poshest bar crawl.

Moët & Chandon is a good place to start for a classic cellar tour: it has 17 miles of underground cellars. Mercier includes a train ride through its 11 miles of galleries with chalk reliefs (look for the scantily clad statue of Miss Mercier holding a glass – scandalous at the time). Marvel at the ginormous oak barrel that took 24 oxen to pull to the 1889 International Exposition in Paris as part of Eugene Mercier’s publicity stunt. The following year, he offered trips above the city in a Mercier branded hot-air balloon; today, you can rise above Épernay in a captive balloon.

For something even more special, try the art of sabrage – cutting the head off a champagne bottle with a sabre – at the other end of the road from Mercier at Comtesse Lafond, which gives lessons along with tastings in the ornate chateau.

There’s no need to leave the Avenue de Champagne to eat or sleep. One of the best places is Les Suites du 33 at Champagne de Venoge, which has tastings with tapas in its attractive stables bar, a chateau to tour and four contemporary suites in the former guardian’s house. Doubles from €235 a night (champagnedevenoge.com). 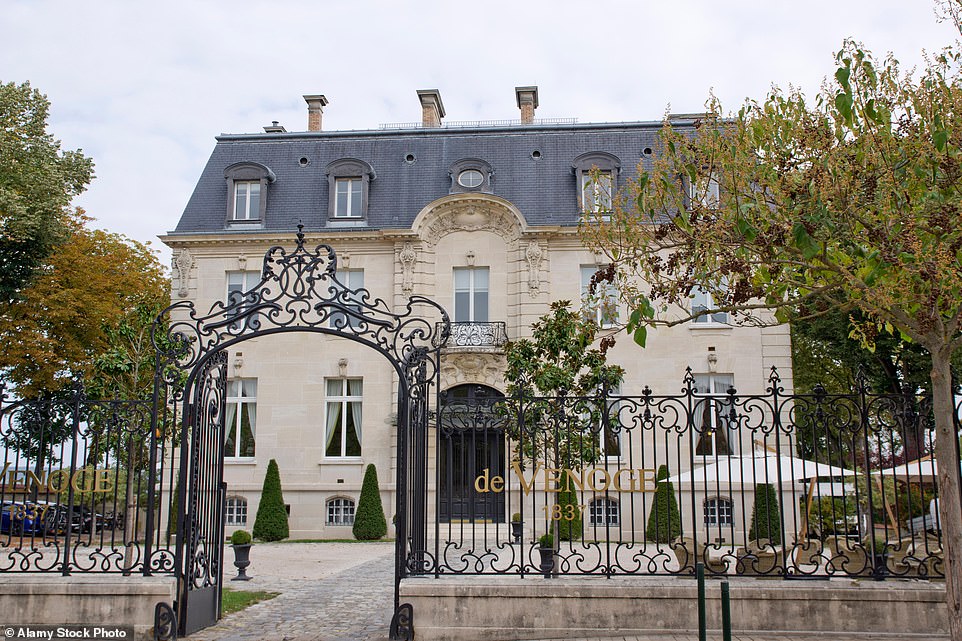 The Hotel de Venoge on Avenue de Champagne in Épernay. It has tastings with tapas in its attractive stables bar, a chateau to tour and four contemporary suites in the former guardian’s house

Just around the corner from the avenue is C Comme, a gorgeous little champagne shop-cum-bar, with an atmospheric musty cellar and modern tasting room that spills out on to the pavement in the summer. Try four glasses for €26.60, accompanied by light bites such as champenoise pâté with grapes (€8.50).

For something more substantial, La Table Kobus on rue Dr Rousseau serves delicious food such as prawns with celery remoulade and truffles in a restaurant with ornate ceiling and modern furnishings. Two courses €30 to €33.

If you’d rather stay outside town, family-run Voirin Jumel in the premier cru village of Cramant (champagne-voirin-jumel.com) not only sells delicious champagne for €18.50 a bottle but has pleasant (albeit small) B&B rooms from €54.

At the other end of the scale, Royal Champagne, in rolling vineyards just outside Épernay, has a 25m pool and spa, an excellent rooftop restaurant, and rooms from €485 (royalchampagne.com).

Tour its sister company, biodynamic producer Leclerc Briant, which uses a gold barrel and terracotta ‘eggs’ to mature its wine. Some of its champagne bottles are matured for 15 months in the sea to add depth to the flavour. 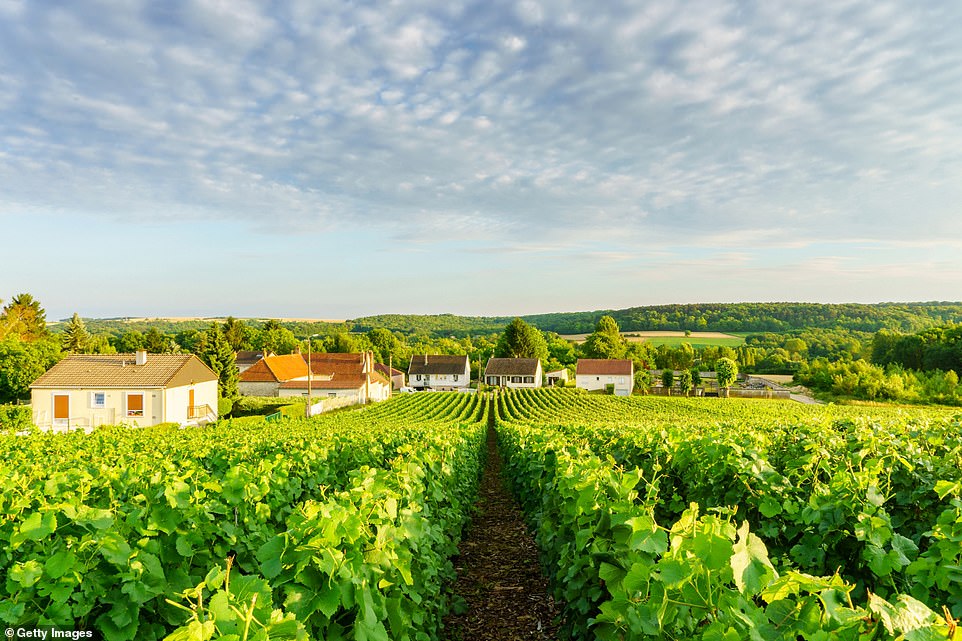 A vine romance: A vineyard in the Montagne de Reims fields

If you’re travelling by car, be sure to explore the area between Épernay and Reims – the Montagne de Reims, skirted by vineyards, and delightfully named villages such as Dizy and Bouzy. Start where it all began in Hautvillers, the so-called Cradle of Champagne and one of France’s prettiest villages. It was in the hillside Abbey of Hautvillers that the 17th Century cellar master Dom Perignon supposedly called out to his fellow monks ‘come quickly, I am tasting the stars’ on sampling his first fizz.

While he didn’t invent it, he did refine its production, with the help of Dom Ruinart. Both their tombs are in the church.

For your own taste of the stars, look in on local producer G Tribault. Or small champagne producer La Chevalée will give you a glass of its Pierre Fedyk label when you check in to one of the four modern rooms in earthy tones. 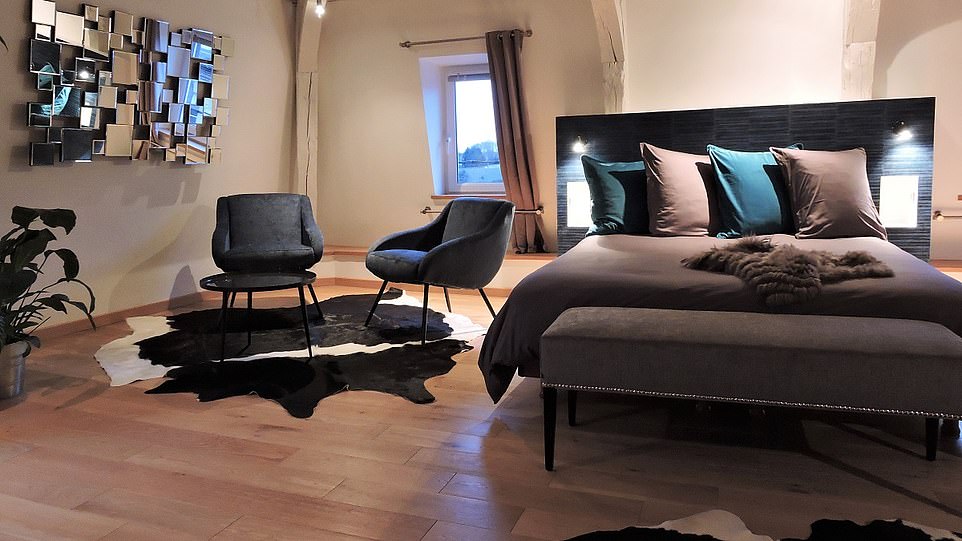 One of the four rooms in earthy tones at small champagne producer La Chevalée, where you can enjoy a glass of its Pierre Fedyk label

There’s a pool and you can rent electric bikes to explore. B&B from €125 (champagne-fedyk-chambres-hotes-hautvillers.com). Be sure to visit the restaurant and shop Au 36, which serves plates of delicious local specialities alongside its champagne.

Rested and refuelled, discover some of the more unusual sites and activities in Champagne.

West of Hautvillers, a guided quad bike or buggy tour will whoosh you through a sea of vines and stop at the First World War memorial at Dormans and at the 82ft statue of the 11th Century Pope Urban II in his birthplace of Châtillon-sur-Marne. Climb up and peer out of the hole in his armpit (festi-vallee51.fr).

North-east of Hautvillers, a lighthouse, the Phare de Verzenay, presides over the vines some 186 miles from the ocean. Originally built as a publicity stunt by Joseph Goulet in 1909 to advertise his champagne, it offers a fantastic view from the top of its 101 steps. It was an observation post in the Second World War. 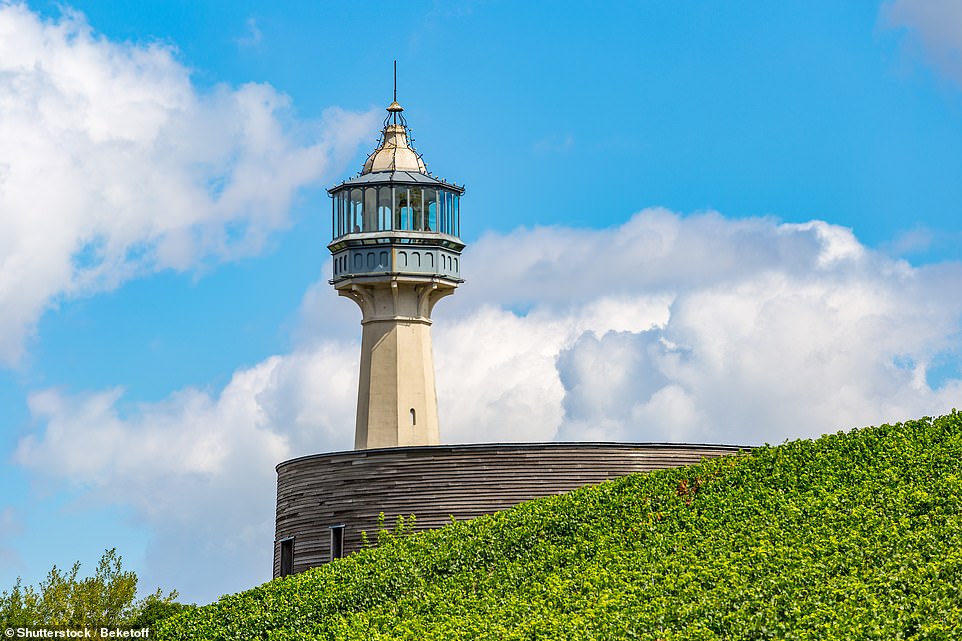 The Phare de Verzenay lighthouse, which presides over vines some 186 miles from the ocean. It offers a fantastic view from the top of its 101 steps

If a village walk round Verzenay sounds a bit tame, try the treetop activity course at the nearby forest of Verzy, then celebrate your survival at the slick Perching Bar, reached via a series of suspended bridges. Beautifully created around an old oak tree, it features hanging chairs with suspended champagne buckets by their side.

Make a lunchtime pitstop at Michelin-starred Le Grand Cerf in Villers-Allerand and enjoy a weekday lunch menu for €39, including farm chicken in champagne sauce (le-grand-cerf.fr). The same price will give you three delicious courses at the Château de Sacy served in a gold and black dining room with superb views across the vines to Reims, and elegant bedrooms from €250 (chateaudesacy-reims.fr).

If you’d rather self-cater among the vines, Cottages Antoinette in Chigny-les-Roses has three stylish wooden cabins with beds on a mezzanine level.

The owner, Antoinette, has created a village tour taking in local producers that can be visited on foot. There’s a hot tub with vine views and walks in the forest behind. From €200 (cottagesantoinette.com).