If your doctor broke the grim news that you had only one year of good health left, what would you do? Take the holiday of a lifetime, write your memoirs, plan a family celebration – or maybe all of those?

When pub landlord Simon Aylett, 59, faced that question he had only one answer – take a 2,000-mile ‘swansong’ bike ride to the Southern tip of Europe towing his bed behind him.

When his two-month adventure to Sicily was over, he returned to his home near Rye in East Sussex and steeled himself for the worst. But now a revolutionary drug trial has given grandfather Simon a new lease of life. So on May 30, he is off again – this time for a 4,500-mile bike ride around the entire coastline of Britain, including Northern Ireland. 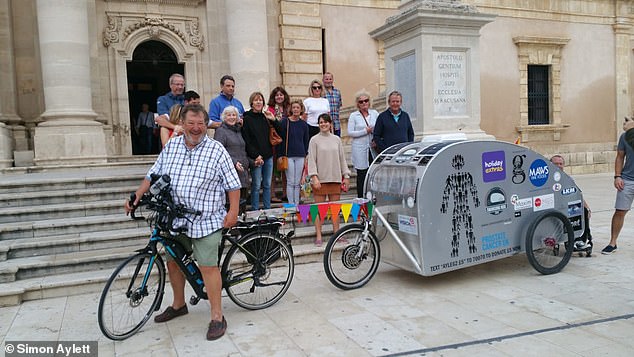 Simon’s spirit of adventure was born out of a prostate cancer diagnosis nine years ago. After years of treatment, including chemotherapy and having the prostate removed, the cancer continued to spread.

He said: ‘At the end of 2017, my oncologist sat me down and told me that I had about 12 months of reasonable health left until the cancer that I have been fighting would gain the upper hand.’

‘I remember sitting in the car after the meeting with my wife Sarah and us both feeling a tangible sense of complete shock. We had already been spending the savings going on lovely travels, but the “official” announcement really brought it home how precious time is. Time with loved ones.’ 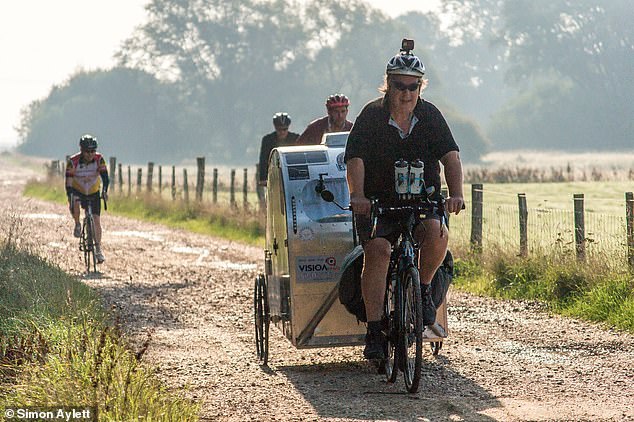 Riding shotgun: Friends and family accompany Simon on the route to the English Channel

The couple discussed ‘bucket list’ ideas. Simon said: ‘I told her I would love to see a J class yacht being sailed in anger. Sarah quickly found out that four or five J Classes would be racing at Les Voiles sailing regatta is St Tropez. And I came up with the idea of cycling to it… not sure why.

‘I then decided that the South of France wasn’t far enough, so went for Syracuse in Sicily, about as far south as you can ride in Europe, and also a regular haunt during childhood holidays.’

Simon and son Ollie set about building an aluminium teardrop caravan, known as the velopod, in his shed, kitted it out with a bed, named it the Swansong Ride, attached it to his e-bike and set off in 2018 all the way to Sicily to raise cash for Prostate Cancer UK. 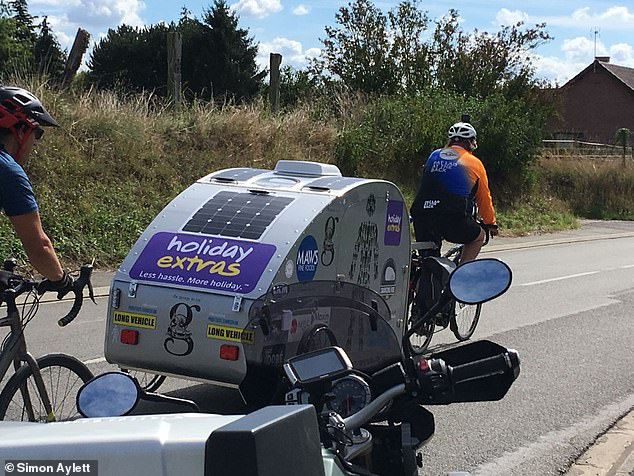 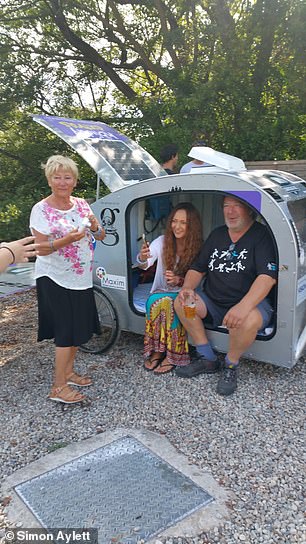 Cheers: Simon enjoys a farewell beer before his trip to Sicily

There were plenty of adventures along the way.

North of Chalons-en-Champagne in northern France the front wheel was ripped away from the pod. A weld had sheered. His son Toby arrived eight hours later to help him.

Simon said: ‘What started as the worst day turned out to be quite pleasant, enjoying some good company and the fruits of Chalons’ bars and restaurants.’

The next day Toby took the pod back to the UK for repair and Simon continued his journey with just his bike.

His real worst day, when he almost gave up, came later.

He said: ‘I was pushing south without the pod, just me and my bike. It was a healthy 32 degrees in the shade.

‘I arrived at a campsite, having not eaten lunch and having run out of water, at around 4pm after cycling for seven hours. The campsite was full.

‘I pushed on looking for anywhere to stay. After another hour in the saddle, I still hadn’t found anywhere and my bike battery gave up the ghost. I had ridden 90 kilometres [50 miles] without eating anything and I hadn’t drunk anything for about three hours.

‘Tired, exhausted, dehydrated, I rang Sarah. I’ve had enough. I’m coming home. It’s all too much.

‘Another 20 kilometres [12 miles] with no electric assist I stopped at a bar, the Au Petit Pari in Arrigny. The lovely patron could see my distress and found me a little gite nearby where I stayed for two nights.’

After emergency repairs in the UK, the velopod was put into a van and wife Sarah drove through France to deliver it to Simon for the last leg of his trip through Italy.

The best day was the culmination of two months’ cycling and eight months’ planning when he arrived on the Sicilian island of Ortigia in the city of Syracuse.

He said: ‘I remember cycling over the bridge on to Ortigia and finding my way to the Piazza Duomo and suddenly realising that I had done it. A couple of hours later Sarah arrived, she had driven all the way from Rye. Over the next 12 hours, 24 members of the family and close friends arrived and stayed for four or five days. It was probably a record take for the local hospitality trade at the end of October.’ 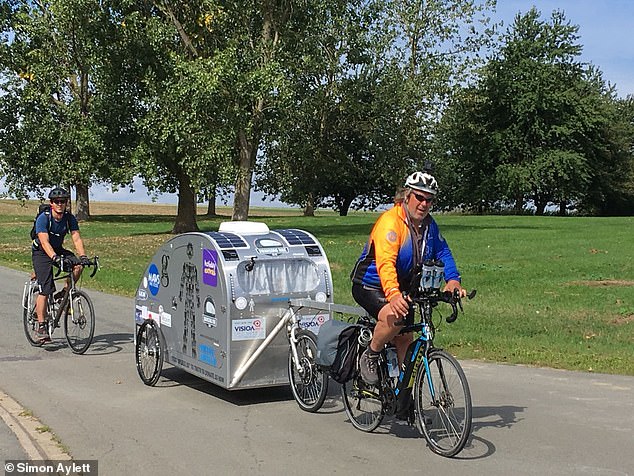 On the road: Simon is joined by son Ollie in Northern France 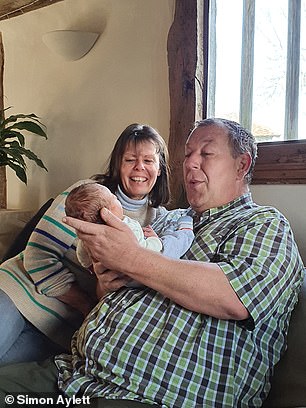 Bundle of joy: Simon and Sarah with baby Phoebe – ‘I am determined to hear her say “Grumpah” before I go’

Simon arrived home, having raised £40,000, and assumed that his last adventure was behind him. But all that changed when he signed up for a drugs trial last year.

He said: ‘By the end of 2019, I was becoming quite unwell, and the armoury of medication was at an end. I had surgery, chemotherapy, radiotherapy and various forms of hormone treatment, all of which had worked for a while but had all been outwitted by the cancer.’

Then at the beginning of 2020, just as Covid-19 was appearing in the UK, he was accepted on to a phase 1 drug trial at The Royal Marsden Hospital’s drug development unit in Sutton, Surrey.

He said: ‘The bottom line is that a year later, I am still here! Better than that, I am feeling well and my PSA [prostate-specific antigen] score has been reduced to very low levels [prostate cancer can cause the PSA level to rise].’

Faced with the bonus of unexpected extra time, Simon and Sarah started making new plans. They became first-time grandparents to Phoebe in February.

He said: ‘We braved the outside world and went to meet this little bundle. The following day I found tears rolling down my cheeks. It is virtually certain that I will never see this little person grow up. But I am determined to hear her say Grumpah before I go.’

With foreign holidays uncertain, a new grandchild and Sarah still working as a nurse, the bucket list was a challenge.

Then Simon had another bright idea – an e-bike ride but this time a gruelling trip around Britain’s coastline.

The Marsden does an amazing job giving people like myself extra time, whilst continuously researching and trialling new potential cures

He said: ‘The actual mileage around the coast has been calculated by using the data lifted from Strava from an incredible lady called Kiko Matthews who did the ride in 2019, albeit clockwise.’ Simon plans to cycle five days a week and then rest for two. That will be four months altogether and 72 days in the saddle. Family members and friends are already planning their trips to meet him.

He has been spending the last few weeks taking 50-kilometre (31-mile) practice runs around Kent and Sussex with son Toby. And on May 30 he will attach the velopod, rebuilt by son Ollie, to his e-bike once again, head north and disappear for four months.

This time he is raising funds for the Royal Marsden Cancer Charity to help it research and trial new ways of fighting all cancers, not just prostate.

He said: ‘The Marsden does an amazing job giving people like myself extra time, whilst continuously researching and trialling new potential cures.’

You can donate here.

Simon’s cancer journey has been a tough one. After working as a manager and chef for the Savoy and Claridge’s, he realised a personal ambition 11 years ago when he became landlord of The Plough, a traditional country pub in the village of Udimore near Rye.

After a year, he and his partner took over another pub, The Union, in the centre of Rye and turned it into a steakhouse. 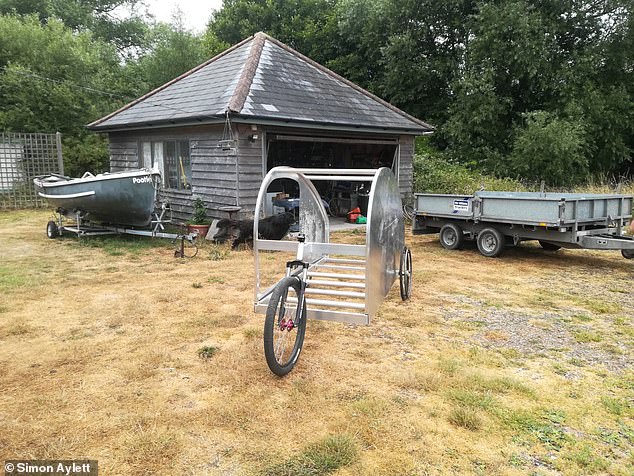 Bedroom on wheels: The teardrop caravan called the velopod was built in Simon’s shed

He said: ‘It was a success and we had a great little group starting. But then, having just turned 50, it was confirmed that the biopsy taken from my prostate showed signs of cancer.

‘Both my grandfather and my father had the same disease.’

After a year or so of monitoring a steady increase in the PSA score he had the prostate removed.

Simon said: ‘I remember coming to, and being visited by my surgeon who said “I got it out cleanly and encapsulated” with thumbs up.

‘Sarah, who is a urology cancer nurse specialist, explained to me that this was marvellous, as the surgeon was pretty sure that the disease had not spread. The entire gland came out and no visible signs that the tumours within it had erupted or escaped. A lot of patients reach this junction and that is the end of it, apart from the unpleasant side effects of the operation, including incontinence and erectile dysfunction.’

But for Simon, the PSA continued to increase and he started courses of hormone therapy and radiotherapy.

Then an MRI scan showed tumours in the lymph system near the small of his back.

He said: ‘The fact that the disease was now out and about in my body meant that it was metastatic or Stage 4. Sadly, with prostate cancer, once it has become metastatic, there is no cure! All that can be done is that it can be slowed down.’

He underwent 30 weeks of chemotherapy.

He said: ‘The side effects of all these treatments were significant. All my body hair fell out early on. Gone was the hairy gorilla, here was this smooth-skinned fellow. Then came the morning sickness, the continuous hot sweats, the growing of impressive breasts, the need for incontinence pads and the continuous chronic fatigue.’

As things were looking bleak, along came the unexpected bonus of the drug trial. So while the rest of us are looking forward to a beer in the pub or a hug with loved ones at the end of lockdown, Simon will be happier than any of us. He will be celebrating his life by setting off on a 63-mile trip to Margate in Kent, the first leg of his madcap marathon trip.