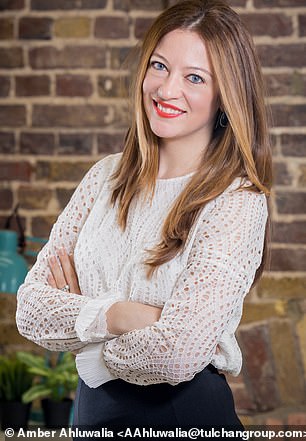 A retirement savings app is the latest technology firm to unveil plans for a London float, in a deal that could land its 35-year-old boss £135million. Pension Bee said it has hired advisers to help with the potential listing, which is expected to happen in the spring.

The firm is behind a smartphone app that lets people consolidate their pension savings into one pot and manage them digitally, with more than 400,000 customers signed up. Its decision to list follows similar moves by other tech firms this year, including food delivery app Deliveroo, reviews website Trustpilot and online greeting cards retailer Moonpig.

Trustpilot made its stock market debut yesterday with its shares listing at 265p each, giving it a value of £1.1billion. Pension Bee is reportedly aiming for a valuation of at least £300million – a figure that would make chief executive Romi Savova a multi-millionaire overnight.

She owns a 45 per cent stake that would be worth about £135million at that valuation. Jonathan Parsons, her co-founder and the firm’s technology chief, owns a 7 per cent stake, potentially worth £21million.

They are not the only ones to make a fortune from the boom in tech floats, with Hut Group boss Matt Moulding’s stake worth more than £500million after his company’s float, and Deliveroo boss Will Shu in line for almost £600million.

Savova was born in Bulgaria and raised in South Africa. After stints at Goldman Sachs and Morgan Stanley banks, she had the idea for the business after struggling to move her own pension pot when switching jobs. 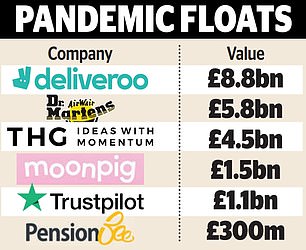 ‘I discovered it is actually a really tricky nightmare,’ she said. ‘The average person switches jobs around 11 times and so they leave a lot of their pension pots behind and sometimes the paperwork can go unopened for years, or they lose track of it.

‘So we decided to build a platform that would let people view their pension from the palm of their hand.’

She went on to found Pension Bee with Parsons in 2014 and it now manages £1.5billion worth of assets.

While running the company, she has also given birth to two children and has written about the difficulties female entrepreneurs face.

It plans to use money raised from the float to fund its expansion. The firm’s chairman is former Prudential UK boss Mark Wood, with former Pensions Advisory Service chief Michelle Cracknell also on the board.