On Friday afternoons in summer, Stockholm residents hop on ferries in front of the National Museum and stream out of the capital to the 30,000 or so islands that lie nearby.

You can check in to your own retreat at the Seglarhotell overlooking the harbour on Sandhamn, the furthest island out in Stockholm’s archipelago before it reaches open sea. Here you’ll find modern Swedish decor, plenty of windows so you can take in the views, and the chance to tuck into fresh seafood while overlooking the water.

Relax in the spa indoors or try the floating outdoor saunas and hot tubs. Otherwise join locals out cycling, walking or sailing. 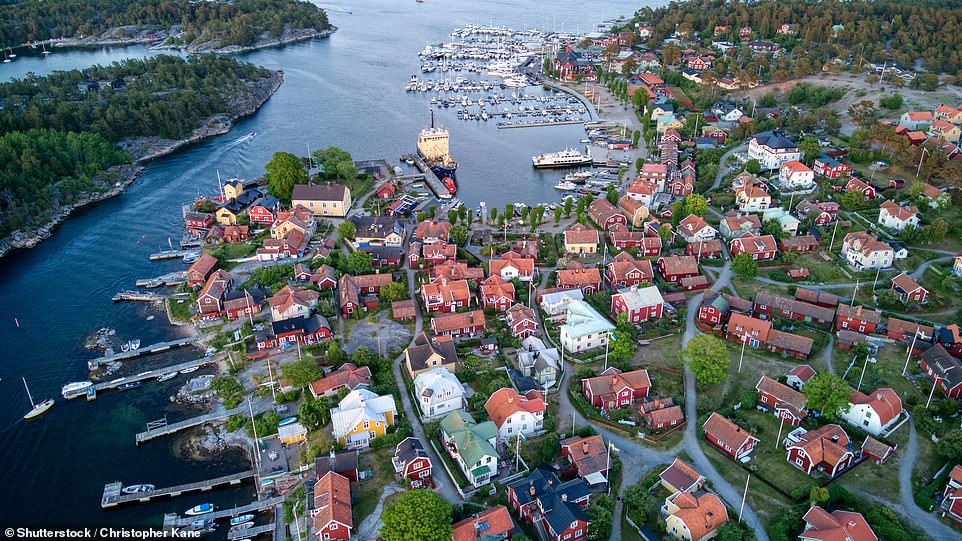 Sandhamn, pictured, is in Stockholm’s archipelago and is the furthest island out before the open sea

B&B costs from £132 a night (sandhamn.com). British Airways return flights from Heathrow to Stockholm from £130 (ba.com). Cinderella ferries operate to the island from June to October from £15 one way (stromma.com/en-se/stockholm/cinderella-boats).

Many Swedes will be able to regale you with happy tales of holidays on Gotland, as the island has long been a popular jaunt for families during the summer.

It’s some 55 miles east of the mainland so the easiest way to reach it is by ferry (three hours) or a flight from Stockholm in as little as 30 minutes. 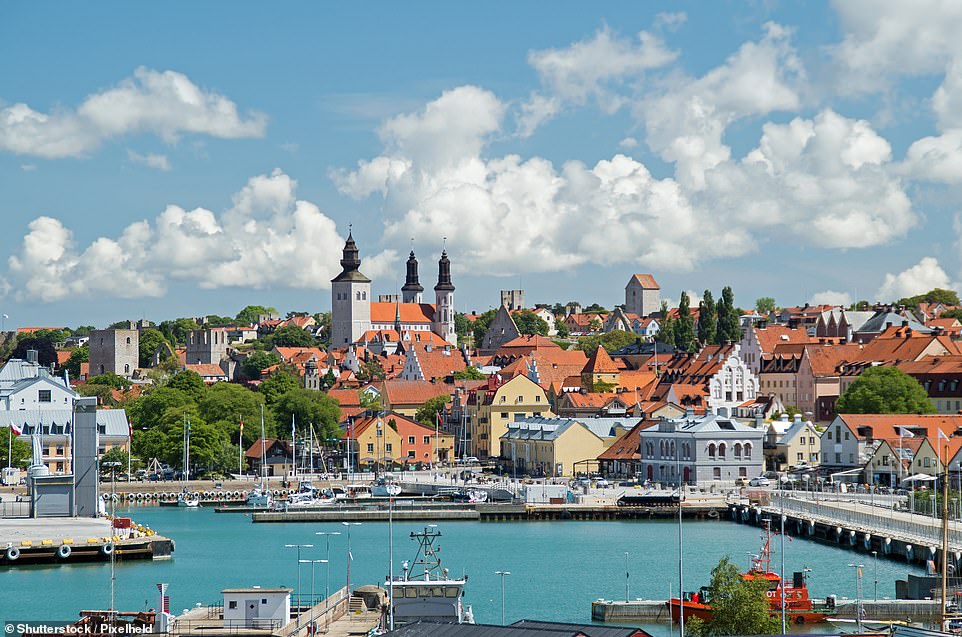 Visby, pictured, is a charming waterside town on the Swedish island of Gotland, which has long been a popular jaunt for Swedish families during the summer 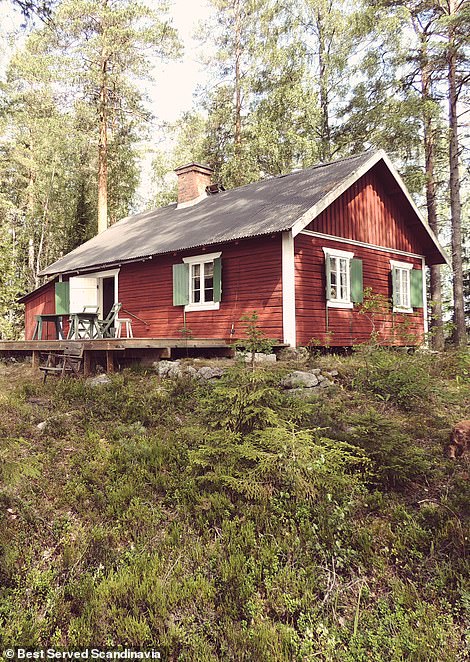 Cosy: Kabin, located on an island in Lake Fjarden, has a fireplace in the living room and a wood-burning stove in the kitchen

The capital, Visby, is a charming waterside town in which to linger, with cobblestone streets leading off its lively square and plenty of evidence of its medieval heyday. But it’s the lovely sandy beaches at spots such as Holmhallar in the south and on the east coast between Sjaustrehammaren and Ljugarn that are the real draw.

A week’s B&B in August, with car hire, at the Clarion Hotel Wisby and flights from Heathrow (via Stockholm) costs from £1,642pp (sunvil.co.uk).

If you long for somewhere far more intimate in Sweden, try a private island. The owners of appropriately named Kabin offer their chic two-bedroom cottage on a forested island in the middle of Lake Fjarden, a two-and-a-half-hour drive north of Stockholm, where you’ll be rulers of your domain – and it really is just you there.

The log cabin is the embodiment of cosy, Nordic minimalism, with painted wooden walls, thick duvets, a fireplace in the living room and a wood-burning stove in the kitchen. It’s the perfect place for curling up with a good book, canoeing, skinny-dipping and cooking the locally sourced organic ingredients provided. Watch a late summer sunset from the hot tub or relax in the sauna.

A five-day break costs from £1,125pp (two sharing) and includes two nights’ B&B in Stockholm, boat transfer to and from the island, two nights fully inclusive at Kabin and flights from Heathrow (best-served.co.uk).

The small island of Laeso in the channel between Sweden and Denmark has been described as ‘17 miles off the coast but 100 years away’. There are farms, forests, small towns and swathes of sandy beaches, and being pancake-flat (about 11 miles long and six miles across) with little traffic, it’s easily explored by bike.

Laeso is known for salt-mining and its half-timbered houses thatched with seaweed. One, dating from 1740, was restored last year and converted into a Scandi-chic holiday cottage (think wood floors and plump, white duvets) for up to 12 guests.

A week’s self-catering at the six-bedroom Seaweed House is from £1,880 (tanggaarden-skoven.dk). Access the island by ferry from Frederikshavn in Jutland. EasyJet (easyjet.com) flies from London to Copenhagen from £53 return. 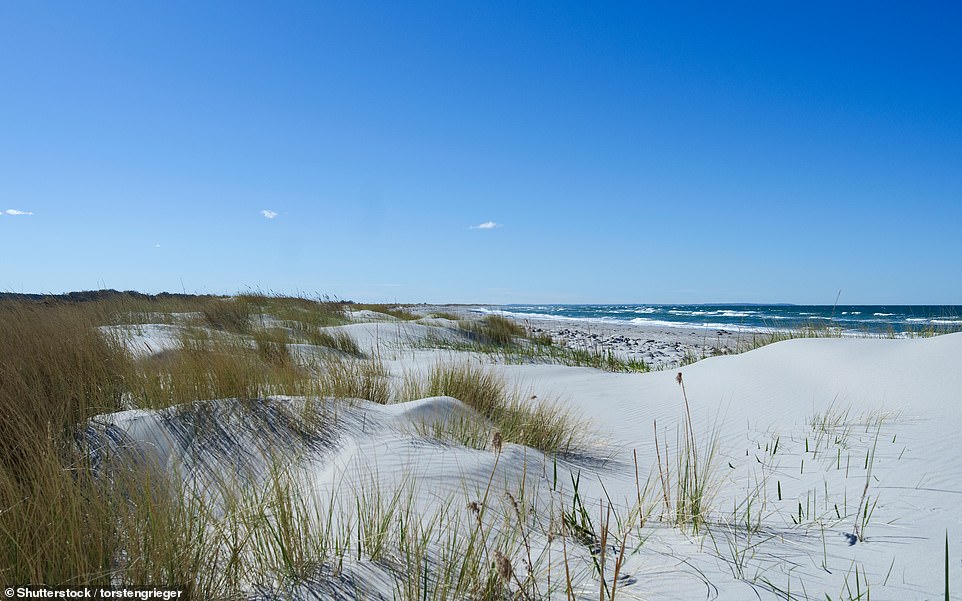 The small island of Laeso, in the channel between Sweden and Denmark, has farms, forests, small towns and swathes of sandy beaches, pictured

Here’s one for the pub quiz: how many islands does Finland have? Answer: an impressive 180,000 or thereabouts.

You can explore some of their tranquil beauty by houseboat, embarking at Jyvaskyla, a three-hour train ride north of Helsinki. Of course, it being Finland, your swish vessel comes equipped with a barbecue on the terraced deck and a sauna so you can warm up after taking a dip. Boat sizes vary so you can book as a couple, small family or larger group.

Five nights from May to October from £1,043pp (two sharing) includes return flights from Heathrow, return train journey to Jyvaskyla, two nights room-only in Helsinki and three nights on the houseboat (discover-the-world.com).

There are also a staggering 20,000 or so islands which lie off the coast of Finland’s second city, Turku – or Abo, as it’s known to the region’s mostly Swedish speakers. Although some of these are not much bigger than rocks, you can reach the main ones such as Pargas, Nagu, Korpo, Houtskar and Inio by ferry. 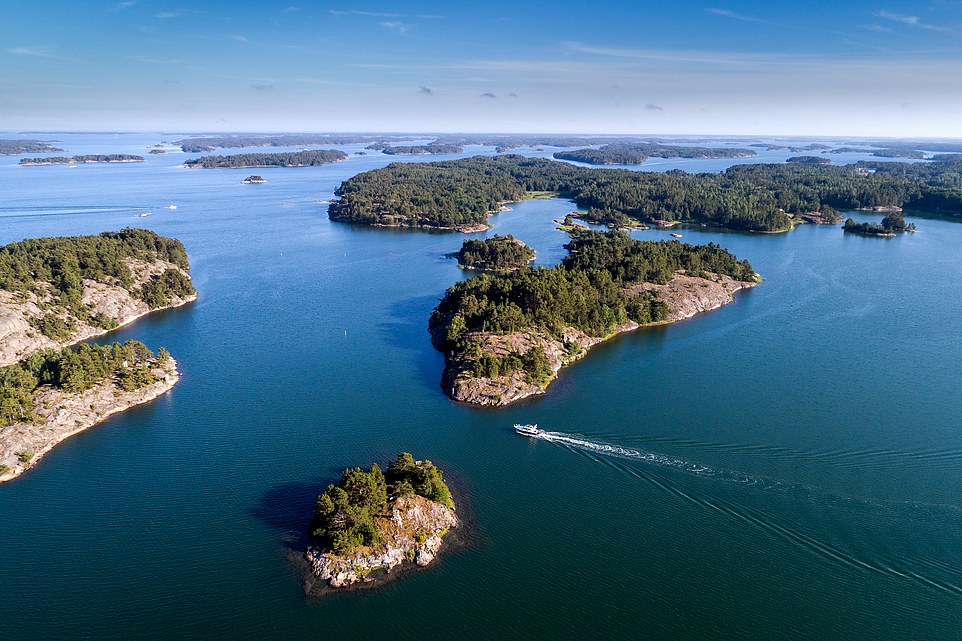 Rugged: The Turku archipelago off the coast of Finland has 20,000 islands harbouring temptingly tranquil spots

These are perfect spots for some peace and quiet, and a favourite is Korpo, where the Hotel Nestor was built on top of an old barn and named after the owner’s great-grandfather. Modern and chic rooms (B&B doubles from £79 per night) are all different sizes – there’s even one for a family of five (hotelnestor.fi). Its Back Pocket restaurant serves tasting menus that make full use of local ingredients. Finnair (finnair.com) flies from Edinburgh to Helsinki from £180 return, from where a hire car will get you to Turku in about two hours.

The Lofoten Islands are Norway at their most picture-postcard perfect, with tiny fishing villages dwarfed by towering mountains plunging into the sea. They are spectacular from any angle, but particularly imposing when seen from the water.

A week-long guided swimming holiday based in Storvagan, with a maximum group size of 12, takes you to idyllic spots with distances of one to three miles covered each day. There is a support boat in case you want to hop out at any point to relax. 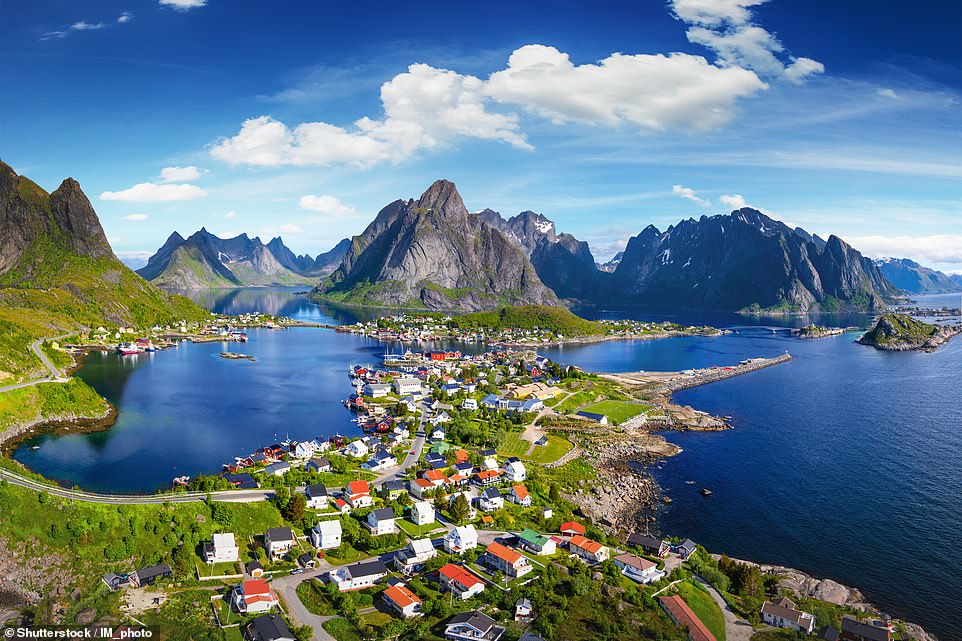 The spectacular Lofoten Islands have tiny fishing villages dwarfed by towering mountains plunging into the sea. Pictured is the pretty village of Reine

Thanks to the Gulf Stream, water temperatures above the Arctic Circle are not as chilly as you might think in summer – up to 15C (60F) – but, still, pack a wetsuit.

This trip starts on August 7 and costs from £2,425pp for B&B, lunches, guides and local transfers (swimquest.uk.com). Return flights from £415 from Heathrow to Svolvaer via Oslo (flysas.com).

Spitsbergen is Norway’s biggest island (280 miles long) and part of the vast Svalbard archipelago. It’s about 500 miles north of the Norwegian mainland, 600 miles from the North Pole, and polar bears outnumber inhabitants. With its breathtaking but inhospitable terrain, a cruise is certainly one of the best ways of experiencing the island. Expect to see some of its incredible wildlife including arctic foxes, walruses, whales and birdlife. 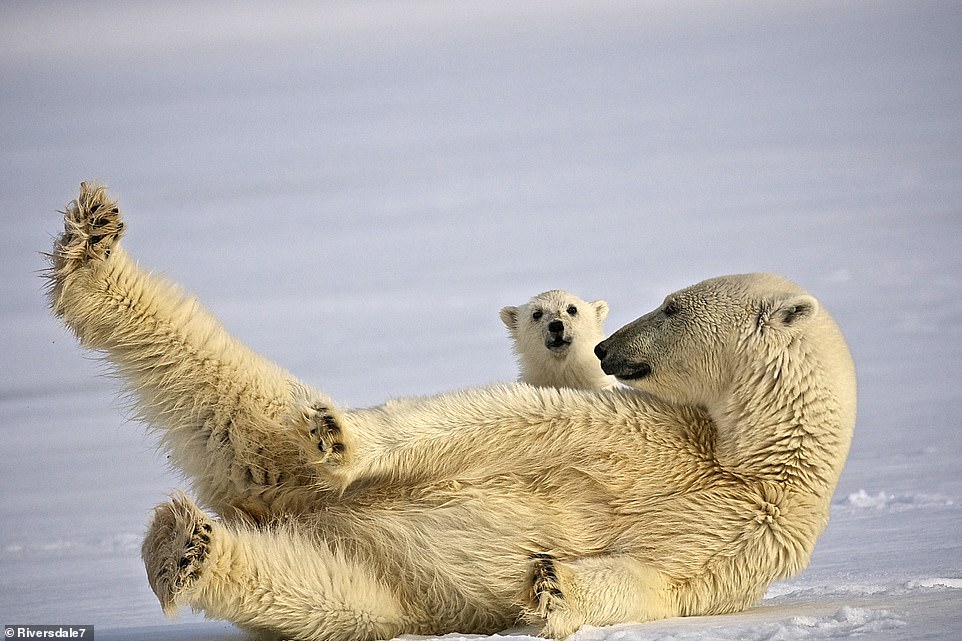 Polar stars: Bears outnumber people in Spitsbergen. The island is the biggest in Norway (280 miles long) and is part of the vast Svalbard archipelago

If you like to plan ahead, some operators are already offering trips for 2022.

A ten-day circumnavigation of Spitsbergen in September 2022 costs from £5,036pp (two sharing), all-inclusive with flights from Heathrow (hurtigruten.co.uk).

High above the Arctic Circle, Senja is Norway’s second-largest island. This paradise for hikers is a delightful mixed bag of sheltered coves, beaches and fishing villages, while inland there’s a wealth of mountains, lakes and forests to explore.

Regular wildlife sights include whales, orcas and eagles, so pack your binoculars. In high summer you’ll have 24 hours of daylight, and later in the season the chance to enjoy the Northern Lights. 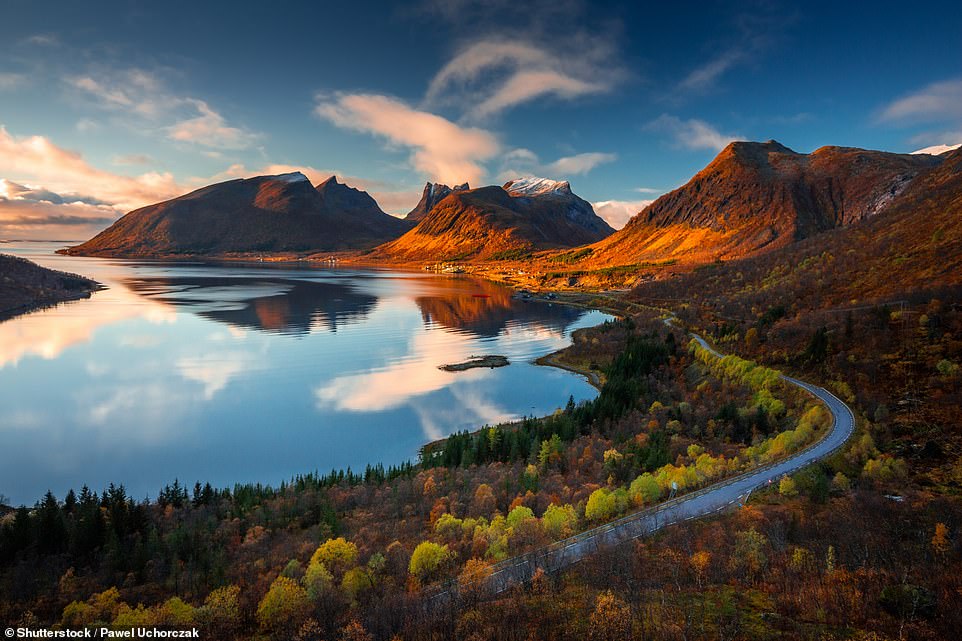 Senja, pictured, is Norway’s second-largest island. It has a wealth of mountains, lakes and forests to explore

Seven nights’ half-board accommodation with car hire, route notes and maps costs from £1,497pp, based on two sharing (inntravel.co.uk). Flights are not included but returns from Manchester to Bardufoss cost from £210 (flysas.com).

Families in search of an adventure might be tempted by a treehouse suspended high in pine trees on an island surrounded by a lake enveloped by more dense forest.

This Norwegian retreat, whose nearest village is Konsmo, is only for those who really like to get away. A floating bridge connects the island to the mainland, where there’s a sauna and a hot tub.

The treehouse itself sleeps five, is fully electrified and has a wood stove and canoes to explore the lake. 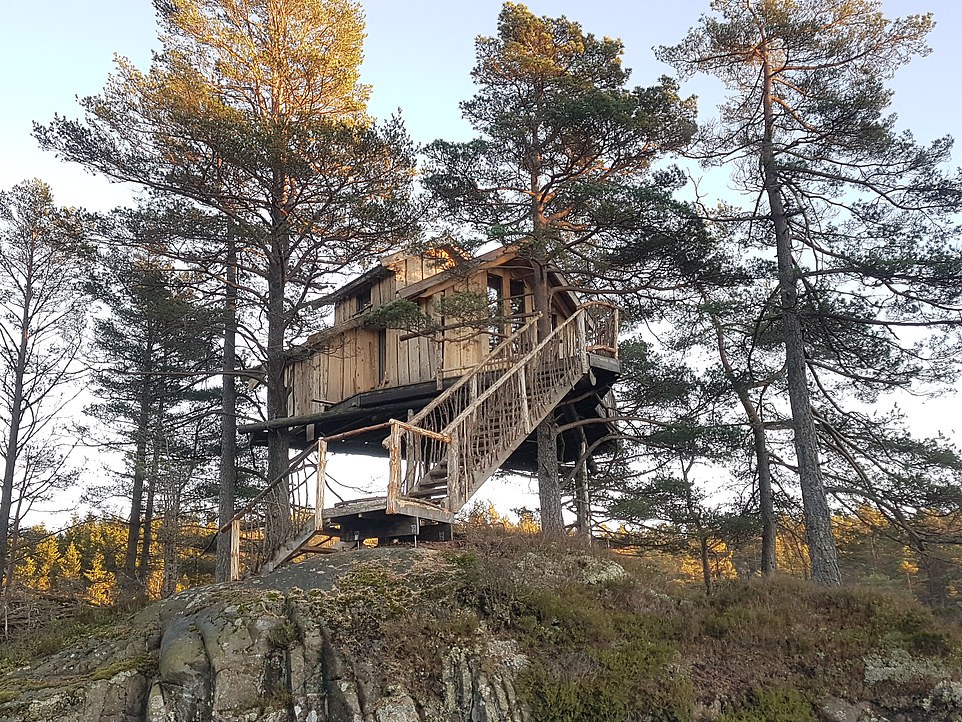 High life: The treehouse on the Norwegian island of Konsmo sleeps five and is fully electrified

The nearest airport is Kristiansand, an hour away, or it’s a five-and-a-half-hour drive from Oslo.

From £232 per night self-catering (canopyandstars.co.uk). KLM flies from Birmingham to Kristiansand via Amsterdam from about £170 return (klm.com).

If ever a land bubbled up out of the sea to stir the imagination and lend weight to tales of Norse gods and warriors, it’s the Faroe Islands.

Waterfalls plunge over sheer cliffs into the sea, snow-clad mountains pierce the clouds, and road tunnels disappear deep into hillsides painted vibrant green with blankets of moss and lead to lonely churches roofed with grass.

This archipelago between Shetland and Iceland (and belonging to Denmark) is for those in search of a feeling of utter remoteness. But despite their otherworldly air, the islands are easily accessible in summer with direct flights from Edinburgh that take less than an hour and a half. 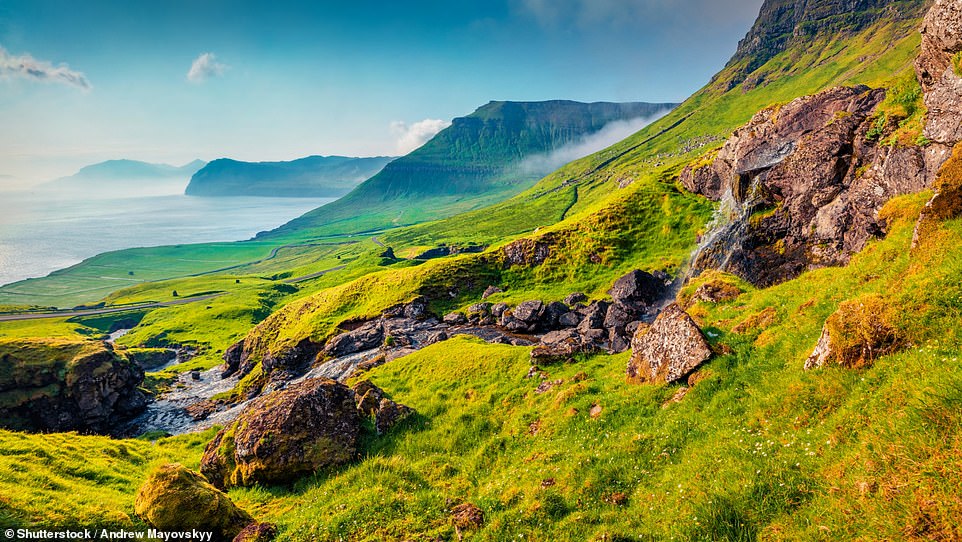 The main island of Streymoy in the Faroe Islands, an archipelago located between Shetland and Iceland that’s perfect for those in search of a feeling of utter remoteness 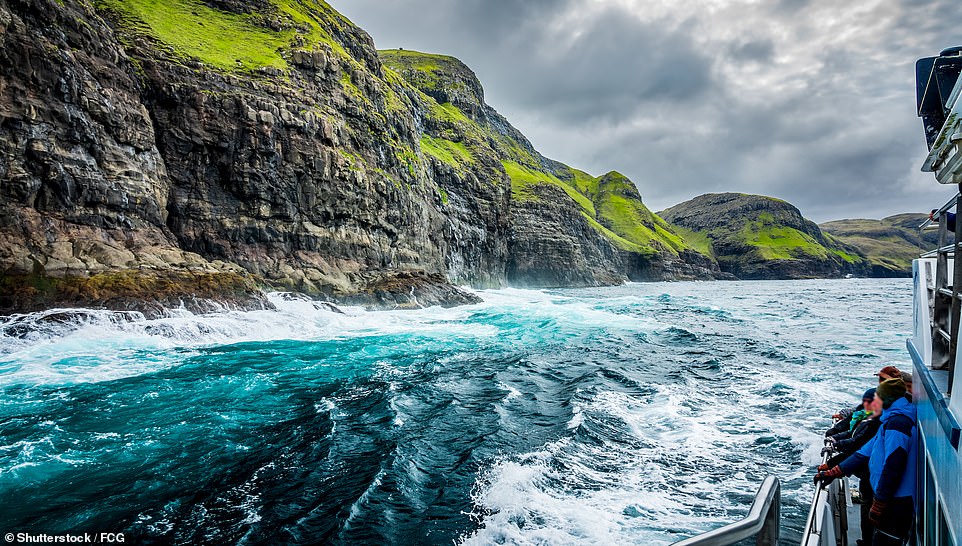 On a boat trip around the Vestmanna cliffs, pictured, in the Faroe Islands, there’s the chance to see spectacular colonies of puffins, guillemots and fulmars

There are 17 inhabited islands and the best way to explore is with a car. Set your satnav for the Michelin-starred restaurant Koks on the main island of Streymoy, for its 17-course tasting menu with meat and fish dishes either locally sourced or from the other Nordic countries – well worth it, even for a hefty £225 per person (koks.fo).

The islands are a sheer joy for hikers and birdwatchers, and it’s definitely worth booking a boat trip to see the spectacular colonies of puffins, guillemots and fulmars at Vestmanna where thousands of nests cling to cliffs rising hundreds of metres straight from the sea.