Nearly half of 25 to 44 year-olds are considering taking out income protection insurance to safeguard their monthly income as a result of the Covid pandemic, new research has found.

At a time when millions of people in the country have seen a decrease in the amount of money they take home due to lockdowns or being put on furlough, more have become interested in types of insurance that protect their income.

Around 48 per cent of people aged between 25 to 44 say the’re looking at income protection cover, while two in five said they were considering buying life insurance, insurer LV= has found. 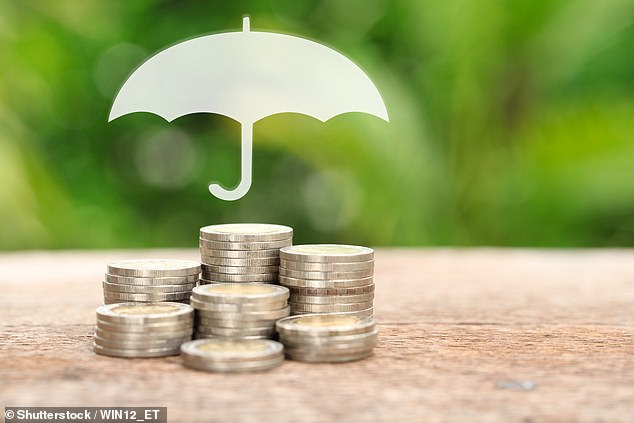 Income protection: More younger people are becoming interested in the cover as they are more likely than older peers to be struggling with the financial repercussions of lockdowns

Income protection insurance is designed to cover your salary if you can’t earn an income due to an illness or injury.

It’s different from life insurance, which pays out to your dependants when you die, or critical illness which pays out a lump sum if you receive a diagnosis for an illness that appears on a pre-agreed list.

Income protection has never been a best-seller – partly because it is seen as complex, more expensive and pays out on a monthly basis instead of as a one-off lump sum.

However, the survey by LV= of over 4,000 adults carried out in December suggests interest in the cover has risen, also among younger people, who are more likely than older peers to be struggling with the financial repercussions of lockdowns.

Debbie Kennedy, protection director at LV=, said: ‘The pandemic, lockdowns and furlough has caused a huge amount of financial damage to millions of households who are worried about maintaining a steady income.

‘The challenges of the coronavirus pandemic and further lockdowns have forced people to re-evaluate their priorities and spending habits to tackle short-term instability.

‘People are now more aware of the vital importance of their income and the vulnerability of their finances.’ 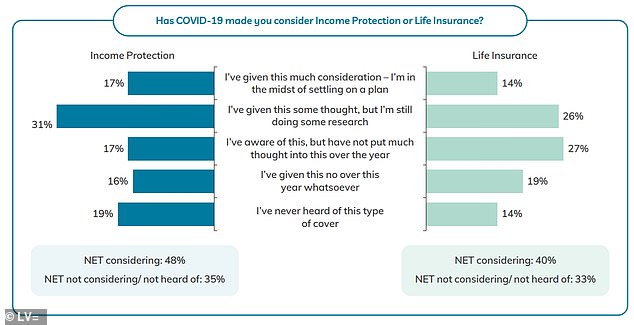 While more younger people are looking at income protection cover, nearly 20% had never heard of it, research by LV= shows 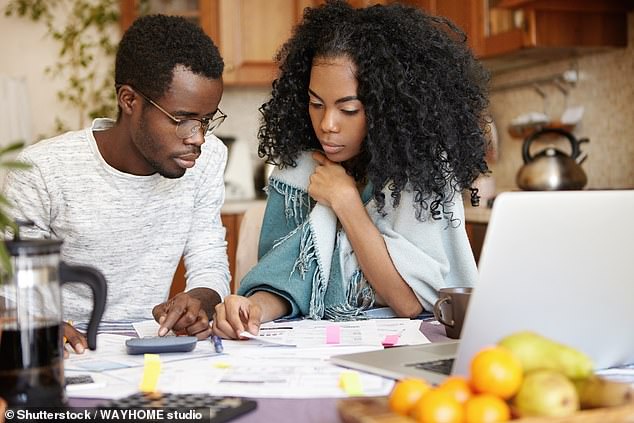 Money worries: Some 44% of 25 to 44 year olds surveyed said their financial situation in the last three months of 2020 had worsened since the summer months

These products remain a mystery for many

Research shows around 7 per cent of 25-44 year olds surveyed had already bought a protection insurance product in the last three months of 2020.

The rise in interest in types of insurance that protect income comes as many people’s finances have been hammered by the pandemic.

That is even more the case with younger people, who were more likely to work in industries that have had to close due to lockdowns.

At the end of last year, nearly half of Britons aged 18 to 34 said their finances in the last three months of 2020 were worse than they were over the summer, a bigger proportion than 36 per cent across all age ranges.

Meanwhile, some 44 per cent of 25 to 44 year olds said their financial situation had worsened since the summer months, with only 12 per cent saying things had improved financially, LV= said.

This is Money has teamed up with Cavendish Online to offer our readers the cheapest life insurance quotes available on the market.

You can get a fully underwritten quote online yourself, or speak to a fully qualified independent adviser who can compare life insurance and recommend the best option for you from a wide range of insurers.

Find out more and see what it would cost you.

And the outlook for the months to come is not much better – almost a third, or 30 per cent of 25 to 44 year olds, said they expected their finances to worsen in the next three months, with only 14 per cent expecting an improvement.

Separate research by the Financial Conduct Authority indicated that, as of October last year, around 30 per cent of Britons expected their household income to fall within six months – rising to 45 per cent of those who already had low financial resilience.

Meanwhile, a large majority of people, or around 85 per cent, said they were worried about their finances when thinking about the year ahead, according to another report by insurer Prudential.

As we enter ‘debt awareness week’, Rachel Springall of Moneyfacts, says: ‘The past 12 months have tested the financial resilience of consumers and their attitude towards how 2021 will pan out.

‘One of the purposes of Debt Awareness Week is to persuade consumers to be more open when it comes to money and to seek help if they are worried about their financial status.’

Will prices for these products go up because of Covid?

When buying income protection cover, premiums are either guaranteed or reviewable.

Insurer LV= said it’s too early to say what the long term impact of the pandemic will be on pricing.

‘Our life, critical illness and income protection contracts are long term, with premiums set (and often guaranteed) at outset, based on our assumptions of longer term mortality and morbidity and other associated factors,’ the company said.

‘The industry is still living with and learning from the immediate and longer term effects of Covid.

‘People are still dying and getting infected despite falling numbers caused by the current UK lockdown measures and the roll-out of the vaccine.

‘This is an area we will of course monitor and review, as with everything else this pandemic presents.’

THIS IS MONEY’S FIVE OF THE BEST PROTECTION INSURANCE DEALS