Millions of pounds in criminal cash has been frozen over the last three years as banks attempt to clamp down on a surge in money laundering carried out by teenagers and young adults who are often unaware they are breaking the law.

Figures from Britain’s biggest bank Lloyds revealed that more than three in five ‘money mules’ blocked from laundering money on behalf of criminals since 2018 were under 30, with 26 per cent aged 21 or less.

Some 88,000 bank accounts attempting to move £60million have been blocked since the bank launched its ‘mule hunting’ team in 2018, according to the data, which also covers customers of Bank of Scotland and Halifax, provided exclusively to This is Money.

Bank fraud chiefs have become increasingly concerned about the targeting of younger people by criminals during the pandemic who tempt them into laundering money through their bank accounts, usually through eye-catching adverts on social media platforms and the promise of easy cash. 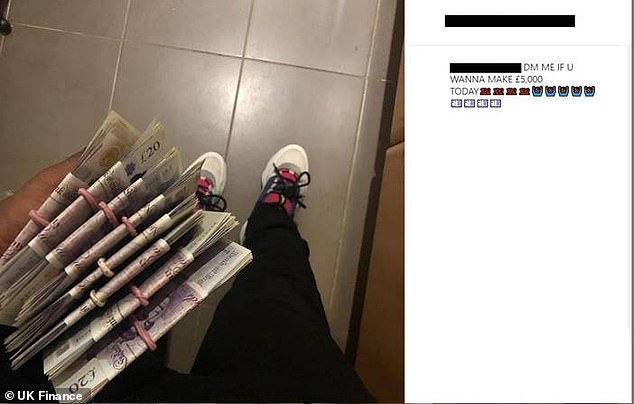 Although the number of instances of money muling fell in 2020 compared to the year before, cases involving people aged 21-30 rose 5 per cent to 17,157, accounting for two in five of all cases, according to figures released last week by trade body UK Finance and the fraud prevention service Cifas.

Money muling is when people agree to have money transferred into their bank account and then subsequently pass it on in an attempt to launder it on behalf of criminals, often unwittingly.

If this activity is discovered, accounts are frozen and those involved will find it hard to open another current account.

Katy Worobec, managing director of economic crime at UK Finance, said ‘generation covid’ were being preyed upon by criminals with offers of easy money and work at a time when young people are among the likeliest to have been left unemployed during the pandemic.

Social media adverts published on Facebook, Instagram and Tiktok and shared by UK Finance frequently show offers of quick and easy money and those posting them displaying high rewards and bundles of physical cash.

Lloyds Bank’s retail fraud director, Paul Davis, told This is Money: ‘The pandemic has opened a whole new door for fraudsters who are trying every trick in the book to get their hands on victims cash and using coronavirus to disguise their tactics.

‘The most common way they are targeting victims to become money mules is popping up on social media with offers of making fast cash by moving money from their account, using fake photos and profiles to lure people in.’

Banks want online fraud and scams to be included in the Government’s proposed Online Harms Bill, which would make social media platforms responsible for taking down such adverts, as well as those for fraudulent investments, which have cost Britons hundreds of millions of pounds.

£19million of funds carried through 43,000 accounts have been blocked since This is Money last reported on the issue last August, when we warned students bracing themselves for remote learning to beware of such offers of easy money.

The rise in money muling among younger adults, with teenagers as young as 14 targeted according to UK Finance, has been compounded by the fact many are unaware of the consequences of their actions.

‘Tempting offers that sound too good to be true probably are’, Paul Davis added, ‘so it’s important people think about the consequences like being left with no bank account, a damaged credit score and even prison – before biting off more than they can chew.’ 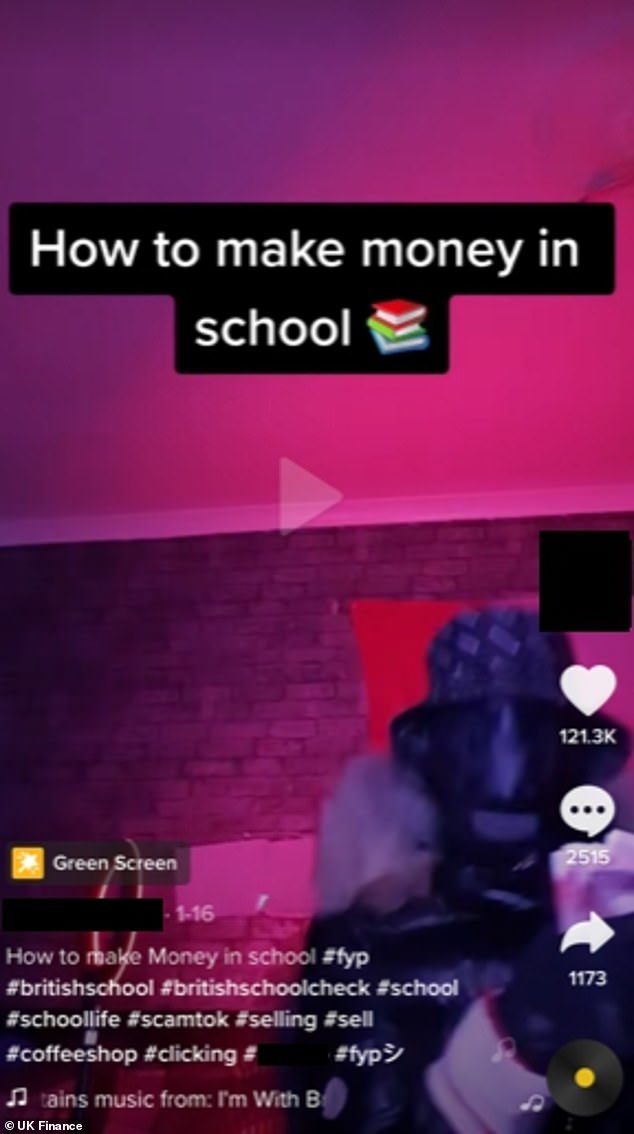 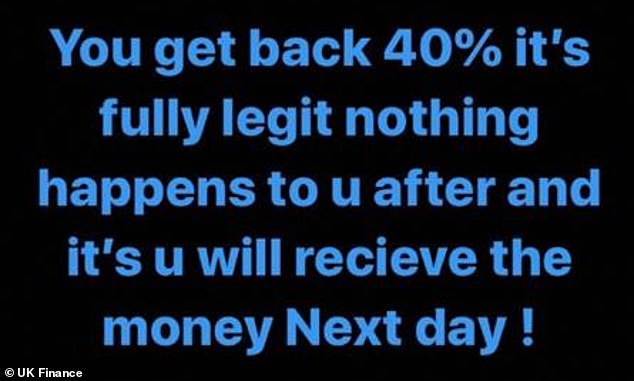 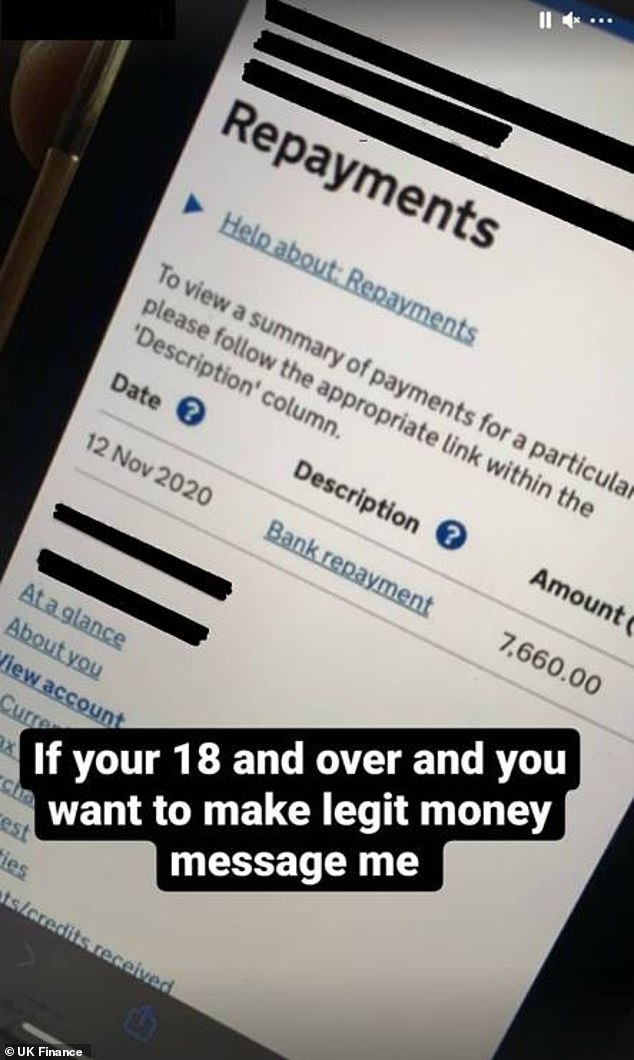 UK Finance found many of the adverts aimed at luring people into becoming money mules were published on social media platforms like Facebook, Instagram and Tiktok

Three university students aged between 20 and 28 were sentenced to a collective 38 months in prison in September 2019 after they helped criminals launder £64,500 stolen in a scam from a woman in her eighties by passing the money through their bank accounts in return for payment.

And one 18-year-old Lloyds customer had her bank account closed down by the bank after she responded to a stock market trading advert she responded to on Instagram. The student opened a new account and passed the details to the fraudster behind the advert, sending £1,000 of her own money in the process.

Her account was reopened after she reported the situation to the bank and the police.

Previous polling by Barclays found seven in 10 university students were not aware of the consequences of acting as a money mule, while separate research by Santander found the same proportion of people did not know what one was.

In an attempt to cut through to younger generations who are more at risk, it partnered with the cast of BBC mockumentary ‘People Just Do Nothing’ for a series of fraud warning videos, one of which was dedicated to the problem of money muling.

However, with cases continuing to rise among the 21-30-year-olds, there is still plenty of work to be done.

Cifas’ chief executive, Mike Haley, said: ‘Although transferring funds doesn’t feel like it’s doing any harm, the money you’re being asked to move often comes from scams and crimes committed against innocent members of the public.

‘We’re now seeing more variations of this type of activity including mules being asked to buy cryptocurrencies or gift cards to mask the stolen funds, making it even more difficult for organisations to trace this money and return it to victims.

‘Banks now have sophisticated technology to detect mule activity. When mules are caught, they can expect their bank accounts to be closed and face great difficulty in obtaining credit, mobile phones or loans in the future.

‘It is vital that you keep your bank account to yourself and not be fooled into taking part in this illegal activity.’