Traders who bought in to the so-called Gamestop trend early enough have made a small fortune over the past few weeks.

But they’re not the only people seeing the money flood in. Trading firm IG Group raked in record revenues over the three months to February 28, as customers flocked to its platform to try and take advantage of the craze.

Trading revenues at IG were up 65 per cent on the same time a year earlier, at £230.3million, as a record 230,100 customers joined over the quarter. 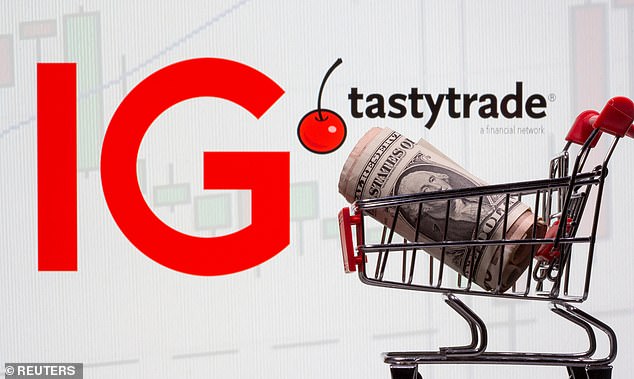 Trading firm IG Group raked in record revenues over the three months to February 28, as customers flocked to its platform to try and take advantage of the so-called Gamestop trend

The company saw a huge spike in new clients joining in late January and early February, when the Gamestop trend began.

The phenomenon saw hordes of small investors pile into Gamestop – a relatively obscure US stock – to drive up its price and cause hefty losses at the hedge funds which had been betting against it.

As market veterans were stunned by the show of financial anarchy, largely coordinated on social media site Reddit, newer and younger investors who had never traded before tried to get in on the game.

IG’s revenue over the first nine months of its financial year is now up 66 per cent on the same time a year earlier, at £647.1million.

The group’s boss, June Felix, said she was ‘delighted with the excellent results’. So were shareholders, as the stock climbed 4.9 per cent, or 39.5p, to 850.5p. 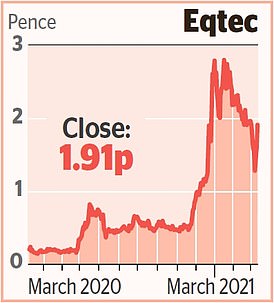 A company that makes energy from gasifying waste is in talks to supply power to one of Toyota’s manufacturing sites.

AIM-listed Eqtec is building a waste-to-energy plant in Deeside, North Wales, next to one of the car maker’s plant.

The two firms will work together for three years to see if it is feasible – and if Toyota could in turn reduce waste from the site by sending it to Eqtec’s power plant.

The blue-chip index was boosted by rising mining stocks, after the US House of Representatives passed a vast $1.9 trillion (£1.3billion) Covid relief bill which heated up commodity prices.

Lenders more broadly were under pressure, after the European Central Bank announced it would speed up its bond-buying to combat rising yields.

Rising yields – effectively the interest rate that the bond pays – are good news for banks, because they imply that interest rates will climb and banks can charge more money for lending.

Astrazeneca was also losing ground after several European countries halted the roll-out of its Covid vaccines, citing deaths of people who had been inoculated and who later suffered from blood clots.

Landscaping company Marshalls leapt after it revealed customers had been splashing out on their garden improvements during lockdown.

Revenue for 2020 was down from £541.8million to £469.5million, due to the impact of Covid-19, while profits took an even bigger hit, falling from £73.5million to £9.4million as the firm invested in manufacturing efficiency and cost cutting.

But in the second half of the year, sales to home customers doing up their patios and driveways shot up 9 per cent compared to the previous year.

Marshalls added that business in 2021 had kicked off well, and it was raising its expectations for 2021.