The boss of Goldman Sachs has acknowledged the stress his young staff are under but stopped short of encouraging a balanced work life.

One said: ‘The sleep deprivation, treatment by senior bankers, mental and physical stress… I’ve been through foster care and this is arguably worse.’ 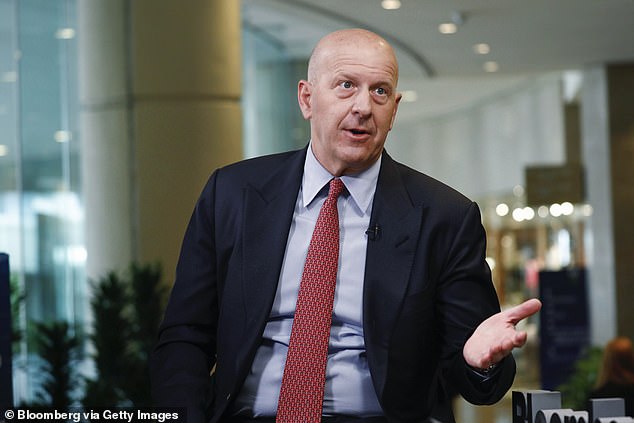 In response the Goldman boss said the bank would enforce the company’s ‘Saturday rule’ – forbidding junior bankers to work from 9pm on Friday until Sunday morning.

But he refused to go any further. He said: ‘It’s great that this group of analysts went to their management.’

But he said clients come first: ‘If we all go an extra mile for our client, even when we feel that we’re reaching our limit, it can really make a difference in our performance.’ His comments come as bank bosses are under pressure as work and home lives have become blurred during lockdown.

Jane Fraser, boss at Citigroup, has banned Zoom meetings on Fridays and declared May 28 a company holiday amid worries of burnout. She said in a memo to staff: ‘I know, from your feedback and my own experience… It’s simply not sustainable.’

The young bankers’ stand at Goldman has drawn praise and criticism, with some old timers labelling them ‘wimps’.

Investment banking is notoriously tough but the rewards can be highly lucrative.

A 22-year-old analyst at Goldman can expect a basic salary of £60,000 plus a bonus. The heavy workloads quickly reveal those who can handle it and many leave.

One analyst who started at Deutsche Bank’s merger and acquisition team back in 2008 said: ‘I worked from 9am to 2am on average plus ten hours at the weekend. It’s OK for some but it didn’t suit me.

‘It gets a bit better as you get more senior but you still have to work a load of hours. Your job is your life. Everyone is divorced, multiple times. The only upside is the money.’

But the world has moved on. Bosses have to be more aware of their young employees’ mental health, a topic that ‘woke’ millennial staff discuss openly. Banking is also increasingly losing the best graduates to the tech sector.

Many have defended the young bankers. Neil Wilson analyst at Markets, said: ‘It’s OK for senior managers living in a six-bedroom house in Surrey.

‘But many staff are stuck in a flatshare with three or four boys and girls trying to work in the living room. They have every right to be mad.’