A surge in Covid infection rates across Europe and worries about the speed of vaccine rollouts on the Continent have thrown the prospect of foreign travel in the next few months into doubt.

In a sector-wide sell-off British Airways-owner IAG, Jet2, Easyjet and Carnival saw their shares tumble between 2 per cent and 7 per cent as traders panicked that the companies might lose a second crucial summer season. 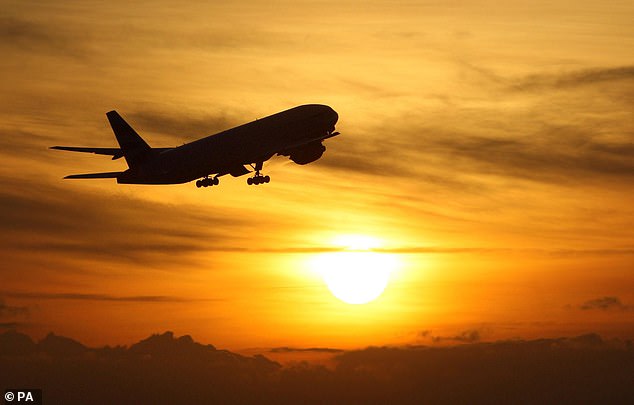 Virus threat: A surge in Covid infection rates across Europe and worries about the speed of vaccine rollouts have thrown the prospect of foreign travel in the next few months into doubt

She said: ‘My advice would be to anybody right now is just to hold off on booking international travel.

‘It just feels premature to be booking international holidays at the moment.’

She echoed comments made by Defence Secretary Ben Wallace, who said over the weekend that trips abroad were ‘potentially risky’, and government health adviser Mike Tildesley, who said international travel was ‘extremely unlikely’ because it would risk new Covid variants being brought back to the UK.

A ‘traffic light’ system is among the options now being considered, as well as Covid ‘vaccine passports’.

Plane engine maker Rolls-Royce, which is paid for the number of hours its engines fly also chalked up heavy losses, plunged 4.4 per cent, or 5.1p, to 111.9p.

Turkey set to be a holiday hotspot 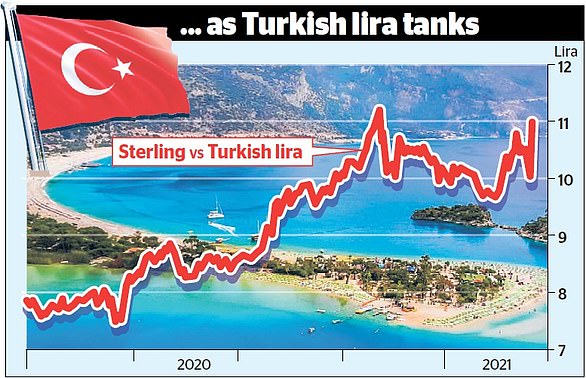 Cheap trips to Turkey could be on the cards this summer after the sacking of the country’s central bank chief sent the lira tumbling.

President Erdogan fired Naci Agbal over the weekend – just days after the head of the central bank had raised interest rates.

The rate rise had bolstered confidence in the lira – however, the currency crashed by around 10 per cent against sterling yesterday following Agbal’s shock dismissal.

The slump could make it cheaper for Britons to go on holiday to Turkey later this year if foreign travel is allowed to resume.

The country is keen to attract British tourists. But Gerald Khoo, transport analyst at Liberum, cautioned that everything depended on whether EU infection rates, vaccine rollouts and new variants would stop foreign travel.

Khoo said: ‘In normal times this would make Turkey a more attractive destination, but people may not be allowed to travel.’

In 2018, Erdogan described high interest rates as the ‘mother and father of all evil’. He argues that they trigger high inflation – which is at odds with the view of conventional economics.

Mike Hewson, chief market analyst at CMC Markets, said the prospect of a third Covid wave across Europe ‘pushes the prospect of any sort of economic restart into the back end of the second quarter’.

The earliest that foreign trips could resume under Prime Minister Boris Johnson’s roadmap out of lockdown is May 17.

Advisers will meet to discuss whether this is still appropriate or will need to be pushed back on April 12. Airline and travel firms were among the worst hit last year when the pandemic threw stock markets into turmoil.

These companies tapped the market for billions of pounds last year – but there are growing fears many will have to turn to shareholders again if this summer collapses.