There is an argument from many experts that climate change is the biggest issue facing the planet.

Rarely a day that goes by that we don’t hear about rising sea levels or the worldwide drive to cut carbon emissions – issues that we are told will eventually affect us all if they are not tackled.

These problems can seem like they are a long way off into the future – but there are also short-term effects. 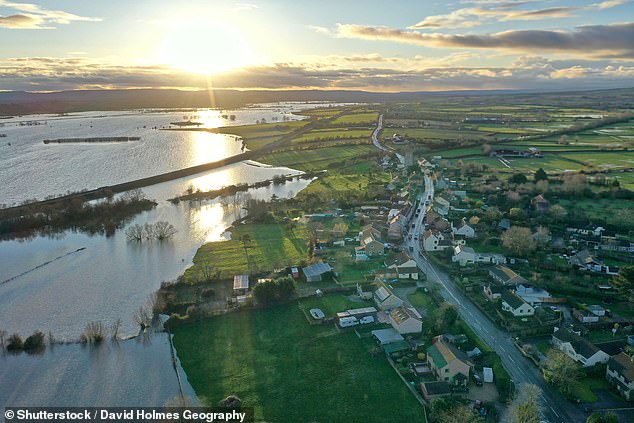 Flooding on the Somerset levels in the West of England. Emoov has ranked the UK cities most at risk from climate change, which included nearby Bristol at number four

One of these is the increased likelihood of extreme weather events such as flooding and high winds, which can cause damage to homes.

New research by online estate agent Emoov has found that banks and building societies could be increasingly reluctant to loan money against properties in high-risk areas.

So could global warming really dash your hopes of getting a mortgage?

Emoov highlighted the UK cities most at risk from the effects of climate change, which included Brighton, Cardiff, London and Bristol.

It says that factors such as high winds and flooding are contributing to insurance companies upping their premiums, and cautious mortgage lenders revising their loan to value amounts, with high-risk areas seeing rates climb the quickest.

How could climate change affect my home?

These are the climate change risk factors that the cities in the Emoov study were scored on:

This could not only affect people looking to buy a home or remortgage, but it could also mean home owners in these areas find it hard to sell their properties in future.

Coastal city Brighton topped the list due to concerns around rainfall and rising sea levels, which could see part of the city submerged under water by 2100.

Tied for second place were the Welsh capital Cardiff and Northern Irish capital Belfast, while other coastal cities such as Exeter and Liverpool also scored highly on the list.

But it is not just seaside cities that could potentially be affected. Manchester and Birmingham, for example, aren’t at risk of submerging underwater by 2100 but are still threatened by the effects of rising temperatures and humidity.

How big is the risk?

In 2019, the Bank of England published a discussion paper on climate change, which aimed to ‘test the resilience of the current business models of the largest banks, insurers and the financial system to the physical and transition risks from climate change.’

It sought responses from the financial sector, and a follow-up report should be published this year. 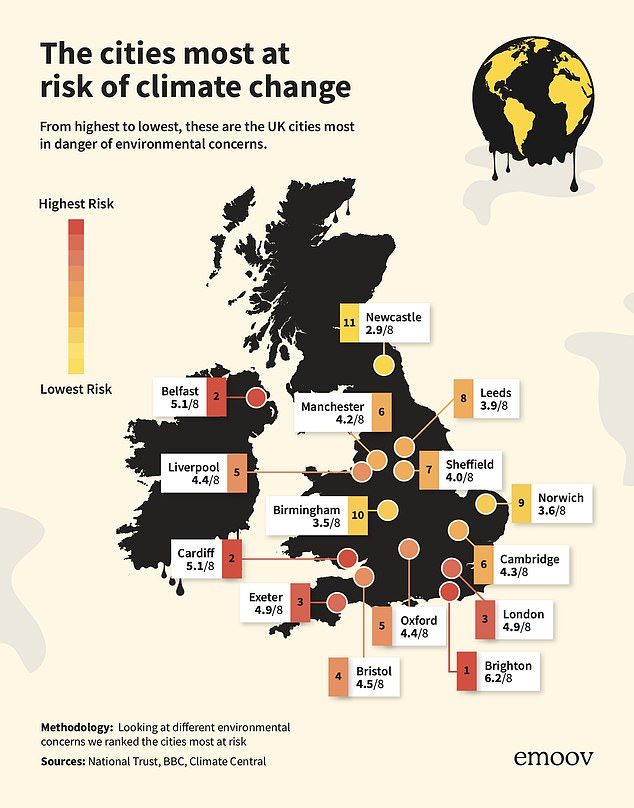 Climate change: These are the cities deemed to be most at risk from changing weather

In the paper, the BofE points out that 10 per cent of the value of mortgage exposures in England was on properties in flood risk zones.

It says: ‘Physical risks arise from increasing severity and frequency of climate and weather-related events. These events severely damage property and other infrastructure[…] This reduces asset values, results in lower profitability for companies, damages public finances, and increases the cost of settling underwriting losses for insurers.’

‘Longer-term, there could be implications as to lenders’ risk appetite, including loan-to-value changes, property exclusions, geographical exclusions and so on,’ he says. 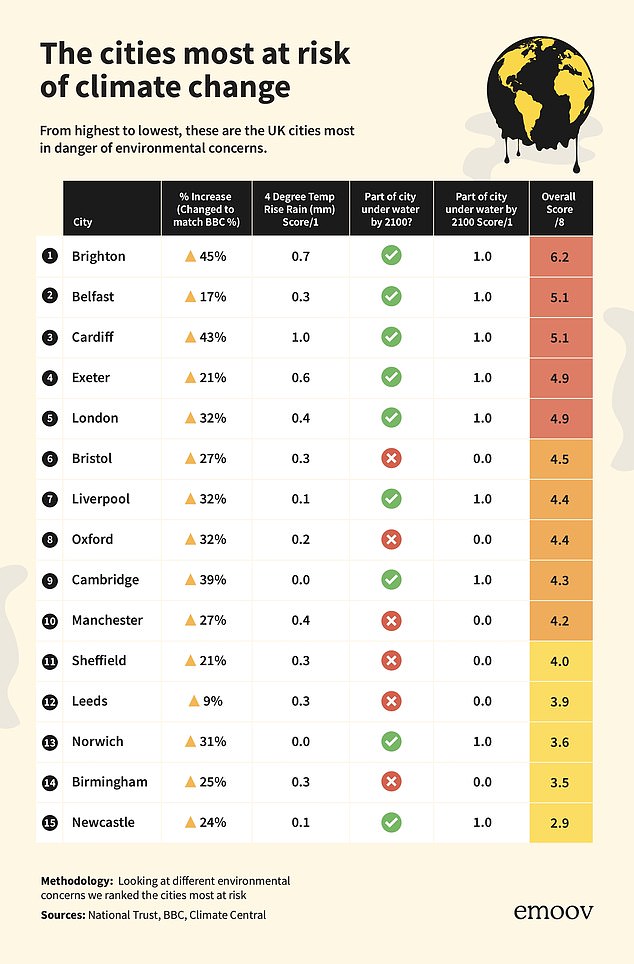 What is the situation right now?

At the moment, most lenders don’t have specific policies relating to climate change. Mortgage lenders will base their assessment on the weather risks to your home on two things, the first of which is a surveyor’s report.

‘However they will listen to the judgement of a surveyor who values the property as part of the lending process. If, in attending a property, the surveyor feels that it’s not viable for the life of the mortgage, such as being on a flood plain or on a clifftop and therefore potential for subsidence, then this may pose a problem getting one approved.’

If you are looking to buy a home in such an area, Harris suggests bringing in a specialist surveyor.

‘If there are concerns around properties that may be affected, such as flood plains, rising sea levels, coastal erosion and land slides, then specialist reports and surveys should be sought. 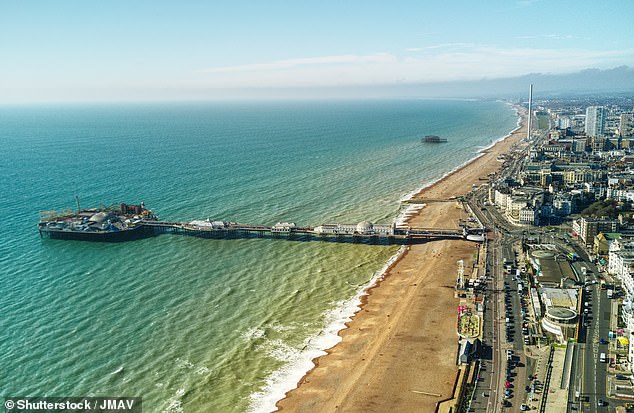 Coastal city: Brighton was deemed the most at-risk area in England for climate change

‘A valuation for the mortgage provider must identify that the property has a suitable mortgage security (which could be perceived as unsuitable given the above). A condition of the mortgage will be valid, suitable and adequate buildings insurance in place.’

The second factor a mortgage lender will usually take into account when deciding whether to lend on a property affected by climate issues is insurance.

‘A lot of the time it comes down to insurance: if an insurer won’t cover your property, a mortgage company won’t either,’ says Naveen Jaspal, chief operating officer of Emoov.

‘In really high-risk areas, some properties become completely unmortgageable, meaning buyers must fork out the full price of the property if they wish to go ahead with the purchase.

‘There are some high-risk home insurers and if they agree to insure the property, there should be some mortgages available.’ 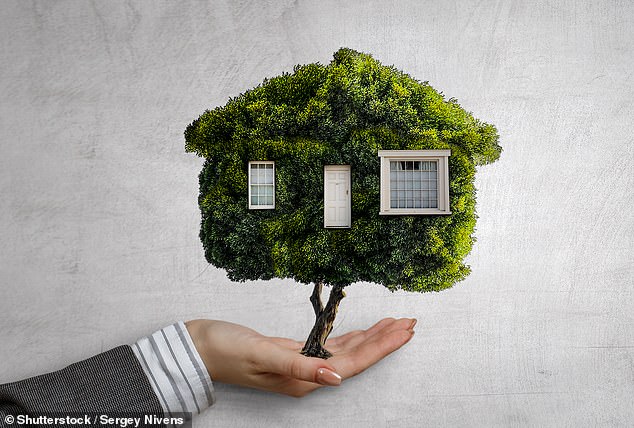 While a property in an at-risk area may be insurable and mortgageable, the costs of both will probably be higher.

If your home is in an area deemed as high risk, this could mean needing to have a deposit of at least 30 per cent in order to get a mortgage.

‘For high-risk properties, mortgage lenders tend to work on a 70 per cent loan-to-value ratio to lower their risk, meaning that buyers will need a minimum of 30 per cent deposit to purchase the property,’ explains Jaspal.

Harris points out that there are special insurance policies available for at-risk homes, for example FloodRe, a joint initiative between the Government and insurers.

Under this scheme, a home insurer can choose to pass the flood risk element of a policy to the FloodRe fund for a fixed price, which helps to keep homeowner’s premiums down.

It funds this via an annual levy paid by insurance providers.

However, there are exclusions on these policies, including not being available on homes built after 2009.

What is being done to tackle this?

In recent weeks and months, several lenders have brought out ‘green’ mortgages which reward borrowers for improving the energy efficiency (EPC) ratings.

This suggests that climate issues are creeping up their agendas.

‘Climate change and related environmental matters have accelerated up the list of lenders’ priorities,’ says John Eastgate, managing director of property finance at Shawbrook Bank. ‘Some lenders have introduced ‘green’ products for more efficient properties, but these are more symbolic than meaningful.’

Retrofitting a home to limit its potential effect on the climate is all well and good, but in the case of homes that are susceptible to flooding or high winds, the damage is already done.

Some say there is a risk that people who own these kind of properties could be unfairly penalised.

‘However, lenders need to act responsibly and not disadvantage those who live in areas with higher levels of environmental risk.’

One particular risk is that lenders will deem entire postcodes as being unmortgeable because of climate issues, not taking into account individual properties and circumstances.

To make sure this doesn’t happen, lenders will need to have access to detailed data on environmental risks.

‘The challenge will be to ensure adequate data is available so the finance industry can properly assess risk on a case-by-case basis,’ says Angus Stewart, chief executive of buy-to-let mortgage broker, Property Master.

‘The fear is that lenders and insurers institute a blanket ban on whole postcodes without taking the time to see what mitigating factors property owners and landlords may have taken.

‘We don’t want to end up with a repeat of the cladding issue which could happen if all properties in a certain area were ruled out by mortgage providers.’