Two weeks ago, our garage was broken into. They stole my mountain bike, worth £800, and my wife’s e-bike.

We informed our insurance company, RSA, and were told we could make a claim on my bike but not on my wife’s e-bike because it is motorised and, therefore, not covered. 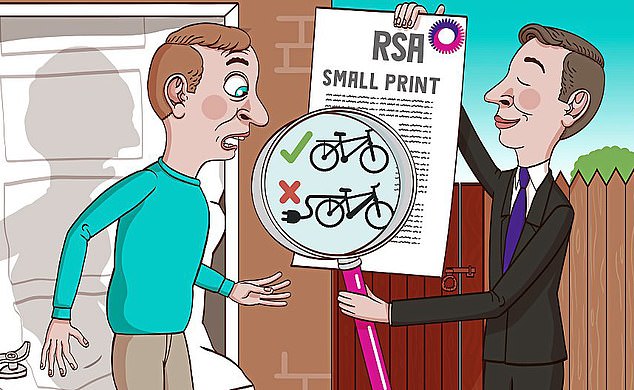 Claim refused: A reader was shocked when his insurer refused to replace his wife’s stolen ebike after thieves broke into their garage

I was surprised the e-bike was not covered by household insurance — and I suspect many readers of this column will be, too.

E-bikes, which have a small battery-powered motor which only engages when you pedal, are becoming increasingly popular. European sales increased 23 per cent last year. Analysts predict they could hit ten million a year by 2024.

I suspect most owners would expect them to be covered as a pedal cycle – my Aviva policy, provides up to £5,000 cover.

RSA remains adamant it will not pay out even though I suggested it may like to make an exception as you are care workers.

Your policy excludes motorised or mechanically propelled or assisted vehicles other than garden machinery and motorised/electric wheelchairs.

RSA confirms it will be paying for the mountain bike and damage to the garage.

It says it is aware of the increased popularity of e-bikes and is planning to review coverage in the near future.

A spokesman adds: ‘Where e‑bikes are not covered as standard, customers may be able to contact us to add them to their insurance policies — we will consider insuring them on a case-by-case basis.’

Malcolm Tarling, of the Association of British Insurers, makes another important point for those who may have splashed out on a bike of any form: ‘Most contents insurance policies that include bikes (e and pedal) have a low cover limit, which is likely to be below the value of an electric bike, and unlikely to cover bicycle theft away from the home.

‘Policies vary, so check your cover. You may need to arrange specific cover for these devices.’

E-bike owners should speak to their insurers. The more pressure consumers exert on this issue, the more likely insurers are to listen. 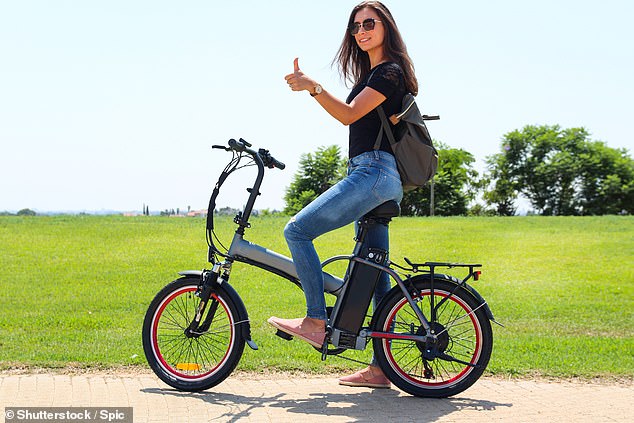 In January 2017, we had a new boiler fitted. The following 19 months saw Green Star send bills of up to £1,360 per quarter, which we knew were excessive.

Green Star was adamant that nothing was wrong. But when we switched supplier, it found we had been charged in cubic feet instead of metres cubed.

We emailed and phoned Green Star again and again. Eventually, it accepted that we had been overcharged and told us it was looking into our refund on a ‘critical basis’. We are still waiting.

Green Star was taken over by Shell Energy at the end of 2019. It has now agreed you were billed in cubic feet rather than metres cubed.

Fortunately, you had taken photographs as proof. You have been refunded £1,800.41. Shell Energy has apologised.

My husband of more than 62 years died in November. I asked for our Barclaycard to be put in my name only. I paid the latest statement and then tried to use the card to pay for petrol. It was declined, twice.

I called the bank’s bereavement team and was transferred to applications where I was left on hold for 15 minutes. I then got a recorded message telling me to go the website.

I rang the team again and was told that, because my husband was the main card holder, I would have to apply for a new card online. I’m 81, not computer-literate and profoundly deaf.

Once again Barclays fails a recently-bereaved customer. How does restricting applications to the internet fit with financial inclusion and Equalities Act obligations?

After my contact, Barclaycard arranged for a specialist team to assist with a telephone application – something it should have done when you first phoned.

It has apologised and offered £50 for the distress and £40 for some Freedom Points.

Your case highlights an issue for couples who share one credit card account. One of you will be the principal cardholder on whom the bank has carried out financial checks and who is responsible for the account.

It, therefore, makes sense for couples to have two card accounts and for each to be the principal holder of one.

A final point. When the principal cardholder dies, it is their estate that is responsible for paying any outstanding balance. If there is no money in the estate, then the debt ends with them.

Straight to the point

Easylife took £69.99 from my Santander account in June 2019 without permission and again in May 2020. Santander refunded me once but then took the payment back.

Santander clawed the payment back because Easylife had refunded you, too.

The bank adds that it has no record of the 2019 dispute but has now reimbursed you for that payment.

Timpson has lost a dress I was gifted by my sister shortly before she died.

I still have the ticket I received when I took it in for alterations and I have called head office and emailed the chief executive’s secretary but to no avail.

A spokesman apologises for causing distress but, sadly, its investigations have drawn a blank. You have since accepted a £100 goodwill payment.

My husband died in 2003 and I’ve just found a Post Office savings book in his name. Can you help me find out if there is any money in it?

The Post Office account was operated by National Savings & Investments at the time your husband held it.

NS&I says there is a 37p balance. If you send the paperwork, it will work out if there is any interest due. You have also been sent a form to withdraw the funds.