The co-founder of Apollo Global Management has stepped down from all his leadership roles at the firm following an outcry over his ties to paedophile Jeffrey Epstein.

Leon Black, who helped launch the prominent New York private equity giant 30 years ago, had already given up the role of chief executive but had indicated he planned to remain as chairman.

Those plans were officially abandoned yesterday as Apollo said Jay Clayton, the former chairman of US regulator the Securities and Exchange Commission, would head Apollo’s board. 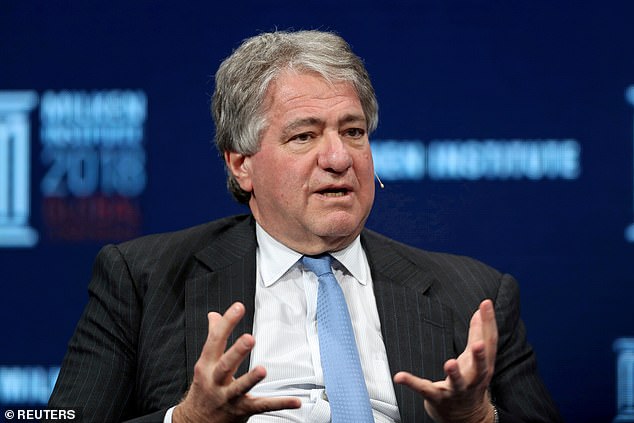 Leon Black, who helped launch Apollo Global Management 30 years ago, has stepped down from all his leadership roles at the firm following an outcry over his ties to Jeffrey Epstein

Billionaire Black, 69, had faced intense scrutiny and anger from investors over his relationship with Epstein, who died in jail awaiting trial on further charges of child sex offences in 2019.

In an email to staff on Sunday, Black said the ‘relentless public attention and media scrutiny’ had ‘taken a toll on my health and have caused me to wish to take some time away from the public spotlight’.

In an official statement yesterday, he added: ‘I view this as the ideal moment to step back and focus on my family, my wife Debra’s and my health issues, and my many other interests.’

A report by law firm Dechert, commissioned by Apollo and published in January, revealed that Black had paid Epstein $158million between 2012 and 2017 to handle art transactions and give tax advice.

By that time, Epstein had already been convicted of procuring a child for prostitution in 2008 and had served a 13-month sentence, much of it on work release.

The Dechert report found that Black viewed Epstein as a ‘confirmed bachelor with eclectic tastes, who often employed attractive women’, but it did not find any evidence that the Apollo boss had been involved in criminal activity or had any knowledge of Epstein’s sex trafficking.

But Black’s position at the firm he co-founded has become increasingly tenuous in the wake of the Epstein scandal.

Investors were considering pulling their money, as Black’s continued influence at the top of Apollo did not align with the principles of good governance and social responsibility which many institutions are now pushing for.

But in the email to staff, Black hinted that his departure may be temporary as he said: ‘I hope to return at some point.’

Marc Rowan, another Apollo co-founder who had been announced as chief executive in January, picked up the role yesterday.

In the UK, Barclays chief executive Jes Staley is still being investigated by the Financial Conduct Authority over whether he adequately disclosed his own relationship with Epstein to his employer.

Staley, a friend and business associate of Epstein, visited him while he served his sentence on work release. There is no suggestion that Staley was involved in any criminal activity.