Changeover day at the Bank of England a year ago, when Andrew Bailey succeeded Mark Carney as governor, was marked by a sudden dash for cash in the biggest test for market resilience for a decade.

Tensions may have subsided, but the tasks for Bailey do not get easier.

At this week’s meeting of the interest rate setting Monetary Policy Committee, a core issue will be the rising threat of inflation and the impact that will have on rates. 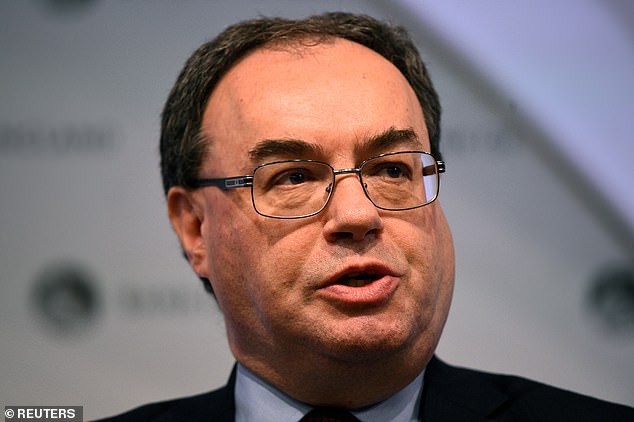 Under fire: Bank of England governor Bailey is having to cope with the fallout from his previous job as chief executive of the Financial Conduct Authority

Bailey is having to cope with the fallout from his previous job as chief executive of the Financial Conduct Authority.

He is involved in a spat with former High Court judge Dame Elizabeth Gloster over culpability for the London Capital & Finance debacle. He could also be in difficulty over the policing of Neil Woodford’s investment empire and losses suffered by 500,000 savers.

Meanwhile, UK regulators have failed to accept any responsibility for the insolvency of supplier credit outfit Greensill, even though it has an impact on confidence in the City and industrial jobs.

The personal difficulty for Bailey is that regulatory failings impinge on his other work. In a BBC interview, he was optimistic on recovery and indicated that the Bank was ready to revise down its unemployment forecast.

Vaccine rollout, together with President Biden’s £1.4 trillion stimulus package, have caused global markets to home in on inflation risk.

As Bailey was batting away the possibility of an inflation surge by the end of 2021, the bond markets were sending out a different signal.

The yield on the ten-year gilt climbed to 0.843 per cent, the highest level since the ‘dash for cash’. While that may seem inconsequential, one should not ignore the warnings in the March budget document which noted that if interest rates were one percentage point higher it would increase government spending on debt interest by £20.8billion.

The Bank can be effective in holding down short-term rates and could potentially still head into negative rate territory.

But bearing down on rates further up the yield curve might require yet more quantitative easing in addition to the £895billion already out there.

It would be splendid if Bailey could, in one bound, free himself from the regulatory quagmire of the FCA.

He could potentially seize the initiative by showing some leadership on stepped-up policing of shadow banks such as Greensill.

Simply taking a narrow legalistic view of the Old Lady’s responsibility for orderliness in UK finance is unacceptable. Maybe he could start by galvanising, refreshing and diversifying the deputy governors.

The August 2019 date for an end of Payment Protection Insurance (PPI) compensation left the claims management firms short of work.

They identified whole new classes of hurt including those against doorstep lender Provident Financial. The sub-prime lender has been inundated with complaints that its home credit business failed to properly consider affordability when approving loans.

In an effort to cap the losses, Provident proposes to hive off its consumer credit division and set up a special compensation scheme.

It wants to inject £65million into the plan. This would mean some of the most credit-stretched families would not get the compensation which the FCA thinks they are entitled to.

As sympathetic as one is to less-well-off borrowers, closing down doorstep credit, rather than better regulating the terms, is not a great option.

Most doorstep borrowers do not qualify for credit cards or borrowing from the Provvy’s Vanquis arm. If the FCA effectively proscribes doorstep lending, all that does is drive financially vulnerable consumers into the hands of the real loan sharks armed with baseball bats.

Uncertainty over the costs of escaping doorstep lending sent Provvy shares, a favourite of Neil Woodford, down nearly 28 per cent in latest trading.

An unintended consequence of regulatory muscle flexing could be higher A&E admissions.

Time is running out for a UK-based and quoted G4S. Investors must vote on the private equity backed £3.9billion bid by Allied Universal for the world’s largest security company by today.

Not everyone is as enthusiastic as chief executive Ashley Almanza who stands to collect up to £15million for the deal.

To get the bid over the line the acceptance level has been successively lowered from 90 per cent, to 75 per cent and now 50 per cent.

A shock defeat is not expected for this debt-fuelled travesty, but you never know.