The White House is pulling back the expected nomination of a top Interior Department official in a demonstration of the sway that Alaska Republican Sen. Lisa Murkowski has in the 50-50 Senate.

Elizabeth Klein, a former Obama Administration official and renewable energy expert, had been publicly reported to be nominated as the deputy secretary at the Interior Department back in January.

But the administration is withdrawing the nomination, Politico reported Monday evening, after Murkowski voiced her concerns.

‘Liz Klein’s nomination was never formally submitted to the United States and will not be nominated to this position,’ a White House spokesman told DailyMail.com Tuesday. 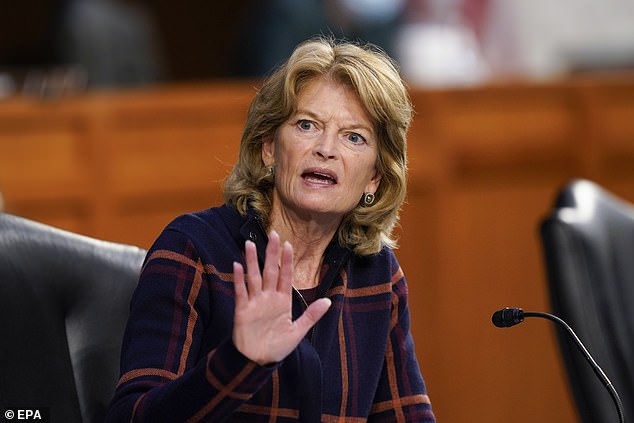 Sen. Lisa Murkowski pushed back against President Biden’s nomination of Elizabeth Klein to a top Interior Department post, and the nomination is being withdrawn Politico reported

Murkowski, who represents an oil rich state, joined Democrats in voting for Deb Haaland as Interior Secretary last week. Haaland was confirmed 51 to 40, with four Republicans voting for her.

The powerful lawmaker helped tank another Biden nominee when she came out against Biden’s choice to run the Office of Management and Budget, Neera Tanden.

Tanden had blasted a number of Republicans, including Murkowski, in tweets while running the liberal Center for American Progress.

Murkowksi has put forth an alternative name, Tommy Beaudreau, who hails from her home state. He also worked in the Obama administration, and is a partner at the law firm of Latham and Watkins.

He joined the Department amid the Deepwater Horizon disaster, and became the first head of the Bureau of Ocean Energy Management (BOEM). The position involves oversight of offshore oil and gas projects as well as offshore wind.

Klein is the  deputy director of the State Energy & Environmental Impact Center at the New York University School of Law. She, too, was a lawyer at Latham & Watkins, where she focused on energy and environmental law issues.

Murkowski’s office did not respond immediately for a request for comment.

The Senate confirmed Marty Walsh as Biden’s Secretary of Labor Monday, filling the last major cabinet post, although there is not yet a new nominee to head the Office of Management and Budget.