A motorist battling wild weather conditions in Queensland has lost control while trying to plough their ute through raging floodwaters.

Footage posted online shows the car trying to cross the road over a swollen creek at Wongawallan, in the Gold Coast’s northwest, on Monday.

As the vehicle enters the water, its wheels become completely submerged with the force of the gushing stream, and lost traction, making the car fishtail. 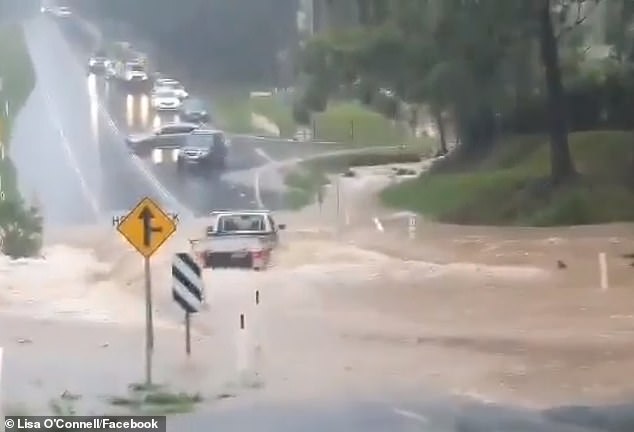 The shocked woman filming lets out an audible gasp as she watches the potentially deadly situation unfolding in front of her.

But the driver regains control as the car’s wheels reach drier ground on the other side before continuing on their way.

The State Emergency Service has received hundreds of calls for help since the rain set in over the weekend, and crews have been forced to stage at least six swift water rescues, four involving people trapped in cars.

One man was plucked from a tree in the southeast after having to abandon his car in floodwaters. 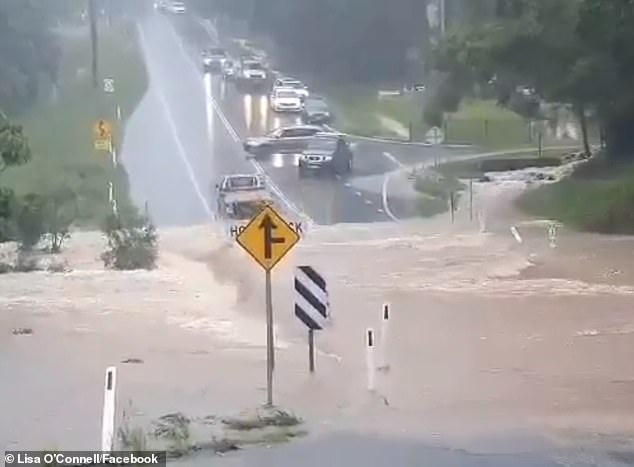 Some theme parks, including Dreamworld, have closed as the weather worsens, with the Gold Coast, Brisbane, and the Sunshine Coast on high alert, along with Channel Country communities as far west as Birdsville.

A flood watch is current for a wide band of southern Queensland stretching from the South Australian border to the southeast coast.

Heavy falls and flooding is expected across western and southern Queensland from Monday afternoon, extending to the southeast coast on Tuesday.

Premier Annastacia Palaszczuk has urged Queenslanders to get home safely and stay there, with the worst of the weather not expected until later on Monday evening.