Wanted: Police release new pictures of 10 ‘Kill the Bill’ protestors they want to trace as they probe violent Bristol riot

Police are appealing for help identifying ten people as part of the investigation into the ‘Kill the Bill’ riots.

Bristol saw 3,000 legitimate demonstrators protesting the Police, Crime, Sentencing and Courts Bill on Sunday, but pictures have captured moments of clear criminal damage being carried out, such as street furniture or roadworks equipment being destroyed and people invading a police station.

Officers from Avon and Somerset Police have now issued pictures of ten people they want to speak to in connection with the Bristol riots. Eight men aged between 20 and 44 arrested for violent disorder have been released under investigation.

One 28-year-old man from the Bedminster Down area of Bristol, appeared at Bristol Magistrates’ Court this morning.

He was charged with possessing an offensive weapon and is next due to appear at the same court on June 10.

A spokesman for Avon and Somerset Police said it will be one of their biggest ever investigations.

They said: ‘We’re appealing for the public’s help to identify ten people we’d like to speak to as part of our investigation into the violent disorder in Bristol on Sunday.

‘A total of 21 officers were injured – two of them seriously – when they were violently confronted by people gathered outside the Bridewell Police Station in Bridewell Street.

‘Officers were attacked and threatened, police vehicles including a community police station were set on fire and criminal damage was caused to the police station exterior.

‘The disorder followed a protest in the city centre attended by an estimated 3,000 people.’

Detective Chief Superintendent Carolyn Belafonte said: ‘The investigation into Sunday’s disgraceful scenes of violence will undoubtedly be one of the largest in Avon and Somerset Police’s history.

‘More than 100 officers and staff continue to work on the inquiry which is being led by our Major Crime Investigation Team. 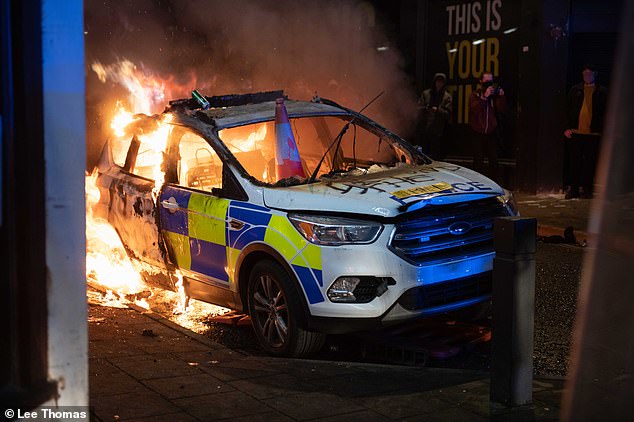 ‘Hundreds of hours of digital material has already been reviewed and images of the first 10 people detectives want to talk to about Sunday’s events have been identified and published on a gallery on our website.

‘Officers and staff are working their way through images and footage as quickly as they can but with more than two terabytes worth of CCTV footage as well as nearly 100 officers’ body worn video cameras and more than 100 videos already sent in by members of the public to review, this will take a considerable amount of time.

Det Ch Supt added: ‘The incident attracted worldwide attention and we continue to be humbled by the incredible support shown to us from the public, as well as from organisations and agencies across the city and beyond.

‘The public response in particular has been nothing short of amazing and I want all those who’ve shown us support and kindness to know how much we appreciate it.

‘In addition to asking for help to identify the people in the images we’re releasing, we also continue to ask people to submit any footage or photos they may have captured of Sunday’s events. We’ve set up a dedicated form on our website where people can submit material or provide us with information.

‘Other lines of enquiry are also being progressed, including forensic evidence, which will help us identify those involved. We may have only arrested eight people so for but I guarantee we’re wholly committed to tracking down those who carried out offences and with the help of the public we will be making more arrests very soon.’