Vladimir Putin will finally get a Covid-19 vaccine tomorrow, he revealed on Monday as he leads Moscow’s efforts to market its Sputnik V jab to a flailing Europe.

The 68-year-old Russian leader had been under fire from Kremlin critics for stoking already-widespread vaccine hesitancy by failing to get a jab until now.

But he told health officials in a televised meeting that ‘vaccination is of course the voluntary choice of every person… by the way, I intend to do it myself tomorrow’.

Putin did not reveal whether he would get Sputnik V or one of the other two Russian-made jabs that have been approved before late-stage trials are complete.

Sputnik V was similarly rushed to market last year before results had come back from Phase III testing, but Europe has warmed to the jab since trial results suggested it is highly effective.

Putin discussed the jab’s possible use in Europe in an otherwise frosty call with European Council chief Charles Michel on Monday, the Kremlin said. 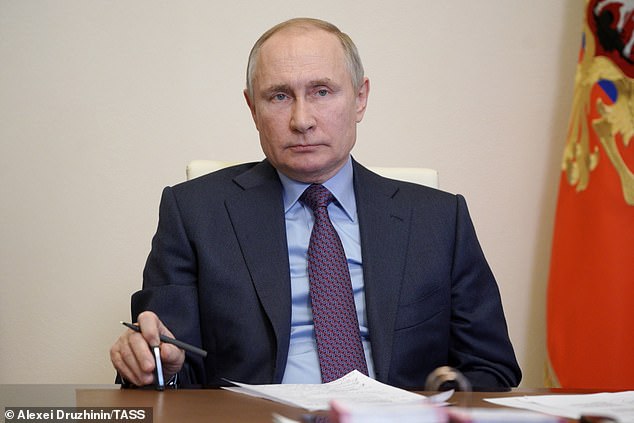 Vladimir Putin, pictured, is set to get his first dose of a coronavirus vaccine on Tuesday although he did not say which one it would be 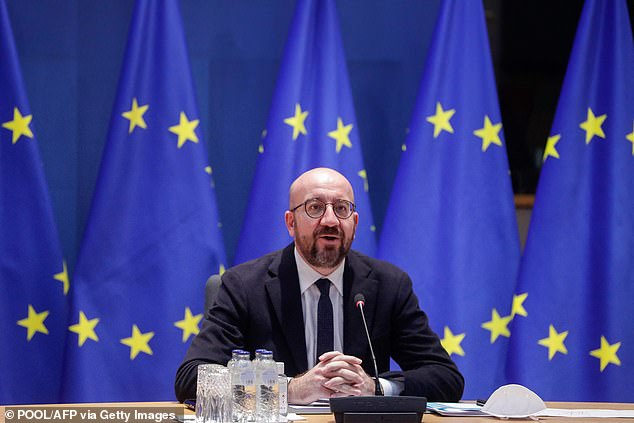 Putin told Michel today that Russia was ready to co-operate with Brussels but blasted what he called the EU’s ‘confrontational’ stance towards Moscow.

Relations between Russia and the West have soured over a series of issues including the poisoning and imprisonment of Putin’s most prominent critic, Alexei Navalny.

Nonetheless, Putin and Michel discussed the possible use of Sputnik V in Europe – which has already begun after Hungary and others broke away from the EU scheme.

Some German politicians have also endorsed Sputnik V, including several state premiers from the old East Germany where Russian-made jabs were commonplace.

Russia registered the vaccine last August, ahead of large-scale clinical trials, sparking concern among many experts over the fast-track process.

But trial results published in The Lancet last month showed Sputnik V having 91.6 per cent efficacy, going some way to dispel Western doubts about the shot.

EU regulators are studying the trial data in a step towards possible approval by the European Medicines Agency in what would be a propaganda coup for Putin. 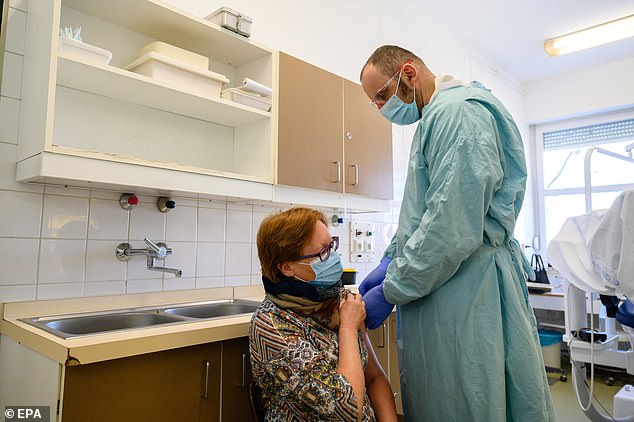 Hungary has already broken with the EU to buy its own Sputnik V jabs (pictured, a health worker gives a dose of Sputnik V to a patient in Szekesfehervar, Hungary on Sunday)

Health minister Mikhail Murashko said today that experts from the EMA will travel to Russia on April 10 to review clinical trials conducted on the vaccine.

The Russian president today blasted European politicians who have questioned the need for the Russian-made jab, describing their remarks as ‘strange’.

‘Despite the deliberate discrediting of our vaccine, more and more countries are showing interest in it,’ Putin said.

‘We are not imposing anything on anyone… Whose interests are such people protecting – those of pharmaceutical companies or the interests of citizens of European countries?,’ he asked.

On Sunday, the EU’s internal market commissioner Thierry Breton had said Europe had ‘absolutely no need for Sputnik V,’ sparking a fierce response from Moscow.

Russian officials accused Breton of being ‘clearly biased’ against the jab because it was Russian, adding that it had been approved for use in55 countries.

‘Europeans want a choice of safe and efficient vaccines, which you so far failed to provide,’ officials at Russia’s sovereign wealth fund said.

If Breton’s remarks were an official position of the EU,’ it said, ‘please inform us that there is no reason to pursue EMA approval because of your political biases.’ 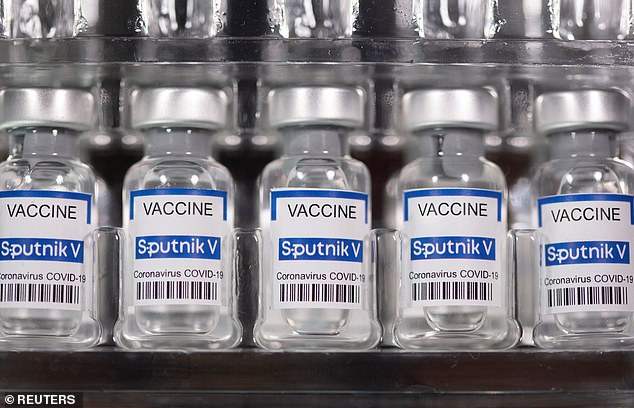 Sputnik V (pictured) was initially met with scepticism in the West after it was approved without proper trials but data published in The Lancet last month showed it was 91.6 per cent effective

Russia lags behind many other major countries in its vaccination progress so far, with only 4.3 per cent of its 146million population getting at least one dose.

Those trials are still taking place, and no data about the effectiveness of the two vaccines has been released so far.

Putin’s spokesman Dmitry Peskov declined to say which one of the three Putin will take on Tuesday, saying only that ‘all of them are good and reliable.’

According to the Russian president, 6.3 million people in Russia have already received at least one shot, and more than 4.3 million have had two doses.

Many in Russia are sceptical about being vaccinated, with a poll earlier this month showing less than a third willing to have a jab.

The same survey showed close to to two-thirds saying they believe that the coronavirus is a man-made biological weapon.

By Monday, Russia had registered more than 4.4million cases of the coronavirus and more than 95,000 deaths.