Ukrainians in the city of Chernihiv have resorted to digging trenches to bury their civilian dead, heartbreaking pictures and videos have shown.

Coffins of those killed in attacks carried out by Vladimir Putin’s forces were shown in a make-shift grave, after Russian bombs pounded the city’s main cemetery making burials there impossible.

Chernihiv Mayor Vladislav Atroshenko mayor said that due to the constant shelling, officials have been forced to move burials to a cemetery outside of the city. 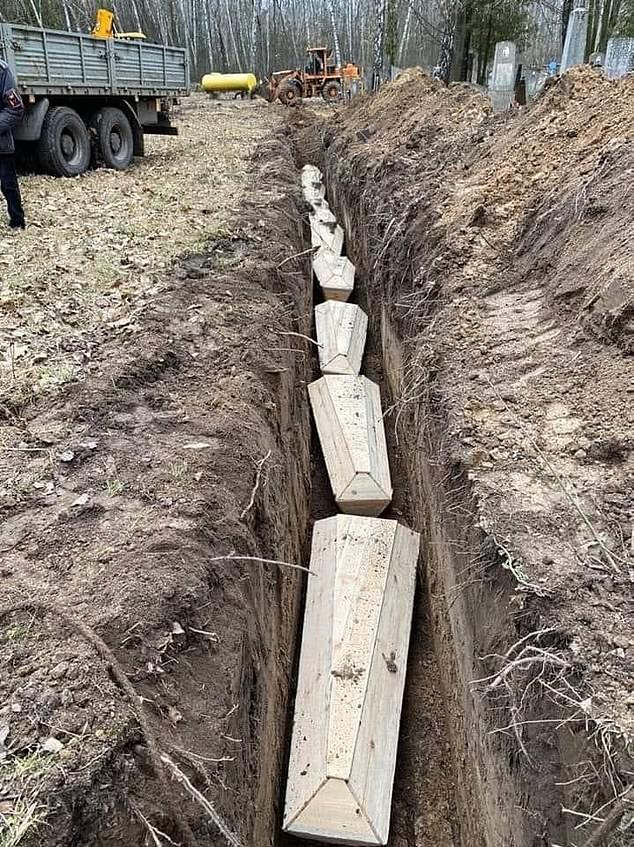 Ukrainians in the city of Chernihiv have resorted to digging trenches to bury their civilian dead, this heartbreaking picture has shown

He confirmed that the bodies are being put in rows, and that undertakers are putting signs with the names of the dead next to their coffins so they can be later identified and reburied after the war.

‘We can’t even use our Yatsevo cemetery today. We are temporarily using the cemetery in Yalovshchina,’ he said, according to Ukrainian news outlet Gordon.

‘The excavator digs trenches, we put bodies in a row and put signs with the names of those buried to later identify and rebury them,’ he noted. ‘It’s horrifying. It’s real genocide, absolutely conscious extermination of Ukrainians.’

Atroshenko sent a video of coffins being prepared for the dead to Gordon. The clip, only 11 seconds long, showed dozens of coffins lying on the ground.

Oleksandra Matviichuk, the head of the Centre for Civil Liberties in Ukraine, shared a tragic photo of the coffins to Twitter on Sunday.

‘Civilians killed in the Russian bombing of Chernihiv are buried in trenches,’ she wrote, quoting someone by the name of Sergiy Shumylo.

‘Since the main city cemetery in Yatsevo is under constant shelling by the Russian occupiers, the victims are buried in the Yalivshchyna forest. Eternal memory to victims of Russia.’ 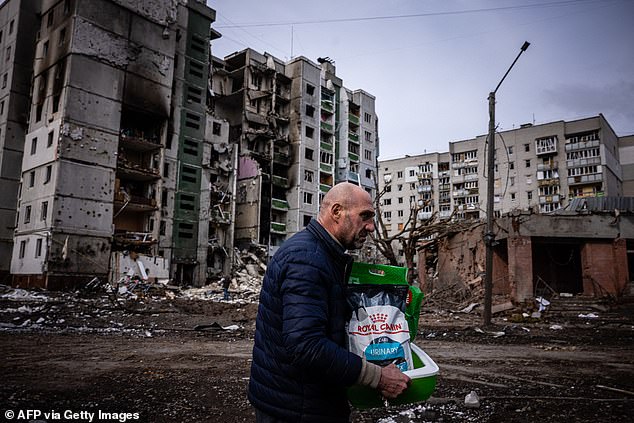 A man walks in front of a residential building damaged in yesterday’s shelling in the city of Chernihiv on March 4, 2022. Forty-seven people died on March 3 when Russian forces hit residential areas, including schools and a high-rise apartment building

London police’s war crimes unit on Friday launched an appeal for information about alleged atrocities in Ukraine, as part of a probe by the International Criminal Court.

The ICC’s chief prosecutor on Wednesday announced an ‘active’ investigation into possible war crimes in Ukraine, after his office received the backing of 39 countries.

Metropolitan Police detectives said they wanted ‘anyone in the UK who may have direct evidence of war crimes in Ukraine’ to get in touch.

The force’s specialist War Crimes Team has national responsibility for investigating anyone under UK jurisdiction over alleged war crimes, crimes against humanity, genocide or torture around the world.

Counter Terrorism Command chief Richard Smith said detectives were looking for any evidence from November 21, 2013 to the present day.

The evidence gathered may then be shared with the ICC. Officers at UK borders have been told to make new arrivals from Ukraine aware of the appeal.

Mayor Atroshenko called on prosecutors from the International Criminal Court (ICC) to visit Chernihiv to see the horrors being carried out by Moscow’s armies, claiming Russia has been using illegal weaponry against civilians.

The ICC’s chief prosecutor on Wednesday announced an ‘active’ investigation into possible war crimes in Ukraine, after his office received the backing of 39 countries.

Atroshenko said that Russians have not stopped bombing the city, found to the north of Ukraine and close to where the borders of Russia and Belarus meet.

‘The day before yesterday, the heaviest air strikes were inflicted on the city,’ he told the Ukrainian media outlet.

‘The pilots are just soulless scum and fascists. They dropped bombs from low altitudes into good visibility (during the day it happened).

‘They perfectly saw where they dropped huge bombs – on a residential area. It was destroyed several houses near Chornovola Street, where thousands of apartments were damaged,’ the mayor continued.

He said that he had personally witnessed 25 to 30 bodies being pulled from the rubble of destroyed residential buildings.

However, he said he could not say how many people in total had been killed.

‘These people who were wounded are already much more than 300,’ he said. 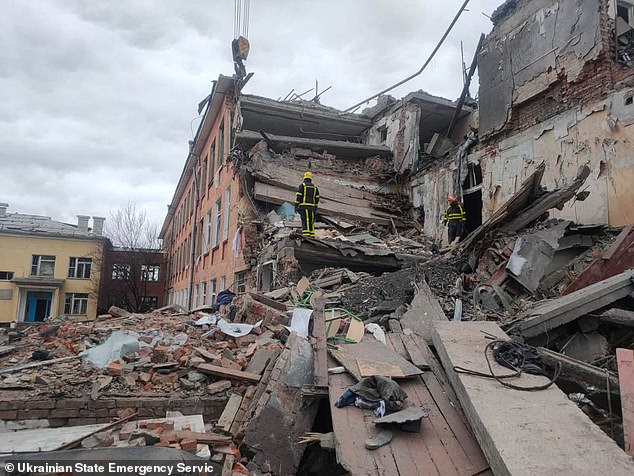 This handout picture taken and released by the Ukrainian State Emergency Service on March 7, 2022, shows rescuers dismantling the rubble of a destroyed school after Russian troops shelled the city of Chernihiv

Due to its strategic location, Chernihiv has experienced some of the most intense fighting since Putin ordered his forces to invade Ukraine on February 24.

Forty-seven people were killed in Russian air strikes on a residential district of Chernihiv on Thursday, regional authorities said on Friday, updating an earlier death toll of 33 killed.

The strikes hit a school and a high-rise residential building.

Rescue work had to be suspended Thursday due to heavy shelling, according to the local emergency services.

A senior US defence official said on Sunday that the US assesses that about 95% of the Russian forces that had been arrayed around Ukraine are now inside the country.

The official, who spoke on condition of anonymity to discuss military assessments, said Russian forces continue to advance in an attempt to isolate Kyiv, Kharkhiv and Chernihiv, but are being met with strong Ukrainian resistance.