Heart-wrenching photographs continue to show families being ripped apart and the brutal emotional toll of the Kremlin’s invasion of Ukraine as official estimates predict the number of refugees fleeing the war-torn country could hit 1.5million by this weekend.

In one image, a clearly emotional father Aleksander, 41 presses his hands up against the window as he waves his five-year-old daughter, Anna off as she leaves on an evacuation train from Kyiv.

Further west, mothers were pictured braving the freezing cold and cradling their young children their arms as thousands of refugees packed onto transport bound for Poland in Lviv.

Refugees, both young and old have been forced out of their homeland. One picture showed a wheelchair-bound Ukrainian refugee, 90, being consoled by members of the Romanian Emergency Situations Department after she fled her country.

Other photographs show huge crowds of families, some carrying children, beloved pets and their essential belongings, amassing at train stations and bus stops across parts of Ukraine that are yet to fall to Russian troops.

In neighbouring Poland, humanitarian charities were seen handing out hot food and drinks to the refugees, many who had been waiting more than 12 hours to cross, as the number arriving topped 700,000 with a million expected by early next week.

International aid agencies have warned of an impending humanitarian crisis not seen on the continent for more than 75 years as essential supplies run low in Ukraine and the Kremlin continues its illegal indiscriminate shelling of military targets, homes and businesses.

The United Nations refugee agency has since warned the Russian invasion has prompted Europe’s ‘fastest moving refugee crisis’ since the end of World War Two.

It comes as the dire humanitarian crisis ramped up on Saturday when Russia was accused of derailing a promised ceasefire by shelling the strategic port city as Vladimir Putin’s terrifying war enters its 10th day. 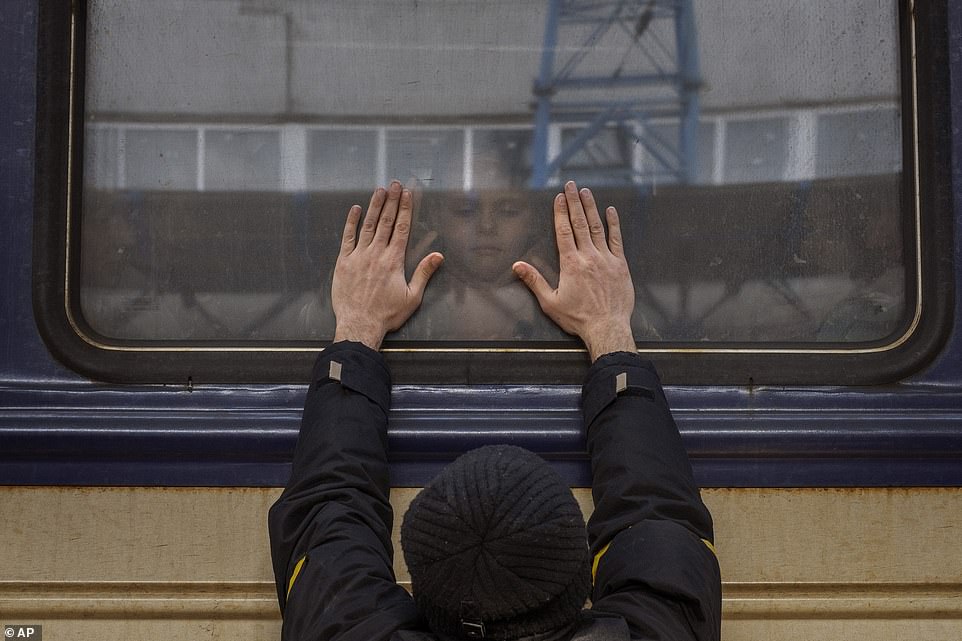 A clearly emotional father Aleksander, 41, presses his hands up against the window as he waves his five-year-old daughter, Anna off as she leaves on an evacuation train bound for Lviv on Friday 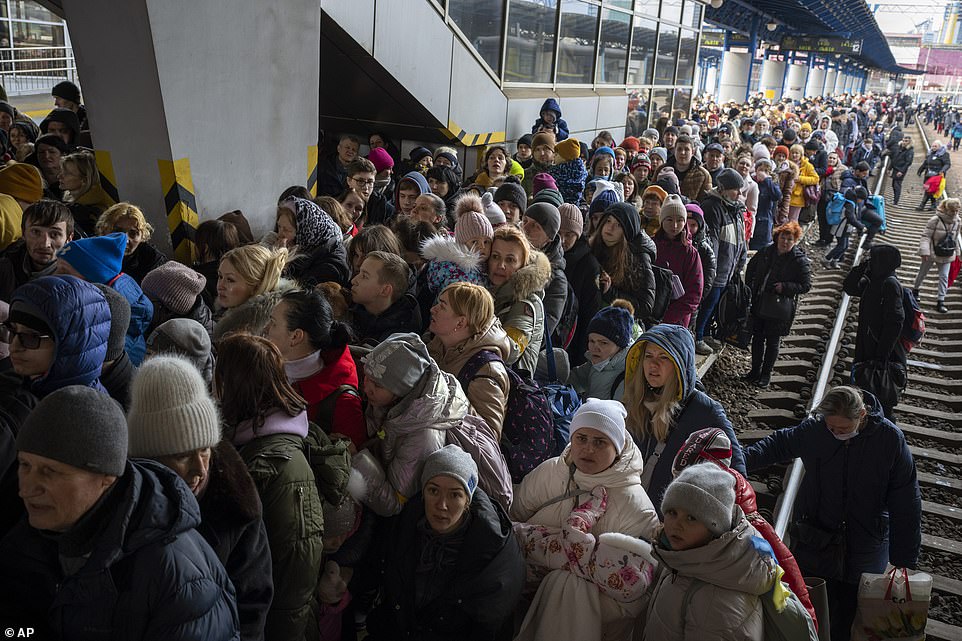 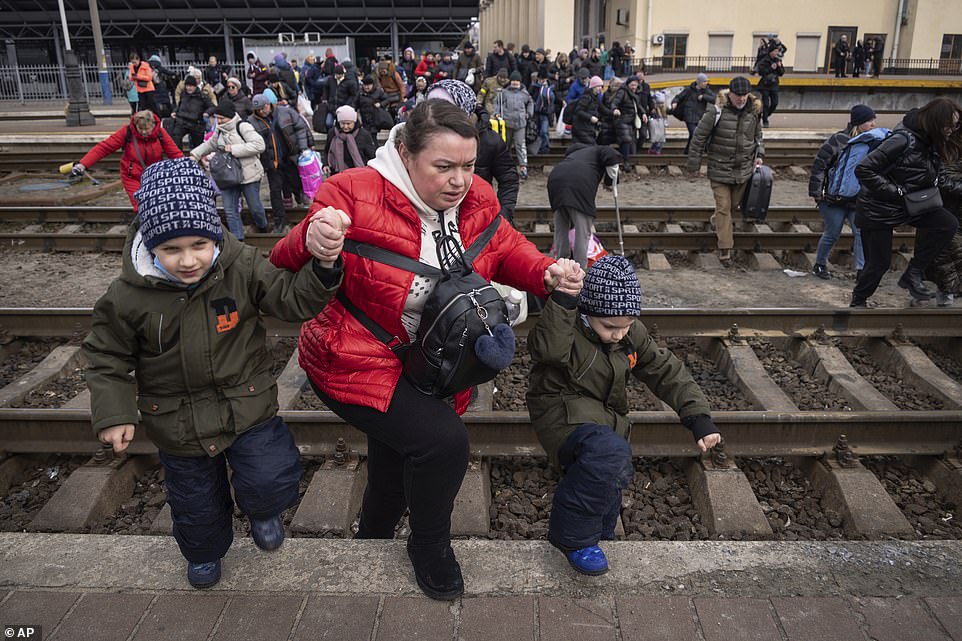 Women and children desperately jump across train tracks as they try and board an evacuation train bound for Lviv, western Ukraine 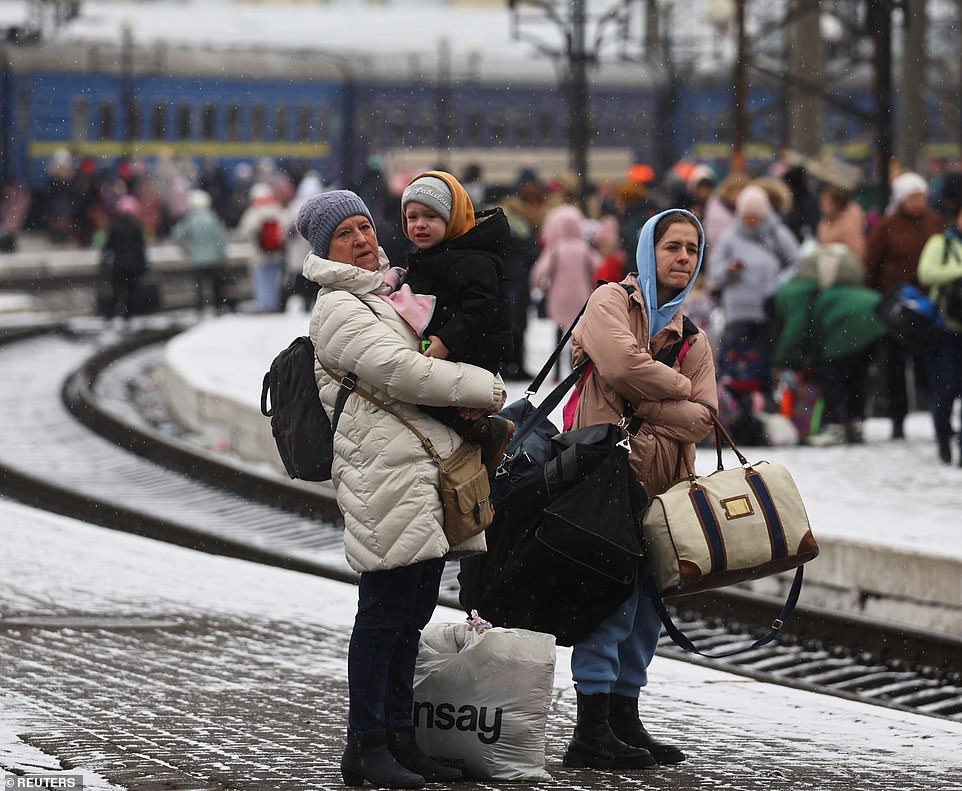 Two women and a young child wait for a train heading to Poland at the train station in Lviv, western Ukraine on Saturday, March 5 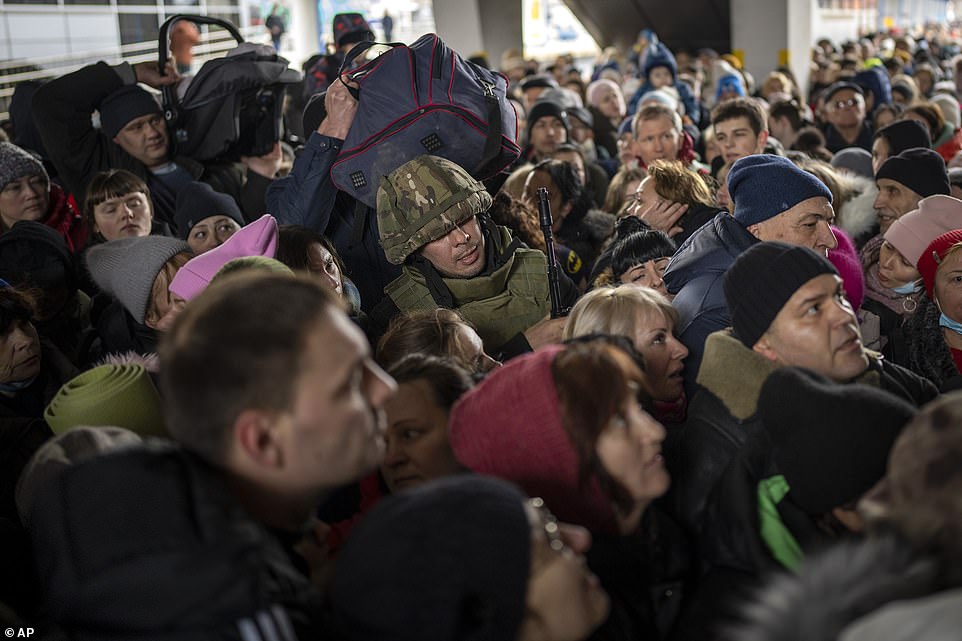 A Ukrainian soldier tries to disperse the crowd as they push to enter a train to Lviv at the Kyiv station, Ukraine. Men aged 18-60 were ordered to stay to fight in the war while women and children are leaving the country to seek refuge in a neighboring country 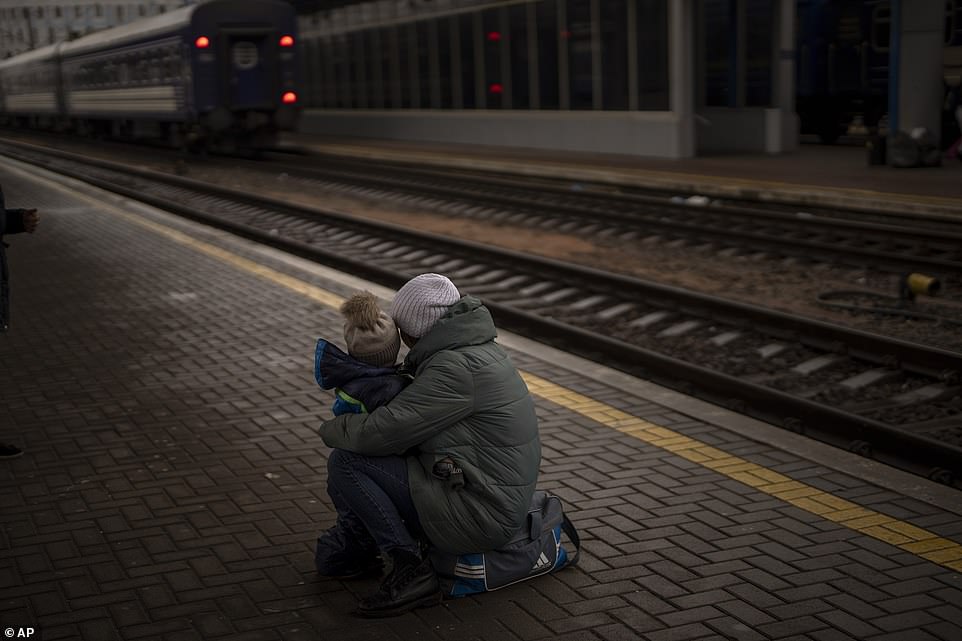 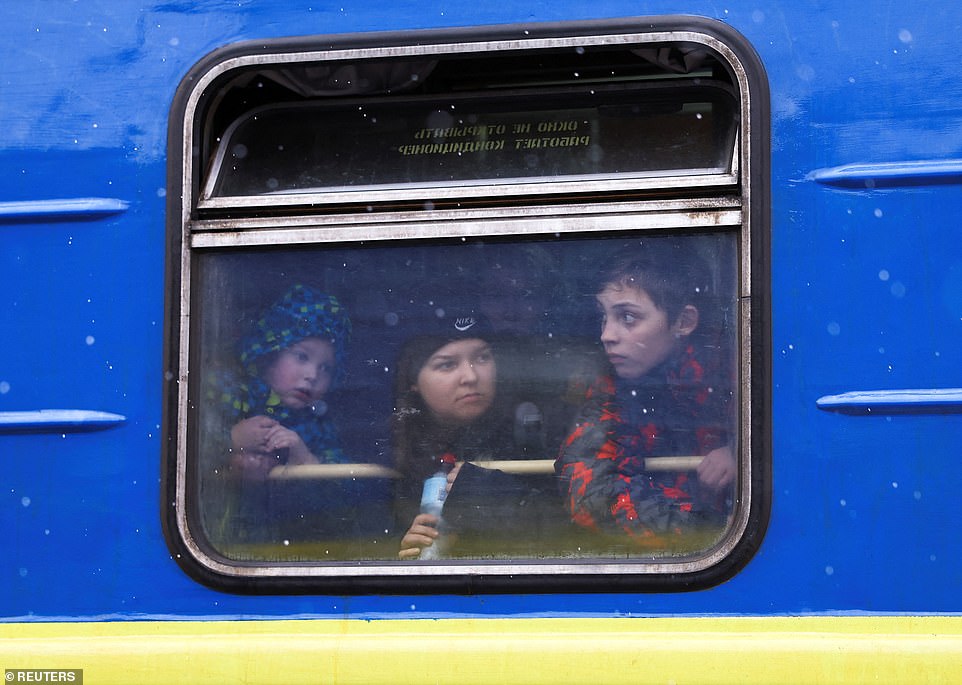 Children peer out of the window from aboard an evacuation train bound for Poland as they set off from Lviv train station on Saturday, March 5 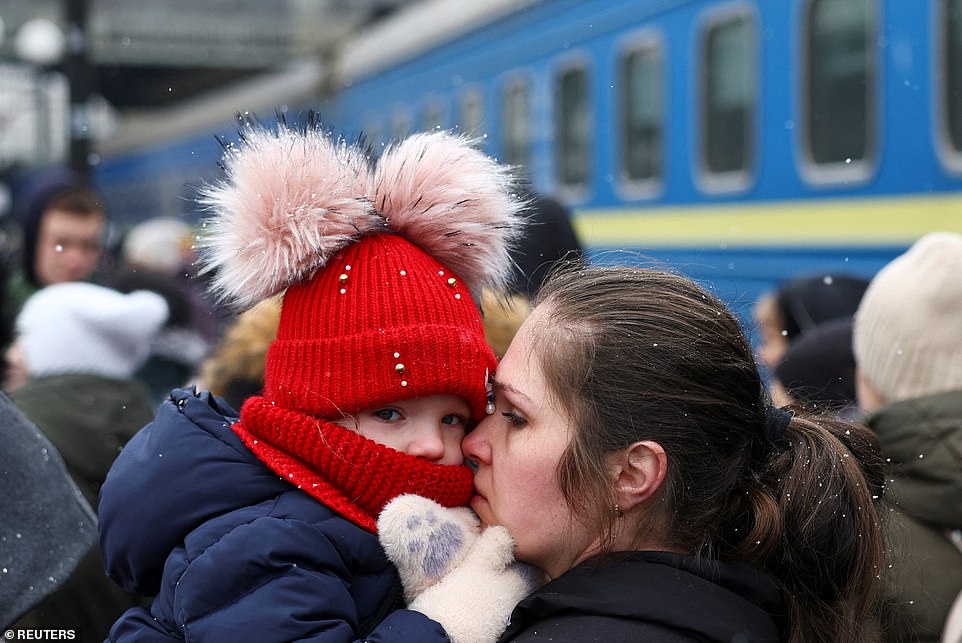 A mother braves the freezing cold and cradles her young daughter in her arms at Lviv train station, western Ukraine, as thousands of refugees flee from the Russian invasion 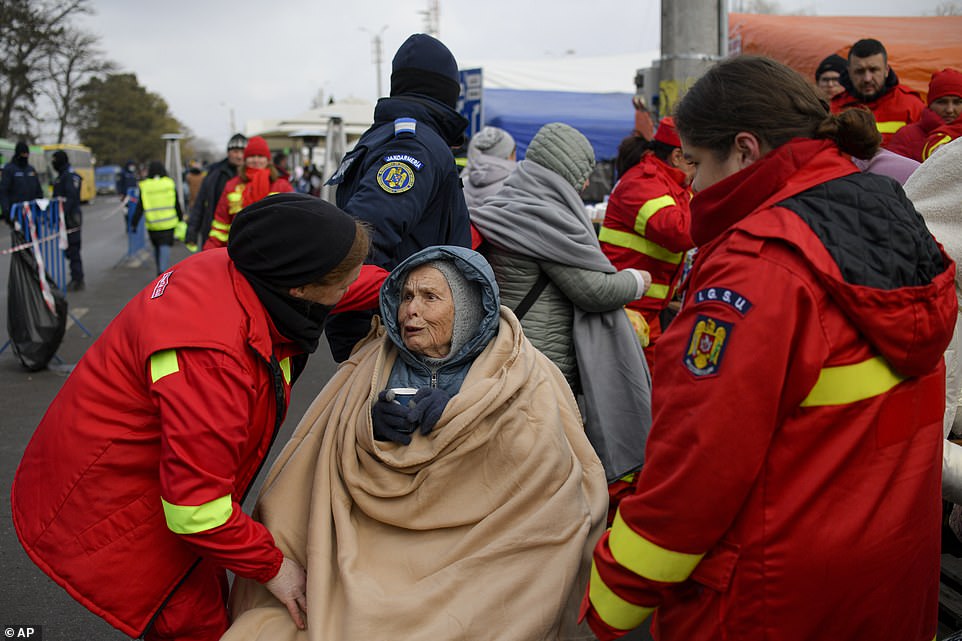 A wheel-chair bound Ukrainian refugee, 90, is consoled by members of the Romanian Emergency Situations Department after she fled her country following the Russian invasion 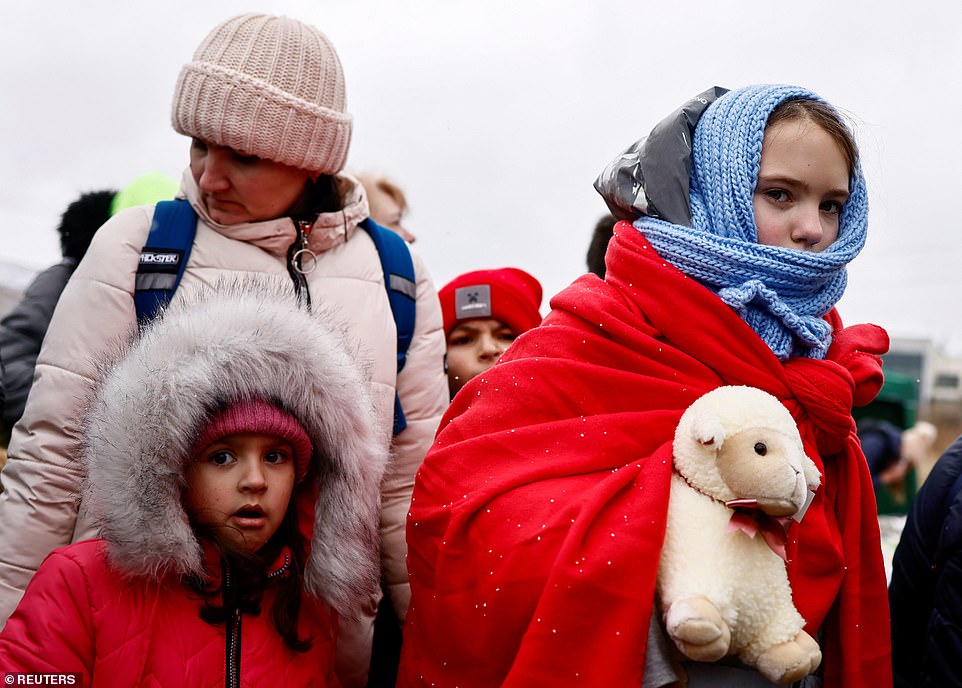 Two Ukrainian children, one holding a stuffed animal, wait as they queue to board a bus at the border check point in Medyka, Poland 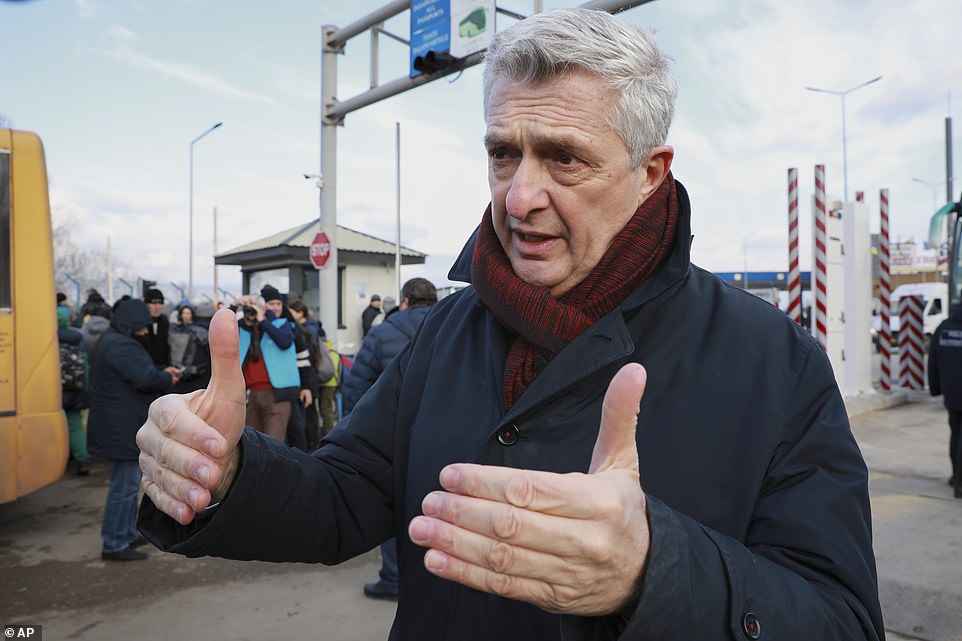 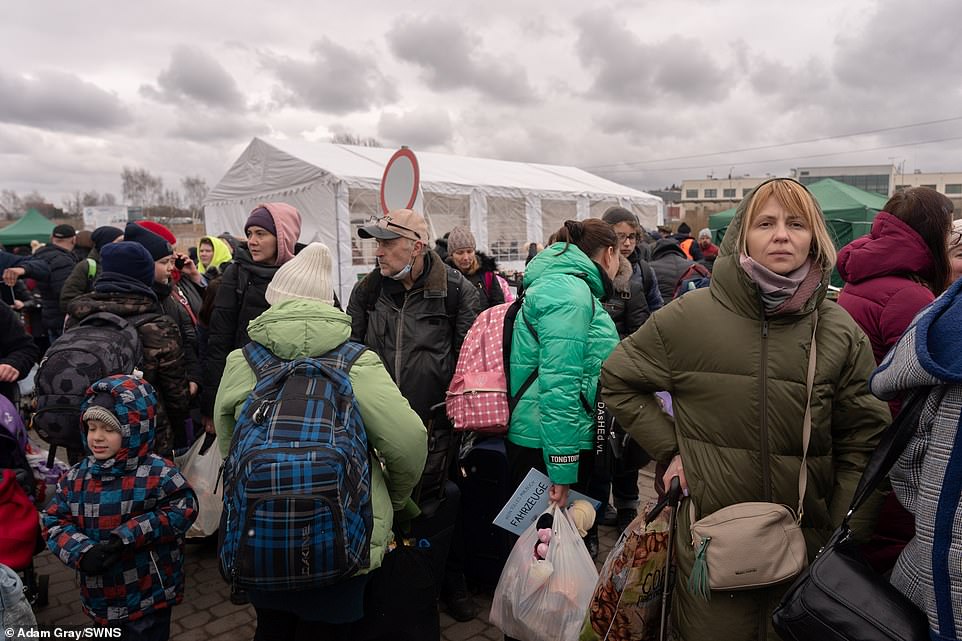 Ukrainian refugees, cradling their last remaining belongings in backpacks and shopping bags, wait for further transport after arriving into the Polish border on Saturday, March 5 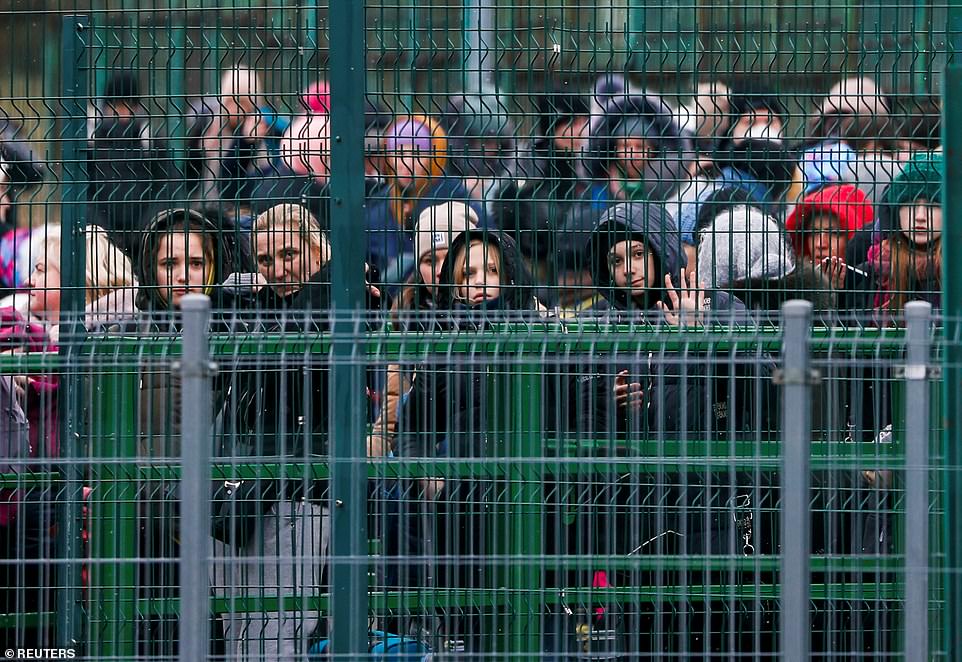 Poland has already accepted an estimated 700,000 Ukrainian refugees since Vladimir Putin’s bloody war with Ukraine began on February 24. Pictured: People queue as they wait to cross the Medyka border in Poland 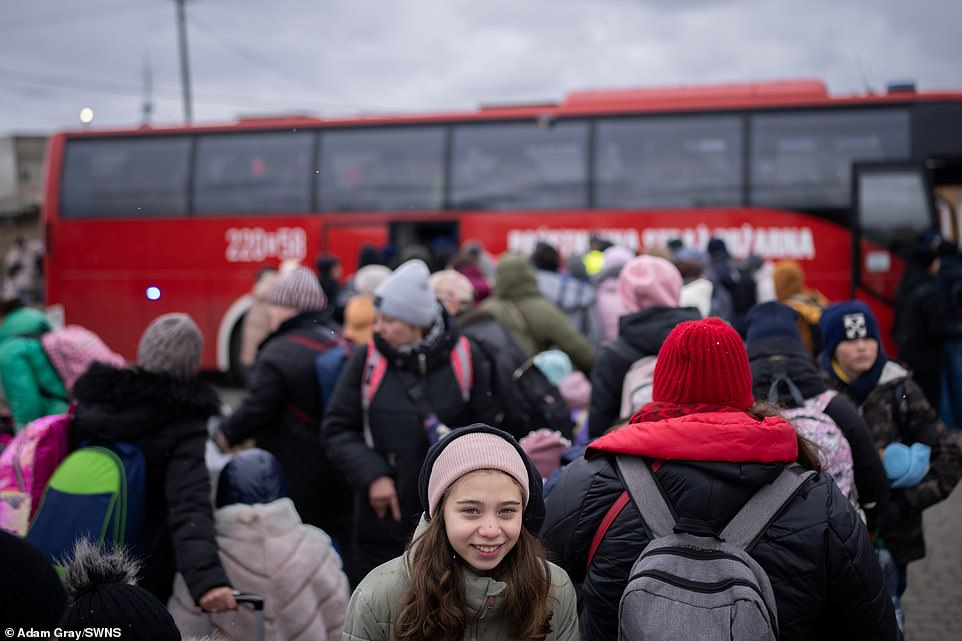 A young girl can be seen smiling on Saturday, March 5 after she safely arrived into Poland after fleeing from Ukraine 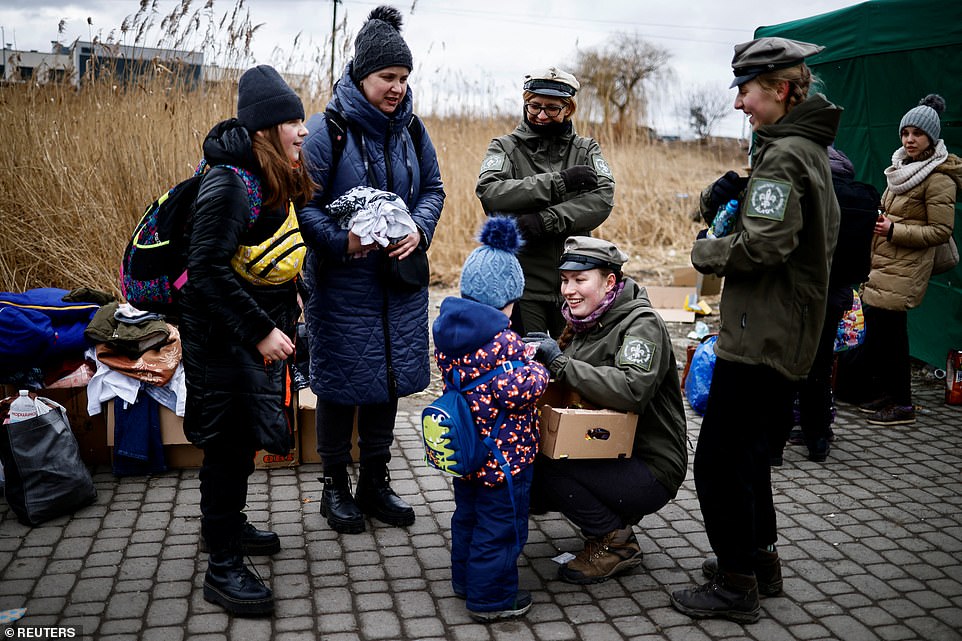 Members of the Polish scouts smile as they hand out sweets to young Ukrainian refugees who have arrived at the border checkpoint in Medyka, Poland on Saturday, March 5

While women, children and those aged over 60 are eligible to flee the country if they wish, all men aged between 18 and 60 were ordered to remain in Ukraine to fight Russian invaders.

But the dramatic declaration of martial law has also forced relatives to now live thousands of miles apart as Ukraine faces its gravest challenge since its independence in 1991.

It comes as the number of refugees fleeing the Russian invasion could potentially rise to 1.5 million by the end of the weekend from a current 1.3 million, the head of the U.N. refugee agency said on Saturday.

‘This is the fastest moving refugee crisis we have seen in Europe since the end of World War Two,’ UNHCR head Filippo Grandi said.

Grandi also said most refugees at the moment were linking up with friends, family and other connections already living in Europe, but warned future waves would be more complex.

Foreign Minister Zbigniew Rau said Poland had already taken in more than 700,000 refugees from Ukraine and that he expected hundreds of thousands more in the coming weeks unless Russia backs down.

‘Poland will never recognize territorial changes brought about by unprovoked, unlawful aggression,’ he said, adding that his country will demand that alleged Russian war crimes committed in Ukraine will be prosecuted.

Aid agencies have warned of a humanitarian disaster across the country as food, water and medical supplies run short.

Women and small children crossed at the Medyka checkpoint in southeastern Poland in freezing conditions.

A man crossing the other way yelled at the crowd that men should return to Ukraine and fight.

One woman, struggling to carry half a dozen bags, wept when the snacks she had packed for her and her young son, who was clutching a green dinosaur toy, fell to the ground.

She gave the boy a bag to carry as they trudged slowly on.

An agreed ceasefire to evacuate residents from two cities in Ukraine quickly fell apart Saturday, with officials saying work to remove civilians had halted amid shelling hours after Russia announced the deal.

Mariupol’s deputy mayor Serhiy Orlov told the BBC: ‘The Russians are continuing to bomb us and use artillery. It is crazy.

Kyiv said the evacuation west to Zaporizhzhia has been suspended ‘for security reasons’ amid allegations that Kremlin forces are pummelling the city.

‘Talks with the Russian Federation are ongoing regarding setting up a ceasefire and ensuring a safe humanitarian corridor,’ Kyrylo Tymoshenko, the deputy head of Volodymyr Zelensky’s office, said.

The Russian defence ministry said early today that it had agreed on evacuation routes with Ukrainian forces for Mariupol, a strategic port in the south-east, and the eastern city of Volnovakha.

The vaguely worded statement did not make clear how long the routes would remain open.

Deputy head of his office Kyrylo Tymoshenko said: ‘The Russian side is not holding to the ceasefire and has continued firing on Mariupol itself and on its surrounding area.

‘Talks with the Russian Federation are ongoing regarding setting up a ceasefire and ensuring a safe humanitarian corridor.’

‘We appeal to the Russian side to stop firing,’ she said.

Russian outlet RIA Novosti carried a Russian defence ministry claim that the firing came from inside both communities against Russian positions.

The struggle to enforce the ceasefire shows the fragility of efforts to stop fighting across Ukraine as people continue to flee the country by the thousands.

Mr Zelensky said: ‘We are doing everything on our part to make the agreement work.

‘This is one of the main tasks for today. Let’s see if we can go further in the negotiation process.’ 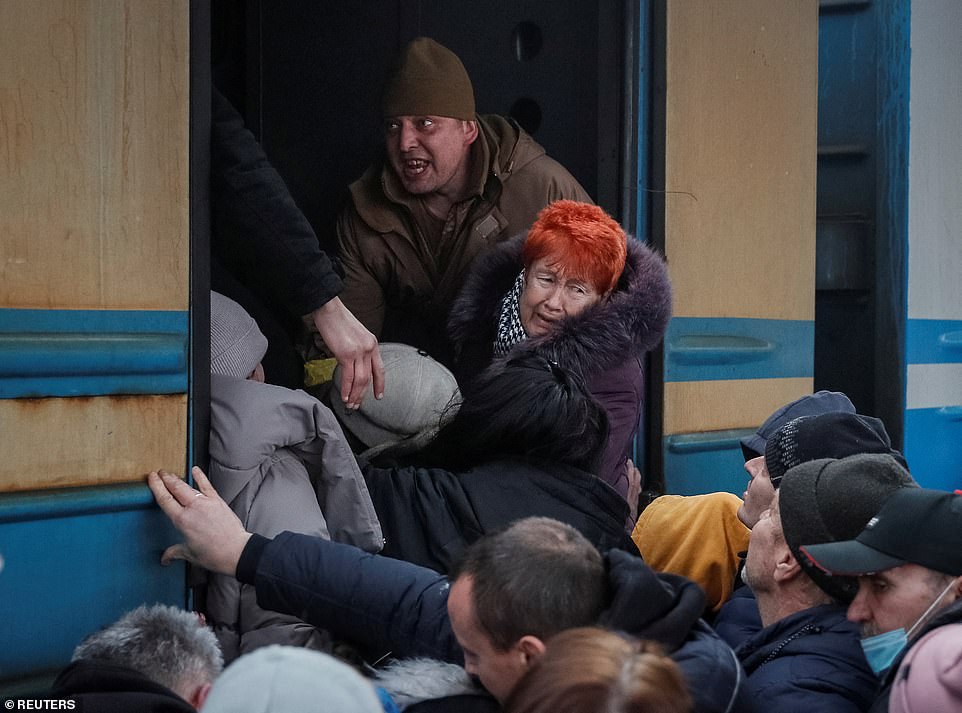 Pictured: A tearful woman is helped aboard an evacuation train from the Ukrainian capital of Kyiv 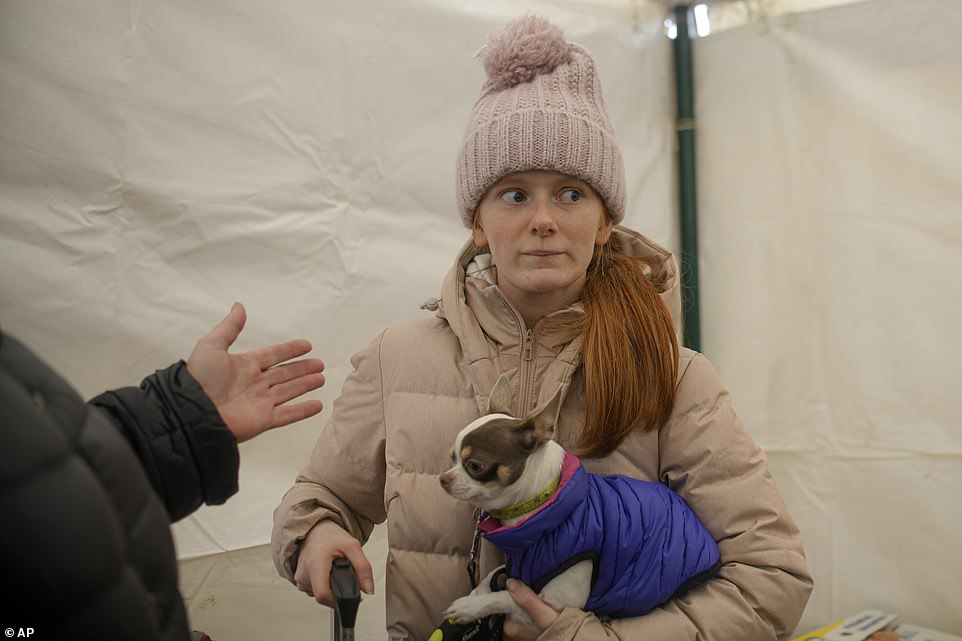 15-year-old Ukrainian refugee Margot holds her dog inside a tent at the Romanian-Ukrainian border, in Siret, Romania, Saturday, March 5, 2022 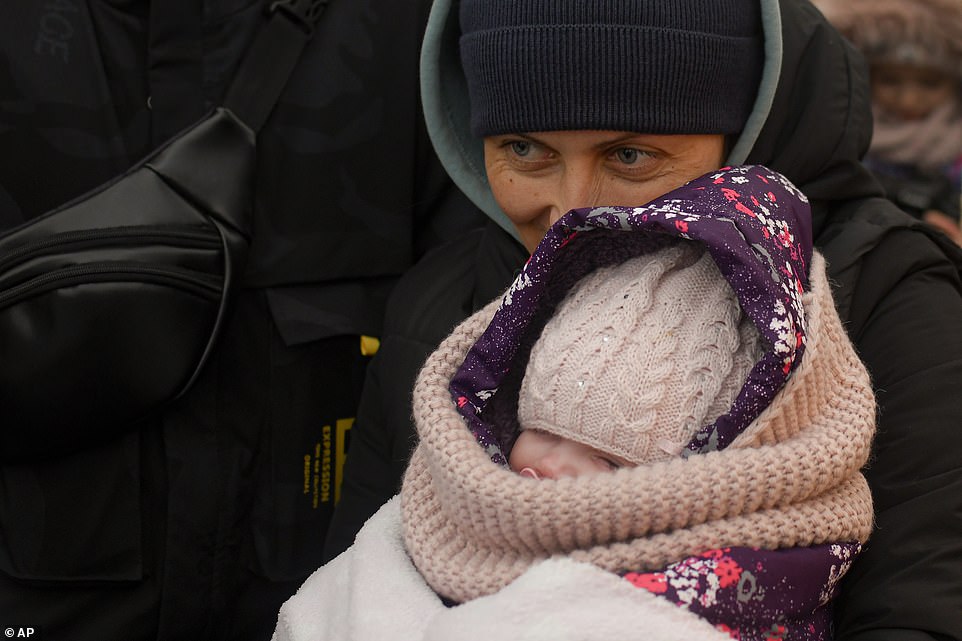 A refugee fleeing the conflict from neighbouring Ukraine holds a child inside a tent at the Romanian-Ukrainian border, in Siret, Romania, Saturday, March 5, 2022 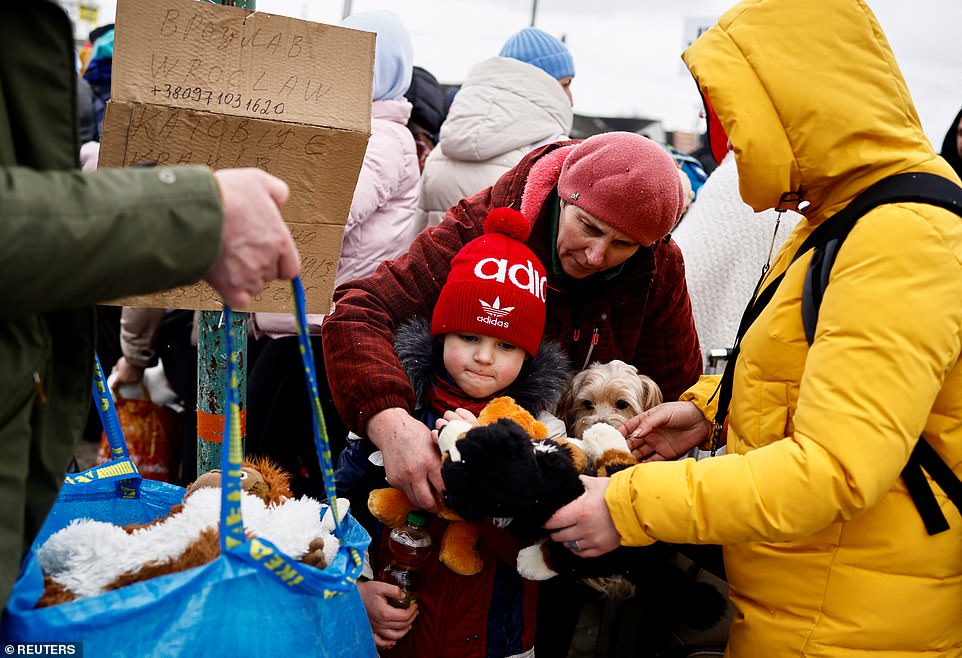 A young Ukrainian child receives a plush animals after fleeing the Russian invasion of Ukraine, at the border checkpoint in Medyka, Poland on Saturday March 5 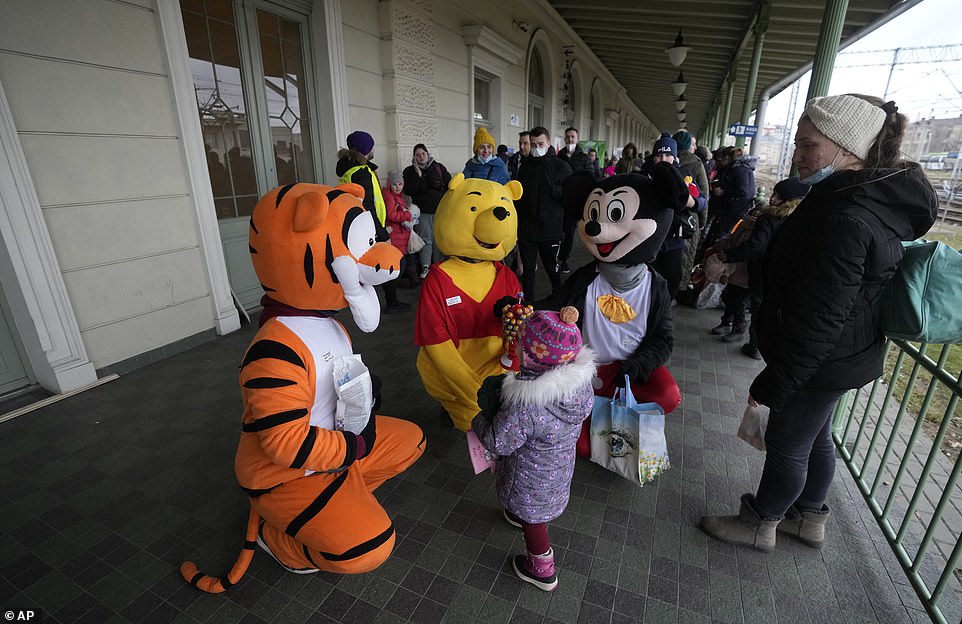 Volunteers dressed in animal costumes and Disney characters entertain a small child, who arrived from Ukraine, at the train station in Przemysl, Poland, Saturday, March 5, 2022 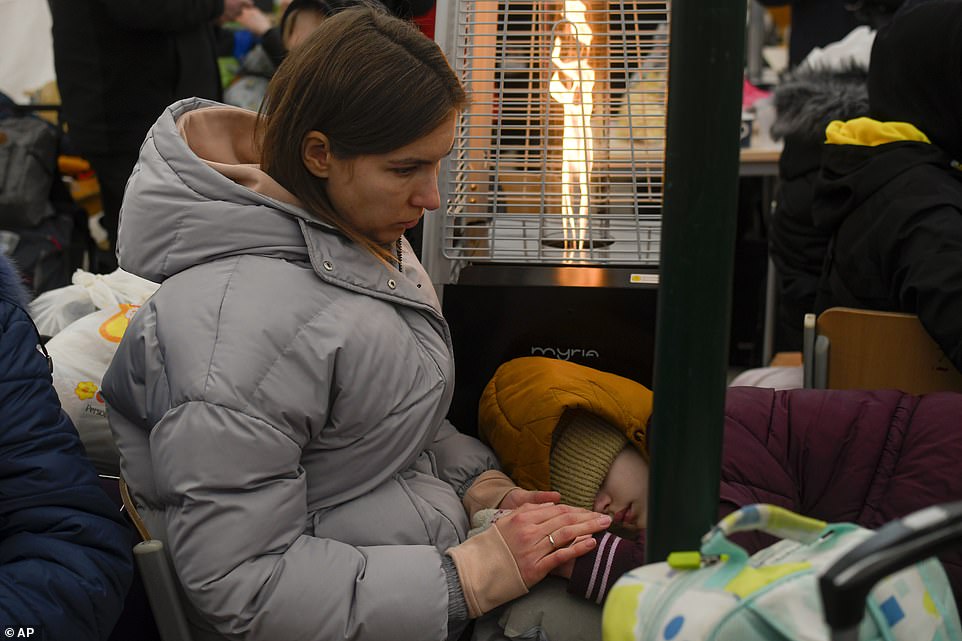 A despondent-looking mother clasps her hands over her child’s as she takes refugee near to a fire under a tent at the Romania-Ukraine border in Siret on Saturday, March 5 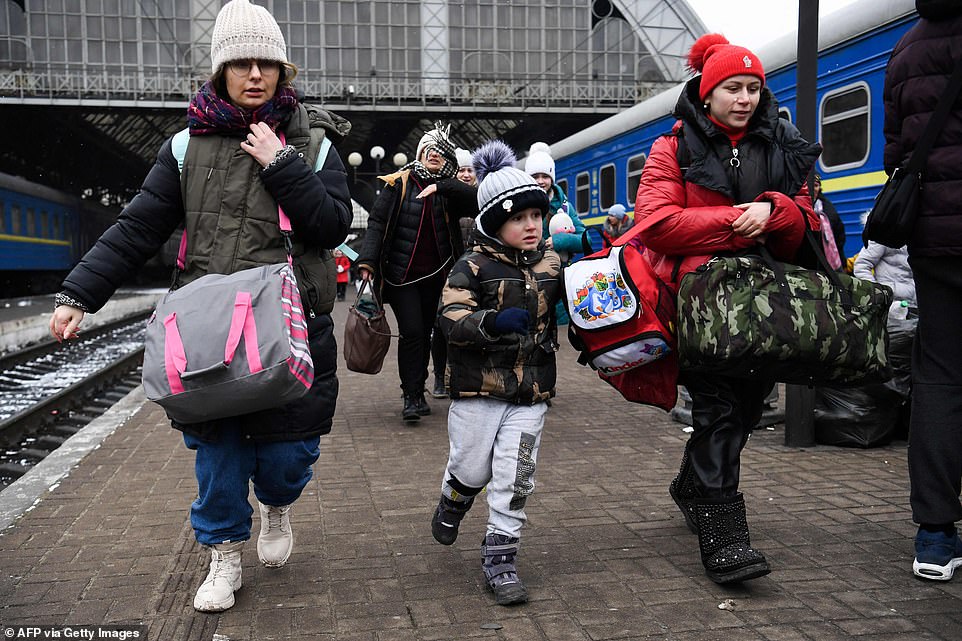 Evacuees carrying their belongings in backpacks rush to board a train bound for Poland, at the Lviv train station, western Ukraine, on March 5, 2022 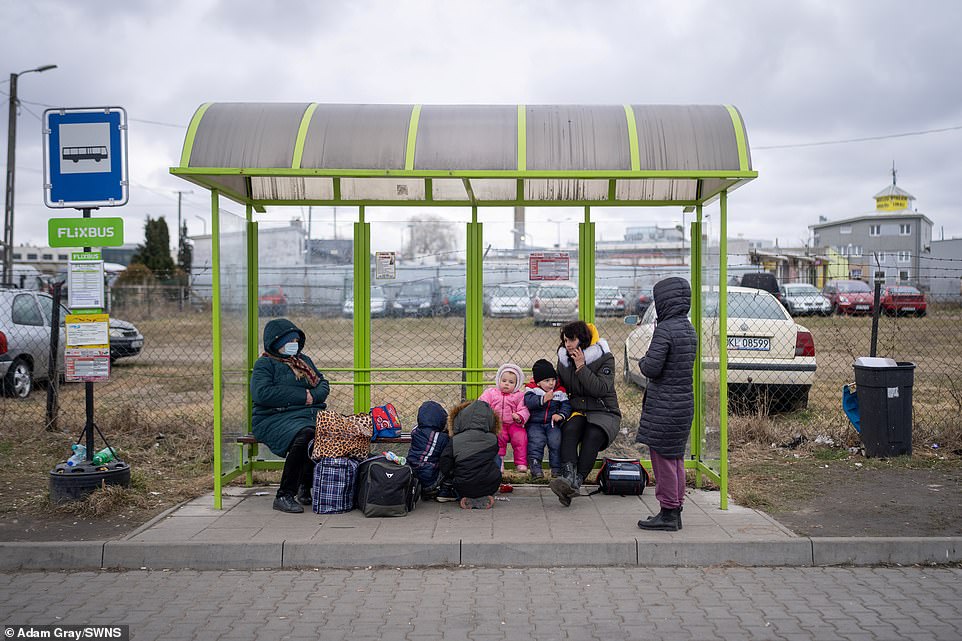 Ukrainian refugees wait for further transport after arriving across the border to Medyka, Poland on Saturday 5 March 2022 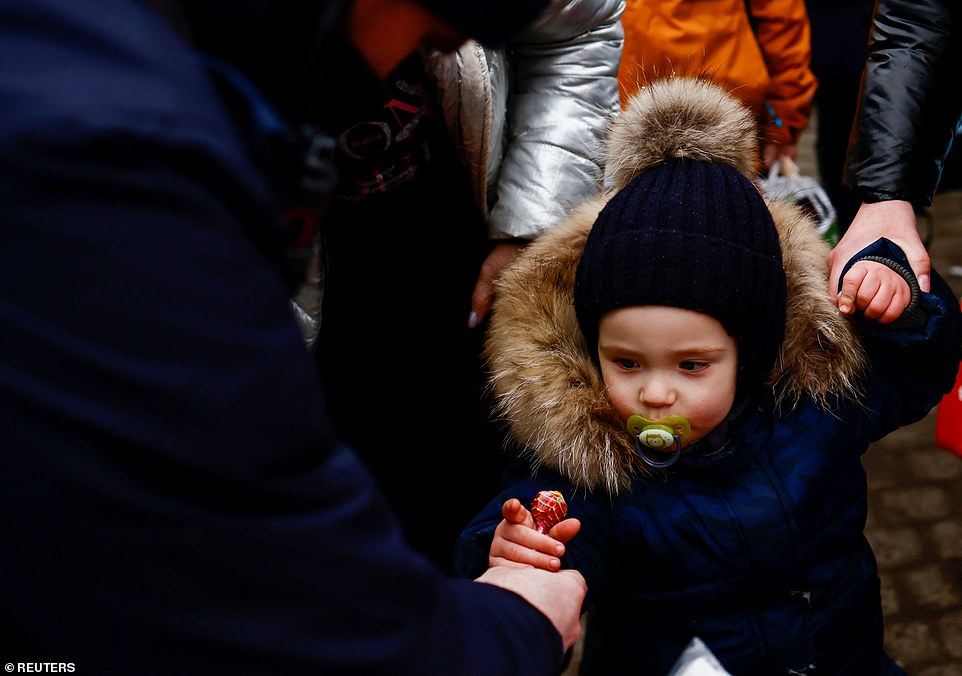 A Polish police officer gives a lollipop to a child, as refugees flee Russia’s invasion of Ukraine, at the border checkpoint in Medyka, Poland, March 5, 2022 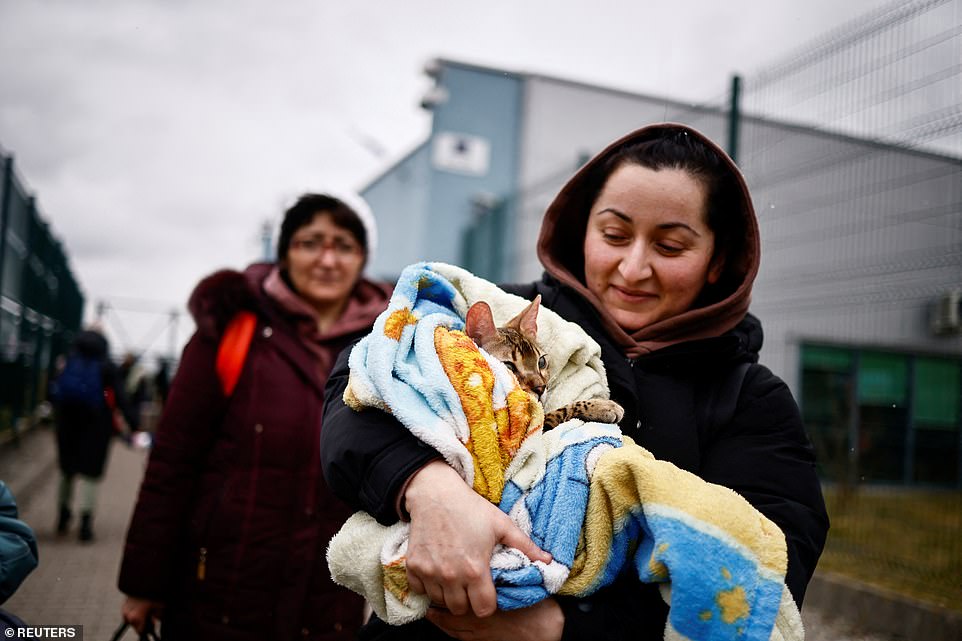 A Ukrainian refugee stuffs her cat into a roll of blankets to keep it warm as she arrives at the border checkpoint in Medyka, Poland 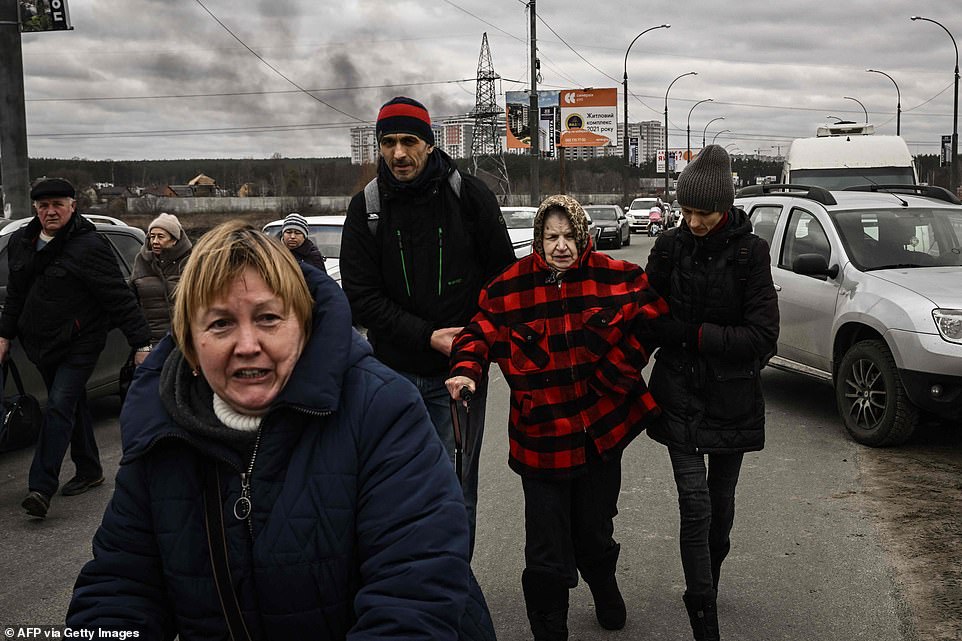 Residents evacuate the city of Irpin, northwest of Kyiv, during heavy shelling and bombing on Saturday March 5, 2022

Mariupol had become the scene of growing misery amid days of shelling that knocked out power and most phone service and raised the prospect of food and water shortages for hundreds of thousands of people in freezing weather. Pharmacies are out of medicine, Doctors Without Borders said.

The head of Ukraine’s security council, Oleksiy Danilov, had urged Russia to create humanitarian corridors to allow children, women and the older adults to flee the fighting, calling them ‘question number one’.

Meanwhile, diplomatic efforts continue as US Secretary of State Antony Blinken arrived in Poland to meet with the prime minister and foreign minister, a day after attending a Nato meeting in Brussels in which the alliance pledged to step up support for eastern flank members.

Mr Zelensky has lashed out at Nato for refusing to impose a no-fly zone over his country, warning ‘all the people who die from this day forward will also die because of you’.

Nato said a no-fly zone could provoke widespread war in Europe with nuclear-armed Russia. But as the United States and other Nato members send weapons for Kyiv and more than one million refugees spill through the continent, the conflict is already drawing in countries far beyond Ukraine’s borders.

Russia continues to crack down on independent media reporting on the war, also blocking Facebook and Twitter, and more outlets say they are pausing their work inside the country.

And in a warning of a hunger crisis yet to come, the UN World Food Programme says millions of people inside Ukraine, a major global wheat supplier, will need food aid ‘immediately’.