Concerns have been raised by some charities that aid shipments for Ukraine are being delayed from reaching Europe due to customs red tape.

The post-Brexit rules for moving donations into the European Union are confusing and unclear, aid workers have said.

The Lewisham Polish Centre, a charity based in south-east London, said three of its vans loaded with sleeping bags, nappies and sanitary items for refugees were stuck in Dover for two days due to paperwork issues.

The drivers were on Friday turned away by port authorities who said they did not have the correct documentation, according to the charity’s chair.

Agnieszka Lokaj said: ‘The guys had cover letters from us that this is humanitarian aid with all the information that this is going to be distributed for the refugees, it’s not for reselling; we listed all the items.’

Every item being transported to the EU from the UK has to be accounted for under post-Brexit legislation. 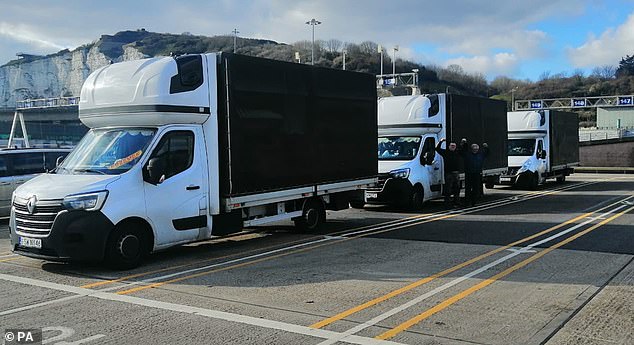 Pictured: Trucks carrying sleeping bags, nappies and sanitary items for refugees in Ukraine collected by the Lewisham Polish Centre were left stranded in Dover due to customs red tape

Officials insisted the vehicles needed T1 documents, which Ms Lokaj said would have incurred costs too high for her small organisation.

The charity was forced to suspend collection of supplies due to ‘logistical challenges’ this weekend as they struggled to get their trucks to Poland.

Meanwhile, there are reports that dozens of other lorries carrying medical supplies have yet to reach their destination due to similar hold-ups at the UK border, with one driver claiming lorries are being turned away.

‘We are not clear on the rules because everybody’s saying something else.

‘Some vans were able to get through without the T1’, Ms Lokaj said, describing the situation as a ‘waste of money, waste of time’ for busy volunteers.

The vans finally got onto a ferry on Sunday with the help of Ciaran Donovan, a St Albans-based courier who transports goods across Europe for a living.

He said: ‘What they did in the end, which is absolutely mental, is they went on a tourist ticket, which you’re not supposed to do.

Mr Donovan also said he knew of 13 other vans transporting medical equipment on behalf of charities that ‘still haven’t left the UK after four days of trying to get customs paperwork’.

The new tickets were £170 per van, a cost that had to be covered by the Lewisham Polish Centre.

The donations have now arrived in Przemysl, a Polish city on the border with Ukraine.

The charity has four more tonnes of donated goods ready to be transported to the continent, but fears this will be complicated by further customs wrangles.

Other aid organisations have appealed for financial contributions rather than specific donated items, partly because of complicated and costly transport.

Government advice is to donate money through the Disasters Emergency Committee or other trusted charities.

The Polish British Social Integration Club Wawel, a London-based community organisation, has closed its donation point and stopped shipments due to the border issues.

Its chair Kasia Zimna said: ‘When Lewisham gave us information that (their vans) were stuck, we didn’t send anything else.

‘Sometimes they allow you to go but this is not certain so it depends on the person on the border.

‘It’s almost feeling that we need to be cheeky but we just want to deliver the stuff, people are dying from hunger.

‘It’s quite heart-breaking for us because we have resources, but the law isn’t helping’.

The organisations have urged the governments of the UK, France and the Netherlands to urgently clarify guidance for trucks carrying humanitarian goods across their borders.

The Dutch Embassy in the UK said customs procedures in the Netherlands have been temporarily simplified for Ukraine aid arriving from the UK.

‘Humanitarian relief goods are now treated as non-commercial goods, so that they can be transported without delay,’ it tweeted. 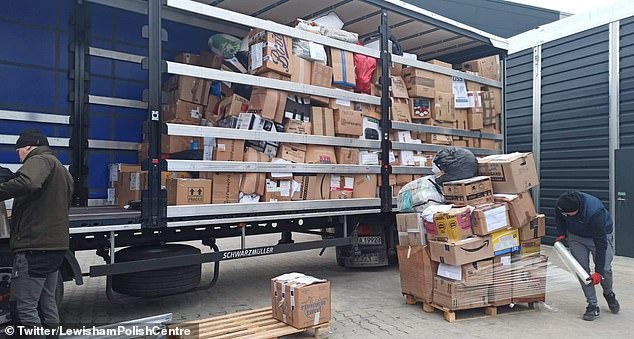 Pictured: After delays at the UK border, the Lewisham Polish Centre confirmed supplies had reached the Polish border and were being unloaded ready to be distributed to those in need

Ellie Reeves, the Labour MP for Lewisham West and Penge, told the Lewisham Polish Centre she would raise the issue in Parliament.

She tweeted: ‘Very pleased that you got through and can now deliver the aid to those in desperate need. But it didn’t need to be so difficult & slow and I hope to get the opportunity to raise this in Parliament tomorrow.’

HM Revenue & Customs said: ‘Anyone requiring advice about transporting humanitarian aid to Ukrainian refugees can contact the free-to-use Export Support Service (ESS) or ESS helpline 0300 303 8955 which can be used by individuals, businesses or charities.

‘The UK has committed a £120 million humanitarian aid package for Ukraine to help aid agencies respond to the deteriorating situation, creating a lifeline for Ukrainians with access to basic necessities and medical supplies.

‘Our humanitarian aid takes the UK’s overall aid support for Ukraine during the current crisis to £220 million, after a £100 million economic package for Ukraine was announced earlier this month.’