A truck owned by a church supplies firm was today driven through the gates of the Russian embassy in Dublin.

People with placards were seen standing next to the gates and filming as the truck crashed into the gates of the Russian embassy.

A man was arrested following the incident, which took place at around 1.30pm on Monday, and has been detained at Rathfarnham Garda Station, according to Gardaí. 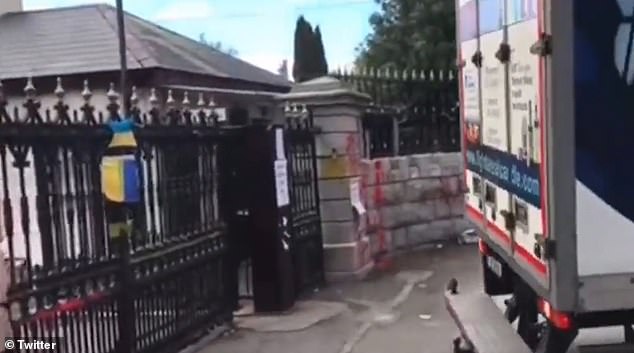 The force said it is investigating the incident of criminal damage and added that investigations are ongoing.

The scene was cordoned off and roads near the embassy remain closed. No injuries were reported after the incident in south Dublin.

A Gardaí spokesperson added: ‘Gardaí are investigating an incident of criminal damage that occurred at a property on Orwell Road this afternoon, Monday 7th March 2022 at approximately 1.30pm.

‘One male was arrested and taken to Rathfarnham Garda Station where he is currently detained under Section 4 of the Criminal Justice Act, 1984.

A spokesperson for Desmond Wisley Ecclesiastical Supplies confirmed to PA news agency that they were aware of the crash involving their lorry, but offered no further comment. 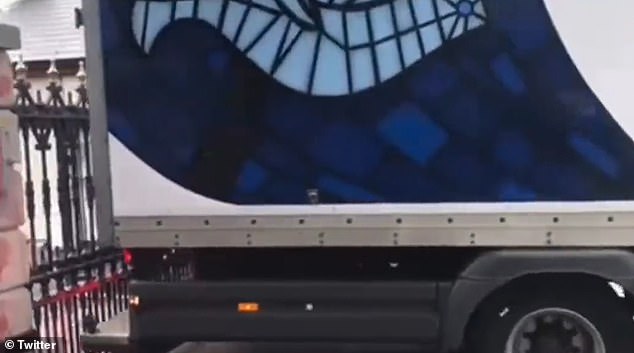 A man was arrested following the incident, which took place at around 1.30pm on Monday, and has been detained at Rathfarnham Garda Station

Dublin’s Russian embassy has been hit by a string of anti-war protests in support of the Ukraine since Vladimir Putin’s invasion of the country 11 days ago.

Protests have also taken place outside Russian embassies in other cities including London, Berlin, Paris, Copenhagen and Tokyo.

On Saturday, a priest threw red paint over the Russian embassy in Dublin and urged people in Ireland to continue to protest against the war in Ukraine.

Fr Fergal MacDonagh, from Dolphin’s Barn parish in south-west Dublin, threw the paint over the gates of the Russian embassy on Friday in protest at the invasion.

Organisers thanked him for the act on Saturday and invited him to address the rally.

‘Yesterday morning when I woke up I heard on the radio that a maternity hospital had been bombed in Ukraine during the night,’ he said.

‘It’s appalling and horrific and it’s the work on evil what is happening in Ukraine, it’s a war crime and Putin will face justice in this world or in the next.’

He added: ‘I’ve been frightened and worried and anxious all week, all the last 10 days. We must protest, the people of Ukraine must know that they are not alone.’

On Sunday, crowds again gathered outside the Russian embassy in Dublin to denounce the invasion and call for the expulsion of Russia’s Ambassador to Ireland Yuri Filatov. 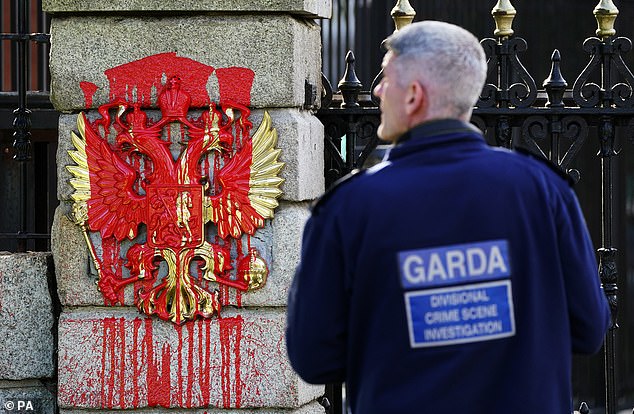 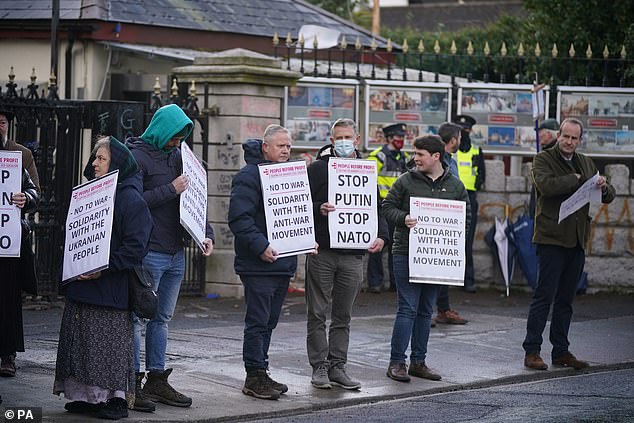 Meanwhile, a government minister confirmed that the number of Ukrainian refugees arriving in Ireland could exceed 80,000.

James Browne, minister of state in the Department of Justice, said the exodus of people from Ukraine was on a scale not witnessed in Europe since the end of the Second World War.

‘The last time we’ve seen a kind of movement like this, to this degree in Europe, was at the end of World War Two when we saw a huge movement of German people who became refugees at the end of that war,’ Mr Browne told RTE’s The Week in Politics programme.

‘Now we have learned a lot over recent years in terms of dealing with the pandemic that we do know we have that capacity and that generosity and capability within a country to mobilise when we need to in the face of a very, very serious situation.

‘But we are now potentially looking at 80,000-plus, there is not going to be any cap on those numbers coming into this country.’

His comments came as the UN announced that more than 1.5 million people have now fled Ukraine since the Russian invasion.

The updated estimate on the number of refugees expected in Ireland comes amid government efforts to bolster domestic grain production in response to the anticipated significant disruption of supply lines from Ukraine and Russia.

Around 1,400 have entered Ireland thus far, though many of those are staying with relatives who already lived in in the country.