A thug has been jailed today after a single punch he threw caused a man to fall and hit his head, leaving him with just half his skull and permanent brain damage.

Jamie Kelly, 41, suffered a catastrophic bleed on the brain and required emergency surgery after the attack in Scarborough last September.

The 41-year-old was walking near a pedestrian crossing when he was punched by Daniel George Johnson, 32, causing him to fall and hit his head on the pavement.

Johnson has been jailed for two years and five months after admitting one count of causing grievous bodily harm.

But North Yorkshire Police say Mr Kelly is likely to need specialist treatment for the rest of his life after being left with serious brain damage despite making significant progress since the attack.

Jamie’s family have since approved the release of pictures showing the attack and of Jamie’s injuries as a warning of the consequences of throwing even just one punch. 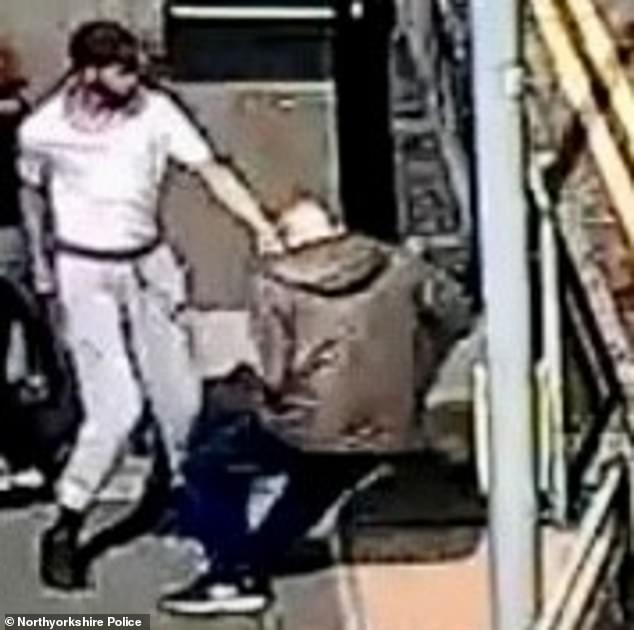 Describing the moment they received news of his son’s assault, Michael Kelly said an ex-neighbour knocked on his door and told him Jamie was being treated by paramedics.

Jamie was rushed to Hull Royal Infirmary where neurosurgeons battled for hours to save his life.

A heartbroken mother has shared her anguish in a bid to make others think before they throw a punch.

Jamie Kelly’s mother Brenda said in a statement to court: ‘When I look at my son what I should see, what I want to see, is a strong, fit, happy independent 41-year-old man.

‘But all I do see, due to a violent punch that Daniel Johnson inflicted on him, is a shell of a man.

‘A man who has to drink from a non-spill sippy cup, who needs help eating because of tremors wrack his entire body. He can’t go to the toilet or shower himself.

‘My son needs to learn to walk again because Daniel Johnson decided he would punch him, obviously intending to hurt him.

‘Jamie has so many mountains to climb due to medical issues caused by Daniel Johnson.

‘What our family has gone though, and is still going through, is senseless.

‘This is all because one so-called man thought that violence was OK.

‘Does Daniel Johnson realise that his actions alone have ensured my son has life limiting injuries?

‘One punch – that’s all it took to destroy my boy’s life as he knew it.’

In a victim impact statement read to the court, Mr Kelly said: ‘The neurologists at Hull operated on Jamie and had to remove the left side of his skull to be able to stop a severe bleed on the brain.

‘The doctors kept me informed at all times and were honest with me how seriously ill Jamie was.

‘I realised that I could lose my son at any time, but I kept my sanity by convincing myself that my son was a fighter and would pull through this nightmare.

‘I had no respite from the sickly feeling that was with me day and night as a result of my poor son’s predicament.’

Due to Covid, only Mr Kelly was permitted to see his son while Jamie’s mother Brenda was not permitted which Mr Kelly says left her distraught.

He added: ‘As days turned into weeks with Jamie still in a critical condition, I was grasping at any straw to see improvements and on October 2, Jamie briefly opened his eyes slightly, but it was enough to say that my prayers had been answered.

‘Jamie at this point was on five different anti-seizure drugs along with other medications.

‘Brenda was thrilled when I called her with the news that our son had opened his eyes briefly.

‘It was days before Jamie opened his eyes again – October 20. From this point things started to improve with Jamie following orders off the doctors and nurses to nod, open his eyes and to put out his tongue.

‘It is hard to explain but I felt so guilty not being able to see my son when I felt he needed me. It was strange how much I missed him for that one day.

‘The doctors told me that they had done all they could at Hull and Jamie was to be transferred to Scarborough Hospital on November 3.’

After months of hospital treatment, Jamie was transferred to a neurological rehabilitation facility in York on January 20 this year.

Concluding his statement, Mr Kelly added: ‘Jamie still cannot get out of bed and into the wheelchair by himself. He still cannot dress or shower himself and go to the toilet himself.

‘It is very hard to accept for Jamie as he is a proud man and desperate for independence.

‘The injury to Jamie’s brain has resulted in his body being racked with severe shakes, so much so that he cannot feed himself without his meal being thrown off the fork or spoon. 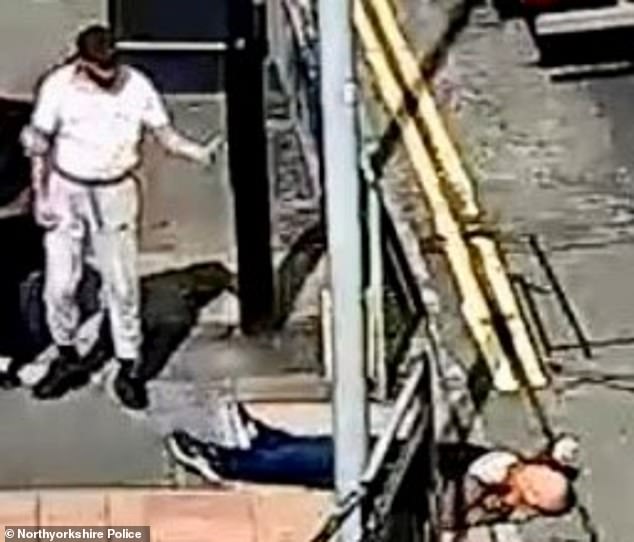 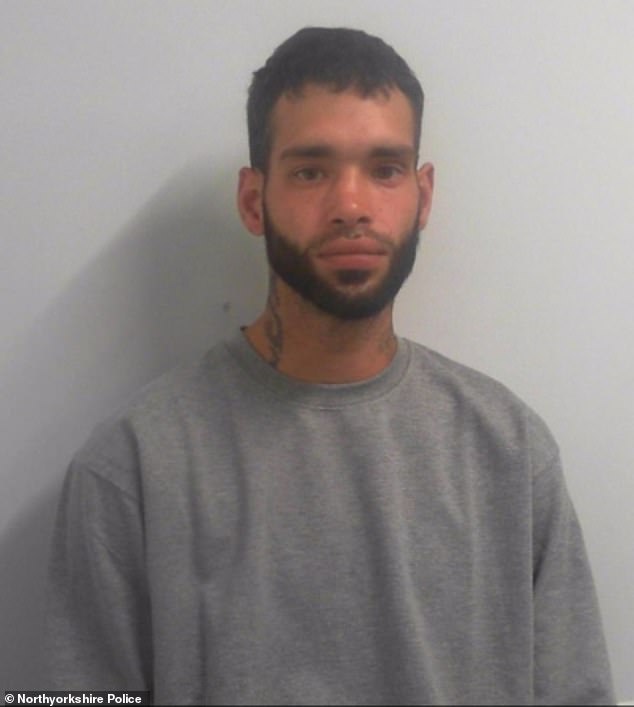 ‘He also cannot grip anything and is constantly dropping things.

‘At times Jamie gets very confused. His eyes have been severely affected and are now in the corner of the eye socket.

‘Jamie is not able to focus on anything and is now suffering severe double vision.

‘Jamie’s skull flap has still not been replaced and doctors can’t say when it can be fitted.

‘It is also possible that it can’t be replaced, and he might have to have a titanium plate fitted instead.

‘With no skull flap to hold it, Jamie’s scalp has dropped that much, half of his head is missing. He now has to wear a special padded cap whenever he is moved.

‘It is heart-breaking to see my son struggle so hard to have some quality of life and, indeed, we don’t know what the extent of his recovery will be.

‘What we do know is that Jamie will have to live with this for the rest of his life, as will we.

‘Although the person who assaulted Jamie has pleaded guilty to a lesser charge, Jamie’s injuries are no less, and I pray that the justice system will take this into account.’

Johnson was arrested nearby and was later charged with Section 18 wounding with intent to cause grievous bodily harm. 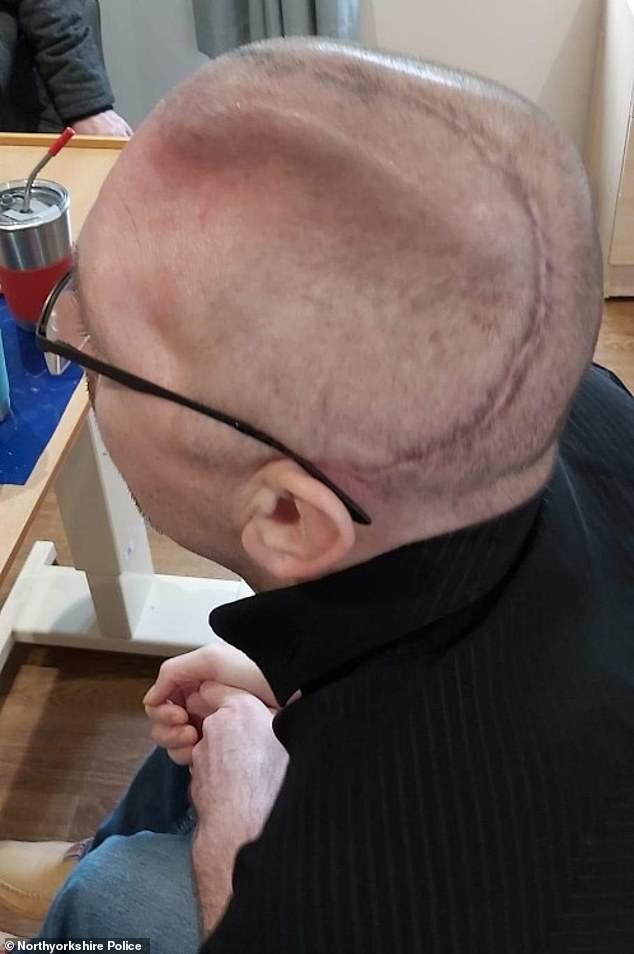 However, the court accepted a guilty plea to the lesser charge of Section 20 grievous bodily harm.

Detective Constable Peter Day, of Scarborough and Ryedale CID, led the investigation into the assault and has provided support to Jamie’s parents throughout this ordeal.

He said: ‘This has been a truly horrendous experience for Jamie and especially for his parents who thought they were going to lose their son.

‘No outcome at court will undo the devastation that Johnson caused with one punch.

‘The victim personal statements of Jamie’s parents were read out in court during the sentencing.

‘Brenda and Michael have given their blessing for North Yorkshire Police to publish the statements on the force website and on social media to show the full catastrophic impact this one punch attack has had.

‘I urge people to read them and make sure younger members of the family learn from this case.’