‘Now that President Biden has named you Border Czar in charge of the administration’s response, I want to express to you the threats and challenges caused by this administration’s open border policies,’ Abbott wrote in a letter Tuesday, obtained by Fox News Channel.

A week ago, Biden tapped Harris to ‘lead our efforts’ with Mexico and the Northern Triangle countries ‘that need help in stemming the movement’ of people toward the U.S border. 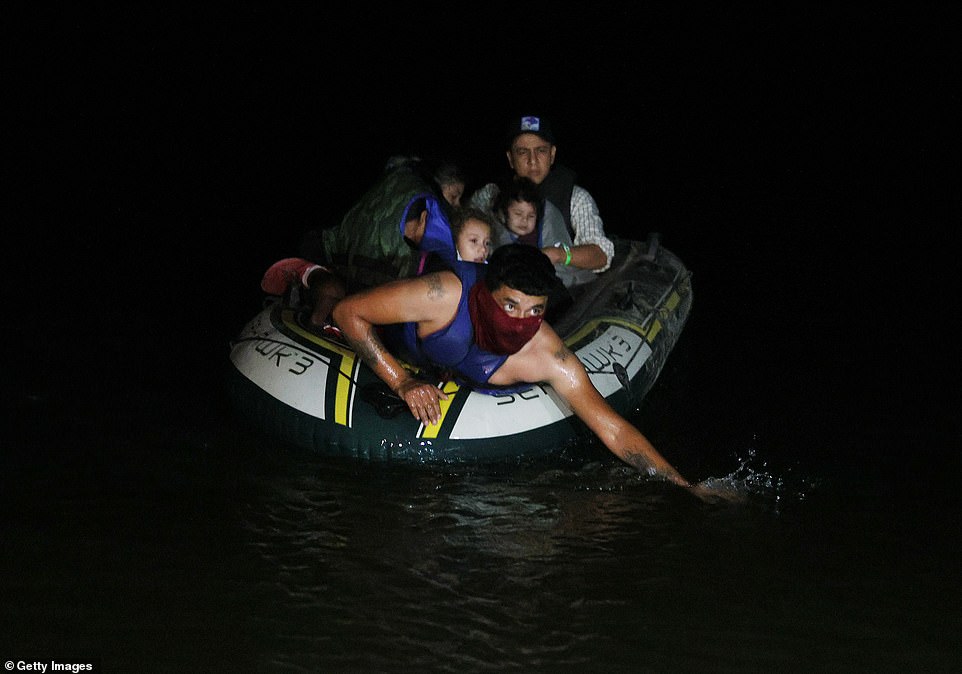 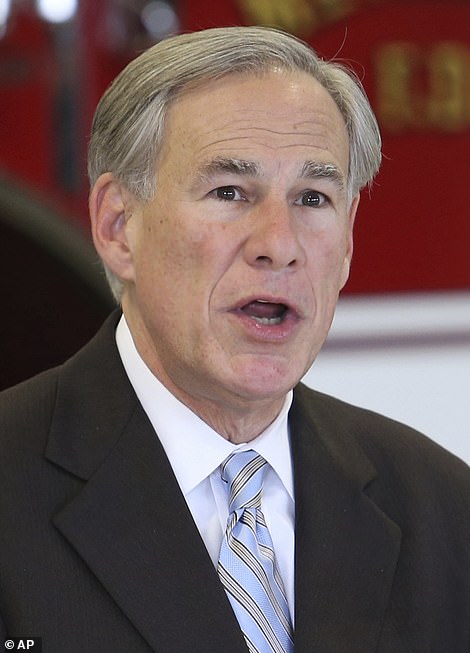 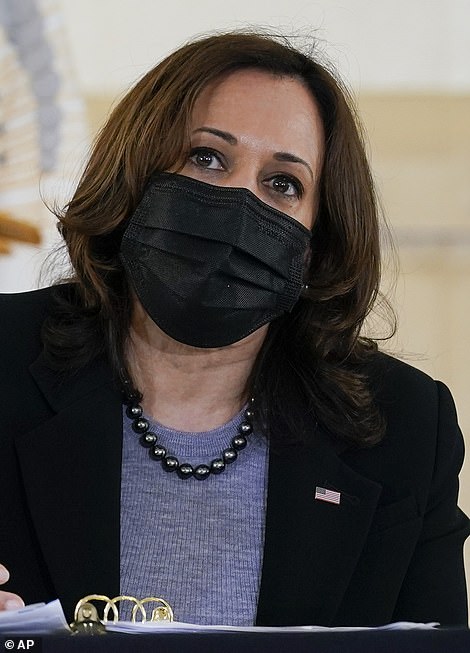 Texas Gov. Greg Abbott (left) sent a stern letter to Vice President Kamala Harris (right) over the humanitarian crisis at the U.S.-Mexico border with specific concerns about unaccompanied migrant children he suspected were being trafficked 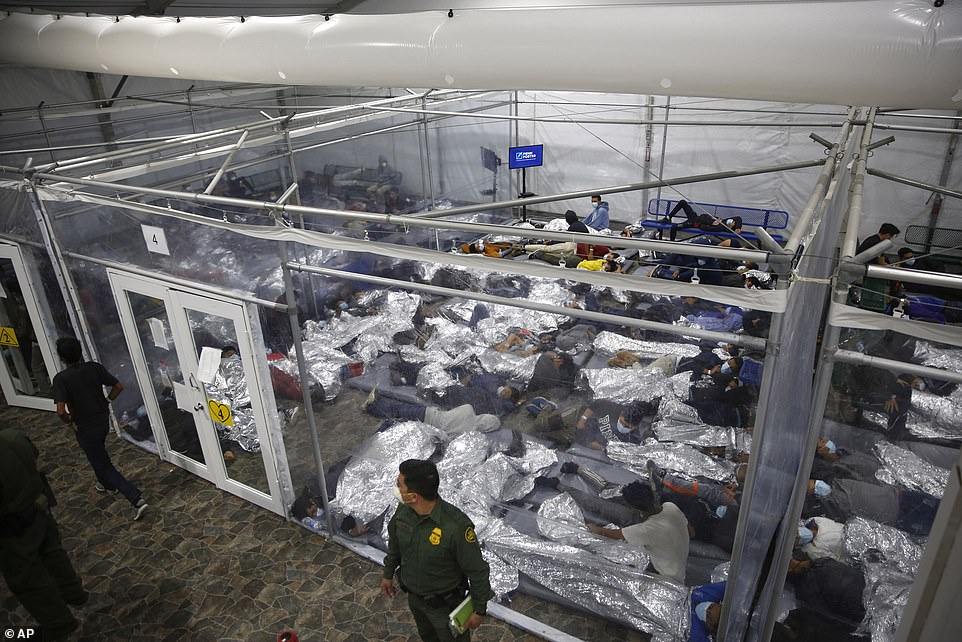 The Biden administration allowed journalists into the main detention facility for migrant children on Tuesday in Donna, Texas. Photographs show the severe overcrowding, where more than 4,000 kids and families were crammed into pods 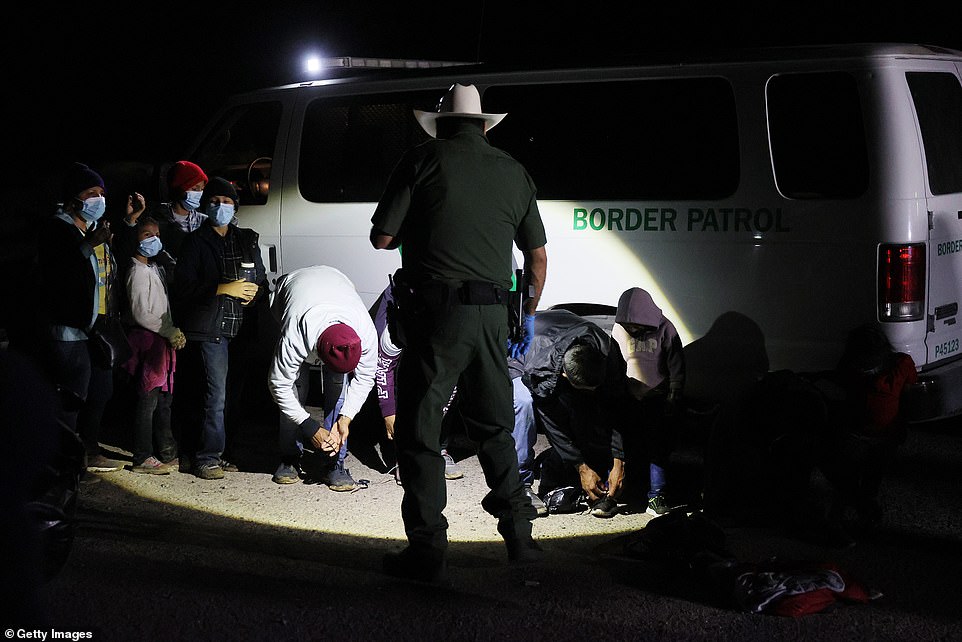 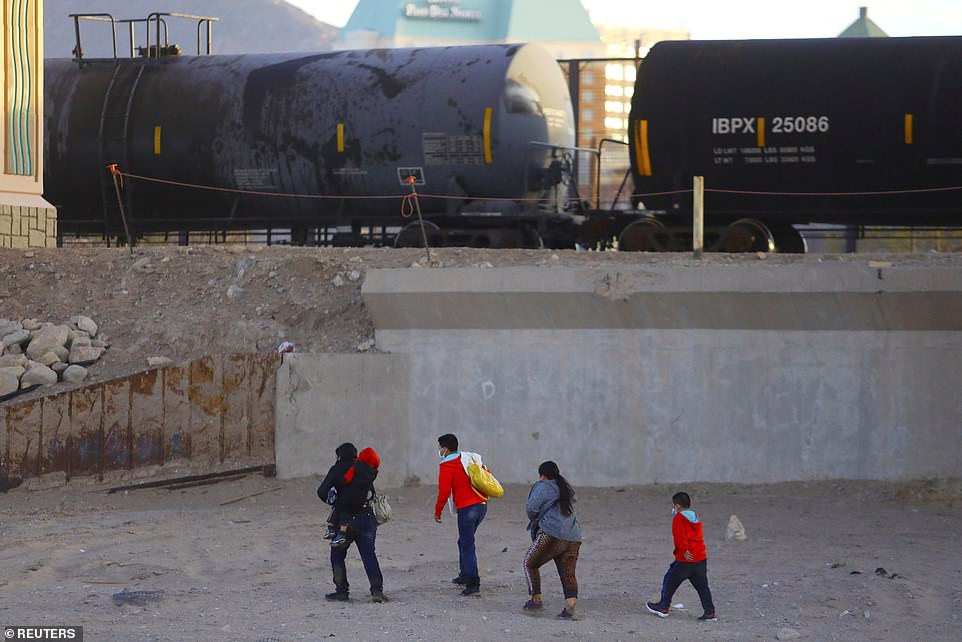 A family of migrants walks to turn themselves in to U.S. Border Patrol agents to request asylum after crossing the Rio Brvo river in El Paso, Texas 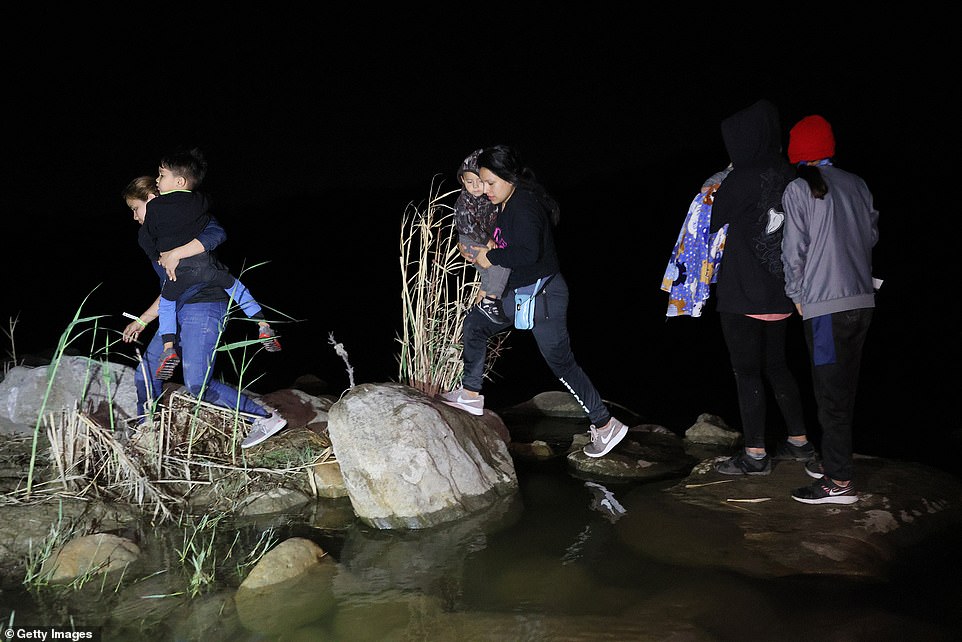 A group of migrants arrives in the U.S. after crossing the Rio Grande in a raft piloted by smugglers on Tuesday night. They turned themselves in to U.S. Border Patrol agents to request asylum after traveling from Honduras 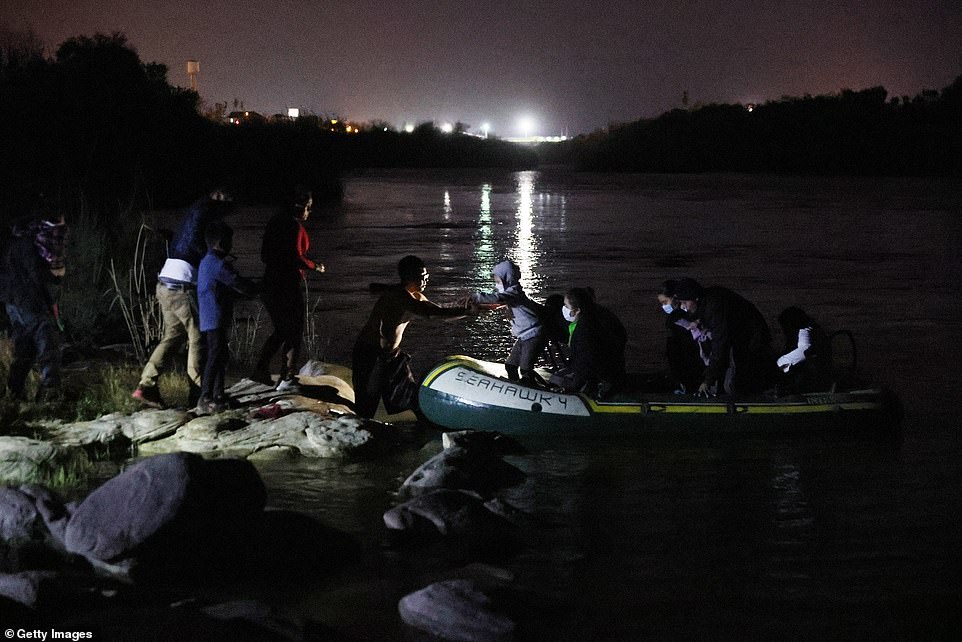 A group of migrants enters the U.S. after crossing the Rio Grande in a raft Tuesday night 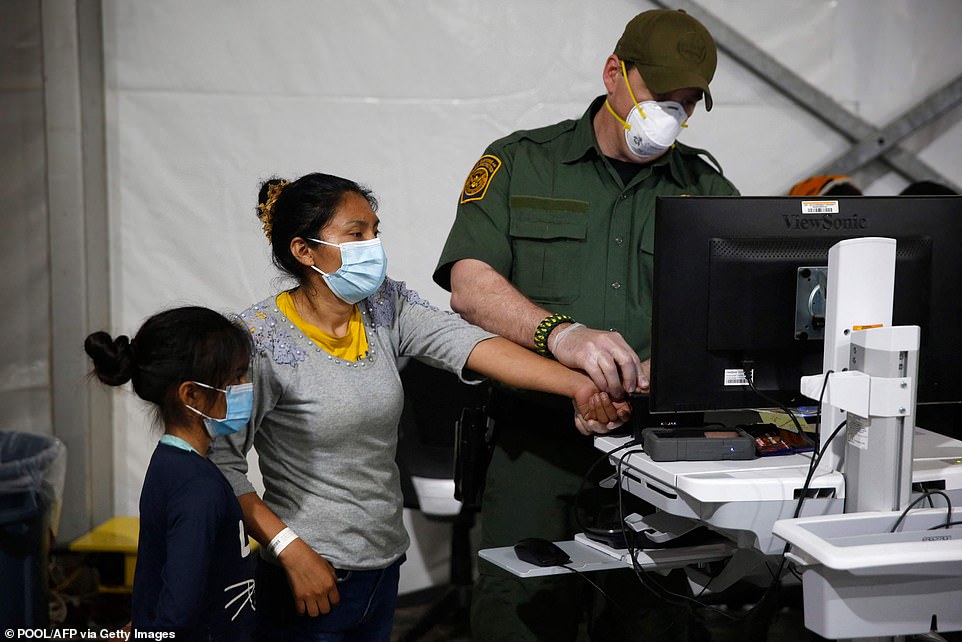 A migrant woman and her daughter have their biometric data entered at an intake area in Donna, Texas on Tuesday

That was widely interpreted as Biden putting Harris in charge of what the White House was first resistant in calling a ‘crisis’ at the U.S.-Mexico border, as migrants have flooded in.

The White House has had to clarify several times that Harris would be dealing with the root causes of migration and not, specifically, border security.

Harris will be ‘engaging with these countries; engaging with their leaders; figuring out how to invest best, how to work in partnership, how to prevent corruption from taking over; to put in place steps that will make the journey less desirable – that is certainly a big assignment and one the president is confident the vice president will take on and do well,’ White House press secretary Jen Psaki said Tuesday.

‘That was always the plan, and that was the announcement,’ Psaki added.

Still, in his letter, Abbott pointed a finger at the White House as he wrote about the humanitarian crisis on the ground in Texas, particularly for unaccompanied minors.

In a change of policy from former President Donald Trump, minors who come over the border now aren’t sent directly back and instead are supposed to go from Customs and Border Patrol custody to Health and Human Services facilities, though the spike has created a backlog.

Biden has said his administration seeks a reversal from the hardliner Trump years and wants to create a ‘fair and humane’ immigration system.

Abbott said the Biden administration’s policies ’embolden and enrich cartels, smugglers, and human traffickers who continue to ramp up their criminal operations.’

‘In many cases, these criminals lure unaccompanied minors into inhumane conditions and expose them to abuse and terror,’ he said.

Abbott sent a list of questions to Harris, including how officials are screening the children to identify potential victims of abuse.

Abbott also wanted to know how many victims of abuse have already been identified.

Abbott asked how the U.S. government is ensuring that the children aren’t being released back to traffickers in the United States – and whether DNA testing was being utilized.

‘The thought of any child suffering at the hands at human traffickers is unacceptable,’ he wrote. ‘Given your new role as the administration’s Border Czar, I urge you to visit the border to see the crisis for yourself, and I implore the Biden administration to take swift action to secure the border, crack down on human trafficking, and prevent more children from being trafficked and abused.’

Neither Biden nor Harris have scheduled a trip to the southern border, as Republican critics hammer the administration for the uptick in migrants.

Biden has expressed that most of the border crossers are being sent back – with the biggest change being that unaccompanied minors can stay in the U.S., which was also Trump’s policy, but pre-pandemic.

The Washington Post reported that the surge is mostly the standard seasonal increase – most border crossings happen in warmer weather – topped with a group of migrants who had waited out the pandemic in 2020.

‘She doesn’t know the difference between “surge” and “insurgent”‘: AOC is slammed for saying anyone who uses term ‘surge’ to describe the border crisis is invoking ‘militaristic’ language of white supremacists

Congresswoman Alexandria Ocasio-Cortez has been slammed after telling her supporters to stop calling the record number of migrants arriving at the border a ‘surge’, as it places the crisis in a ‘militaristic frame’.

During a lengthy Instagram Live session on Tuesday night, AOC implored people to exercise caution with how they described the border crisis.

‘They wanna say, ‘But what about the surge?” Well, first of all, just gut check, stop. Anyone who’s using the term ‘surge’ around you consciously is trying to invoke a militaristic frame.’

‘And that’s a problem because this is not a surge, these are children and they are not insurgents and we are not being invaded, which by the way is a white supremacist idea-philosophy, the idea that if another is coming in the population that this is an invasion of who we are,’ the congresswoman said.

Critics have labeled the comments ‘peak AOC’, and ridiculed her for not knowing the difference between the word ‘surge’ and ‘insurgent’. 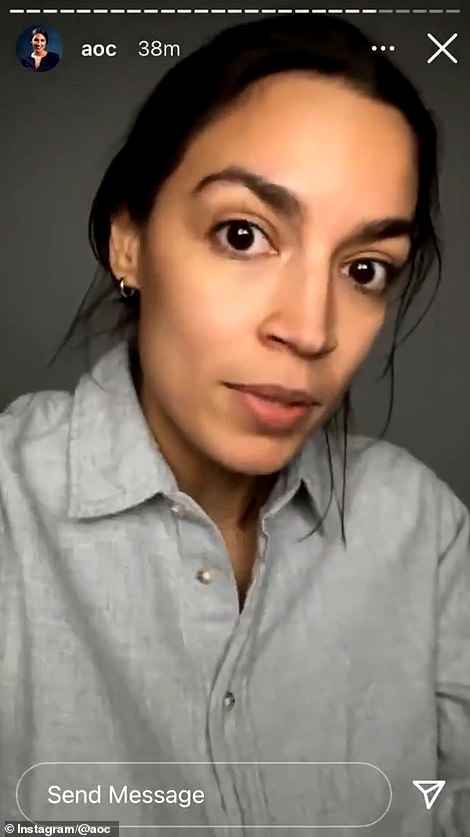 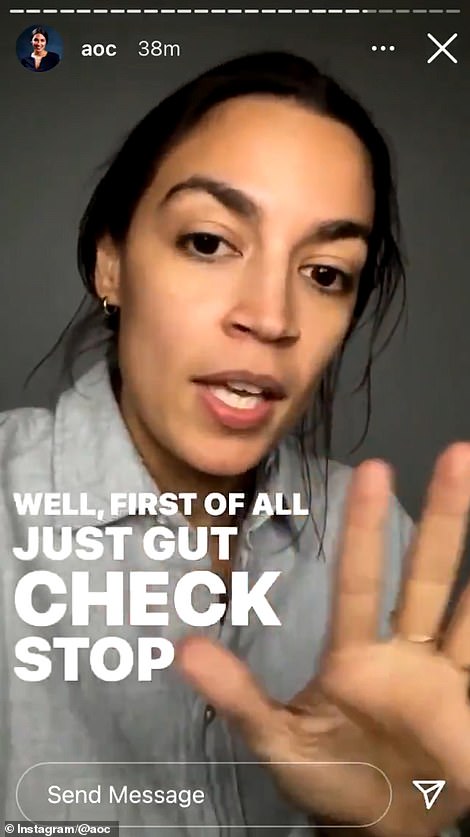 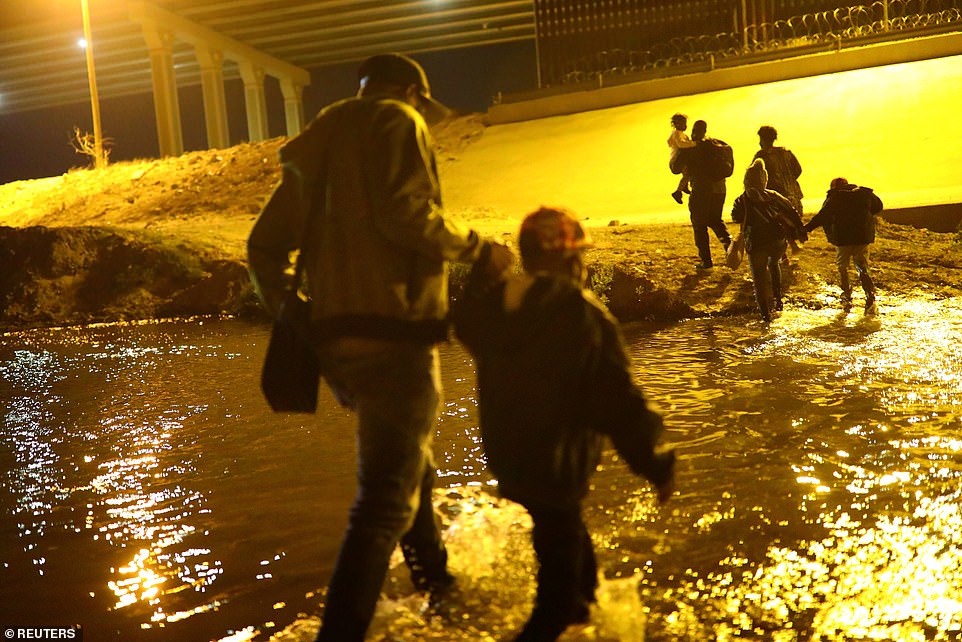 A family of migrants cross the Rio Bravo river to turn themselves in to U.S Border Patrol agents to request for asylum in El Paso, Texas, US, as seen from Ciudad Juarez, Mexico, March 30

Tom Bevan, the co-founder of conservative political news site Real Clear Politics, said: ‘Not knowing the difference between the meaning of ‘surge’ and ‘insurgent’ – and then using it as a talking point about white supremacy – is peak AOC.’

Journalist Tim Pool, who describes himself as a ‘disaffected liberal’ in his Twitter bio, posted: ‘It’s like no matter what happens she has some half-brained complaint that has nothing to do with what’s going. ‘Surge’ is racist? What the f*** do you even do?’

A sudden large increase in something that has previously been steady, or has only increased or developed slowly.

And Fox News contributor Tom Homan said the people who know the situation best, Border Patrol, are calling it a surge.

‘This is a national security crisis. If [Ocasio-Cortez] can’t understand that or accept that, then she shouldn’t be in Congress at all.’

The influx of children is leading to a bottleneck at custody centers and makeshift facilities along the border.

Additionally, there are 11,886 children in the custody of Health and Human Services.

Combining the HHS and CBP figures, the Biden administration has more than 17,500 children in custody.

On Tuesday, President Joe Biden’s administration allowed journalists inside its main border detention facility for migrant children for the first time, after weeks of shutting the media out and releasing their own photos.

The tour on revealed a severely overcrowded tent structure in Donna, Texas, where more than 4,000 migrants, including children and families, are crammed into pods.

The youngest are kept in a large play pen with mats on the floor for sleeping, because the facility is at 1,700% capacity and the dormitories are full.

Border guards say 14 per cent – roughly one in seven – of the migrant children have tested positive for COVID while photos also show detainees being treated for lice, amid fears of an outbreak. 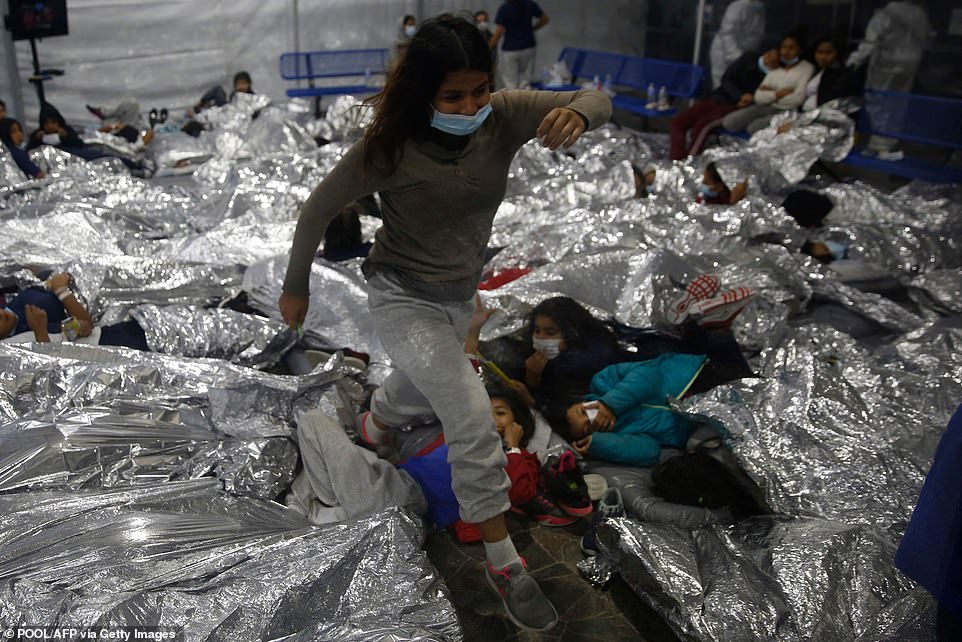 Children are being crammed into the at the shelters like the one above, the Donna Department of Homeland Security, for weeks on end after a huge increase in March in the number of unaccompanied migrants 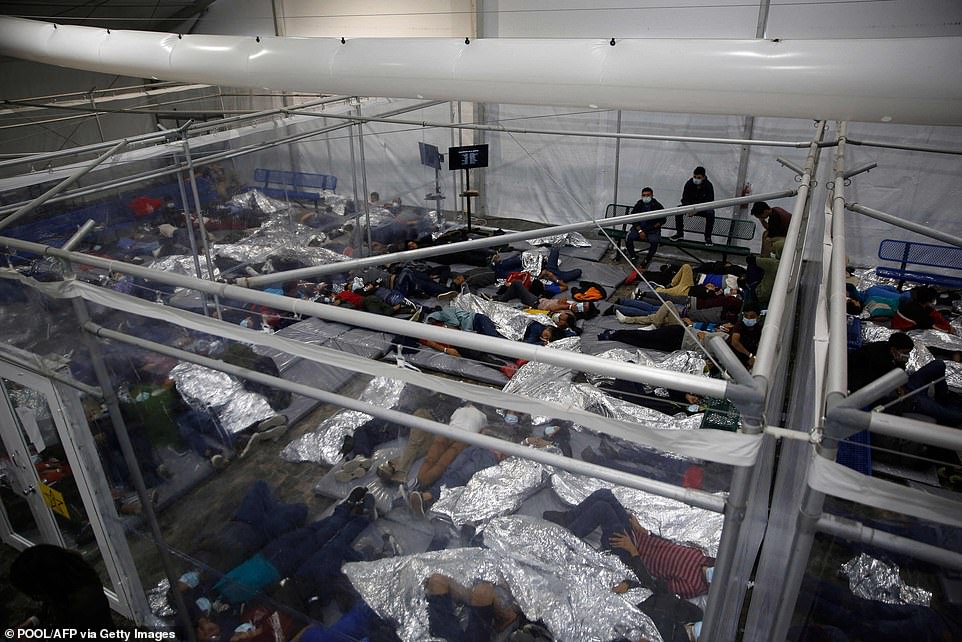 Media were allowed in to see the facilities this week, with shocking scenes like the one above at the Donna Department of Homeland Security holding facility (file photo)

Two thousand children have already overstayed their 72-hour legal limit and at least 39 have been stuck in the cramped quarters for two weeks.

U.S. Customs and Border Protection allowed two journalists from The Associated Press and a crew from CBS to tour the facility in the Rio Grande Valley.

Republicans argue Biden’s decision to roll back many of Donald Trump’s stricter border policies has led to the recent migrant surge.

Cruz posted photos of children being held in crowded conditions – many sleeping on the floor – in one of the shelter.

AOC and several other progressive Democratic congresswoman lhan Omar of Minnesota, Ayanna Pressley of Massachusetts, and Rashida Tlaib of Michigan, refer to themselves as The Squad.

They were joined by Jamaal Bowman of New York and Cori Bush of Missouri after the 2020 election.