By Tim Stickings For Dailymail.com

A woman assaulted her girlfriend in an argument over chicken nuggets before biting a sheriff’s deputy on her way to jail, according to an arrest warrant.

Lillian Barnett faces a series of charges after the alleged March 18 incident including domestic assault and aggravated assault on an officer, WKRN reports.

The 23-year-old told Tennessee detectives that the row with her girlfriend which led to the alleged assault had ‘started over chicken nuggets’, without explaining further.

Bedford County deputies took her into a patrol car but she would not go quietly and bit a deputy on the right arm as she was led to jail, it is alleged. 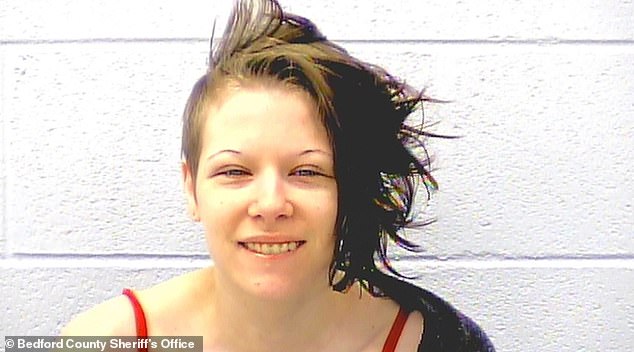 Lillian Barnett (pictured) allegedly assaulted her girlfriend in an argument over chicken nuggets before biting a sheriff’s deputy on her way to jail, according to an arrest warrant

Barnett is also accused of screaming in the patrol car and trying to smash one of its windows by kicking it and bashing against it with her head.

The biting incident is said to have taken place while she was taken to a cell at the Bedford County jail where she was booked last week.

The report of her arrest also notes that Barnett had previously said she had hepatitis C, which spreads through blood-to-blood contact.

The girlfriend and deputy have not been identified. Barnett is due for an initial court appearance on March 31.