Aboriginal elder wins compensation from neighbour who launched into a ‘vile, racist and homophobic’ rant in response to a simple friendly greeting

An Indigenous elder and artist subjected to ‘vile, racist and homophobic’ abuse after greeting a friend’s neighbour says he pressed a claim of unlawful discrimination to set an example for his grandkids.

William ‘Billy’ Lamb, 64, was standing outside his friend’s home in Taree, on the New South Wales mid-north coast, when his ‘how ya goin’, brother’ greeting was met with a torrent of hate speech from Wayne Campbell in April 2020.

Mr Campbell did not challenge the unlawful racial vilification case in the NSW Civil and Administrative Tribunal.

The tribunal ordered the neighbour to publicly acknowledge the finding and pay damages to the Wiradjuri elder also known as Uncle Billy. 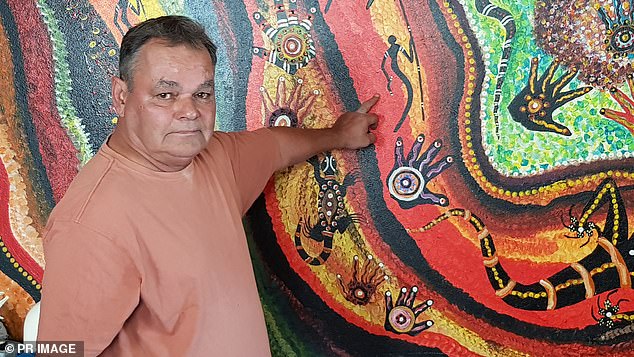 An Indigenous elder and artist (pictured, William ‘Billy’ Lamb) subjected to ‘vile, racist and homophobic’ abuse after greeting a friend’s neighbour says he pressed a claim of unlawful discrimination to set an example for his grandkids

‘Mr Campbell had never met Mr Lamb before that day and he would have known almost nothing about him except the colour of his skin,’ it said.

‘The words used by Mr Campbell were vile, racist and homophobic. Mr Lamb did nothing to invite or deserve the tirade visited upon him.’

Responding to Mr Lamb’s greeting, the man formerly of Forster said ‘None of your business, black n***** c***,’ before making a series of racist remarks and also calling Mr Lamb a ‘f**king black poof’.

When the former amateur boxer invited Mr Campbell to come into the street and repeat the abuse, Mr Campbell refused and later threatened to pull his gun on Mr Lamb and his friend.

‘It was embarrassing,’ Mr Lamb said.

‘I let him rave on and rave on. You’re on the main road… all the kids are going past going to school.’

He was willing to accept an apology over the phone, but when Mr Campbell ‘swore and carried on’, Mr Lamb took it to NCAT.

‘You gotta hit them hard in the pocket,’ he said.

‘I’m setting an example. I’ve got grandkids and I want them to be proud of Pop. And for every other kid in Taree, I don’t want them to grow up in this bulls***.

William ‘Billy’ Lamb, 64, was standing outside his friend’s home in Taree, on the New South Wales mid-north coast (pictured), when his ‘How ya goin’, brother’ was met with a torrent of hate speech from Wayne Campbell in April 2020

‘It’s wrong what we’ve been putting up with.’

NCAT said Mr Campbell’s abuse was easily capable of inciting others to join in.

‘What distinguished Mr Campbell’s conduct from mere personal abuse was that he made a public scene,’ tribunal members Michael Easton and Maree Murray said.

Mr Campbell was ordered to pay Mr Lamb $2,250 in damages and take out an ad in the local newspaper acknowledging the decision, including that ‘my statements were vile, racist and homophobic’.

If he does not do so within two months, he will have to pay a further $2,250 to the Trangie-raised man.

‘The statement will also be educative, for both the Aboriginal and non-Aboriginal communities, and may act as deterrence,’ the tribunal said.