The Sydney Swans will take ‘working from home’ to a new level on Saturday as coach John Longmire’s three assistants will log in via video link to the MCG coaches’ box as they isolate at home following a Covid scare.

Don Pyke, Jarrad McVeigh and Dean Cox will all log in from Sydney after they remained behind when the Swans flew out early for Saturday night’s game against ladder-leading Melbourne.

All three had gone to the same cafe near the clubrooms which were visited earlier this week by a man who later tested positive for Covid-19, and although the trio had since returned negative results, it was decided they should not travel to Melbourne.

That decision will leave head coach Longmire and the Swans at the mercy of the video link which, if it fails, could leave him coaching solo in scenes not witnessed at AFL level for decades. 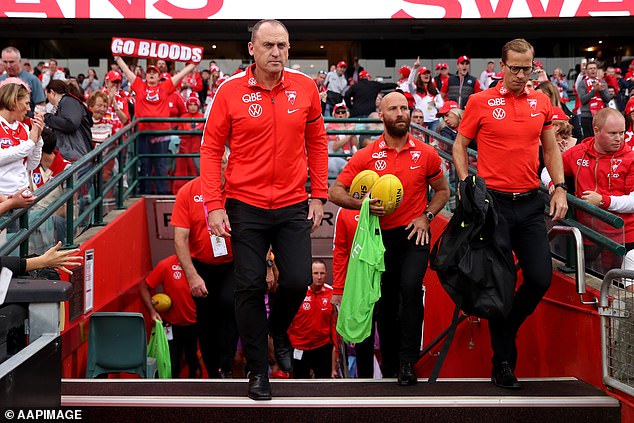 Sydney head coach John Longmire’s three assistants will be forced to work by videolink for Saturday night’s game against Melbourne at the MCG. Among the missing are former club captain Jarrad McVeigh (centre with beard holding footballs) and ex-Adelaide head coach Don Pyke (lower on stairs between Longmire and McVeigh).

‘We just need to make sure the involvement the remote coaches have, their interaction with the coaches at the MCG works – and be pretty clear early days if it doesn’t then move to another solution,’ Swans chief executive Tom Harley said.

‘There’s no playbook for this … as far as I know this hasn’t been attempted before.’

While a good video link should allow the assistants to provide Longmire with advice and feedback through the game as usual, their absence from the rooms pre-game and at half-time will rob them of the chance to fully instruct and cajole the players.

The Swans flew out to Melbourne on Thursday so as to avoid being trapped in New South Wales if the Covid outbreak worsened and borders had to be closed.

However the NSW government reported no new cases of locally-transmitted virus in the 24 hours to Friday morning. 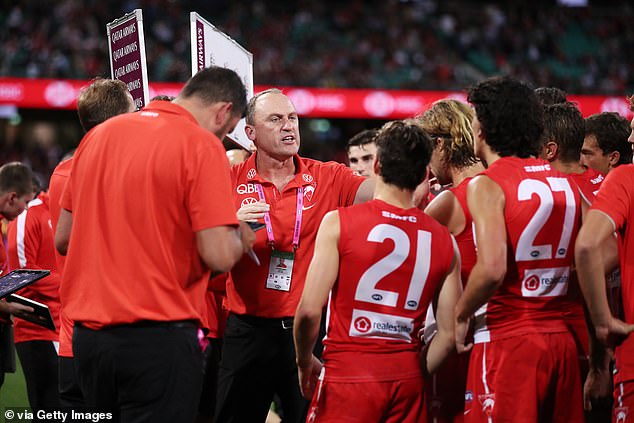 Longmire will be forced into old-school solo coaching before the game and during breaks without his line coaches to give more personal instruction to players. Among the missing assistant coaches is ex-West Coast ruck great Dean Cox (back to camera next to Longmire).

Harley admitted the absence of the assistant coaches, and the disruption to routine put the Swans at a significant disadvantage as they attempt to knock off the unbeaten Demons.

‘It is a significant disruption to the program and I don’t think anyone would think any less of us for putting it on the table,’ Harley said, adding that he had spoken to league CEO Gillon McLachlan about the disadvantage.

‘The rapport the players have with assistants, in a lot of cases, is the most connected relationship.’