Stephen Schork is the Founder and Editor of The Schork Report, a daily subscription newsletter on the energy cash and financial markets

Gas prices are skyrocketing around the U.S. and there’s no sign of relief in sight.

If the average cost of a gallon of gas continues to climb, as I predict that it will, not only will hard-pressed Americans feel an enormous additional financial burden but the entire economy will face an increased risk of recession.

It didn’t need to be this way.

AAA reported Sunday that the national average for a gallon of gas hit $4.009 — the highest since 2008.

Last week, prices at the pump jumped at the fastest pace since Hurricane Katrina knocked out oil producers in the Gulf of Mexico in 2005.

In the futures market, Brent crude oil on the Intercontinental Exchange (ICE) peaked late last week at a ten-year high of $119.84 per barrel, the equivalent of $4.013 per gallon for consumers.

Brent crude oil briefly spiked even above $139 a barrel on Sunday before settling back around $122. 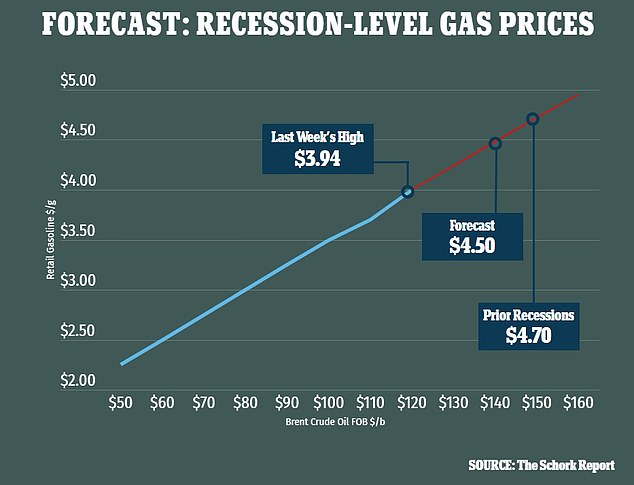 Prior to the 2008 recession a barrel of crude oil hit $150. We are well on our way to reaching and potentially exceeding that crisis mark endangering the entire economy. (The chart above shows Stephen Schork’s projection for retail gas prices in the summer of 2022, which approach levels that have previously proceeded recessions)

These levels are not even the top if crude oil prices remain at current levels.

As the warm weather arrives, travel demand for gasoline will rise sharply.

At the same time, refiners will be required to supply summer-grade gasoline to the market, a blend of gasoline which is more expensive to produce.

These additional factors will add, on average, another $0.302 per gallon over the summer.

Taken all together, gas prices are about to smash the previous record from July 2008 of $4.062 per gallon.

I forecast that average prices could top $4.500 per gallon by peak summer driving season.

Of course, this is contingent upon crude oil prices holding at current levels.

For every one dollar increase in crude oil from here, will translate to a 2.4 cent increase for drivers at the pump.

Therein lies the concern about economic growth as more and more dollars are spent on gasoline, rather than on other consumer goods.

Consumer spending accounts for 70% of the U.S. economy.

At some point, demand for gasoline will hit an inflection point. Consumer will face hard decisions like choosing between groceries or gas.

This typically happens at the onset of recession — choking consumer spending chokes the U.S. economy.

Consider that every recession, beginning with the economic downturn, which started in the aftermath of the 1974 Arab oil embargo through the 2008 Great Recession, occurred on the heels of a meteoric rise in the cost per barrel of crude oil.

Prior to the 2008 recession a barrel of crude oil hit $150. We are well on our way to reaching and potentially exceeding that crisis mark endangering the entire economy.

​Second, how we got here:

One of the reasons that American’s find themselves at the mercy of the oil markets is that we are relying more and more on foreign producers.

War in Ukraine is now driving prices higher, as production is reduced and buyers avoid purchasing Russian products. Fears of a U.S./European boycott of Russian energy is another upward pressure on prices.

But there’s nothing to be done about it in the short term.

In the 2020 presidential debate, Biden answered ‘yes’ to the question of whether he would close down the oil industry. The world is now reaping the consequences of his energy policy.

There are numerous examples in Biden’s energy policy that have driven energy costs sky high. Perhaps his greatest sin is his unending reluctance to embrace domestic energy production. 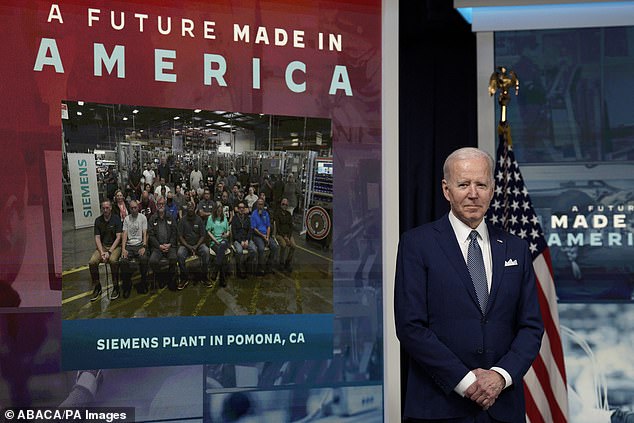 As a result of the Biden White House’s declared war on the U.S. oil and gas industry, Putin’s economic fortunes have turned around over the last two years. (Above) President Biden waits to deliver remarks on Made in America Commitments at the White House in Washington on March 4, 2022

Consider that from 2016 until Biden’s inauguration, the U.S. was a net exporter in five out of eight weeks, with the U.S. exporting 1.9 barrels for every imported barrel.

In Biden’s first 57 weeks in office that has changed. The U.S. has been a net importer of oil in four out of every five weeks, with the U.S. importing 6.5 barrels for every one barrel exported.

As a result of the Biden White House’s declared war on the U.S. oil and gas industry, Putin’s economic fortunes have turned around over the last two years.

Dependence on Russian oil skyrocketed over the past year.

Total imports of Russian crude oil and petroleum products jumped 24% in 2021 to a record 245 million barrels. This massive infusion of petrodollars into Putin’s war chest has helped to fund his adventures in Ukraine.

Our experiment with a zero-sum green agenda is a disaster.

Even the Germans now know going fully green is untenable; the country recently admitted that a strategy that eschews investment in fossil fuels is unsound and in the case of Russia, dangerous as well.

Third, Biden has no good solution for this crisis:

In the State of the Union address, Biden announced that the U.S. will add more supply to the global energy market by releasing oil from the nation’s Strategic Petroleum Reserve to, ‘help blunt gas prices here at home.’

As I predicted in an article for DailyMail.com in November, when Biden released 50 million barrels from the SPR, the policy is meaningless political posturing.

The President’s plan to combat runaway prices to, ‘cut energy costs for families an average of $500 a year…’ also rolls in another ridiculous scheme to rein in prices by — wait for it — ‘combatting climate change.’

Nowhere in the President’s one-hour long, near 7,000-word speech did he mention increasing domestic oil and gas production.

As Benjamin Franklin, Albert Einstein, et al. have been quoted the definition of insanity is doing the same over and over and expecting different results.

By this rubric, Biden’s plan to tackle rising energy costs is insane. 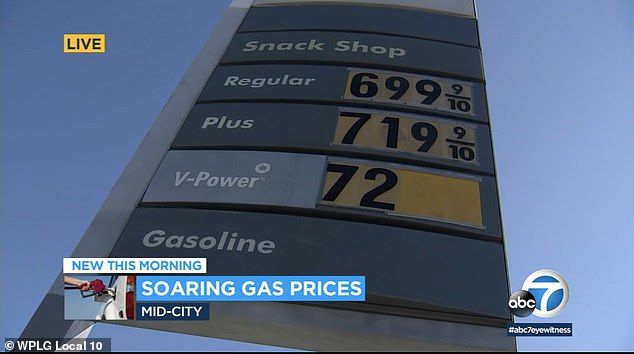 At some point, demand for gasoline will hit an inflection point. Consumer will face hard decisions like choosing between groceries or gas. (Above) One Los Angeles gas station near Beverly Hills was advertising regular unleaded gas for $6.99 on Sunday, March 6

If Biden was serious about lowering energy costs, then in his SOTUS he would have given his plan to ramp up domestic crude oil production from its current rate of 11.5 million barrels a day, back to its pre-Covid rate of 13.1 million barrels per day.

Instead, the President regurgitated his lame platitudes to renewables.

Biden is drowning, and a drowning man will clutch at a straw.

One of those straws appears to be coming in the form of Venezuela.

The New York Times reported that U.S. officials traveled to Venezuela this past weekend.

Now the Biden administration is attempting to crawl back into the dictator’s good graces, because Venezuela is an oil producing nation.

Senator Marco Rubio may have said it best when he tweeted:

‘Joe Biden using #Russia as an excuse to do the deal they always wanted to do anyway with the #MaduroRegime… Rather than produce more American oil he wants to replace the oil we buy from one murderous dictator with oil from another murderous dictator.’

A quote often attributed to Winston Churchill stands true, ‘You can always count on the Americans to do the right thing after they have tried everything else.’

Biden’s SOTUS was an opportunity to change course from his failed energy policy to one that embraces domestic production. Instead, he gave us his boilerplate pap on renewables.

By this metric, high energy costs are here to stay. Eventually we will come around and make the right decision on investment in fossil fuels. Putin is now fast tracking this inevitability.

Let’s hope American’s right answer is not too late.