Vladmir Putin’s invasion of Ukraine plunged to new depths of barbarism yesterday as his troops flouted a promised ceasefire and shelled fleeing refugees.

Some 200,000 civilians were set to leave the port city of Mariupol and 15,000 from Volnovakha in eastern Ukraine at 7am yesterday (UK time) as part of a temporary ceasefire deal overseen by the Red Cross.

But at 9.45am the evacuation was thrown into chaos as Russia resumed its blitz against Volnovakha, while attacks were also launched on the evacuation route leading out of Mariupol, according to Ukrainian authorities. 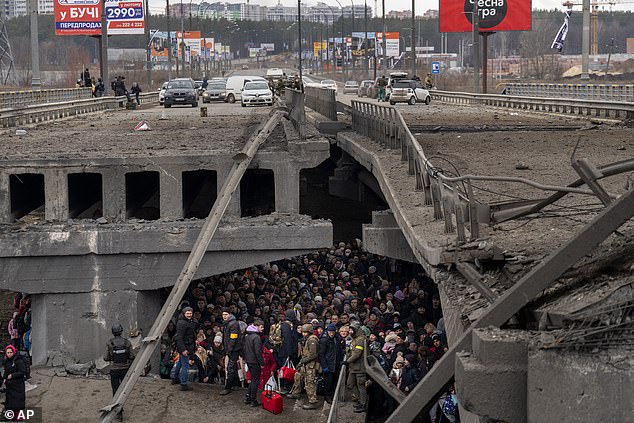 ‘I’m right now in Mariupol, I’m on the street, I can hear shelling every three to five minutes,’ said Alexander, a 44-year-old engineer. ‘I can see cars of people who tried to flee and they are coming back. It is chaos.’

‘Our civilians are ready to escape but they cannot escape under shelling.’

Just 400 refugees managed to flee Volnovakha before the ceasefire was shattered. It is unclear how many – if any – families escaped Mariupol.

British military intelligence believe the proposed ceasefire was actually a cynical attempt by Moscow to reset its forces and prepare for a new military onslaught.

‘Russia’s proposed ceasefire in Mariupol was likely an attempt to deflect international condemnation while resetting its forces for renewed offensive activity,’ an intelligence update by the Ministry of Defence said.

Tory MP Tobias Ellwood, chairman of the Commons’ Defence Select Committee, last night urged the West to do much more to prevent further ceasefire breaches and atrocities. ‘Putin will not stop until he is stopped,’ he said.

‘As long as he goes unpunished, the genocide will continue. He has established there is zero appetite in the West to directly assist Ukraine, even when war crimes are committed, let alone when a ceasefire is breached.’ 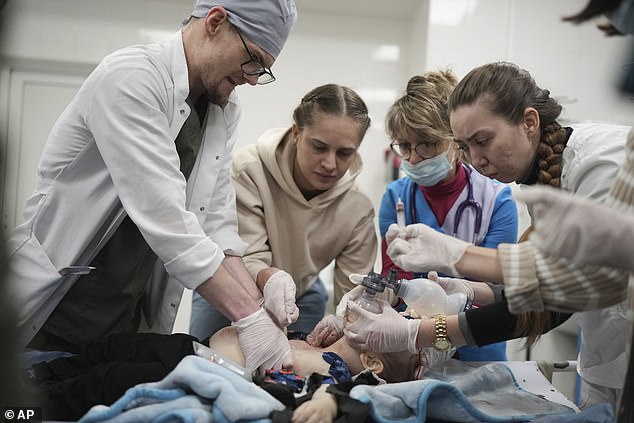 Medical workers try to save the life of Marina Yatsko’s 18 month-old son Kirill, who was fatally wounded by shelling, at a hospital in Mariupol 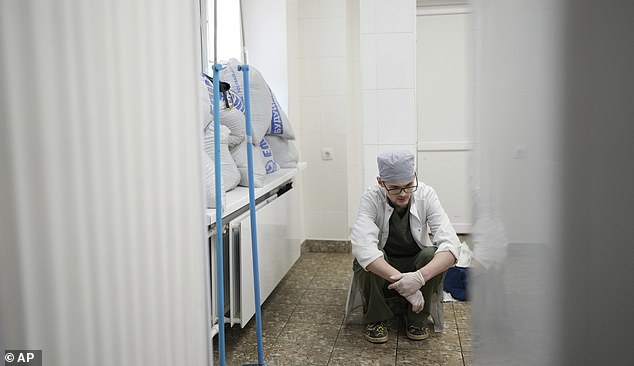 Multiple cities were hit yesterday, including Bila Tserkva, south of the capital Kyiv, and Kharkiv 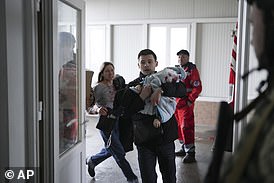 They are pictures that will horrify the world – and skewer the lie that Vladimir Putin’s forces are not killing innocent civilians.

Many readers will be shocked, but we are publishing them so no one is left in any doubt about the indiscriminate killing in Ukraine. The images show a distraught Marina Yatsko, covered in blood, running into a hospital in besieged Mariupol on Friday.

Ms Yatsko’s boyfriend Fedor is carrying her 18-month-old son Kirill, wrapped in a blue blanket. The toddler was hit by shrapnel in a Russian artillery strike. Six doctors fought to save Kirill but were unable to resuscitate him. He is one of dozens of children to die since Putin’s forces invaded.

Another image shows Ms Yatsko embracing Kirill’s body as he lies on a bloodied stretcher. An exhausted doctor sits on the floor after the unsuccessful attempt to save the youngster’s life.

Former RAF Air Marshal Edward Stringer said: ‘Even if this is a conspiracy or an accident, breaking the ceasefire like this just shows how untrustworthy Putin is. If this is deliberate, then it goes to show how heinous the Russian troops are.’

Capturing the south-eastern port of Mariupol represents a huge prize for Putin because it will deliver a major blow to Ukraine’s maritime links and connect his troops in eastern Ukraine with those in Crimea, which Russia annexed in 2014.

Russian forces have launched ruthless artillery attacks and imposed a blockade, which has seen power and water shut off to the city’s 450,000 residents.

An unnamed aid worker for the medical charity Medecins Sans Frontieres (MSF) described the horrific conditions endured by those trapped in Mariupol.

‘This night the shelling was harder and closer. We collected snow and rain water yesterday to have some utility water. We tried to get free water today but the queue was huge. Still no power, water, heating and mobile connection. Pharmacies are out of medicine.’

With its invasion stalled after ten days of bloody fighting, Moscow is using the indiscriminate shelling of civilians to sow panic.

Multiple cities were hit yesterday, including Bila Tserkva, south of the capital Kyiv, and Kharkiv, where residents spent another night in underground shelters and metro stations.

There was also fierce fighting in Bucha, north-west of Kyiv, with reports of civilian casualties.

In the nearby town of Irpin, hundreds of desperate civilians were yesterday pictured sheltering underneath a destroyed bridge that connects the town to Kyiv. The bridge was blown up last week by Ukrainian forces to stall the Russian advance.

While Ukrainian troops helped wheelchair-bound pensioners and mothers with prams cross a few wooden planks tossed over the river, families crammed together under the bridge’s shattered concrete slabs and waited for their turn to cross.

Those fleeing Bucha and Irpin said their determination to stay had been shattered when Russian planes began bombing residential areas.

‘It began two days ago. It wasn’t as heavy before, but two days ago it started getting really heavy.’

Galina Vasylchenko, who was walking with her 30-year-old daughter towards the makeshift bridge, said: ‘We were waiting it out. But yesterday, when a plane flew by and dropped something on us, we simply had to run.’

The Red Cross last night said it remained in dialogue about the safe passage of civilians from cities in Ukraine. A spokesman added: ‘The scenes in Mariupol and in other cities today are heartbreaking.’