The billionaire businessman and former longtime boyfriend of supermodel Naomi Campbell spoke out after a small group of protesters gathered outside his soon-to-open posh Midtown Manhattan hotel – Aman New York – over the weekend.

‘I denounce the aggression of Russia on Ukraine and fervently wish for peace,’ Doronin said on Monday.

‘I was born in the USSR, a union which no longer exists, which comprised both Russia and Ukraine. I left in 1986 before its dissolution and have therefore never been a Russian national. 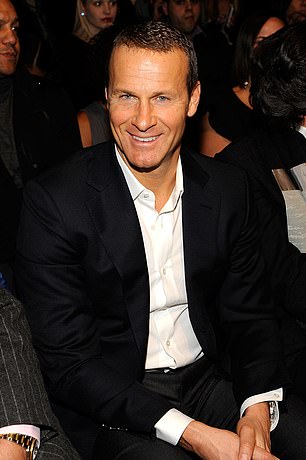 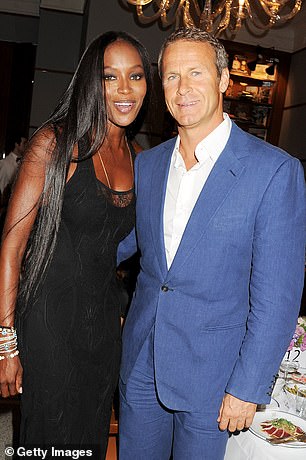 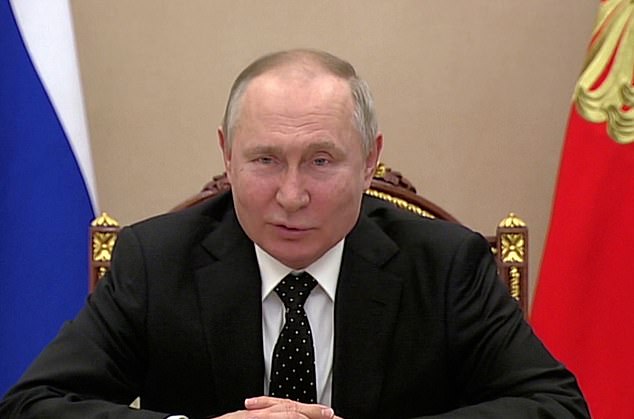 ‘As an international businessman with teams situated across all corners of the globe,’ Doronin continued, ‘I have always embraced a culture of inclusion and peace.

Doronin, 59, is owner and chairman of Aman Resorts, which is planning to open a luxury hotel and ‘urban sanctuary’ in the former Museum of Modern Art in the spring, offering $100,000 memberships to a private club featuring a three-story spa with a 25-meter indoor pool, sauna and steam rooms, and a terrace with cabana, day bed and fireplace.

Peter Zinkovetsky, a New York real estate attorney from Ukraine who has family holed up in a bomb shelter in Kharkiv, helped organize Saturday’s rally, which brought a few dozen people from a larger protest in Times Square to picket the property near the corner of Fifth Avenue and 57th Street.

‘This is as prime real estate as you can get,’ Zinkovetsky told DailyMail.com hours after the protest.

‘If an owner of such a large corporation cannot answer such a simple question, that speaks for itself.’ 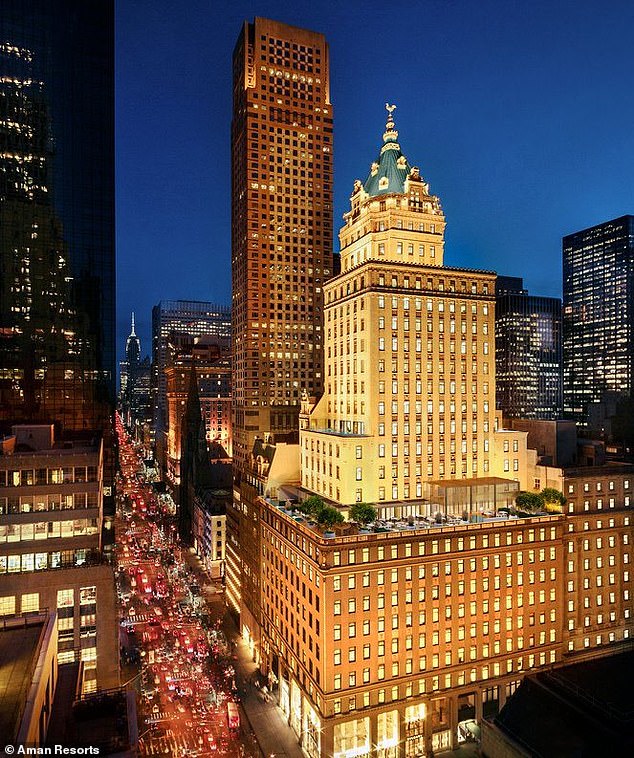 Doronin, 59, is owner and chairman of Aman Resorts, whose newest hotel Aman New York is set to open this spring in Manhattan’s iconic Crown Building 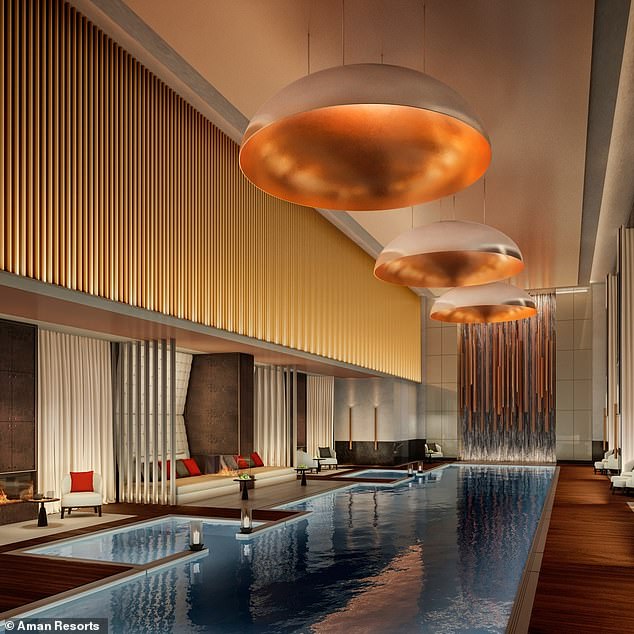 The resort is offering $100,000 memberships to a private club featuring a three-story spa with a 25-meter indoor pool, sauna and steam rooms, and a terrace with cabana, day bed and fireplace 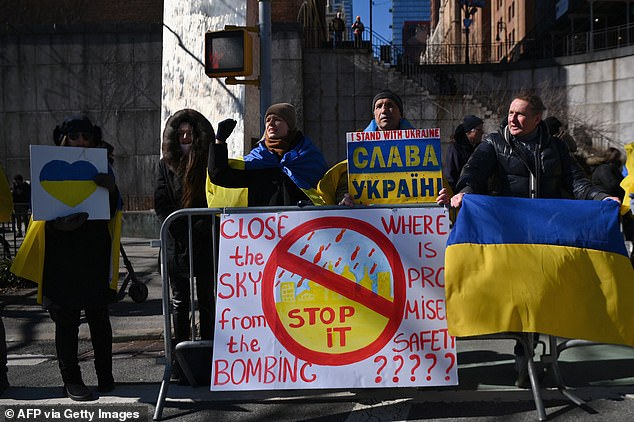 Doronin spoke out after protesters from a larger protest in Times Square gathered to picket the property near the corner of Fifth Avenue and 57th Street over the weekend. Pictured: Demonstrators in New York City

Doronin is also the CEO and chairman of US-based international development company, OKO Group, which has locations in Miami and Manhattan.

The company currently has several development projects in the works including Aman New York, and two residential and one commercial site in Miami.

Protesters had been planning to gather outside one of Doronin’s properties in Miami on Monday, before he issued a statement opposing the war.

‘That was because of the protest,’ Zinkovetsky insisted, though Doronin did not acknowledge his comments were connected.

‘He had no comment before that. That was my point exactly, that once you push with the Russian oligarchs, with the Russian companies, they will have to go on the record, just like Doronin did. All Ukrainian people thank him for now taking a stand.’

Michael Mudrik, a real estate agent in Miami who is from western Ukraine, was helping plan today’s protest. 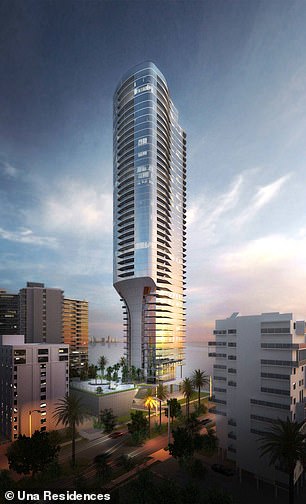 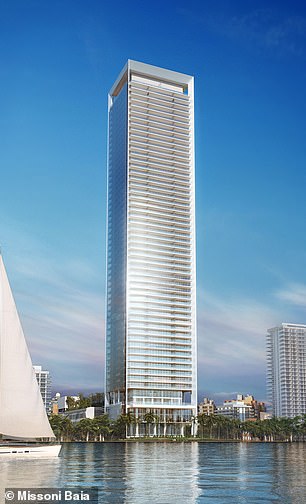 Doronin is also the CEO and chairman of US-based international development company OKO Group, which is also in the process of developing  commercial and residential sites in Miami. Pictured: Una Residences (left) a condo tower overlooking Biscayne Bay and Missoni Baja (right) 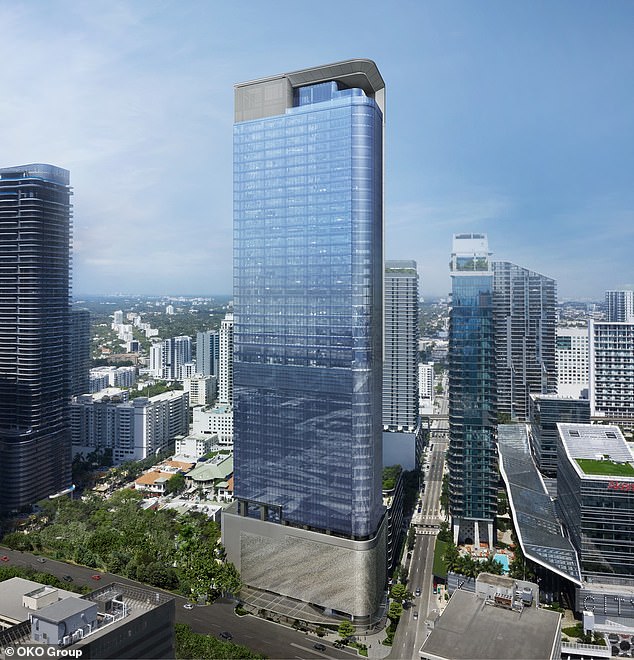 Doronin is set to open 830 Brickell, Miami – a premium office space in the heart of Miami’s financial center 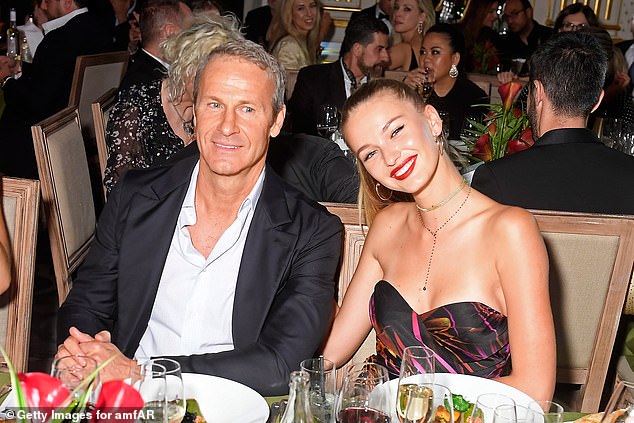 ‘We’re thankful he did the right thing,’ he told DailyMail.com.

The organizers are considering new targets.

‘We don’t want to hurt Russians doing business in the United States. That’s not what this is about,’ Zinkovetsky said. ‘This is about the Russian oligarchs who support this war and the Putin machine.

‘We just want the oligarchs to come out and take a stand. If they support Putin, this war, the invasion, then there is no reason why they should be allowed to do business in the United States or anywhere else in the civilized world.’

Doronin, in his release, stated he was born in the former USSR and left in 1986 and has therefore never been a Russian national.

‘As an international businessman with teams situated across all corners of the globe, I have always embraced a culture of inclusion and peace,’ he continued.

‘In doing so, together we not only celebrate many cultures, but we do so with purpose and a unified voice, which has harmony, goodwill, and wellbeing at its heart.’

Doronin’s comments came after two Russian billionaires became the first powerful oligarchs to call for an end to the conflict.

Mikhail Fridman, who was born in western Ukraine, and Oleg Deripaska have condemned Putin’s invasion by calling for peace talks ‘as fast as possible’ between the two countries in an unusual intervention from Russia’s leading business elite. 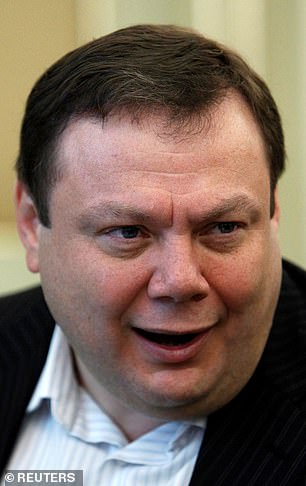 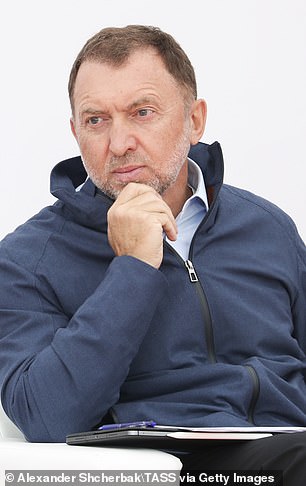 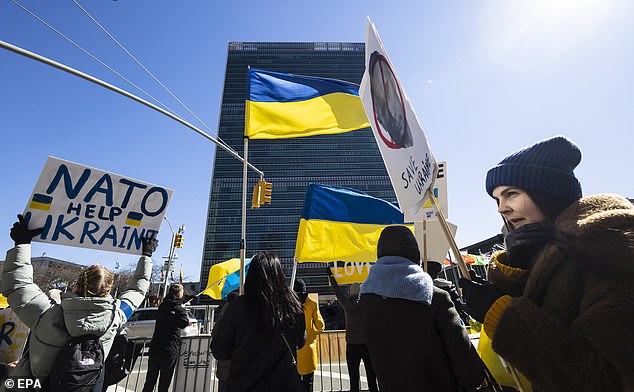 Fridman, who is a co-founder of Russia’s largest private bank Alfa and controls private equity firm LetterOne, called for the ‘bloodshed’ to end.

The 57-year-old, who was ranked as the 128th richest person in the world by Forbes in 2021, also said the war was a ‘tragedy’ for both countries’ people and told LetterOne staff in a letter that the conflict was driving a wedge between the two eastern Slav peoples of Russia and Ukraine, who have been brothers for centuries.

He wrote: ‘I was born in Western Ukraine and lived there until I was 17. My parents are Ukrainian citizens and live in Lviv, my favorite city.

‘But I have also spent much of my life as a citizen of Russia, building and growing businesses.

‘I am deeply attached to the Ukrainian and Russian peoples and see the current conflict as a tragedy for them both.’

Meanwhile billionaire Deripaska – who is the founder of Russian aluminium giant Rusal in which he still owns a stake via his shares in its parent company En+ Group – used a post on Telegram to calle for peace talks to begin ‘as fast as possible’.

Russia’s so-called oligarchs, who once exercised significant influence over President Boris Yeltsin in the 1990s, are facing economic chaos after the West imposed severe sanctions on Russia over Putin’s invasion of Ukraine.