Russian strongman Vladimir Putin has released ‘tough guy’ images as he launches a terrifying new campaign to silence critics of his authoritarian regime – six of whom live in Britain.

An anonymous Russian intelligence officer who warned Salisbury novichok victim Sergei Skripal was being targeted by the Kremlin has spoken out to warn dissidents they are on the ‘kill list’.

The six anti-Putin opponents who are living in Britain include businessman Bill Browder and former MI6 officer Christopher Steele, whose dodgy Trump dossier made him a household name.

Russia’s relations with Western governments are at their lowest point since the end of the Cold War, marred by allegations of election interference and sweeping cyberattacks.

Prime Minister Boris Johnson last week described Moscow as an ‘active threat’ to British and European security, and vowed to raise the cap on the number of nuclear weapons in response.

US President Joe Biden refused to apologise after calling the Russian leader a ‘killer’ amid an escalating war of words between the two countries. President Putin snapped back by wishing his American counterpart ‘good health’ and recalling the Russian Ambassador from the United States.

In another provocative move, the Russian President appeared on stage Thursday during a concert marking the seventh anniversary of Crimea annexation, despite strong condemnation of the ‘occupation’ by the G7.

President Putin has now released new photographs of himself wearing sheep skin to go on manoeuvres in Siberia as he drives an all-terrain vehicle and crossing a shaky suspension footbridge over a frozen river.

Then he joined defence minister Sergey Shoigu, a native of the mountainous Tuva region of Siberia, for a picnic in the wilderness, with empty vodka glasses on the table, and animal skins to warm the seats. 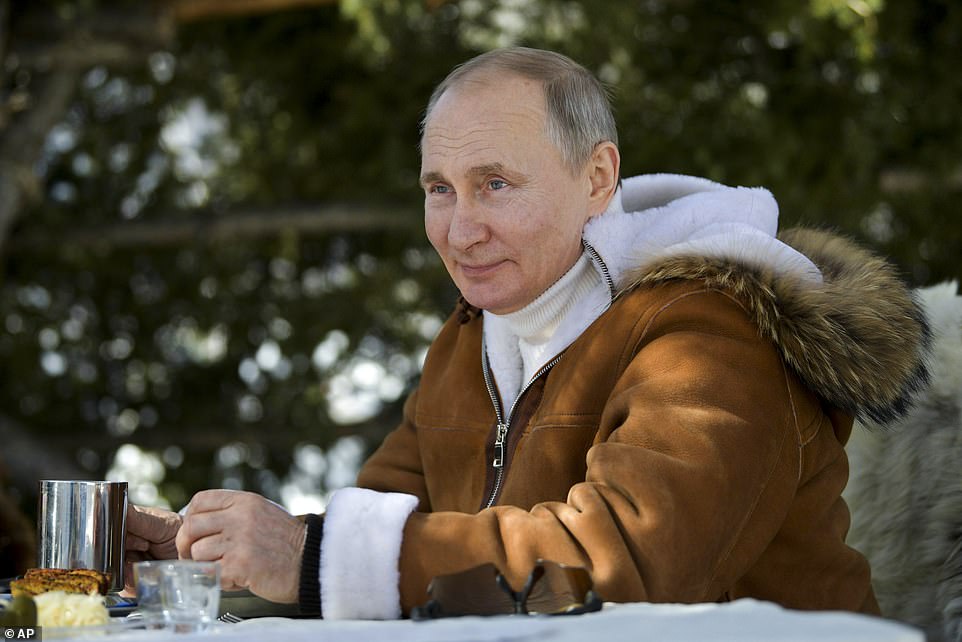 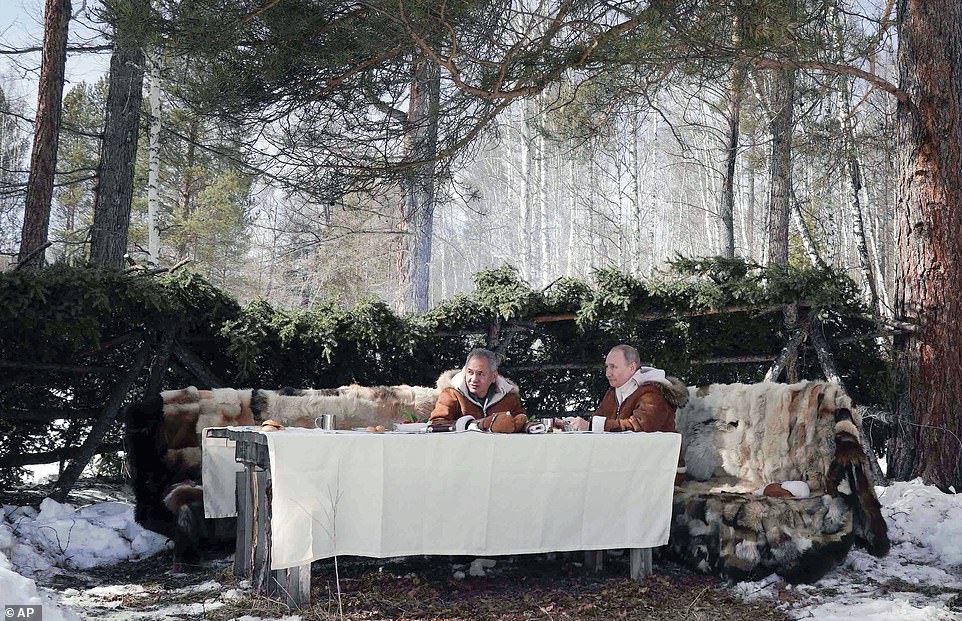 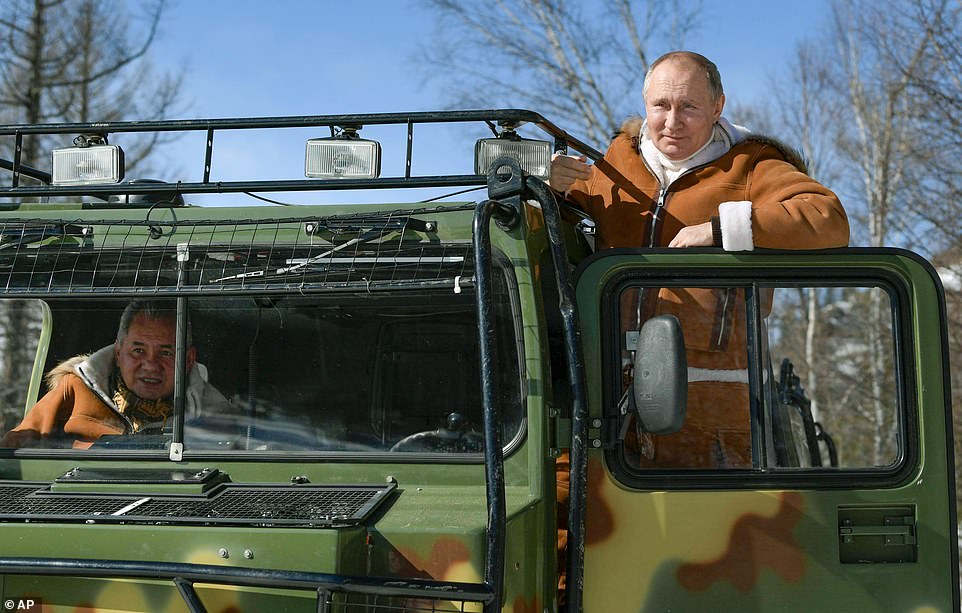 Then he joined defence minister Sergey Shoigu – a native of the mountainous Tuva region of Siberia – for a picnic in the wilderness, with empty vodka glasses on the table, and animal skins to warm the seats 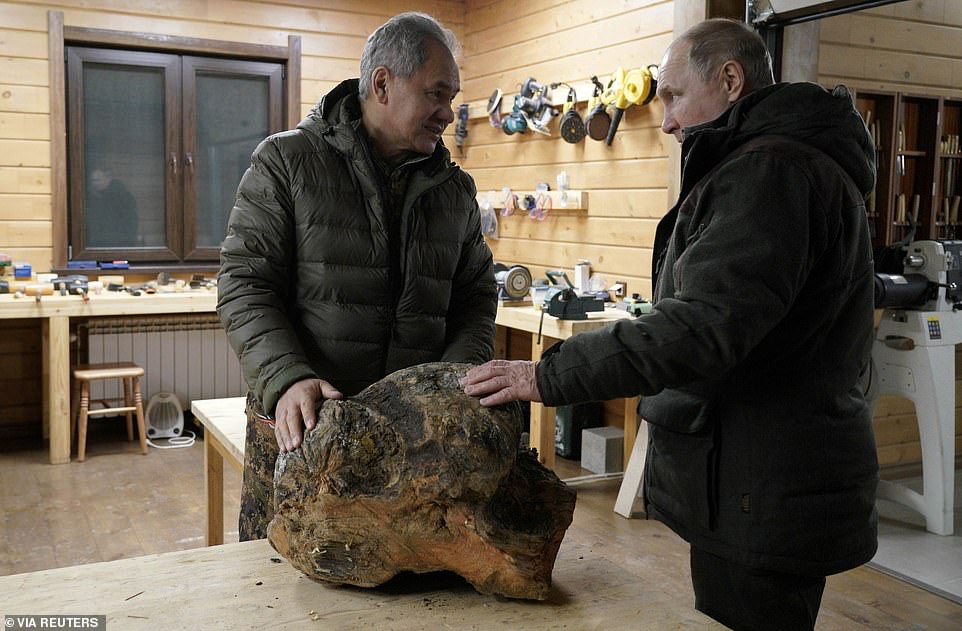 Russia’s ambassador to Britain has accused the UK government of breaking its international treaty commitments with a plan to increase the country’s nuclear arsenal and said the political relationship between Moscow and London is ‘nearly dead’.

In a foreign and defence policy review published on Tuesday and endorsed by Prime Minister Boris Johnson, Britain said it needed to increase its nuclear arsenal in the face of evolving global security threats.

Britain said it would raise the upper limit on its nuclear warhead stock to 260 from 180. The same report also classified Russia as ‘the most acute threat to our security’ in the Euro-Atlantic region.

The Kremlin said at the time that it regretted the British nuclear decision, which it suggested would harm international stability, while the Russian foreign ministry described the move as a serious blow to international arms control.

Andrei Kelin, Russia’s ambassador to Britain, went further in an interview due to be broadcast on the London-based LBC radio station on Sunday, saying the plan looked illegal.

‘You are increasing the number of warheads by 40 per cent. This is a violation of the treaty of non-proliferation and many, many other agreements that are saying only a decline or a reduction in the number of nukes,’ Kelin told LBC, according to a partial transcript on the radio station’s website.

The Treaty on the Non-Proliferation of Nuclear Weapons, which Britain has ratified, came into force in 1970. The UK government has said its plans do not violate the pact.

Russian news agencies cited Kelin as saying that political relations between London and Moscow, which have become strained from events from Russia’s jailing of opposition politician Alexei Navalny to the poisoning in 2018 of a Russian double agent and his daughter, were ‘nearly dead’.

They cited Kelin as saying that only cultural and economic ties remained, while LBC cited him as saying that the last time he had spoken to British foreign minister Dominic Raab was in December 2019.

The Russian President routinely appears on state television participating in various outdoor pursuits to project the image of a healthy and robust leader capable of leading the country for many years to come.

His bare-chested exploits, which infamously included horse-riding, are thought to have conjured for many Russians an image of the strongman as an in-shape role model.

Mr Steele, 56, is a former MI6 officer who came to global attention after making unsubstantiated claims of Russian spies holding videos of US President Donald Trump with prostitutes.

Mr Browder, also 56, is a long-standing Putin critic and was deported in 2005 after being branded a threat to Russian security.

Mr Ashurkov, 49, was granted asylum by Britain in 2015 after he was forced to step down in his position as an investment banker in Russia because he had ties to Putin’s main political opponent, Alexei Navalny.

Mr Khordorkovsky, 57, was charged with fraud in 2003 but freed from jail in 2014 after Amnesty International declared him a prisoner of conscience (someone imprisoned because of their race, sexual orientation, religion, or political views). He has lived in the UK since 2015 and is fighting to secure free and fair elections in Russia.

Mr Chichvarkin, 46, founded Russia’s largest mobile phone company, Yevroset and is believed to have paid for Alexei Navalny’s medical bills after he was poisoned with a nerve agent last year and treated in a hospital in Germany.

Mr Karpichkov, 62, used to work in the Cold War-era spy service, the KGB, and was a major in its successor, the FSB. He moved to the UK in 1998 and has already survived two poisoning attempts.

The Russian spy who has come forward to warn the world that President Putin’s agents are hunting his opponents works for the FSB, Russia’s version of the British intelligence agency MI5.

The source, who is understood to be able to mask his identity using complex technology, warned that a Russian special ops team are getting ready to cross into Britain from Ireland. He told the Mirror: ‘Due to Covid almost all overseas operations were frozen. Now they are starting to activate them again.’

He uses pay-as-you-go phones which he can throw away easily to warn people in Britain that there is a message waiting for them on a USB drive. Messages are then automatically sent with an undetectable email.  It is believed that two of the targets have told British police about the hitlist.

It comes as the head of the British Army said the UK’s Special Forces will be tasked alongside MI6 to counter activities of Russian military intelligence in a major defence shake up.

General Sir Mark Carleton-Smith suggested the Special Air Service (SAS) and Special Boat Service (SBS) would be put on a ‘different trajectory’ in a major overhaul of the armed forces to be announced on Monday.

The overhaul could see Special Forces soldiers operating alongside MI6 to mount surveillance operations against Russian intelligence and military units.

The Army chief said some of their traditional roles would now be taken over by a new Ranger Regiment announced on Friday ahead of the publication of the Defence Command Paper. He said that in future Special Forces ‘will be tracking the changing and accelerating nature of the threat.

Defence Secretary Ben Wallace said armed forces needed to adapt to counter threats which had ‘changed beyond recognition’ in the past 30 years.  He pledged additional investment for ‘intelligence, surveillance and reconnaissance’ as well as for electronic warfare.

The National Cyber Force will be expanded, there will be a new Space Command to co-ordinate military and commercial operation and the Royal Navy will get a new Multi Role Ocean Surveillance ship (MROSS) protect vital undersea cables.  General Carleton-Smith told The Sunday Telegraph: ‘The most persistent and lethal threats are those associated with hostile state actors. 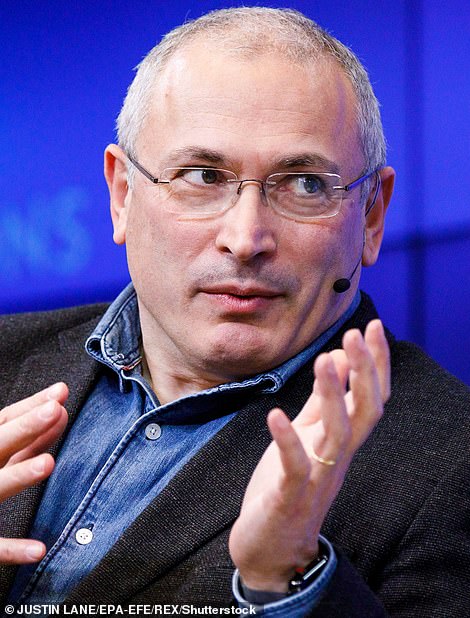 Mikhail Khordorkovsky (left), 57, is on the ‘kill list’. He was charged with fraud in 2003 but was released from jail in 2014 after Amnesty International declared him a prisoner of conscience (someone imprisoned because of their race, sexual orientation, religion, or political views). Bill Browder (right), 56, works with the Hermitage Fund – once the largest foreign investor in Russia. He is a long-standing Putin critic and was deported in 2005 after being branded a threat to Russian security 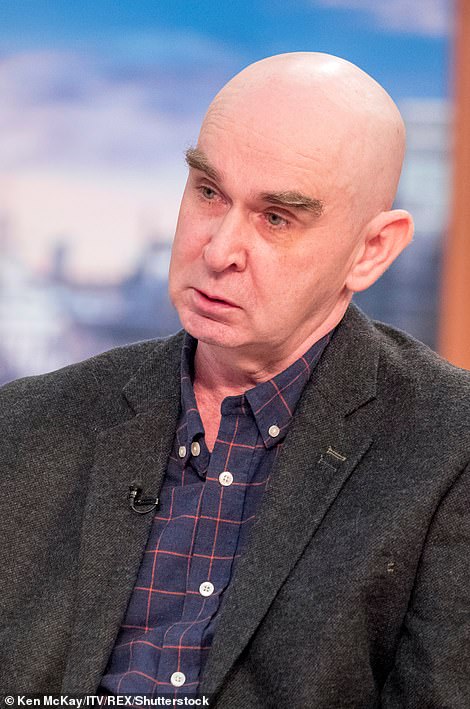 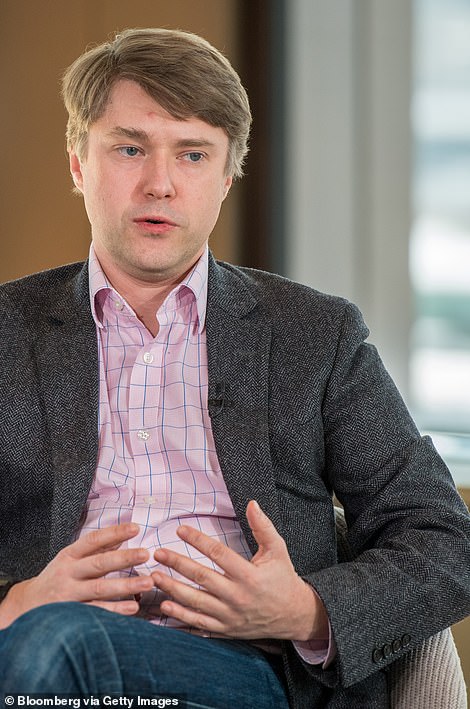 Boris Karpichkov (left), 62, used to work in the KGB and was a major in its successor, the FSB. He moved to the UK in 1998 and has already survived two poisoning attempts. Vladimir Ashurkov (right), 49, was granted asylum by Britain in 2015 after he was forced to step down in his position as an investment banker in Russia 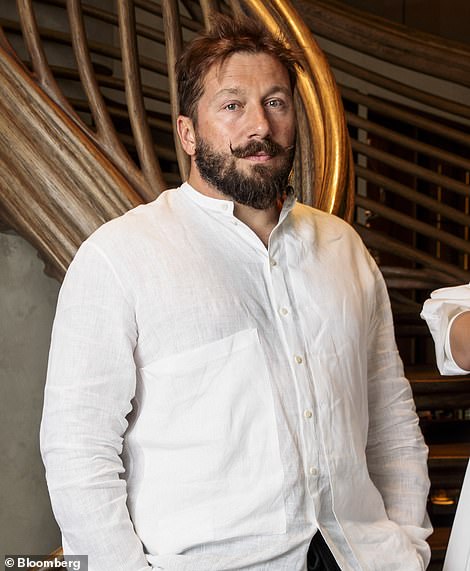 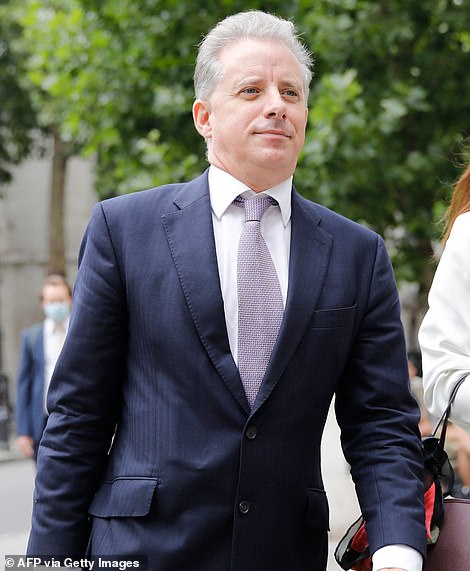 Evgeny Chichvarkin (left), 46, founded Russia’s largest mobile phone company, Yevroset and is believed to have paid for Alexei Navalny’s medical bills after he was poisoned with a nerve agent last year. Christopher Steele (right), 56, is a former MI6 officer who made unsubstantiated claims of Russian spies holding videos of Donald Trump with prostitutes 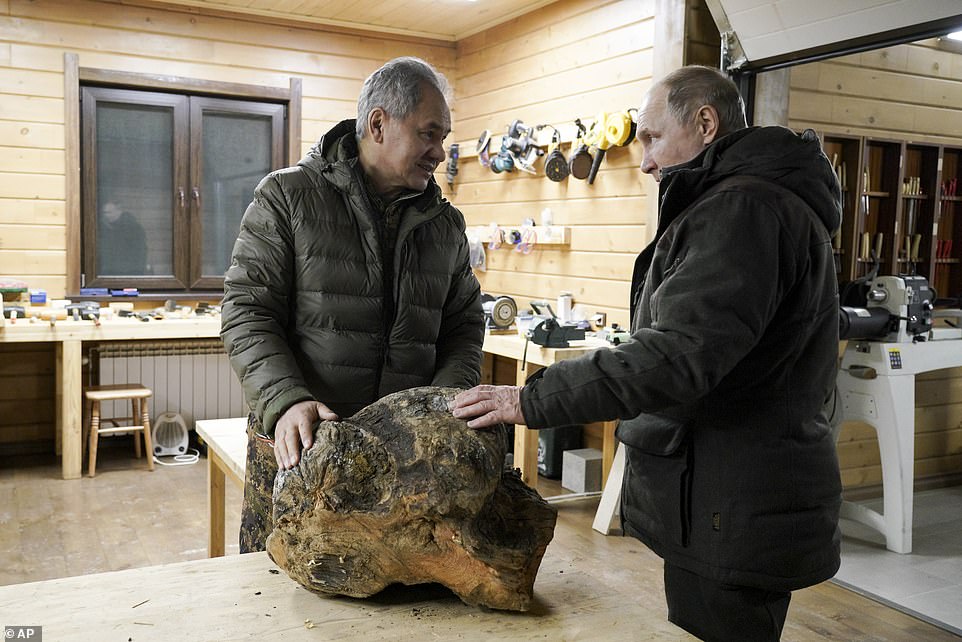 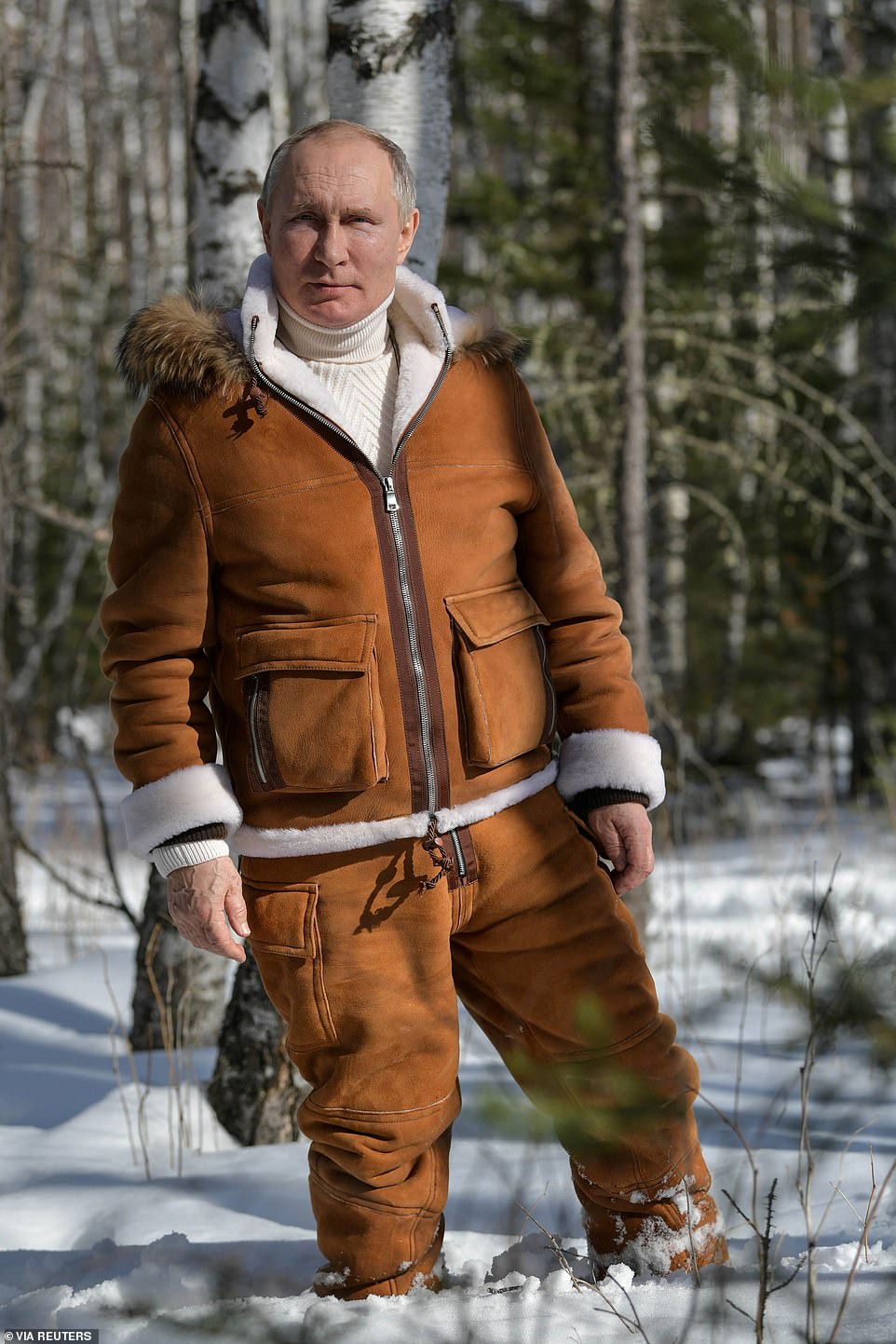 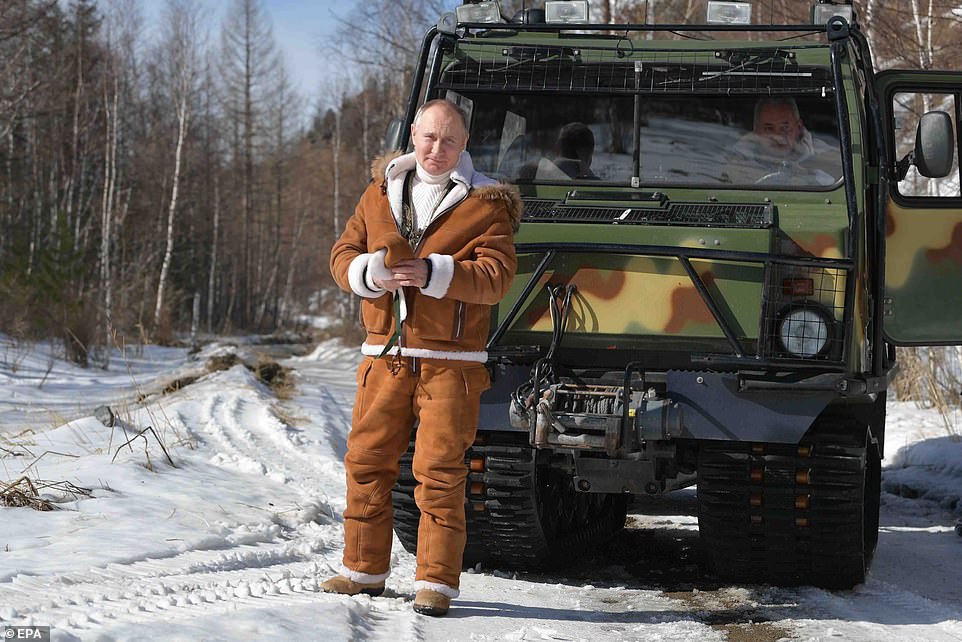 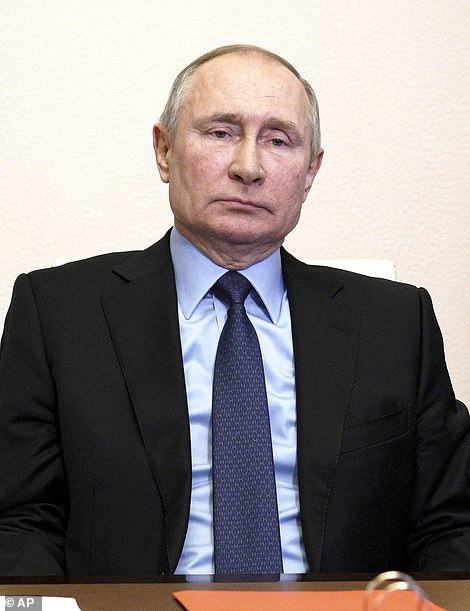 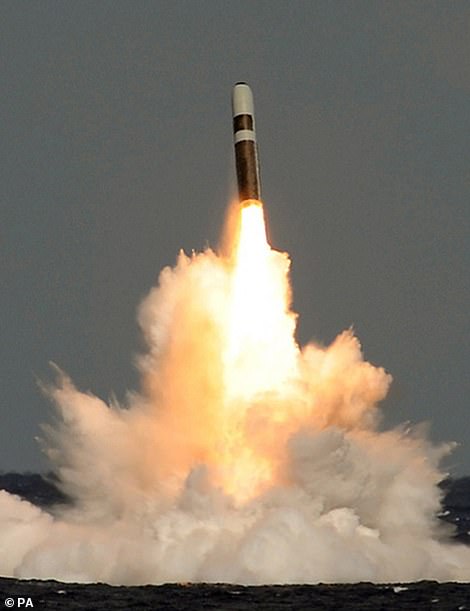 The Kremlin said it regretted the UK’s decision to increase its nuclear arsenal, after Britain unveiled plans to bolster its stockpile from 180 warheads to 260 by the end of the decade. Pictured: Russian President Vladimir Putin

‘So they’re tracking a different trajectory and what they leave behind is a vacuum where they need to hand off tasks, missions and responsibilities to a second echelon force. The Rangers will fit neatly into that.’

It is likely that Special Forces units will be tasked alongside MI6 with uncovering the activities of Russian military intelligence – the GRU – thought to be responsible for the Salisbury nerve agent attack on former spy Sergei Skripal and his daughter, The Telegraph reports.

Elite units could also be charged with countering the activities of the Wagner Group, a Russian mercenary organisation widely thought to act as proxies for the Kremlin.

Also writing in the paper, Mr Wallace added: ‘We can no longer take for granted the superiority of Western capabilities. Our enemies have infinitely more options,’ he said.

‘Encryption, precision, and information operations complicate the threat picture. We find ourselves constantly confronted in the ‘grey zone’ – aggressive actions below the threshold of open conflict.’

While the Army would get an additional £3billion, there are also understood to be cuts with a reduction of around 10,000 troops expected as well as cuts to armoured fighting vehicles and the last remaining C-130J Hercules transport aircraft.

The White House has spent weeks telegraphing a tougher posture toward Russia under a Biden administration. and Moscow has once again bristled at accusations that it serves as a ‘malign’ influence in global affairs.

Fueling the rising tensions is a startling new assessment by US intelligence that lays out Russia’s campaign to influence the 2020 elections – on the heels of the Treasury Department slapping sanctions on officials as retaliation for the poisoning of Navalny with a chemical agent.

Among those hit with sanctions was the director of Russia’s foreign intelligence service, the FSB.

And the comments mark the latest time when the new Biden team has sought to draw a sharp line on Russia distinguishing it from former President Donald Trump – who repeatedly praised President Putin and even appeared to take his side when he denied allegations of election interference during their infamous summit in Helsinki. 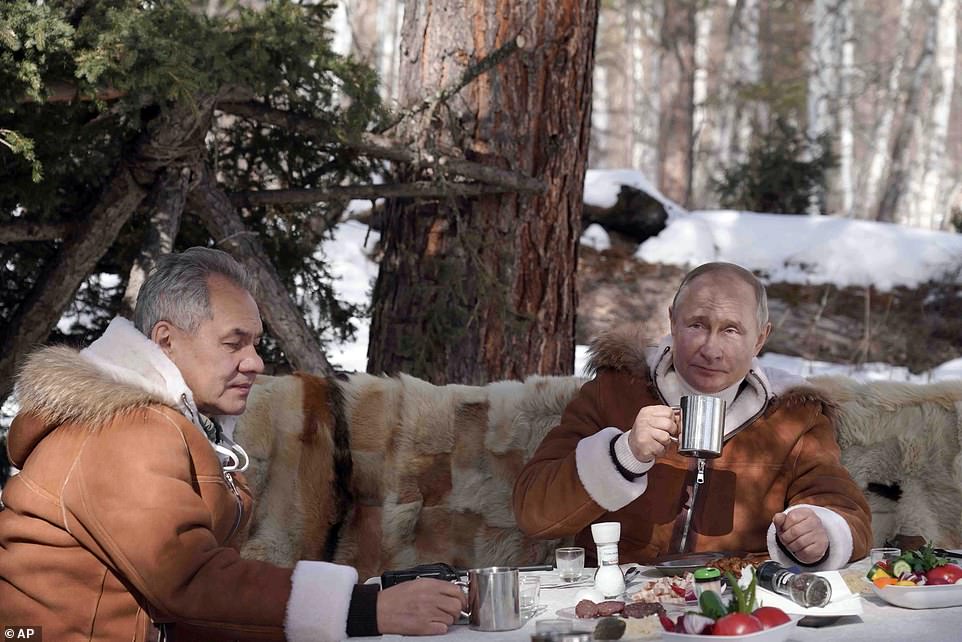 Six of those on the hitlist live in the UK: Vladimir Ashurkov, Mikhail Khordorkovsky, Evgeny Chichvarkin, Boris Karpichov, Bill Browder and Christopher Steele 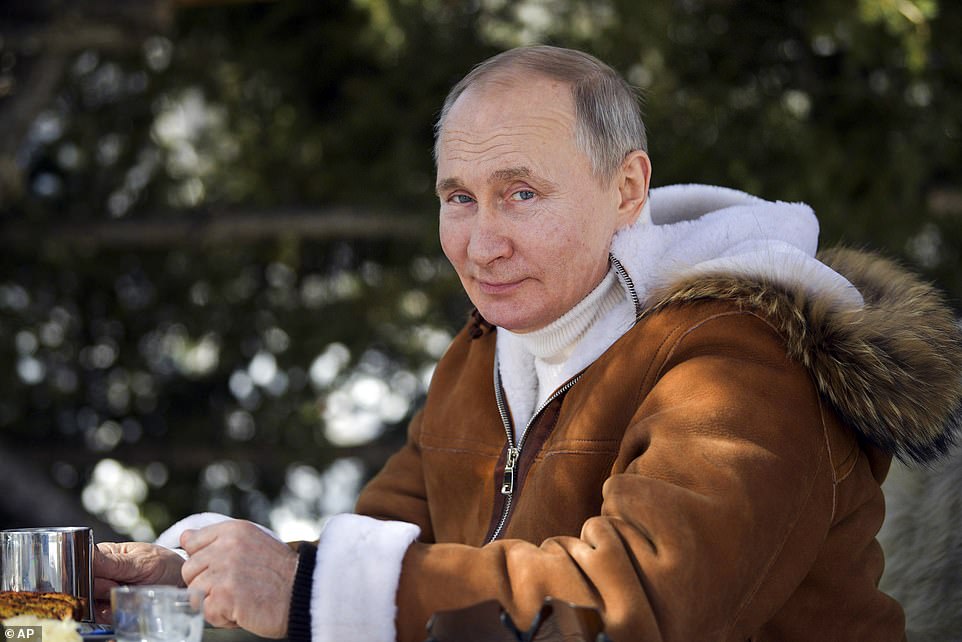 His bare-chested exploits have conjured for many Russians an image of Putin, 68, as an in-shape role model