Global oil prices are at the highest level for 14 years today – spiking to $140 per barrel on some markets – as the West considers banning imports of Russian oil that gives the pariah state $100billion-a-month to help fund his military.

Today the rouble continued to collapse as the US, UK and the EU tries to wean itself off Russian fossil fuels and more Western firms also pulled out, causing an earthquake in Putin’s economy.

Brent oil prices soared to a near 14-year high of $140 on Sunday as traders fretted over the fallout from Russia’s invasion of Ukraine.

Brent North Sea crude oil for May delivery reached $139.13 shortly after electronic trading opened last night heading towards a 2008 record high before retreating slightly over the next hour. The global average is around $130.

The FTSE 100 has also dropped below the symbolic 7,000 mark today and safe-haven gold broke $2,000 as investors grew increasingly fearful about the impact of the Ukraine war on the global economy.

In Britain, motorists will face even higher petrol prices with 5p being added to a litre of diesel every day over the past week and is likely to hit 175p across the country soon.

Washington is in ‘active talks’ with European allies about targeting Russia’s energy industry in the next round of sanctions, US Secretary of State Antony Blinken announced.

An oil import ban would be highly damaging to the Kremlin’s finances with President Biden reported to be considering visiting Saudi Arabia to urge them to increase oil production when Russian exports are boycotted. The US will also consider upping its own production.

But it would almost certainly also send oil and gas prices spiralling across the West, pushing up energy bills at a time when millions of British households are already struggling with a cost-of-living crisis.

Experts said it could be a ‘disaster’ for the most disadvantaged families. 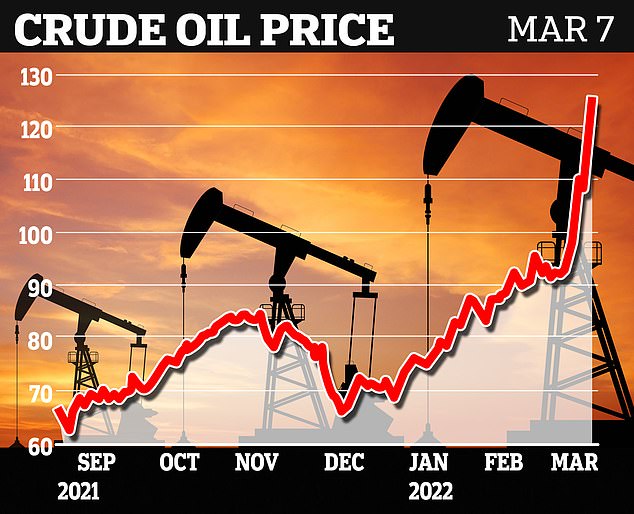 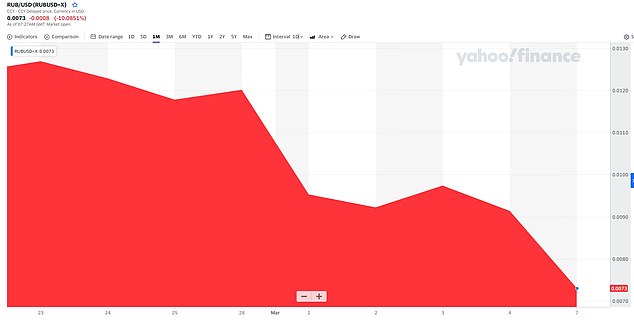 Meanwhile the rouble is getting even worse, and is now 129 to $1 – with one rouble worth much less than a cent

Oil prices surged by more than a fifth last week after Russia invaded Ukraine, finishing at $118 a barrel at close of trading on Friday and fuel prices hit record highs last week with petrol reaching 153.5p per litre, while diesel hit 157.47p. The RAC said petrol could hit 157p a litre if oil rose another 6 per cent to $125 a barrel. Some traders think it could even reach $200 a barrel.

David Morrison, senior market analyst at Trade Nation, said: ‘I think we’re going to see a very sharp bump in oil prices, even without the European approval that the US says it will seek before taking action. That means more pain for all consumers.

‘For some this will be a price worth paying to support Ukraine – but it’s a disaster for those already struggling.’

Last night Government sources said it was too early to say whether Britain would support a total ban on Russian oil.

They pointed out that it makes up only a very small proportion of UK imports – it is estimated to be only around two per cent, with the UK getting most of its crude from Norway and the US. The UK has so far targeted major Russian banks and individuals with sanctions while avoiding the energy sector. But there have been indications for several days that the Government is rethinking its position.

On Friday, Foreign Secretary Liz Truss indicated at a Nato meeting that Britain will look to target Russia’s energy industry in future rounds of sanctions.

Analysts warned Europe was far more vulnerable to the negative effects of an oil import ban than the US.

The US is exploring legislation to further isolate Russia from the global economy, including banning the import of its oil and energy products into the country.

The price of oil jumped more than 10 dollars (£7.5) a barrel on Monday as the conflict in Ukraine deepened amid mounting calls for harsher sanctions against Russia.

In a letter to Democrats released on Sunday night, House of Representatives speaker Nancy Pelosi said the legislation under consideration would also repeal normal trade relations with Russia and Belarus and begin the process of denying Russia access to the World Trade Organisation.

The US Congress intends to approve the Biden administration’s request for 10 billion dollars (£7.5) in humanitarian, military and economic support for Ukraine as part of omnibus government funding legislation this week, she added.

The surge followed the failure of temporary cease-fires in two Ukrainian cities failed on Sunday, for which both sides blamed each other.

Russia has said another ceasefire would start on Monday morning with the opening of humanitarian corridors in several areas, including Kyiv, Mariupol, Kharkiv and Sumy.

With the Ukrainian leader urging his people to fight in the streets, Russian President Vladimir Putin shifted blame for the invasion, saying Moscow’s attacks could be halted ‘only if Kyiv ceases hostilities’.

The outskirts of Kyiv, Chernihiv in the north, Mykolaiv in the south, and Kharkiv, the country’s second-largest city, faced stepped-up shelling late on Sunday, presidential adviser Oleksiy Arestovich said. Heavy artillery hit residential areas in Kharkiv and shelling damaged a television tower, according to local officials.

‘This is likely to represent an effort to break Ukrainian morale,’ the UK Ministry of Defence said of Russian tactics as the war entered its 12th day Monday. 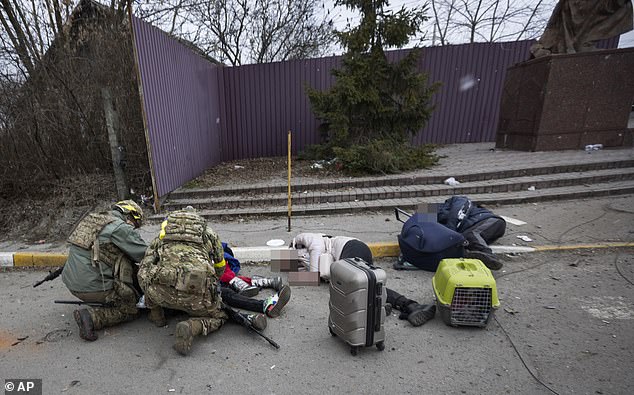 Fighting has caused 1.5 million people to flee the country, which the head of the UN refugee agency called ‘the fastest-growing refugee crisis in Europe since World War II’.

Russia has made significant advances in southern Ukraine and along the coast, but many of its efforts have become stalled, including an immense military convoy that has been almost motionless for days north of Kyiv.

Food, water, medicine and almost all other supplies were in desperately short supply in the southern port city of Mariupol, where Russian and Ukrainian forces had agreed to an 11-hour cease-fire that would allow civilians and the wounded to be evacuated. But Russian attacks quickly closed the humanitarian corridor, Ukrainian officials said.

‘There can be no ‘green corridors’ because only the sick brain of the Russians decides when to start shooting and at whom,’ Interior Ministry adviser Anton Gerashchenko said on Telegram.

A third round of talks between Russian and Ukrainian leaders is planned for Monday.

‘You should take to the streets! You should fight!’ he said on Saturday on Ukrainian television. ‘It is necessary to go out and drive this evil out of our cities, from our land.’

Mr Zelensky also asked the United States and Nato countries to send more warplanes to Ukraine. But that idea is complicated by questions about how to provide aircraft to Ukrainian pilots.

He later urged the West to tighten its sanctions on Russia, saying that ‘the audacity of the aggressor is a clear signal’ that existing sanctions are not enough.

A senior US defence official said on Sunday that about 95% of the Russian forces that had been arrayed around Ukraine are now inside the country. The official said Russian forces continue to advance in an attempt to isolate Kyiv, Kharkhiv and Chernihiv, but are being met with strong Ukrainian resistance.

The official, who spoke to the Associated Press on the condition of anonymity, said the convoy outside Kyiv continues to be stalled.

As he has often done, Mr Putin blamed Ukraine for the war, telling Turkish President Recep Tayyip Erdogan on Sunday that Kyiv needed to stop all hostilities and fulfil ‘the well-known demands of Russia’.

The Russian Defence Ministry on Sunday announced that its forces intend to strike Ukraine’s military-industrial complex with what it said were precision weapons. A ministry spokesman, Igor Konashenkov, claimed in a statement carried by the state news agency Tass that Ukrainian personnel were being forced to repair damaged military equipment so that it could be sent back into action.

‘I didn’t hear even a single world leader react to this,’ Mr Zelensky said on Sunday evening.

The Russian Defence Ministry also alleged, without providing evidence, that Ukrainian forces are plotting to blow up an experimental nuclear reactor in Kharkiv and to blame it on a Russian missile strike.

Mr Putin and French President Emmanuel Macron spoke on Sunday about the nuclear situation in Ukraine, which has 15 nuclear reactors at four power plants and was the scene of the 1986 Chernobyl nuclear disaster.

The men agreed in principle to a ‘dialogue’ involving Russia, Ukraine and the UN’s atomic watchdog, according to a French official who spoke on condition of anonymity, in line with the presidency’s practices. Potential talks on the issue are to be organised in the coming days, he said.

Mr Putin also blamed the fire last week at the Zaporizhzhia nuclear plant, which Ukrainian officials said was caused by Russian attackers, on a ‘provocation organized by Ukrainian radicals’.

International leaders, as well as Pope Francis, appealed to Mr Putin to negotiate.

The death toll remains unclear. The UN says it has confirmed just a few hundred civilian deaths but also warned that the number is a vast undercount.

About eight civilians were killed by Russian shelling in the town of Irpin, on the northwest outskirts of Kyiv, according to Mayor Oleksander Markyshin. The dead included a family.

Video footage showed a shell slamming into a city street, not far from a bridge used by people fleeing the fighting. A group of fighters could be seen trying to help the family.

The handful of residents who managed to flee Mariupol before the humanitarian corridor closed said the city of 430,000 had been devastated.

‘We saw everything: houses burning, all the people sitting in basements,’ said Yelena Zamay, who fled to one of the self-proclaimed republics in eastern Ukraine held by pro-Russian separatists. ‘No communication, no water, no gas, no light, no water. There was nothing.’

British military officials compared Russia’s tactics to those Moscow used in Chechnya and Syria, where surrounded cities were pulverised by airstrikes and artillery.