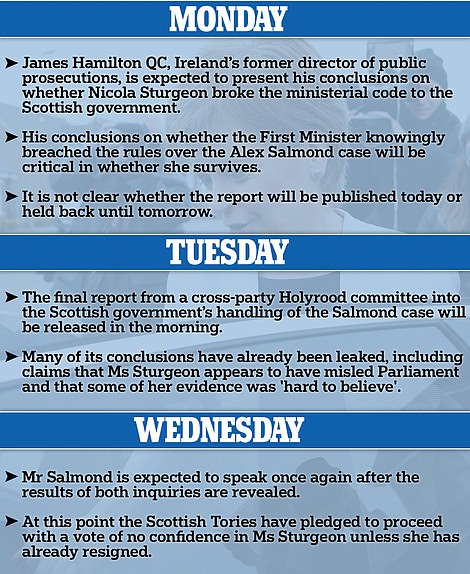 Nicola Sturgeon was tonight dramatically cleared by a QC of breaking the ministerial code over the Alex Salmond case.

James Hamilton QC said the First minister had not breached the rules in any of the respects he investigated.

‘I am of the opinion that the First Minister did not breach the provisions of the Ministerial Code in respect of any of these matters,’ his report concluded.

The finding comes as the verdict of a cross-party Holyrood committee is due to be published tomorrow – with leaks suggesting it has found she did break the rules.

The Scottish Tories are vowing to hold a vote of no confidence in Ms Sturgeon on the same day, amid growing evidence that the bitter civil war is doing massive damage to the SNP’s drive to split up the UK.

But the Scottish government chose this afternoon to release its long-awaited draft bill on holding a fresh vote on breaking up the UK.

It proposes using the same question as in 2014 – ‘should Scotland be an independent country?’ – despite evidence that using a ‘Yes’ or ‘No’ format boosts separatist support. In the 2016 EU referendum the options were ‘leave’ and ‘remain’.

Voting would also include over 16s, who are generally thought to be more in favour of independence.

The bill says the contest should be held in the first half of the Parliament due to be elected in May. The SNP has said it could be as early as this year.

Asked by journalists as she left home this morning whether she was going to resign, Ms Sturgeon tried to play down the crisis.

‘No, I am going to do what I’ve done every day for the past year, lead the country through a pandemic,’ she insisted.

The First Minister referred herself to the ministerial watchdog in January 2019 and asked Mr Hamilton to carry out an investigation after admitting she had met her predecessor to discuss claims of sexual harassment.

Separately a cross-party committee has been carrying out an inquiry into how the Scottish government bungled its handling of the complaints against Mr Salmond.

He was awarded more than £500,000 after bringing a judicial review, and later cleared at a trial.

Mr Salmond is expected to speak once again after the results of both inquiries are revealed – and could inflict another devastating blow on his successor.

Scottish Conservative leader Douglas Ross said the continued push for independence was ‘beyond the comprehension of most Scots’.

‘Scotland continues to be gripped by the gobal pandemic and even once normality slowly returns, the shockwaves will be felt for years to come,’ he said.

‘The SNP Government is mired in sleaze with nothing left to offer except yet more division and grievance.

‘A responsible government would be entirely focused on Scotland’s post-pandemic recovery, but Sturgeon and her ministers have become detached from reality and the priorities of ordinary families.’ 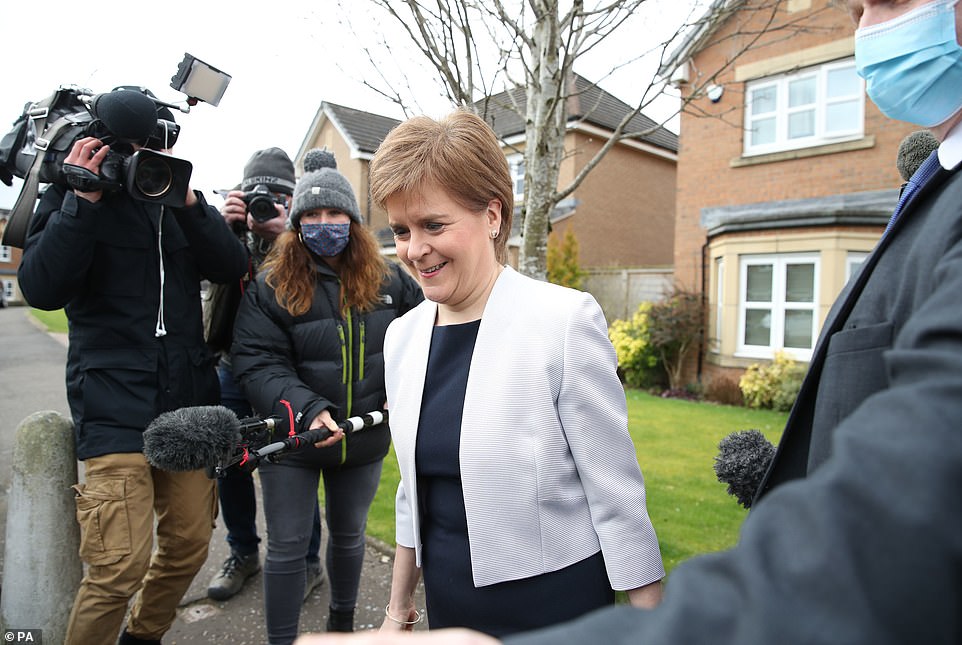 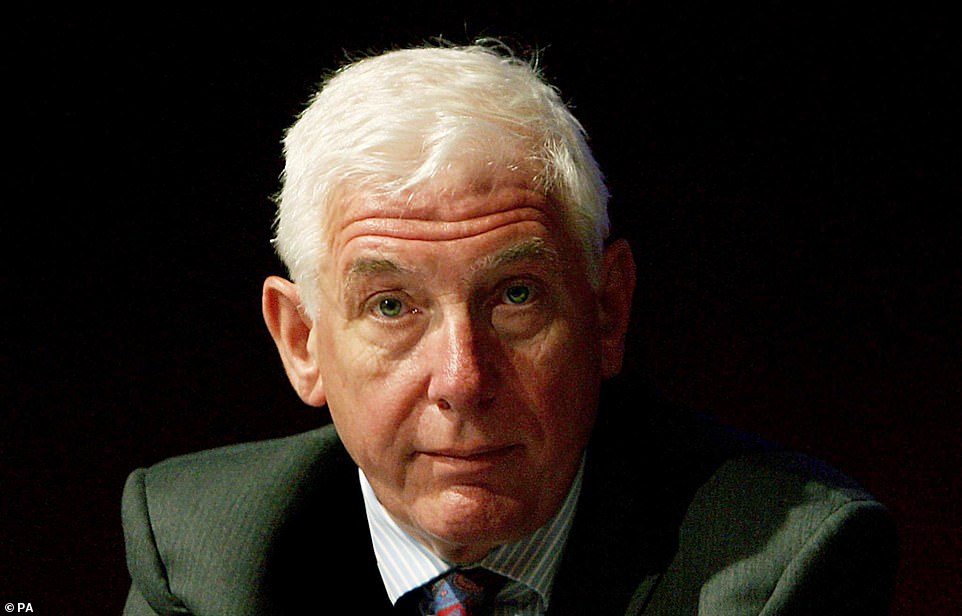 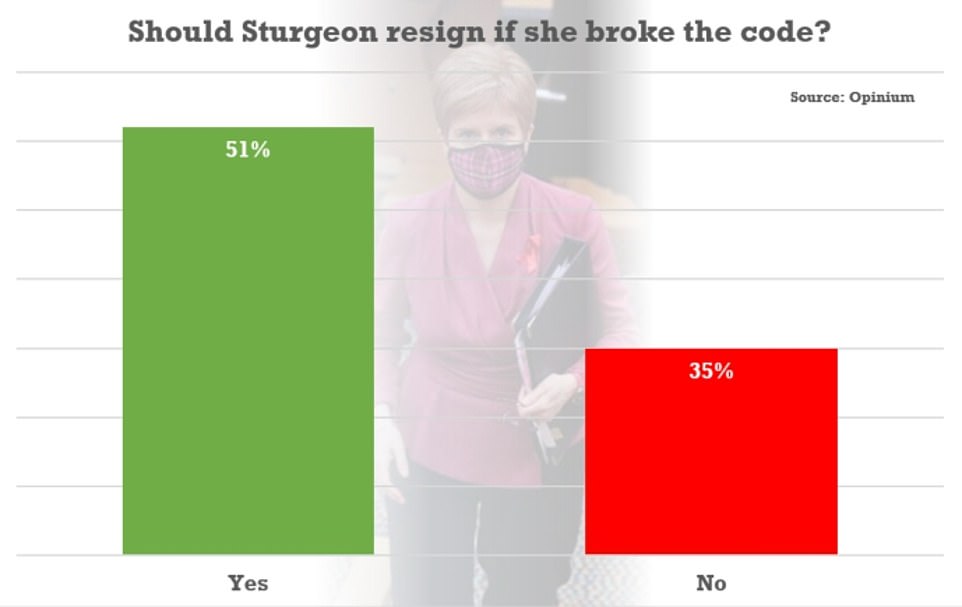 An Opinium survey published last week found that 51 per cent of Scots believe Ms Sturgeon should resign if she is deemed to have broken the ministerial code, compared to 35 per cent who say she should stay in place

Allegations, discussions, denials and a ‘forgotten’ key meeting between Sturgeon and Salmond

November 2017: Allegations regarding Alex Salmond’s behaviour are raised with the SNP by Sky News.

Nicola Sturgeon said she spoke to him about this – and he ‘denied it’. No further action was taken.

March 29, 2018: Ms Sturgeon meets Geoff Aberdein – Mr Salmon’s chief of staff – in her Scottish parliament office where she has admitted they discussed the possibility of a meeting with Mr Salmond. Ms Sturgeon – after initially forgetting about this meeting – says there was ‘the suggestion that the matter might relate to allegations of a sexual nature’.

April 2, 2018: Ms Sturgeon and Mr Salmond meet at the First Minister’s home. According to Ms Sturgeon, this is the first time she heard of the complaints made against him. Despite this, she has insisted that the matters discussed were party business. No minutes were taken at the meeting.

What she previously said: On January 8, 2019, Ms Sturgeon tells the Scottish Parliament she ‘first heard’ about sexual harassment allegations against Mr Salmond on April 2.

In 2018, Andrew Marr asked Ms Sturgeon: ‘Had you heard any stories about him before it broke in the press?’ She responded: ‘Obviously, absolutely not. Until, well I’ve said previously Alex Salmond informed me about these complaints in April, that was the first I had known.’

And what she later said : In 2020, giving written evidence to the Holyrood into her government’s handling of complaints against Mr Salmond, she said she ‘forgot’ about the March 29 meeting until  ‘late January/early February’ 2019.

She wrote: ‘From what I recall, the discussion covered the fact that Alex Salmond wanted to see me urgently about a serious matter, and I think it did cover the suggestion that the matter might relate to allegations of a sexual nature.’

September 14, 2018: A judicial review is launched after complaints by Mr Salmond over the fairness with how the claims against him were handled.

January 8, 2019: The Scottish government conceded defeat in the judicial review a week before it was due to launch. Mr Salmond wins £500,000 in legal fees. The court ruled the probe into Mr Salmond had been unlawful and tainted by apparent bias.

January 2019: Ms Sturgeon tells MSPs that Mr Salmond first told her about a probe into him on April 2.

March 23, 2020: Alex Salmond is cleared of all sexual assault charges and his supporters demanded a full inquiry into the Scottish Government’s handling of the scandal.

January 24, 2021: Speaking on the Andrew Marr show, Ms Sturgeon denies misleading the Scottish Parliament after ‘forgetting’ to tell MSPs about her meeting with Mr Salmond’s aide on March 29, 2018.

February 2021: The High Court in Edinburgh rules Mr Salmond’s evidence claiming his former chief of staff met with Ms Sturgeon on March 28, 2018, to discuss sexual assault allegations against the former first minister can be released.

Leaks at the end of last week claimed that the Holyrood inquiry has concluded it is ‘hard to believe’ Ms Sturgeon did not know of concerns about Mr Salmond’s behaviour before November 2017.

The MSPs have also reportedly decided that she broke the ministerial code by misleading the committee, although it is not clear if they believe she did so knowingly.

Ms Sturgeon has brushed off the apparent finding, insisting she stands by ‘all eight hours’ of evidence she gave and accusing opposition members of playing politics.

The SNP leader also appeared to lash herself to the separate report from Mr Hamilton on whether she broke the ministerial code – which is expected to be delivered to the Scottish government today, although the timing of the release is not yet known.

Polls have shown that a majority of Scots believe Ms Sturgeon should quit if she is found to have flouted the conduct rules, with the controversy also inflicting huge damage on support for her drive to split up the UK.

Even if she fends off the resignation calls the row looks set to dominate the run-up to crucial elections in May.

A survey by Opinium last week found 51 per cent of Scots think she should resign if she is found to have breached the code.

In contrast 35 per cent insisted she should stay in post.

Many surveys of Scots ask a similar question to 2014 and give a close result, with separatists ahead over recent months but the margin closing amid the SNP meltdown.

However, a recent Survation poll asked whether people ‘want Scotland to remain part of the UK’ – and found a 14 point advantage for staying in the union.

The draft bill proposes that the voting rights in the referendum be extended to match the franchise for Scottish Parliament and local government elections, allowing 16-year-olds to take part along with foreign nationals who have voting rights in devolved elections.

Ms Sturgeon is hoping to use elections happening in May as the springboard for her push to hold another referendum – despite Boris Johnson insisting he will refuse permission.

The SNP has hinted it is prepared to stage a wildcat vote if Westminster blocks a ballot with legal status.

Scottish constitution minister Mike Russell insisted today there would be no ‘democratic justification’ for shunning a poll if there is a majority for independence-backing parties in Holyrood after May.

Sections from the bombshell committee report were leaked two weeks after Ms Sturgeon gave testimony about her role in the Scottish Government’s botched investigation into Mr Salmond in 2018.

Ms Sturgeon had insisted she did not offer to intervene in the complaints process against Mr Salmond during a meeting with him on April 2, 2018.

Yet by a slim majority verdict of 5-4, the committee, which voted down party lines, is believed to have decided this was in ‘fundamental contradiction’ to testimony from Mr Salmond.

They say Mr Salmond’s account was corroborated by his legal adviser, Duncan Hamilton QC, who told the inquiry that Ms Sturgeon said: ‘If it comes to it, I will intervene.’

The report concludes: ‘Her [Ms Sturgeon’s] written evidence is, therefore, an inaccurate account of what happened and she has misled the committee on this matter. This is a potential breach of the ministerial code’.

Conservative MSP Adam Tomkins told the BBC yesterday: ‘The evidence is not just clear but overwhelming that Nicola Sturgeon has misled Parliament on countless occasions… she needs to resign.’

Mr Salmond was cleared of sexual assault at trial.

He won a civil case against the Scottish Government, which was found to have been ‘tainted by apparent bias’ and ordered to pay his £512,000 legal bill.

The temperature rose again yesterday as a former colleague claimed Ms Sturgeon has been ‘brought low by arrogance and pettiness’.

Ms Sturgeon was described as a ‘hugely gifted politician’ by Dorothy-Grace Elder, a former MSP.

But writing in a Scottish newspaper, she said: ‘Excessive secrecy and resentment of others have harmed an SNP Government which could have been great.

‘What is mistaken for discipline is really fear. The party is riddled with dirty tricks. The Salmond saga is only part of it all.’

She wrote in the Sunday Mail that despite sharing an office with Ms Sturgeon for years, the future leader never spoke to her as she ‘ignored those who weren’t cronies’. 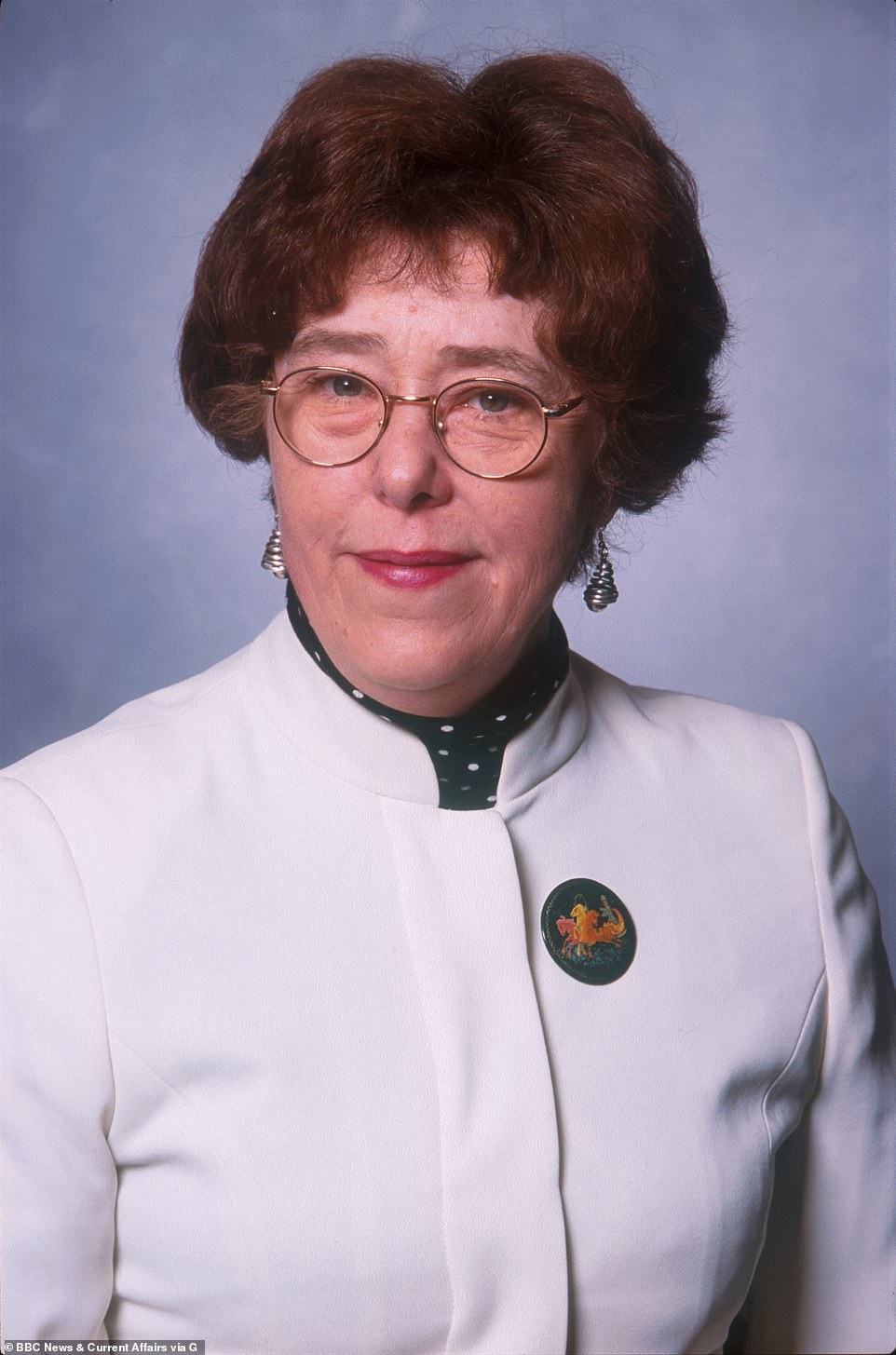 The women at the centre of the Salmond inquiry have said they will be making a formal complaint to the Scottish Parliament after their evidence was leaked to a newspaper.

In a statement released through Rape Crisis Scotland on Sunday, the two women who made complaints of harassment against former first minister Alex Salmond said they would be making a formal complaint over the leak.

A story in The Sunday Times claims the women, giving evidence in private last Monday, painted a picture of a demeaning environment for women, with one saying it was ‘like the Wild West’.

The statement said the leak was a breach of the MSP code of conduct, as well as ‘a violation of the trust we placed in the committee’, as well as raising concerns about the accuracy of the leak. 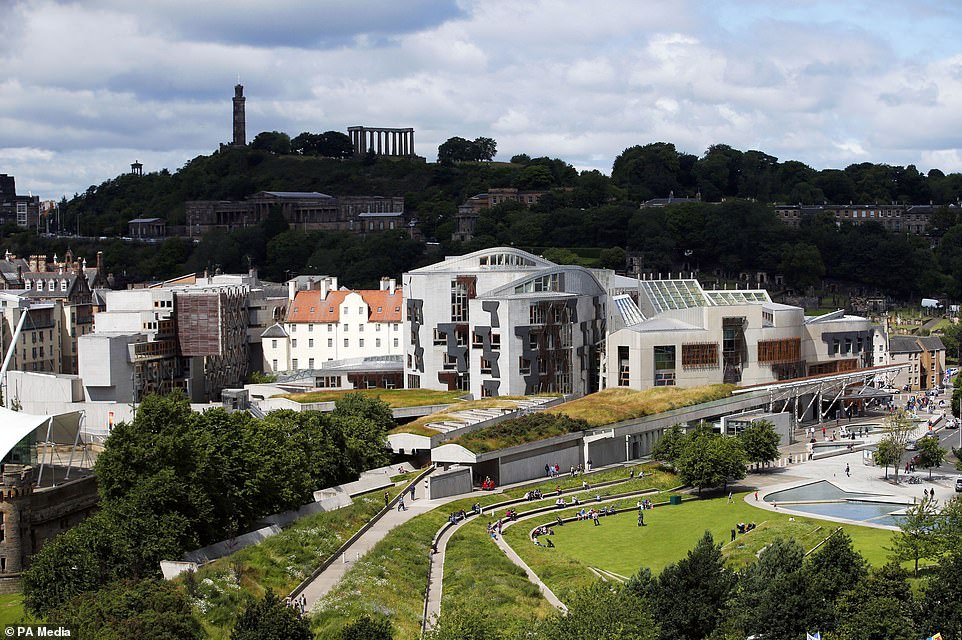 It added: ‘The reporting of our evidence has included inaccuracies and distortions, which appear to be intended to serve a political agenda.

‘Complainers in this case have been subject to regular attacks and misrepresentations on social media, and have found their experiences repeatedly exploited for political purposes during the inquiry.

‘For committee members to perpetuate this is indefensible and an abuse of their position.

‘We will be making a formal complaint.’