A new study by researchers of Massachusetts Institute of Technology has revealed that the risk of being exposed to COVID-19 is as great at 60 feet as it is at six feet indoors.

The research questions COVID-19 guidelines from the Centers for Disease Control and Prevention and the World Health Organization, which both suggested early last year that people should socially distance themselves by six feet in both indoor and outdoor spaces.

However, the study, which was published last week in Proceedings of the National Academy of Science of the United States of America, shows that even while wearing a mask in well-mixed spaces, ‘one is no safer from airborne pathogens at 60 ft than 6 ft’.

The study came to this conclusion using calculations that factored in several issues that could affect transmission, including air filtration, immunization, variant strains, and the amount of time spent inside. 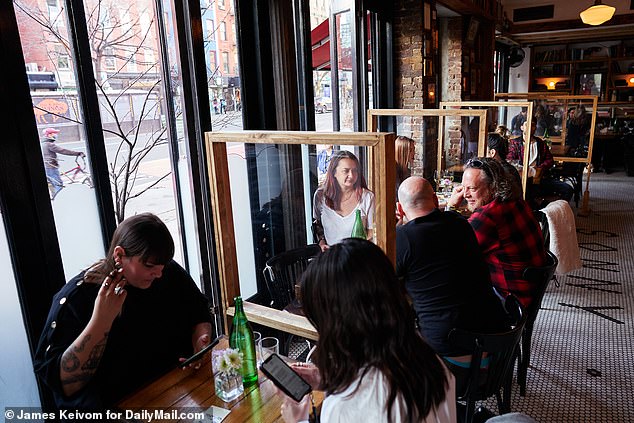 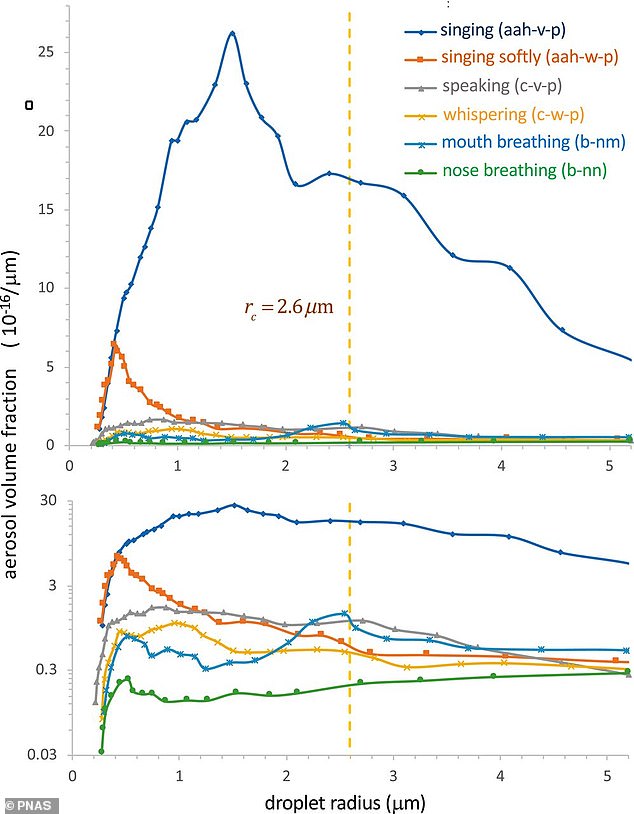 Researchers also looked at respiratory activity such as breathing, eating, speaking or singing, which are activities that could allow a person to send pathogen-laced droplets (activity depicted) through the air. The study found that no matter if you’re more than six feet away from an infected person who is singing, you’re still at risk indoors

Researchers also looked at respiratory activity such as breathing, eating, speaking or singing.

MIT professor Martin Bazant told CNBC: ‘We argue there really isn’t much of a benefit to the 6-foot rule, especially when people are wearing masks.

‘It really has no physical basis because the air a person is breathing while wearing a mask tends to rise and comes down elsewhere in the room so you’re more exposed to the average background than you are to a person at a distance.’

Bazant noted that the important variable that the CDC and WHO missed is the amount of time spent indoors.

The researchers also said that their analysis shows that many establishments that were shut down throughout the pandemic ‘don’t need to be’.

‘Often times the space is large enough, the ventilation is good enough, the amount of time people spend together is such that those spaces can be safely operated even at full capacity and the scientific support for reduced capacity in those spaces is really not very good,’ Bazant told CNBC.

‘I think if you run the numbers, even right now for many types of spaces you’d find that there is not a need for occupancy restrictions.’ 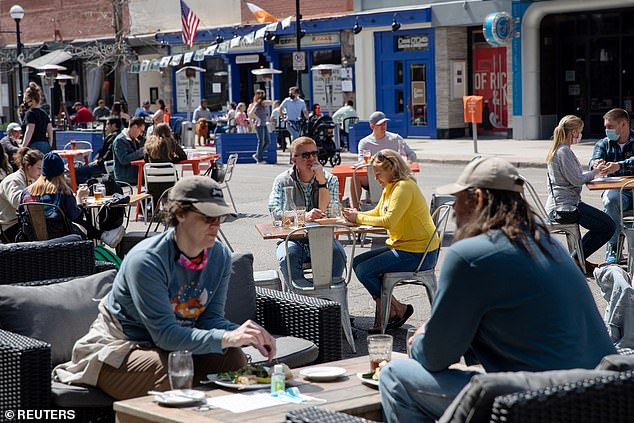 In the case of outdoor dining, researchers said it doesn’t much sense because ‘the infected air would be swept away and very unlikely to cause transmission’

In addition, the study looked at pathogen-laced droplets which travel through the air when people talk, eat or breathe indoors.

Charts from the research show how people sitting in a room while a person is singing could be impacted by the droplets even if an infected person is wearing a mask.

For instance, if a person with COVID-19 is wearing a mask and singing indoors, another person sitting across the room is not more protected than someone who is sitting six feet away from the infected individual.

This is an indication of why the time a person spends indoors with an infected person is so important, according to researchers. However, masks do help by blocking plumes of air.

In the case of outdoor dining, Bazant said it doesn’t much sense because ‘the infected air would be swept away and very unlikely to cause transmission’.

On Sunday, Dr Fauci said that he expects the CDC to issue updated guidelines on wearing masks outside.

‘Obviously the risk is really very low, particularly if you’re vaccinated,’ Fauci said of outdoor activities during ABC’s This Week. 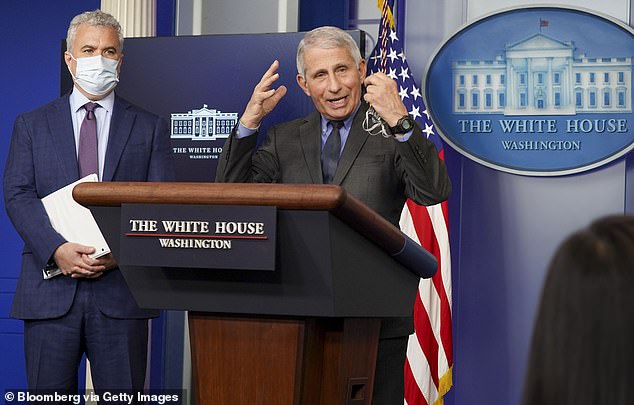 On Sunday, Dr Fauci said that he expects the CDC to issue updated guidelines on wearing masks outside. ‘Obviously the risk is really very low, particularly if you’re vaccinated,’ Fauci said of outdoor activities 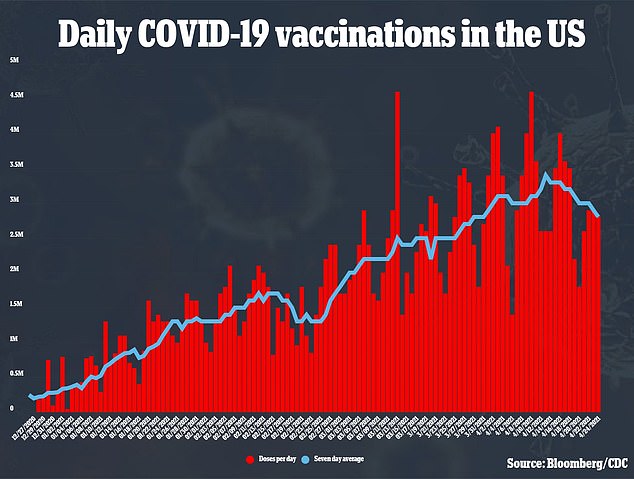 Bazant also believes that the findings of his research could explain why states like Texas and Florida haven’t seen huge spikes in transmission despite being fully open.

Texas and Florida, which have completely reopened, are reporting fewer coronavirus cases than Michigan, Pennsylvania and New York, which have COVID-19 restrictions and mask mandates in place, according CDC data.

Texas Gov Greg Abbott ended a mask mandate on March 10 and fully reopened the state. In Florida, which doesn’t have a mandate, Gov Ron DeSantis allowed businesses to fully reopen in September.

However, there are still restrictions in place for Pennsylvania, New York and Michigan, which for the last few weeks led the daily increase in COVID-19 cases.

According to data from the Centers for Disease Control (CDC), Michigan reported 390.2 cases of the virus per 100,000 in the last seven days.

In Pennsylvania, health officials have reported 221.4 cases per 100,000 in the last seven days. 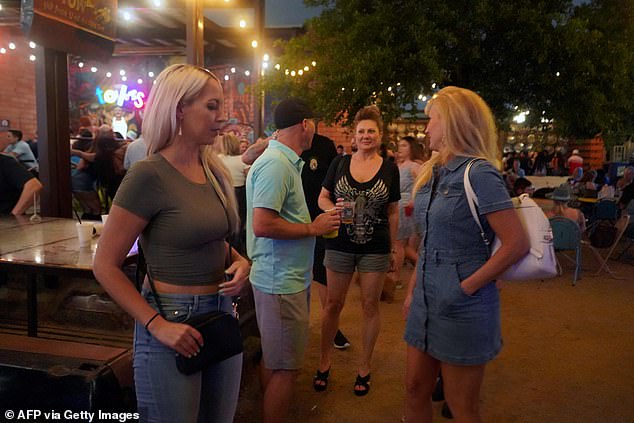 Bazant also believes that the findings of his research could explain why states like Texas (above) and Florida haven’t seen huge spikes in transmission despite being fully open. Texas and Florida report less daily cases than states like New York where there are still restrictions

Despite the number being lower than Michigan, Pennsylvania and New York – which all have mask mandates – the Sunshine State’s increase in infections keeps it in the top 10 states with the highest daily cases.

Fauci said that he believes the US is ‘doing very well’ on vaccinations though the level of infections remain high with an average of nearly 60,000 daily cases in the last week.

Meanwhile, more than five million people who have received their first COVID-19 shot have skipped out on their second dose.

According to the New York Times, that estimate represents nearly eight per cent of the American population who received the first shot of the Pfizer or Moderna vaccines.

Some people have opted out of the second dose because they believe they’re sufficiently protected with a single shot. Others are fearful of the flulike side effects.

But the fault isn’t just on the millions who haven’t received their second dose. Vaccine providers have been forced to cancel second-dose appointments because they ran out of supply.

In one example, several Walgreens customers were unable to get their second because they didn’t have the right vaccine on hand, according to the Times.

‘I’m very worried, because you need that second dose,’ Dr Paul Offit, a professor at the University of Pennsylvania, told the newspaper.

Some states are also finding that people aren’t interested in getting the shots and are having to turn down vaccine deliveries. Louisiana has stopped asking the federal government for its full allotment of COVID-19 vaccine.

About three-quarters of Kansas counties have turned down new shipments of the vaccine at least once over the past month. And in Mississippi, officials asked the federal government to ship vials in smaller packages so they don’t go to waste.

As the supply of coronavirus vaccine doses in the US outpaces demand, some places around the country are finding there’s such little interest in the shots, they need to turn down shipments.

‘It is kind of stalling. Some people just don’t want it,’ said Stacey Hileman, a nurse with the health department in rural Kansas’ Decatur County, where less than a third of the county’s 2,900 residents have received at least one vaccine dose.

More than half of American adults have received at least one vaccine dose, and President Joe Biden last week celebrated eclipsing 200 million doses administered in his first 100 days in office.