House Speaker Nancy Pelosi announced on Sunday that the Biden administration has requested $10 billion for aid in Ukraine, as Congress members consider a bill to halt the import of Russian oil.

Acting Director of the White House Office of Management and Budget Shalanda Young laid out the request for $10 billion in aid on Thursday, asking Congress members to include the money in a planned budget agreement that Congress is trying to finish before a March 11 deadline, according to the Philadelphia Inquirer.

Young said the money would cover ‘additional humanitarian, security and economic assistance in Ukraine and the neighboring region in the coming days and weeks.’

On Sunday, Pelosi said Congress ‘intends to enact this emergency funding this week as part of our omnibus government funding legislation.’

‘As President Biden has made crystal clear, American troops will not go to war in Ukraine – but our nation can provide military equipment and support our allies who are supplying airplanes to Ukraine,’ she said in a statement. 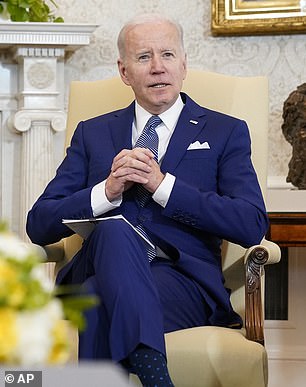 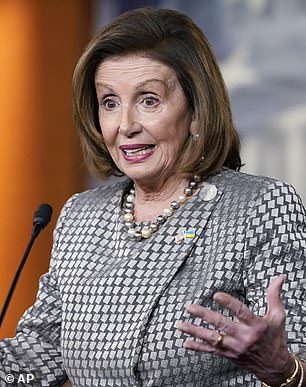 House Speaker Nancy Pelosi, right, announced on Sunday that the Biden administration has requested $10 billion in aid for Ukraine and Congress is ‘exploring’ a bill that would ban the import of Russian oil

Pelosi also announced on Sunday that the House is ‘exploring’ a bill that would ‘ban the import of Russian oil and energy products into the US, repeal normal trade relations with Russia and Belarus and take the first step to deny Russia access to the World Trade Organization.’

The legislation would also empower the president to raise tariffs on Russian imports, she said.

‘Let me be clear: the United States need not choose between our democratic values and our economic interests,’ Pelosi said. ‘The Administration and the Congress remain laser-focused on bringing down the higher energy costs for American families and our partners stemming from Putin’s invasion.

‘We salute President Biden for leading our allies in releasing 60 million barrels of oil from strategic reserves – including 30 million from American reserves in the SPR – to stabilize global markets.

‘And in our visit to the Munich Security Conference, we were encouraged by the statements of our allies – especially the European Union – that they will continue to diversify their energy supply and reduce their dependence on Russian energy.’ 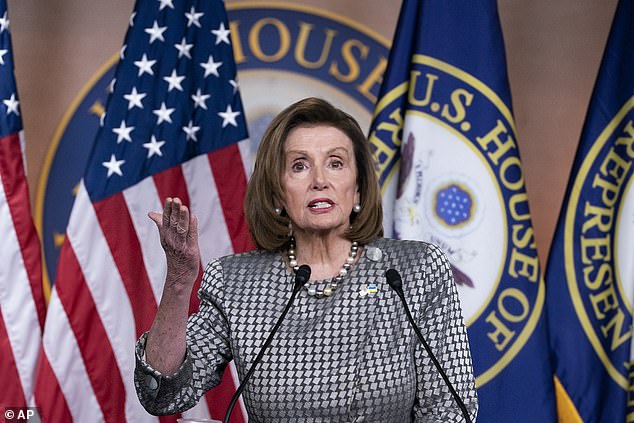 Pelosi has already expressed her support for legislation to ban Russian oil imports, after Sen. Joe Manchin and Sen. Lisa Murkowski introduced a bipartisan bill last week to do so.

Republicans have been pushing for the oil ban, and some Democrats have supported it to punish President Vladimir Putin for his alleged war crimes.

‘I’m all for that,’ Pelosi said when asked about the proposal last week, according to PBS. ‘Ban it.’

The United States imports just a small amount of oil from Russia – about 7 percent of all imports of crude oil and petroleum products.

In 2021, CNBC reports, the US brought in 245 million barrels of crude oil and petroleum products from the country – a one-year increase of 24 percent.

But in December, the most recent month for which data is available from the Energy Information Administration, Russian imports of crude oil were only about 1.4 percent of total United States imports, according to the Washington Post.

And at the time, the United States was producing more than 128 barrels of crude oil domestically for every barrel of crude imported from Russia.

Meanwhile, about 60 percent of Russia’s crude oil exports go to Europe, and an additional 20 percent go to China – Russia’s biggest customer and a sympathetic partner in Russia’s current efforts. 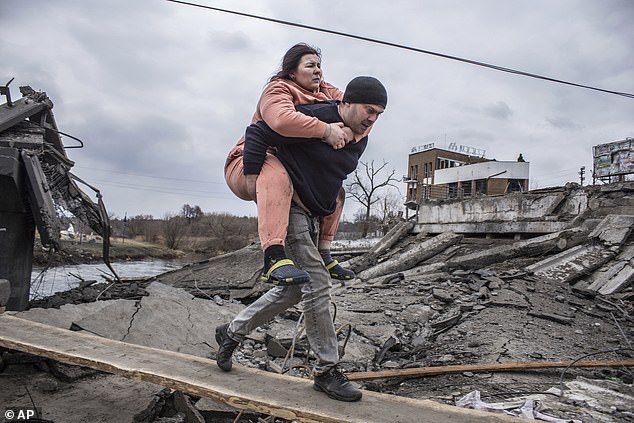 Ukrainian residents are trying to flee the war-torn country. A man is seen here carrying a woman while fleeing Irpin, near Kyiv, on Sunday 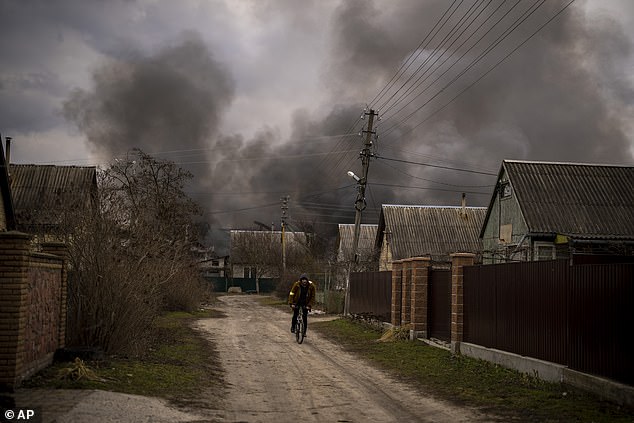 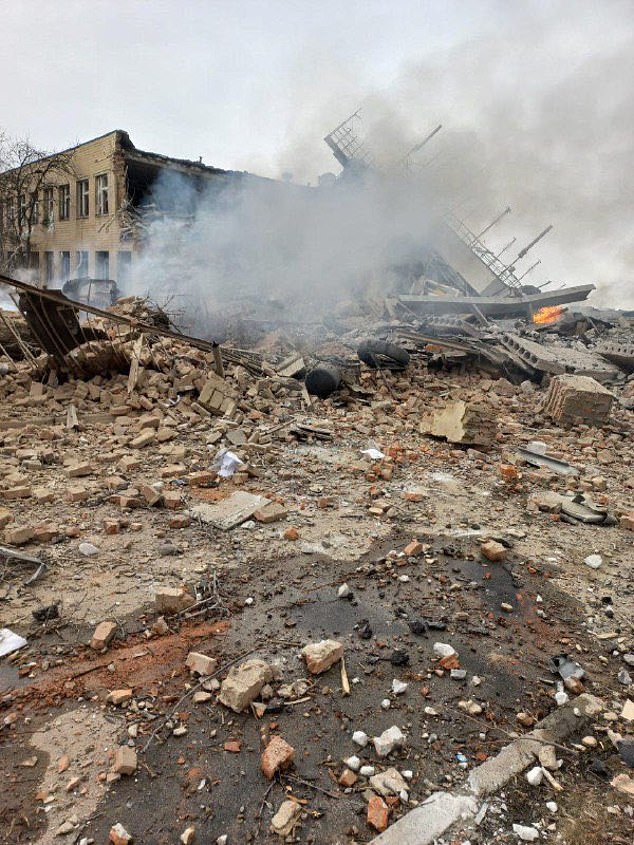 Bombings continued throughout Ukraine on Sunday. The Vinnytsia airport is pictured here

U.S. officials also announced on Sunday that the country is in talks with Poland in order to orchestrate a deal that would allow Polish fighter jets to be flown by pilots from the Ukrainian Air Force in order to combat Russia’s air superiority.

The deal would see Ukraine take Poland’s 28 Russian-made MiG-29 warplanes, which would in turn be replaced by a fresh set of F-16s by the United States.

Secretary of State Anthony Blinken told CBS’s Face the Nation host Margaret Brennan: ‘That gets the green light. In fact, we’re talking with our Polish friends right now about what we might be able to backfill their needs if in fact they choose to provide these fighter jets to the Ukrainians. What can we do?

‘How can we help to make sure that they get something to backfill the planes that they’re handing over to the Ukrainians?’

The White House is now working out the practicalities of carrying out a deal, including the crucial question of how the Ukrainians would physically be able to get their hands on the planes.

‘We are also working on the capabilities we could provide to backfill Poland if it decided to transfer planes to Ukraine,’ a White House spokesperson told the Financial Times. 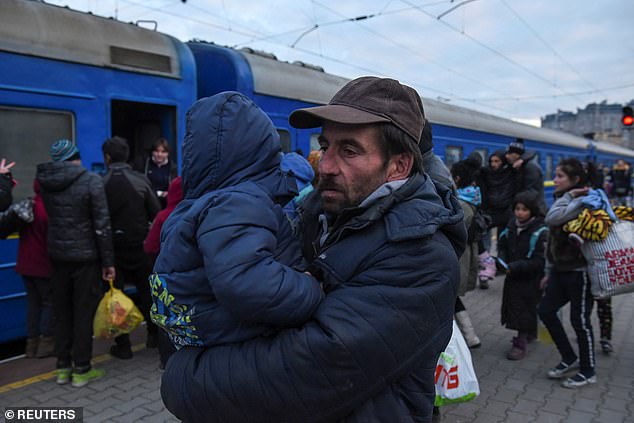 A man carried a child as passengers, including many who were fleeing Ukraine, boarded a train to leave the city of Odessa on March 6 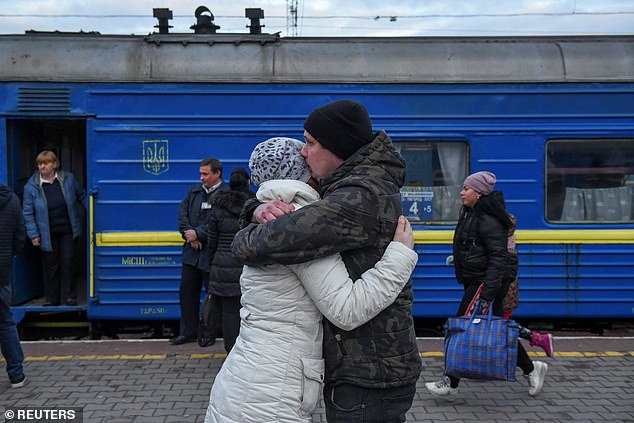 A couple embraced as they said goodbye amidst the fighting

But Russia’s Defense Ministry on Sunday warned countries, including NATO member Romania, against hosting Kyiv’s military aircraft, saying they could end up being involved in an armed conflict.

Defense Ministry spokesman Igor Konashenkov said in a video briefing that some Ukrainian combat planes had redeployed to Romania and other Ukraine neighbors he did not identify.

He warned that if those warplanes attacked the Russian forces from the territory of those nations, it ‘could be considered as those countries’ engagement in the military conflict.’

Konashenkov said: ‘We know for sure that Ukrainian combat aircraft have flown to Romania and other neighboring countries.

‘The use of the airfield network of these countries for basing Ukrainian military aviation with the subsequent use of force against Russia’s army can be regarded as the involvement of these states in an armed conflict.’