A Spring Breaker has been charged with inciting an ‘unruly crowd’ of hundreds of party-goers in Miami to riot on Sunday evening.

Miami Beach police announced Jovan Washington, 30, from Indiana, has been charged with inciting a riot, disorderly conduct and violating a curfew following the wild partying and resulting riots that have plagued the city.

Sunday night rounded off a chaotic weekend in the Florida city where thousands of tourists have flocked to enjoy Spring Break parties despite the coronavirus pandemic.

On Saturday, Miami Beach officials ordered a curfew after thousands took over the city’s Art Deco Cultural District for the annual parties, spawning a wave of unruly behavior, drunken brawls, vandalism and arrests.

At around 8:30pm, a team from the Miami Beach Police Department responded to 911 calls about ‘an extremely large crowd’ of 400 to 500 at 8th Street and Pennsylvania Avenue. 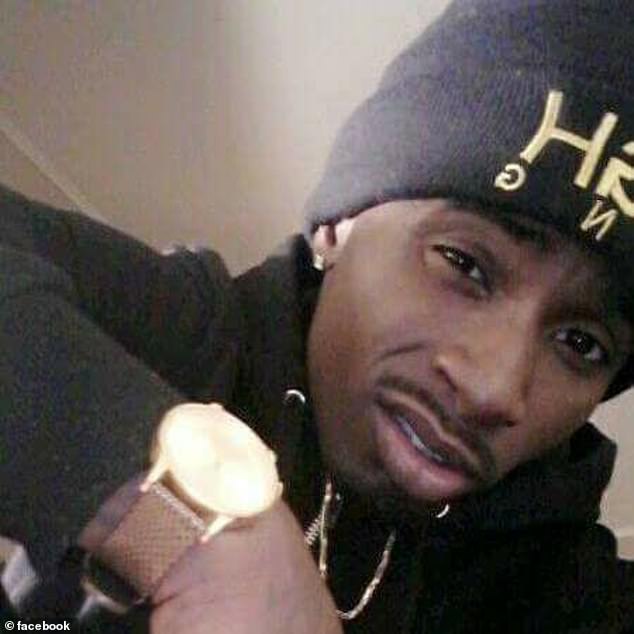 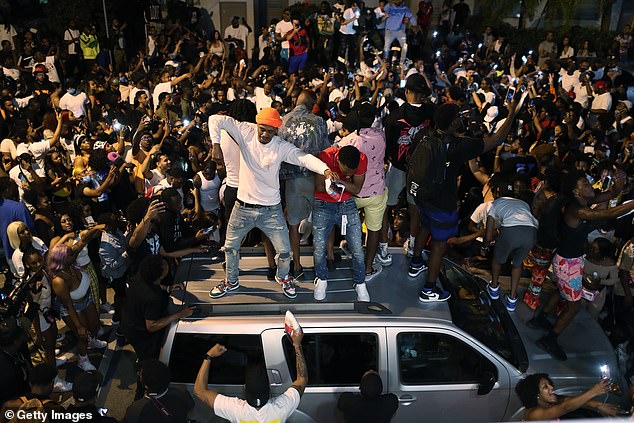 Pictured: People crowd around people as they dance on top of a car ahead of a curfew going into effect on March 21, 2021 in Miami Beach, Florida

Officers told the crowd that the city was under a ‘state of emergency’ and to clear the area, however, they were ‘uncooperative.’

Police said Washington was ‘enticing the crowd with music from speakers’, and that they then damaged nearby vehicles by jumping up and down on them, denting the roofs and destroying windshields.

Police also said several people made ‘obscene’ gestures toward officers, taunting them, and that they feared for their safety because of the crowd’s growing aggressiveness.

The officers caught up with Washington on another street, saying that he continued to play loud music and was telling the ‘unruly crowd to not follow’ the police orders.

Officers were ‘largely outnumbered’ and said Washington’s actions provoked the group to become more hostile toward them. 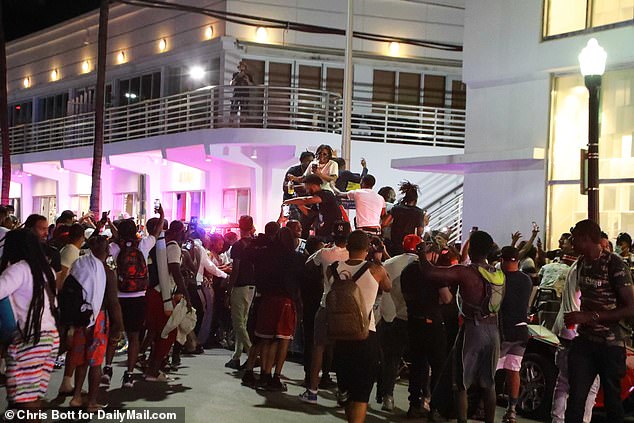 According to the officers, Washington ‘enticing the crowd with music from speakers’, and that the people he was enticing were jumping up and down on vehicles, causing significant damage to them. Pictured: People jump on a car in Miami Beach on Sunday, March 21

Eventually, the officers were able to arrest Washington and confiscate the speaker, at which point he was taken to MPD jail.

He appeared in court on Tuesday and posted a $2,500 bond, telling the judge: ‘My speaker wasn’t even that loud’, according to WPLG Local 10.

Authorities said that at least five officers from MBPD were injured during the recent chaos.

‘It’s really been a dangerous week,’ Miami Beach Police Officer Ernesto Rodriguez told the network. ‘We’ve seen a lot of fights, we’ve seen a lot of viral social media videos that are disturbing, and as a police department we don’t deny that.’

Police reportedly made more than 1,000 arrests, seized nearly 100 guns and even brought in SWAT teams that used pepper bullets to disperse crowds.

In the end, the city decided to order an emergency 8pm curfew that will likely be extended into April.

‘It’s been nuts. People are going wild right now,’ Chris Nelson, who is visiting from Orlando, told Local 10. ‘We’ve seen some people like, jumping on, like, light poles and all types of crazy stuff.’

Miami Beach was calmer Monday evening after the raucous weekend. Officers along Ocean Drive moved in on a crowd of partygoers after the 8pm curfew fell, as many took off running. One person was detained, but the area was much calmer than the night before, Local 10 reported. 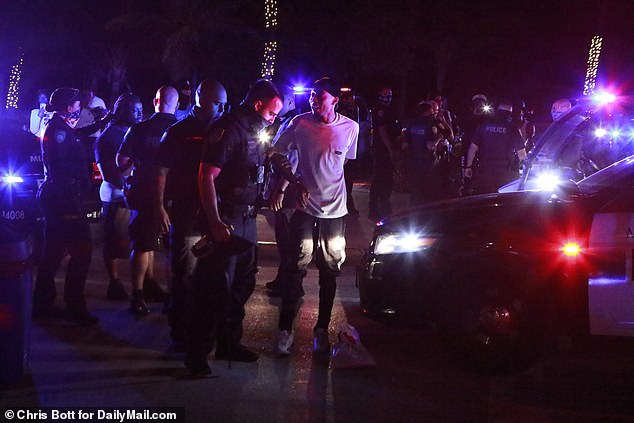 Pictured: A man is arrested by police in Miami for drinking from an open container on South Beaches Ocean drive, Tuesday 23 March 2021 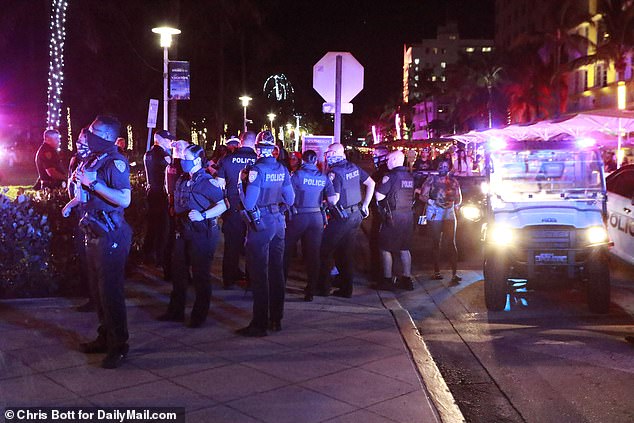 David Rivero, manager of Miami Beach’s Puerto Sagua restaurant, expects to lose three hours of business a night during spring break due to the curfew.

Even so, Rivero sees the early closure as necessary to keep residents, tourists and workers safe in one of America’s top party destinations amid coronavirus concerns.

‘There’s been multiple shootings on multiple nights, gang fights, stabbings and a dead body in the middle of the intersection,’ the 55-year-old Rivero said.

Miami Beach business owners interviewed by Reuters news agency voiced a mix of disappointment and resignation over the crackdown.

The 8 p.m.-to-5 a.m. nightly curfew in a ‘high impact zone’ in South Beach has cut deeply into the revenues of restaurants, bars and other establishments still struggling to recover from pandemic-related financial losses.

Rivero feels the event has only exacerbated crime in the Art Deco district. 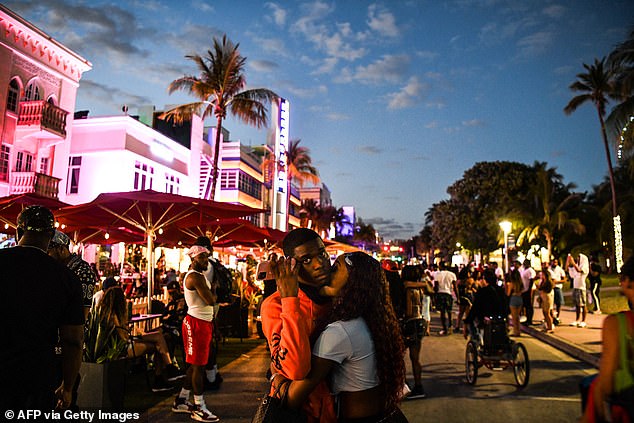 The scenes on Sunday night rounded off a chaotic weekend in Miami Beach, Florida where thousands of tourists have flocked in recent weeks despite the coronavirus pandemic, attracted by the state’s relaxed virus measures. Pictured: Miami Beach, March 22 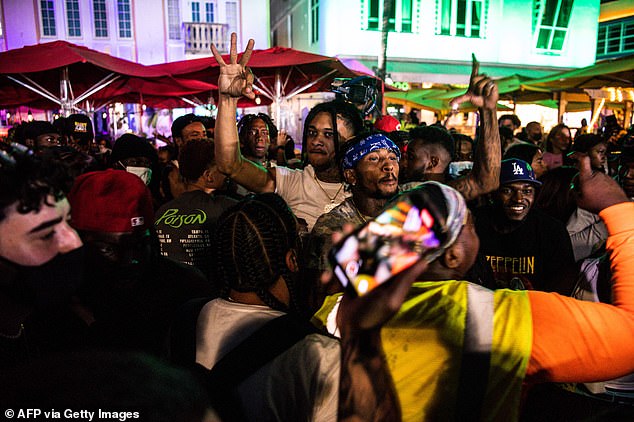 Revelers flocked to the beach city in Florida for the annual gathering, which has gone ahead despite the pandemic

‘It has been increasingly bad every year,’ Rivero said. ‘It’s unfortunate. Calling it quits is not under consideration, but it has been a thought in our heads.’

Jonathan Plutzik, owner of the Betsy Hotel South Beach on 14th Street and Ocean Drive, said his 130-room inn was operating near full capacity and he expected it to remain so well into May, with the cheapest rooms going for $449 a night.

‘In 2020, no one had any expectations we would be as busy as we are now,’ Plutzik told Reuters. ‘That is both a blessing and a challenge.’

‘Our city leadership, including law enforcement, doubled down to get ready for spring break. Clearly it wasn’t enough, so the city imposed some stricter rules, like the 8 p.m. curfew, which I am deeply supportive of,’ he said.

Miami Beach, perched on a string of coastal islands across Biscayne Bay from Miami proper, abruptly shut down spring break early last March as the pandemic hit, ordering bars and restaurants closed while outlawing social gatherings of more than 10 people.

Mayor Dan Gelber has said all manner of out-of-town visitors swarmed back into Miami Beach after Florida Governor Ron DeSantis on Feb. 26 lifted coronavirus restrictions, declaring the state an ‘oasis of freedom.’ 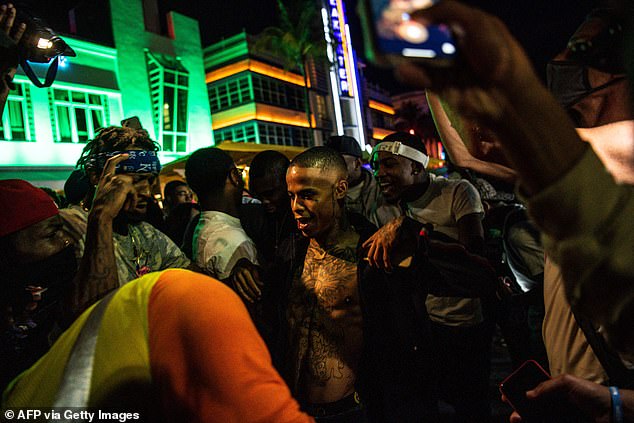 Pictured: People dance on Ocean Drive in Miami Beach, March 22, 2021. Police have reportedly made more than 1,000 arrests, seized nearly 100 guns and even brought in SWAT teams that used pepper bullets to disperse crowds

‘If people want to come to a hard-charging beach party, we aren’t the place,’ Gelber told Reuters on Tuesday. ‘We’re definitely pulling up the welcome mat for that. We made over 1,000 arrests the other day. I certainly hope that sends the message.’

Of those arrested, according to Gelber, only 10 per cent were students, and about half were from out of state.

‘By and large, these were not your college students taking a break before final exams,’ he said.

Surrounding jurisdictions and the state highway patrol have sent reinforcements while the curfew remains in effect over the next three weeks, Gelber said, adding he would consider lifting it sooner if the situation calms down.

In the meantime, South Florida’s annual winter and springtime influx of visitors is a key component of the region’s tourist and leisure industry.

‘In some cases, the profits you make during January, February and March will help carry you through the slow season in the summer,’ said Juan Tejeiro, 29, an entrepreneur who owns a bike and jet ski rental shop on 9th Street and Washington Avenue.

The curfew does not directly affect his business because he normally closes around 7 p.m., and he is glad for the restrictions.

‘I’ve been worried someone will break and smash by windows at night,’ Tejeiro said. ‘I also had a customer who got one of my bicycles stolen from him last week.’

Also on Sunday, two men were arrested for allegedly drugging and raping a woman who later died in her hotel room while on spring break in the Florida city. 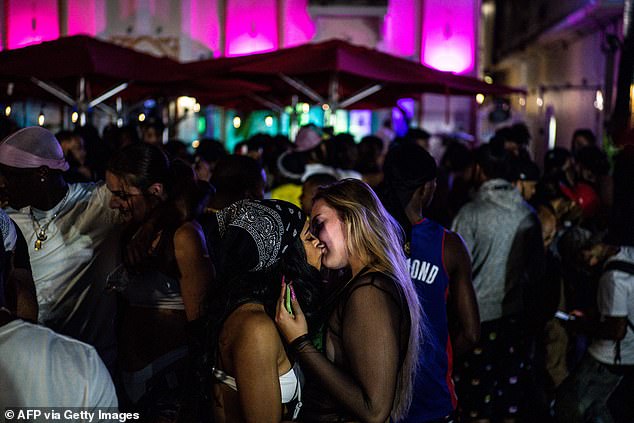 Miami Beach, perched on a string of coastal islands across Biscayne Bay from Miami proper, abruptly shut down spring break early last March as the pandemic hit, ordering bars and restaurants closed while outlawing social gatherings of more than 10 people 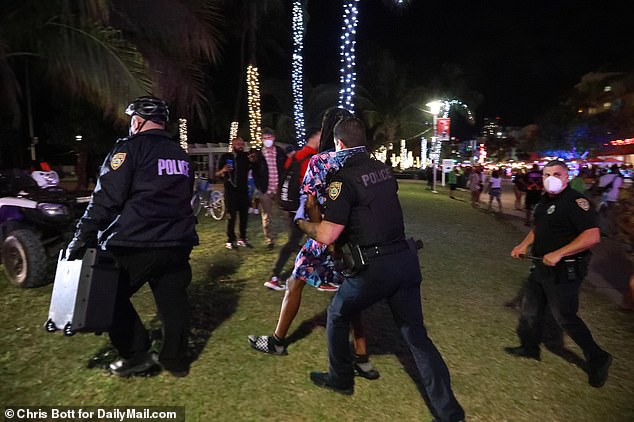 One person was seen being taken away by police on Monday, who have arrested more than 1,000 since February

Evoire Collier, 21, and Dorian Taylor, 24, both from Greensboro, North Carolina, allegedly gave 24-year-old Christine Englehardt a ‘green pill’ and then took her back to her hotel in South Beach.

The two men are accused of raping Englehardt, who was visiting from Pennsylvania, before stealing her phone, cash and credit cards which they then used as they carried on partying in the spring break hotspot.

Englehardt’s semi-naked dead body was found on the bed in her hotel room Thursday.

Investigators are now working to determine if her death was caused by the pill given to her by the two suspects.

According to a police report, Collier told officers the two men met Englehardt at a local restaurant before giving her the drug as they walked along Ocean Drive.

The group then headed back to the Albion Hotel at 1650 James Avenue, reported the Miami Herald. 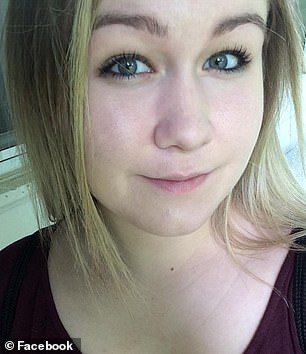 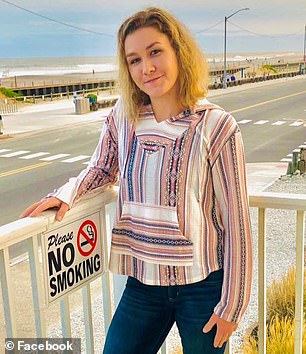 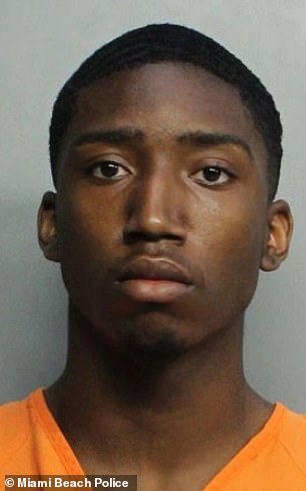 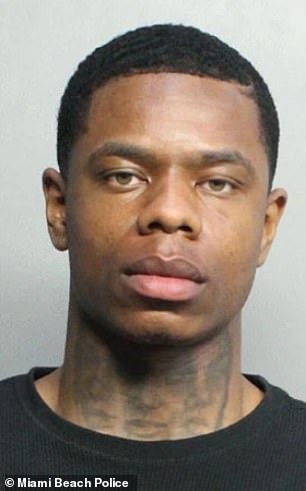 Evoire Collier, 21, (left) and Dorian Taylor, 24, (right) were arrested for allegedly drugging and raping a woman who later died in her hotel room while on spring break in Miami

Surveillance footage taken from the hotel lobby shows the two men entering the hotel with Englehardt at around 1 am Thursday.

As they walked into the elevator in the building, the woman was staggering and Taylor was holding her from behind ‘by the neck so she could stand’, Miami Beach Detective Luis Alsina said in a court hearing Monday.

Collier said he and Taylor each had sex with Englehardt and that Taylor raped her as she seemed to be unconscious, authorities said.

Police said Englehardt was not able to have consented to sex with either of the two men while under the influence of alcohol and narcotics.

Collier and Taylor then stole her phone, cash and credit cards and left her unconscious in the room ‘without any concern for her welfare or safety,’ the police report said.

The two men were then captured on the hotel surveillance cameras leaving the building around an hour after they arrived.

They then allegedly went on a spree using the victim’s cards at ‘various locations’ across Miami Beach including at liquor store South Beach Liquors.

Englehardt’s semi-nude body was found on the bed in the hotel room Thursday and emergency services were called.

A cause of death is yet to be determined with the Miami-Dade Medical Examiner’s Office carrying out further tests to learn if she died from an overdose from the pill given to her by the suspects, the Herald reported.