US Rep. Marjorie Taylor Greene denied knowing a prominent white nationalist despite speaking at his rally and posing in a photo with him on Friday.

Greene, a Republican from Georgia, had appeared as a surprise guest at the America First Political Action Conference in Orlando, an event organized by Nick Fuentes, a white nationalist who was permanently suspended from YouTube for anti-Semitic hate speech in 2020.

After speaking at the event, Greene posed in a photo with Fuentes and right-wing pundit Michelle Malkin, but when questioned about her appearance at AFPAC and relationship with Fuentes, Greene denied she knew him.

‘I do not know Nick Fuentes,’ Greene told CBS on Saturday. ‘I have never heard him speak, I have never seen a video [of him].

‘I do not know what his views are so I am not aligned with anything that is controversial.’

She went on to explain that she appeared at Fuentes’ AFPAC event in to talk about ‘god and liberty’ and reach out to his young followers because ‘it’s a generation I’m extremely concerned about.’ 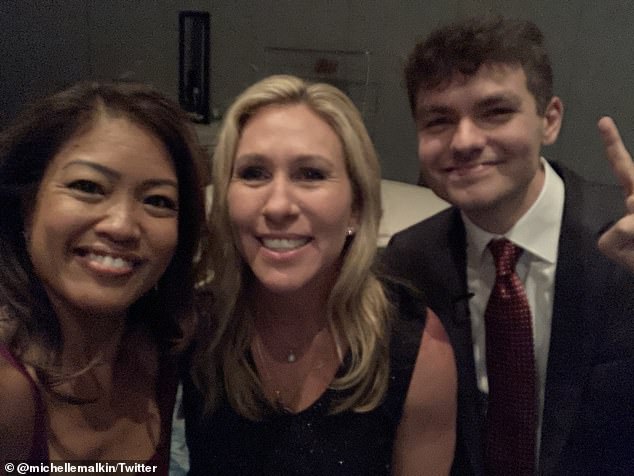 US Rep. Marjorie Taylor Greene (center) denied knowing white nationalist Nick Fuentes (right) despite taking a picture together with him and right-wing pundit Michelle Malkin during his America First Political Action Conference in Orlando on Friday 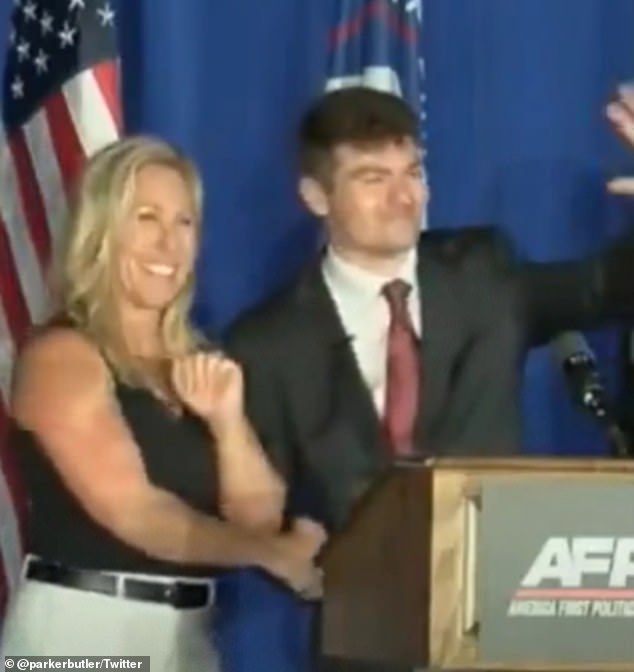 Greene came out as a special guest at Fuentes’ AFPAC event to talk about ‘god and liberty.’ The two are pictured together at Friday’s event 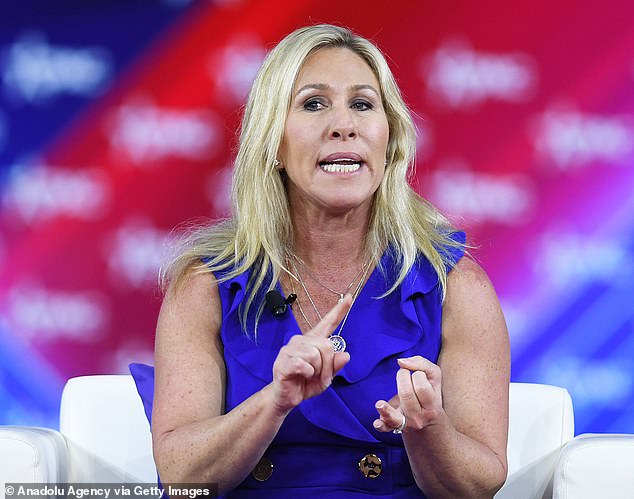 Greene defended her appearance at AFPAC and denied any involvement with Fuentes. She is pictured speaking at Conservative Political Action Conference on Saturday 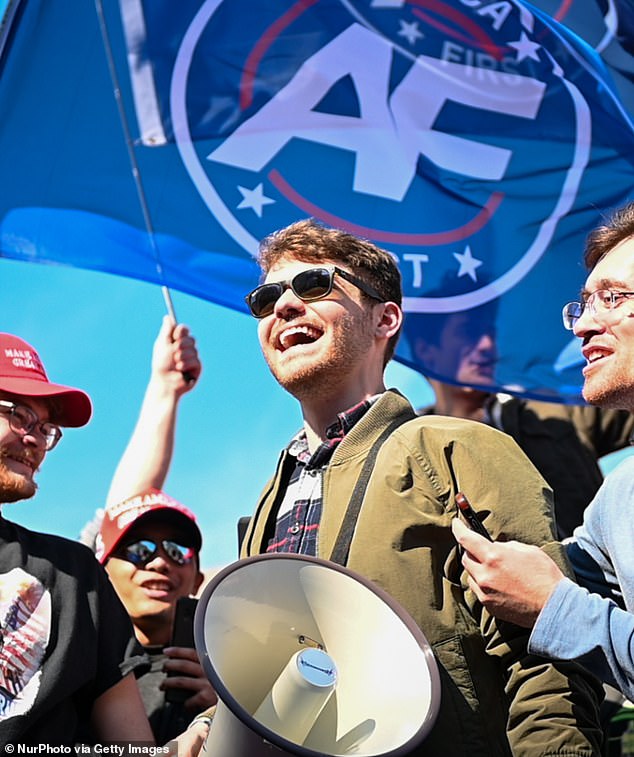 Nick Fuentes, (above) founded AFPAC in 2020 to rival CPAC. Fuentes has been described as a white supremacist by the Anti-Defamation League and was permanently banned from YouTube for making anti-Semitic remarks 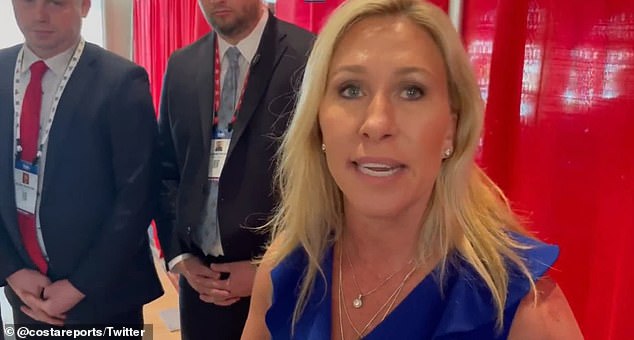 When one of the CBS reporters informed Greene that Fuentes was a white nationalist, she said she didn’t support that view and repeated that she knows nothing about Fuentes

Fuentes, who has been described as a white supremacist by the Anti-Defamation League, founded AFPAC in 2020 to rival the popular Conservative Political Action Conference, which also held it’s annual conference on Saturday.

He gained infamy for making many anti-Semitic comments, denying the Holocaust happened and opposing women’s right to vote.

When one of the CBS reporters informed Greene that Fuentes was a white nationalist, she said she didn’t support that view and repeated that she knows nothing about Fuentes.

She also told reporters that Russian President Vladimir Putin was a murder over his invasion of Ukraine, a move Fuentes had previously praised.

On Twitter, Greene said that she is not responsible for Fuentes views, only for her own.

‘I am not going to play the guilt by association game in which you demand every conservative should justify anything ever said by anyone they’ve ever shared a room with,’ she said.

‘I’m also not going to turn down the opportunity to speak to 1,200 young America First patriots because of a few off-color remarks by another speaker, even if I find those remarks unsavory.’ 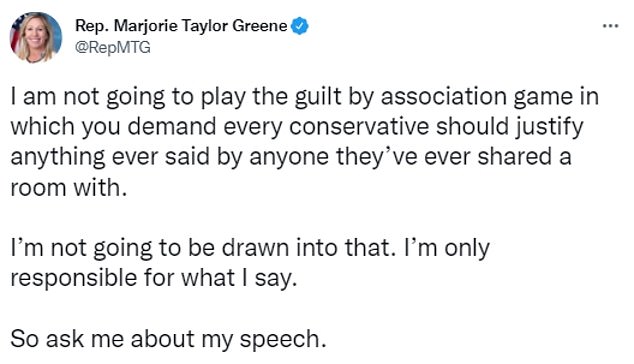 ‘It is unsurprising to see liar and fraud Marjorie Taylor Greene so quickly stab Nick Fuentes in the stomach mere hours after pretending to fawn all over his fast-growing movement of Christ-focused, America First Patriots.’

The Republican Jewish Coalition has condemned Greene ‘in the strongest possible terms’ for attending the event with ‘Nazi-sympathizer Nick Fuentes.’

‘It is appalling and outrageous that a Member of Congress would share a platform with an individual who has actively spread antisemtic bile, mocked the Holocaust, and promoted dangerous anti-Israel conspiracy theories.’

‘This has absolutely no place in the Republican Party, and RJC will actively oppose anyone who associates with Nick Fuentes, AFPAC, and their ilk.’

Republican National Committee chair Ronna McDaniel said in a statement about Greene’s appearance at AFPAC that ‘white supremacy, neo-Nazism, hate speech and bigotry are disgusting and do not have a home in the Republican Party.’ 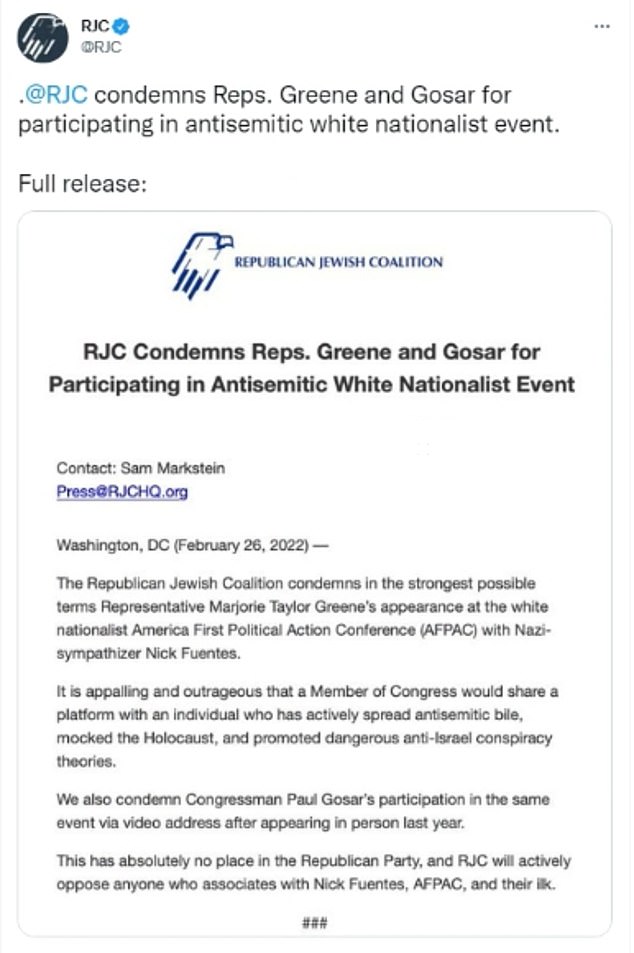