The suspect in an attack on a 68-year-old man Asian man on the New York City subway has appeared in court, accused of shouting racial insults at the older man in another incident of anti-Asian hate.

Marc Mathieu, 36, of the Bronx was arrested on Sunday and charged with assault after NYPD Transit cops recognized his image on a wanted poster. Mathieu has nine prior arrests, a police source told DailyMail.com.

Narayange Bodhi, originally from Sri Lanka, was commuting to his job as a security guard at 2:40pm Friday when an attacker viciously punched him on a 1 Train in Lower Manhattan, police and witnesses said.

Mathieu is accused of the attack on Bodhi while shouting ‘You Asian motherf*****!’ according to witness George Okrepkie, who aided the victim until police arrived.

‘I could not believe that somebody would attack a man of that age,’ Okrepkie told WNBC-TV. ‘Before I could even look he was standing on top of him.’

Narayange Bodhi, originally from Sri Lanka, was commuting to his job as a security guard at 2.40pm on Friday when the attacker viciously punched him on a 1 Train in Lower Manhattan

The alleged assailant (seen above) randomly attacked Bodhi while shouting ‘You Asian motherf***er!’ according to witness. Police had sought help identifying the attacker. He was arrested Sunday night

He was taken into custody and charged with second degree assault and transported to the Manhattan Criminal Court, where he was arraigned Monday.

A prosecutor requested $25,000 bail, while his public defender argued Mathieu was not the person who committed the assault, despite the clothing matching video footage and the accounts of eyewitness.

The judge determined Mathieu was a flight risk and ordered him to be held in custody in lieu of $25,000 bail.

Mathieu’s next court appearance is scheduled for March 26.

The NYPD said Sunday it did not yet have evidence the attack was racially motivated.

The department’s Hate Crimes Task Force published a call for information about the attacker without calling the incident a hate crime.

Okerpkie tried to grab the attacker, but said the man escaped out the subway doors as the train came to a stop at the Franklin Street Station in Manhattan.

The Good Samaritan took off his scarf and helped Bodhi use it to stop the bleeding until police arrived.

Bodhi’s family told the NBC affiliate that he has no memory of the attack, and suffered bruising on his face. 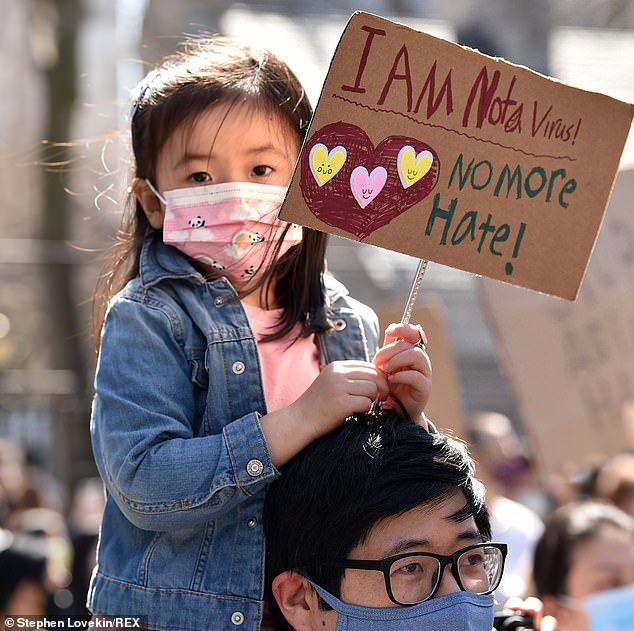 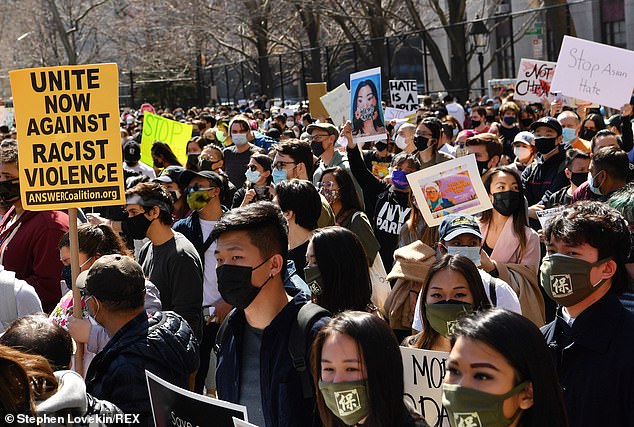 It comes amid national outcry over anti-Asian violence, which has skyrocketed in the coronavirus pandemic.

Last week, the NYPD revealed that it had recorded a 1,300 percent increase in anti-Asian hate crimes during the pandemic.

On Sunday, thousands marched in Atlanta, New York and Washington DC, among other cities, following the mass shooting last week at Asian-owned spas in Georgia.

The shooter, Robert Aaron Long, admitted to the murders but denied racial motives, claiming he was a frustrated sex addict who had frequented the spas and wanted to ‘eliminate’ a temptation.

Asian Americans have expressed outrage at the police for refusing to declare the shooting a hate crime, however.

In New York, mayoral candidate and former Democratic presidential hopeful Andrew Yang invited demonstrators to raise their hand if they had seen a spike in anti-Asian racism since the start of the pandemic.

Many activists blame the antagonism toward Asians on former president Donald Trump, who frequently called COVID-19 the ‘China virus’.

Another Asian man, 66, was also punched in the face in an apparent random attack on Saturday morning in Manhattan’s Chinatown.

In that incident, an unknown man believed to be homeless approached the victim, began yelling at him and then struck him in the face with a closed fist.