A teenager studying for his P-plates has taken to social media for help understanding a road rule that differs wildly between states.

The L-plater from New South Wales shared one of the questions from his driving test that was giving ‘inconsistent answers’.

The question asked if a driver could overtake a cyclist by crossing double white lines into the opposite lane if there was no oncoming traffic. 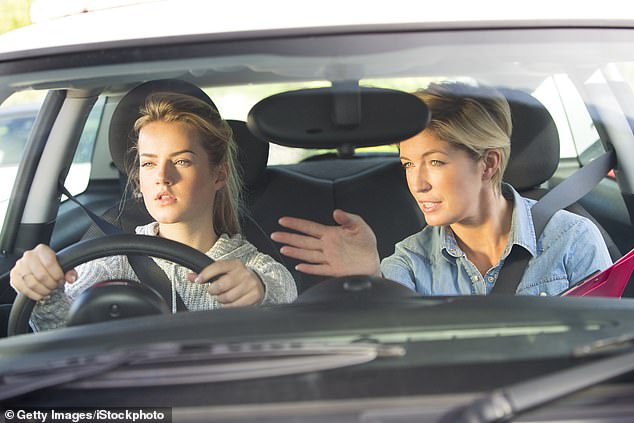 The test gave three options, ‘A. Yes, only if it is one-way traffic’, ‘B. Yes’ or the answer that was deemed correct by the test, ‘C. No’.

The puzzling question sparked a debate among Reddit users, who were divided over the frequently applicable road rule.

One user from NSW said drivers in their state could cross unbroken double lines to overtake a cyclist, as long as they had a clear view of oncoming traffic.

NSW Roads recommends drivers keep a one metre distance between their vehicle and the cyclist when overtaking at speeds under 60km/h, and a 1.5m when going faster than that. 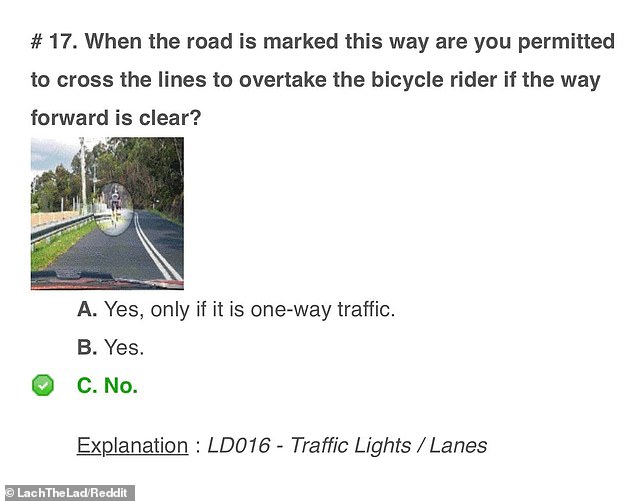 The L-plater was given three options, ‘A. Yes, only if it is one-way traffic’, ‘B. Yes’ or the answer that was deemed correct by the test, ‘C. No’

In most Australian states drivers can overtake a cyclist by driving to the centre of the road, cross or straddle dividing lines (broken, unbroken, single or double) and drive on painted islands or median strips.

Another user pointed out the question was poorly-worded and asked for an answer that was specific to the image.

‘It should make it clear that they want to know if it’s permitted to cross lanes to pass in the situation shown in the picture’, they said.

They agreed with the answer deemed correct by the test, which advised the driver not to cross the double white lines. 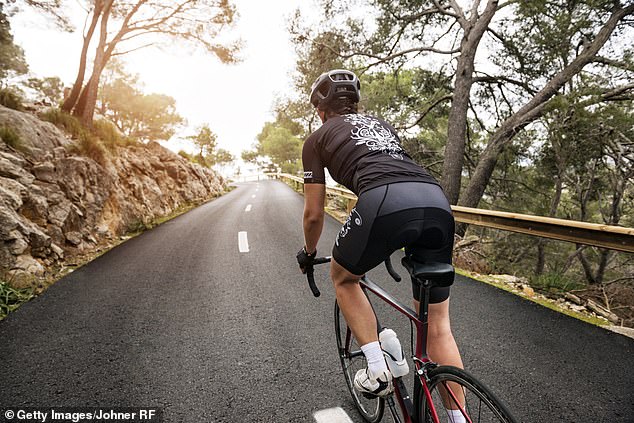 NSW Roads recommends drivers keep a one metre distance between their vehicle and the cyclist when overtaking at speeds under 60km/h, and a 1.5 metre distance for speeds over that

‘It’s not permitted here because the the view forward is quite restricted and it’s not safe to cross over.’

Another user said the driver would be at risk overtaking the cyclist because the upcoming bend was obscured by trees.

‘Probably a bit dicey if it’s a 100km/h road but at lower speed limits it’s likely to be fine’, they commented.

‘Of course, there’s also nothing wrong with slowing down and waiting until you’re past the bend.’

Drivers can overtake cyclists as long as they have a clear view of oncoming traffic. A distance of one metre should be kept between drivers overtaking cyclists at speeds under 60km/h and 1.5m over that. Drivers in NSW can cross double white lines to enter or exit a road

Drivers can cross a double unbroken line only if they’re passing a cyclist or avoiding a hazard and it’s clear and safe to do so. Drivers in SA are not permitted to cross double white lines to enter or exit a road

Drivers can overtake cyclists over double unbroken lines on a two-way road, straddle or cross a lane line (including a continuous line) on a multi-lane road and drive on a painted island

Drivers can only cross a double white line to avoid an obstruction and it is safe to do so, and are not permitted to overtake, turn, enter or leave the road

If you are overtaking a cyclist, or you need to avoid an obstruction, you may cross the continuous centre line(s) or edge line providing you have a clear view of any approaching traffic, and it is safe to do so

If safe to do so, it is legal to cross a single or double continuous line to allow the required room to overtake a cyclist