A combination of the new £9,000 tax-free allowance and lockdowns leaving some parents with more money has led to a spike in Junior Isa savings over the last year.

DIY investment platform Hargreaves Lansdown, which runs around a third of all investment Jisas, said more had been opened and more money paid in in the latest tax year, although the number of accounts with a maxed-out allowance fell.

Fellow investment firm OneFamily, a mutual which looks after just under a fifth, said there had been a 90 per cent rise in new direct debits set up this January to pay money into its Jisas compared to last April, while the number of lump sum payments have doubled. 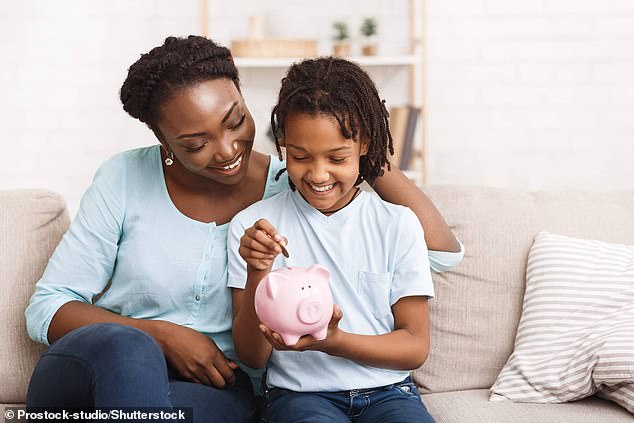 Doing it for the kids: Parents with more money to save as a result of lockdown have saved it into tax-free accounts for their children, figures from Junior Isa providers suggested

Its head of investments, Paul Bridgwater, said 45 per cent more Junior Isas had been opened in the first three months of 2021 compared to the same period last year.

Nationwide Building Society, which has a 37 per cent share of the children’s savings market, said just 7.5 per cent of its Junior Isas had at least £9,000 in them, suggesting very few maxed out their allowances.

Hargreaves Lansdown however added that the number of its account holders maxing out their allowance was up on 2017, when the annual Jisa allowance was just £4,128.

The increase in popularity is as likely to be as a result of multiple lockdowns as it is the publicity generated by the more than doubling of the allowance last year.

Higher income households spent almost five times as much money on things like hotels, restaurants and cultural trips as poorer ones in the year before the coronavirus pandemic struck, the Office for National Statistics said Tuesday, meaning many ‘had greater capacity to cut back on spending when restrictions were imposed’.

‘Those who could keep working and also had reduced costs may been able to save more for their children’, OneFamily’s Paul Bridgwater said.

Sarah Coles, a personal finance analyst at Hargreaves Lansdown, said heightened deposits were ‘likely to be linked both to the higher allowance and to the fact that so many people had a bit more money sitting in their accounts, and a lot more time to get on top of their financial admin, so they finally got round to it.

‘For those with a lot of investible assets, it makes perfect sense. They’ll be passing a big chunk of their estate onto their children, and this gives them a way to do it tax efficiently and gradually – so the money leaves their estate but the kids can’t get hold of it until they’re 18.’

By contrast lower income households spent a higher proportion of their income on essentials.

For those with a lot of investible assets, contributing to a Junior Isa makes perfect sense. They’ll be passing a big chunk of their estate onto their children, and this gives them a way to do it tax efficiently and gradually.

Paul Bridgwater added: ‘We found that 21 per cent who have children’s savings accounts or Child Trust Funds have decreased or stopped their payments over the past year – with 47 per cent citing financial hardship as being the main reason for this.

‘Meanwhile, a further 18 per cent have sacrificed their own savings so that they could continue to put money away for their children.’

Those who do have more money to save and want to put something away for their children have only a few weeks left to take advantage of the higher £9,000 allowance, which also applies to Child Trust Funds opened before the launch of Junior Isas in 2011.

Some 954,000 Junior Isas were paid into in 2018-19 with £974million subscribed. Seven in 10 Jisas were cash and 56 per cent of balances were held in cash, with investment Junior Isas having more in them on average.

Money can be paid into one of each type of Junior Isa each year, meaning parents and grandparents can split contributions into cash and stock market investments if they wish to. 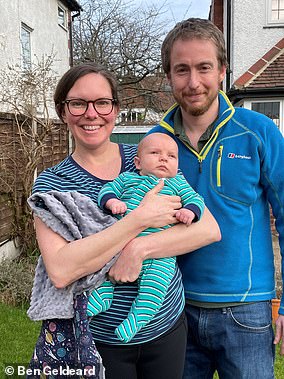 33-year-old father Ben Geldeard, from Leeds, opened a Junior Isa for his newborn baby, George, soon after he was born in January.

He and his wife Laura have set up a regular direct debit into the tax-free investment account from DIY investing platform Interactive Investor to help build a pot for George to help him pay for university fees or to contribute towards a first home.

‘We’re recognising the fees are higher than when I went to university’, Ben said, ‘plus my wife is American so it’s a more natural thing to do for them to save up when a child is born.’

Ben, who works in sales, started investing when he was at university before stopping for a while and clearing out the money to help him buy a first home. He started again roughly seven years ago, with both his own stocks and shares Isa and a personal pension.

‘I’m a fairly active investor so have refined my strategy by picking funds and my portfolio has outperformed cash in that time’, he said.

He is also picking the funds for George, splitting half of his son’s portfolio into a global tracker fund and putting the other half into actively managed funds. Half of that portion has gone into Baillie Gifford’s ‘Positive Change Fund’, which aims to invest 90 per cent of the fund in companies ‘whose products or behaviour make a positive impact on society and/or the environment’.

Among its top 10 holdings are the electric car maker Tesla and the pharmaceutical firm Moderna.

The other half has been put into an investment trust which invests in early stage companies. Ben said because of the 18-year investment timeframe he was comfortable with putting money into riskier investments.

‘There’s no need for any access’, he said. ‘If it does drop it’s not too bad, as there’s plenty of time for it to go back up.’

What’s available and what should savers pick?

Rates on cash Junior Isas have fallen somewhat since the Chancellor’s announcement last March, although this is more likely due to Bank of England base rate cuts and falling rates across the savings market than a surge in demand for tax-free accounts.

The highest-paying cash Junior Isa last year was offered by Coventry Building Society and paid 3.6 per cent. This year, it is offered by the same provider, but the rate has fallen to 2.95 per cent.

At the lower rate, the same level of contributions would grow to a smaller, but still sizeable pot of £213,414.19, according to our compound interest calculator.

Bath and Dudley building societies pay 2.5 per cent, while Tesco Bank pays 2.25 per cent. Rounding out the top five is Halifax, which pays 2 per cent.

However, it is worth noting these Isas are not free, as there is both a charge for the platform you use to invest, and a charge incurred on the investments you hold. 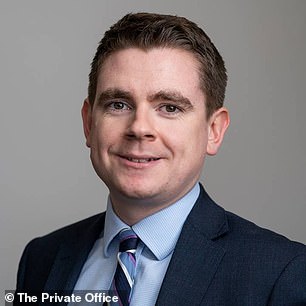 It is worth checking out a platform to see what it charges before you open one.

Deciding on whether to opt for a cash or investment Junior Isa is largely about how long you expect to be saving for, Alex Shields, a chartered financial planner at The Private Office said.

‘If the child is very young and the money will ultimately be used for a property purchase in 20 years’ time, a stocks and shares ISA invested in global equities could be appropriate as if the value of the investments fall in the short term, they should have time to recover before they are needed.

‘Conversely, if the funds are likely to be required for education costs in a couple of years’ time, a cash Junior Isa would likely be more appropriate as you would not want to invest in stocks and shares where the capital value is at risk.

‘However, ultimately you need to consider the level of risk you are prepared to take with the investments as if any capital loses even in the short term are unacceptable, a stocks and shares Isa is not going to be appropriate.’

What else do parents need to know?

Parents with plenty of money to save each year have been handed the option to make their child a ‘millionaire baby’ thanks to the increased Junior Isa allowance of £9,000.

Parents and grandparents who could contribute that much each year would leave their child with a £275,000 windfall at 18, assuming a return of 5 per cent a year on the investments held in the account, according to calculations from the wealth manager The Private Office.

But beyond that, leaving the money in an adult Isa at 18 and not touching the acount at all would result in a pot of £1.67m at age 55, assuming the same return. And that’s without adding any more money.

An important thing to remember is that a Junior Isa entitles the child to the funds at 18, and the ability to make investment or management decisions at 16.

‘You need to be comfortable that they will use the funds for the intended purpose’, Alex Shields added.

‘If the child becoming entitled to a relatively large amount of money at age 18 is a concern, then keeping the funds in the parents’ names and gifting them at a later date or using a trust could be more appropriate, even if this is not as tax efficient as the Junior Isa option.’

Parents with extra money can also benefit from the tax advantages offered by a Junior Isa.

‘Children have their own personal allowance, so for the majority there will be no tax to pay on their savings interest’, Alex Shields said.

‘However, parents should be aware that there may be a tax liability to themselves on the interest earned on any money they gift to their children, until they reach the age of 18.

‘If the total gross interest earned on all cash gifted by each parent outside the Jisa is more than £100 per year, then all of it, not just the excess, will be treated as that parent’s interest for tax purposes and therefore they may need to pay tax at their marginal rate, if it takes them above their Personal Allowance and/or Personal Savings Allowance of £1,000.’

However, money saved into a Junior Isa or its predecessor, the Child Trust Fund, is tax-free.