A judge blocked Boulder from enforcing a ban on assault rifles less than two weeks before the city was rocked by a mass shooting that left 10 people dead at a supermarket.

The National Rifle Association praised Hartman’s ruling in a tweet on March 16, saying it ‘gave law-abiding gun owners something to celebrate’.

Authorities have not confirmed what weapon was used, so it remains unclear whether it would have been covered under the ban that the Boulder Police Department stopped enforcing after Hartman’s ruling.

The Boulder attack marked the seventh mass shooting in the US in the span of a single week, coming just six days after eight people were killed by a gunman who targeted three spas in Atlanta on March 16.

The recent spate of shootings has reignited America’s debate over gun control after 2020 saw the lowest number of mass shootings in more than a decade as the coronavirus pandemic sent much of the country into lockdown.

The debate is especially intense in Colorado, which has had more mass shootings per capita since 1999 than all but four states, according to a 2019 analysis by the Denver Post. 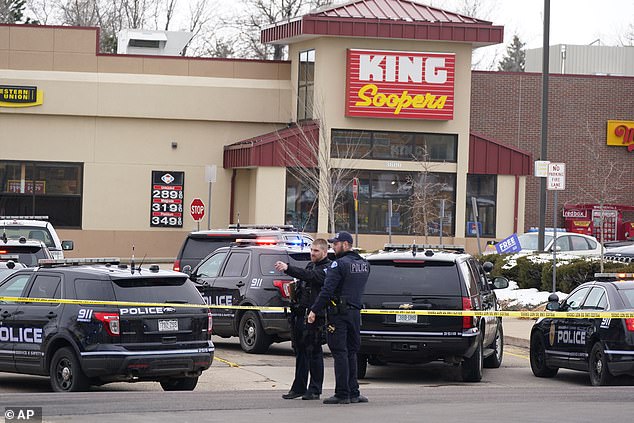 A judge blocked Boulder from enforcing a ban on assault rifles less than two weeks before the city was rocked by a mass shooting that left 10 people dead at King Soopers grocery store on Monday. Police are pictured at the scene after the alleged gunman was taken into custody

Boulder passed its two ordinances banning possession of assault-style rifles and large capacity magazines in the wake of the Parkland shooting in 2018, which left 17 people dead at Marjorie Stoneman High School in Florida.

The weapon ban applied to certain pistols and semi-automatic rifles with pistol grips, a folding or telescoping stock, or any protruding grip that allows a weapon to be stabilized with the non-trigger hand, according to the Denver Post. Large capacity magazines were defined as ‘any ammunition-feeding device with the capacity to accept more than 10 rounds’.

The city council created a permit system to allow anyone to keep a gun on the banned list if they owned it prior to the ordinance.

Anyone found in violation of the ordinance was subject to up to 90 days in jail and fines of up to $1,000. 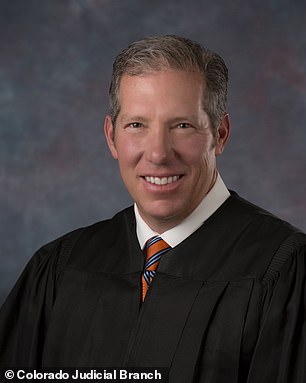 Gun advocates swiftly sued to have the bans overturned, bringing cases at both the local and federal levels.

The suit that led to Hartman’s decision was filed by two Boulder residents and two pro-gun groups – the Colorado State Shooting Association and Gunsport of Colorado – which argued that it violated a state law which said gun regulation should be left up to the state and federal government, not local legislators.

‘Inconsistency among local governments of laws regulating the possession and ownership of firearms results in persons being treated differently under the law solely on the basis of where they reside.’

Attorneys for the city argued that the council had a right to pass it’s own ordinances because it is a ‘home-rule’ municipality, meaning that it can enact laws without explicit permission from the state.

They also argued that the bans were necessary because there are not adequate rules on assault weapons and large-capacity magazines at the state-level.

But Judge Hartman disagreed, pointing to the state’s list of illegal and dangerous weapons. 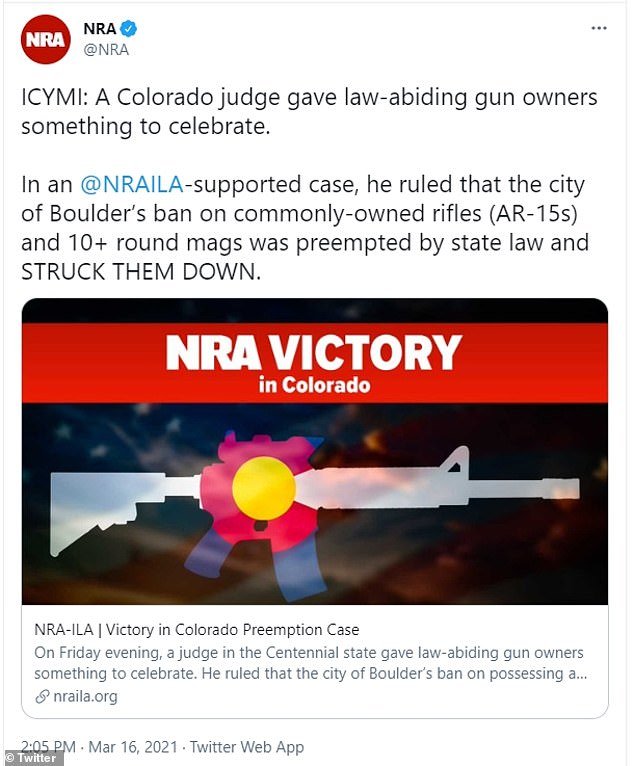 The National Rifle Association praised Hartman’s ruling in a tweet on March 16, saying it ‘gave law-abiding gun owners something to celebrate’

US rocked by seven mass shootings in seven days

The Boulder attack on March 22 marked the seventh mass shooting in the US in the span of a single week, according to a tally by CNN. Those shootings included:

Robert Aaron Long, 21, killed eight people, including six Asian woman, in a string of attacks at three spas in the Atlanta area.

Five people were shot and injured in a drive-by shooting while preparing for a vigil. It was unclear whether a suspect has been identified or arrested.

Four people were shot and hospitalized after an incident in the city east of Portland. A juvenile suspect was taken into custody.

Five people were shot inside a club, one of them left in critical condition.

Eight people were shot, one fatally, at a the Pryme Night Club. A suspect was identified but has not been arrested.

Six people were shot, one fatally, during a shooting at what police described as an ‘illegal party’.

The judge said that allowing Boulder’s bans would create ‘a ripple effect across the state by encouraging other municipalities to enact their own bans, ultimately leading to a statewide de facto ban or to a patchwork of municipal laws regulating assault weapons and LCMs’.

‘These provisions are invalid, and enforcement of them is enjoined,’ Hartman wrote in his ruling.

‘The Court has determined that only Colorado state (or federal) law can prohibit the possession, sale and transfer of assault weapons and large-capacity magazines.’

Boulder spokeswoman Shannon Aulabaugh last week told the Denver Post that the city’s attorneys planned to meet with outside counsel to discuss the possibility of appealing Hartman’s decision.

Gun control advocates decried the ruling and called to repeal the 2003 law it was based on.

They also noted that a similar assault weapons ban in Denver was allowed to stand despite the state law.

The city of Denver sued the state over the law 2003, arguing that it was unconstitutional because it violated home-rule municipalities’ rights to pass their own ordinances.

The Denver District Court ruled that the city could keep its ban because it had unique circumstances, including an increased use of assault weapons and a rising homicide rate.

The court also noted that Denver’s ban had been in place for years –  since 1989.

The state appealed the ruling and it was upheld by a split 3-3 vote in the Colorado Supreme Court after one justice abstained from ruling.

Because the court didn’t come to a majority, the ruling did not set a precedent on whether other municipalities – such as Boulder – could pre-empt the state law.

Experts say Hartman’s ruling could send the issue back up to the Colorado Supreme Court, if Boulder chooses to appeal.