Jeopary viewers outraged at Dr. Oz  taking over as guest host have called for a boycott of the show, slamming his ‘anti science’ views.

The game show has been cycling through a variety of guest hosts since the passing of Alex Trebek on November 8.

On Monday, Dr Oz tweeted: ‘Tonight (and for the next two weeks), I have the great honor and privilege of guest hosting @Jeopardy ! Make sure to tune in.’

But some viewers have hit out over his selection, criticizing him for promoting ‘pseudoscience,’ including homeopathy.

‘Jeopardy! is a show that values facts and knowledge,’ the letter reads, stating opposition to Dr. Oz. ‘Throughout his nearly two decades on television he has used his authority as a doctor to push harmful ideas onto the American public, in stark contrast with his oath to first do no harm.’ 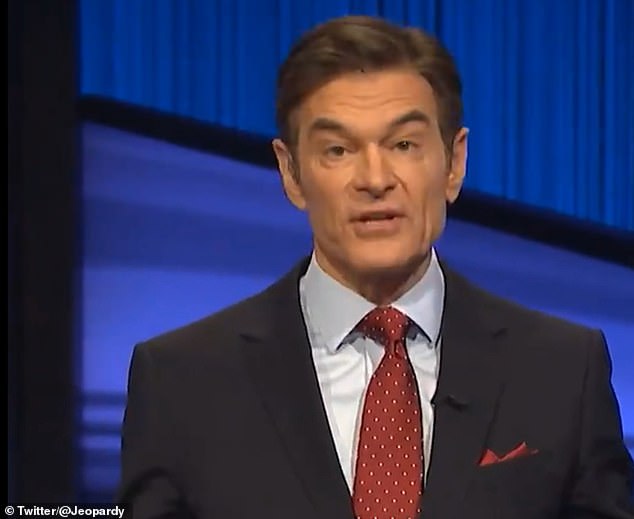 Dr. Oz hosted ‘Jeopardy!’ for the first time Monday night, but not without Twitter backlash

Some of the criticisms they had for Dr. Oz included pushing controversial supplements, legitimizing gay conversion therapy, talking about ‘cures’ for autism, and touting ‘hydroxychloroquine as a treatment for COVID-19.’

He has also been in favor of the controversial dieting practice of intermittent fasting.

‘Dr. Oz represents what has become a dubious trend in America: the elevation of the credentialed talking head at the expense of academic rigor and consensus,’ the letter posted on Medium reads.

‘Jeopardy! is known for being incredibly rigorous; a well-deserved reputation. As contestants, we’ve all seen what happens behind the scenes if there’s any doubt about a question. We’ve seen writers and judges frantically cross-reference answers in real time to make sure that the facts are accurate. To then invite Dr. Oz to guest-host is a slap in the face to all involved.’ 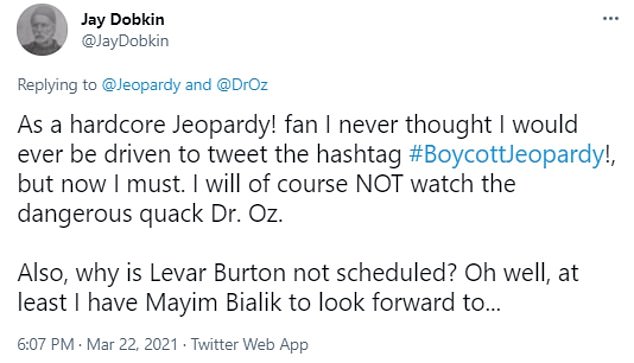 Dr. Oz began his first show on Monday by telling a story about the late Trebek.

While Dr. Oz was speaking, however, the movement to boycott the show and its temporary host grew online.

‘@Jeopardy I’ve been watching Jeopardy for the last 25 years. I watch at least 4 shows a week. I will not be watching the next two weeks because I don’t support your choice of @DrOz as a guest host. Jeopardy is about facts and Dr Oz is the complete opposite. #BoycottJeopardy,’ wrote Janet Davis.

‘As a hardcore Jeopardy! fan I never thought I would ever be driven to tweet the hashtag #BoycottJeopardy!, but now I must. I will of course NOT watch the dangerous quack Dr. Oz,’ wrote Jay Dobkin. ‘Also, why is Levar Burton not scheduled? Oh well, at least I have Mayim Bialik to look forward to…’

‘That you would give this dangerous quack any more visibility is a sickening insult to the memory of Alex Trebek. You couldn’t pick anyone more opposed to everything he stood for. You should be ashamed! #BoycottJeopardy,’ another user wrote. 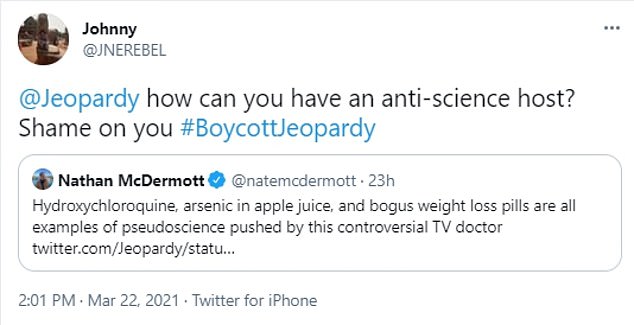 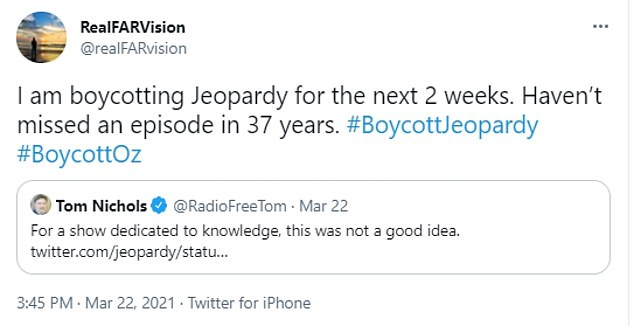 Many users threatened to boycott the show for the next two weeks, which spans Dr. Oz’s hosting schedule.

‘@Jeopardy, how can you have an anti-science host? Shame on you #BoycottJeopardy,’ wrote another user.

But there were a few users who celebrated Dr. Oz’s appearance on the show after his appearance Monday.

‘Way to go, Dr. Oz. Love seeing you on the show,’ one user tweeted.

DailyMail.com has reached out to Dr. Oz’s representative for further comment.

Despite the controversy erupting around Dr. Oz’s hosting appearance, his time on ‘Jeopardy!’ is doing good for the world.

According to Yahoo Entertainment, the show matched the contestants’ winnings with a donation to Dr. Oz’s charity, HealthCorps, raising $23,001 for the charity on Monday.

HealthCorps, which is based in New York City, aims to save lives by dealing with health inequities in at-risk communities. right up until the end.

Trebek passed away at age 80 after a two-year battle with pancreatic cancer, but continued hosting Jeopardy! — which he had been the face of since 1984 — until just days before his passing.

Executive producer Mike Richards told the Today show that Trebek was in ‘enormous pain’ for those last episodes but made the ‘herculean’ effort to be there.

‘He was an absolute warrior,’ Richards said.

‘And what he was able to do by giving himself back to the set, to tape those final episodes … we didn’t know it was going to be his final episodes and neither did he. But it was herculean.

‘He was in enormous pain,’ he added. ‘He was, you know, ten days away from passing away. And you will not sense that in any of these [final] episodes. He is strong. He sounds great. He’s funny. And he’s amazing.’

Richards admitted that a ‘normal person’ would likely have stopped filming a year and a half before Trebek was, considering he was getting chemotherapy once a week while filming.