This is the incredible moment a white dove landed on the hand of a Ukrainian priest who was helping evacuate people from Kharkiv earlier today.

In the footage, which has been viewed on Twitter more than 40,000 times, a priest can be seen beaming as he holds the white dove on his right hand.

The video was shared online by Daria Kaleniuk, the executive director of the Anti-Corruption Action Centre, an organisation tackling corruption in Ukraine.

The priest, dressed in white robes, a black coat and a black hat, shares some words in Ukrainian before releasing the dove which flies off out of shot.

In the background, church bells can be heard as the priest stands in front of a coach in a snow-covered road in Kharkiv.

Police for the Kharkiv region – the country’s second biggest city – said on Monday that 209 people have died there alone, 133 of them civilians.

The head of the UN nuclear watchdog also said a neutron generator at a physics institute in Kharkiv has been destroyed but there has been no release of radiation.

The head of the International Atomic Energy Agency, Rafael Mariano Grossi, said on Monday that the relatively new facility was considered ‘subcritical’ and had ‘a very small inventory of material.’ He said it produced neutrons for scientific experiments.

The site was part of a cooperation between the US and Ukraine, according to Grossi. He said that ‘it’s a scientific institution, so it’s really very regrettable what happened.’

If Russia seizes the city, it will be able to launch an offensive on Kyiv from another front. 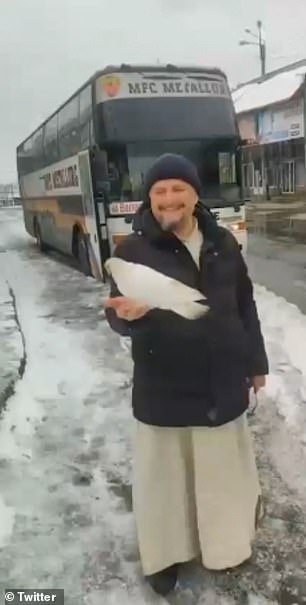 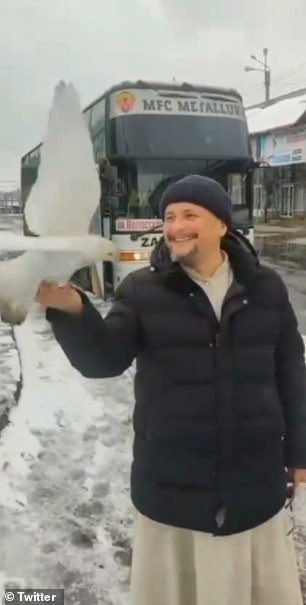 UN prosecutors say Kharkiv has been subjected to indiscriminate shelling, in a possible war crime.

This comes as more than 1.7 million Ukrainians fleeing Russia’s invasion have so far crossed into Central Europe, according to the United Nation’s refugee agency, as thousands more streamed across the borders.

Poland – which has the largest Ukrainian community in Central Europe – has received more than 1 million Ukrainian refugees since the conflict began on February 24, with the milestone passed late last night.

A total of 1,735,068 civilians – mostly women and children, as men stayed home to fight – have so far crossed the border into Central Europe, the UNHCR said.

In a statement it added: ‘This prevents the safe passage of humanitarian columns with Ukrainian and foreign citizens, as well as the delivery of medicines and food.’

The ministry called on foreign leaders to force Russia to observe a ceasefire to prevent what it said could be a humanitarian catastrophe.

Russia calls its actions in Ukraine a ‘special operation’.

Ukrainian officials accused Moscow of resorting to ‘medieval siege’ tactics in some places, and in one encircled city, Mariupol, there was no sign yet of an evacuation. 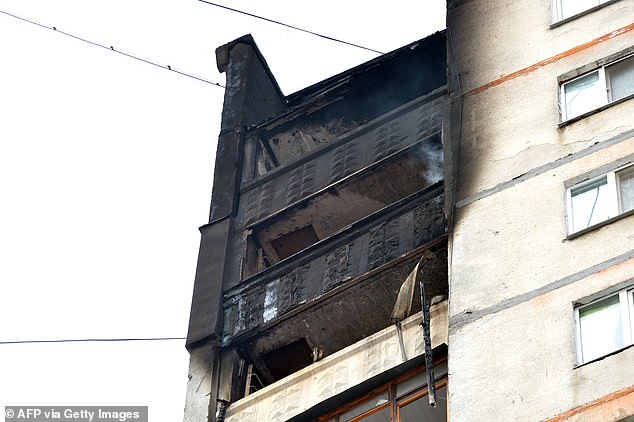 Pictured: A photograph taken on March 7, 2022 shows burned flats following a shelling in Ukraine’s second-biggest city of Kharkiv on the 12th day of Russia’s invasion of Ukraine 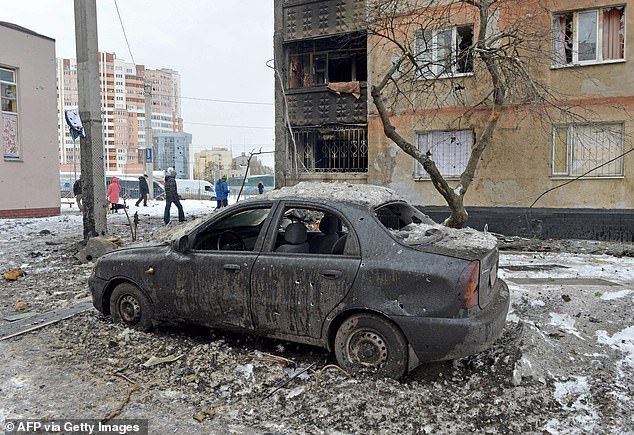 Efforts to set up safe passages for civilians to leave besieged areas over the weekend fell apart.

But the Russian Defense Ministry announced a new push today, saying civilians would be allowed to leave the capital of Kyiv, the southern port city of Mariupol, and the cities of Kharkiv and Sumy.

The two sides met for a third round of talks Monday, according to Russian state media, though hopes for any breakthrough were dim. The countries’ foreign ministers are also scheduled to meet in Turkey on Thursday, according to that country’s top diplomat.

Ukrainians, whose ferocious resistance has slowed the invasion and thwarted any hopes Moscow had for a lightning victory, have been reinforcing cities across the country.

The death toll, meanwhile, remains unclear. The U.N. has confirmed a few hundred civilian deaths but also warned the number is a vast undercount. Police for the Kharkiv region said Monday that 209 people have died there alone, 133 of them civilians.