Nicola Sturgeon’s right-hand man in London accused a journalist of setting him up for ‘a kicking’ as he desperately tried to avoid answering questions about whether she misled Parliament.

SNP Westminster leader Ian Blackford levelled the accusation at astonished Sky News presenter Niall Paterson this morning as he was grilled over the First Minister’s mounting troubles in Scotland.

She today dismissed calls to quit despite a damning inquiry finding by a Holyrood committee that she misled Parliament over the Alex Salmond row.

Responding to a no confidence motion laid by the Tories at Holyrood, the First Minister accused critics of deciding she was guilty before any evidence had been heard by the cross-party committee.

Mr Blackford, who leads SNP MPs in Westminster, was asked by Mr Paterson repeatedly whether he agreed with the committee that his boss misled Holyrood.

He shot back: ‘I can see what you are trying to do and of course I did hear you speaking to your studio as I was waiting to come on that you were going to give me a kicking, it is quite clear what is happening here.’

An astonished Mr Paterson  replied: ‘No, that’s not what I said.’

Mr Blackford then went on to insist Ms Sturgeon had acted ‘beyond reproach.’ 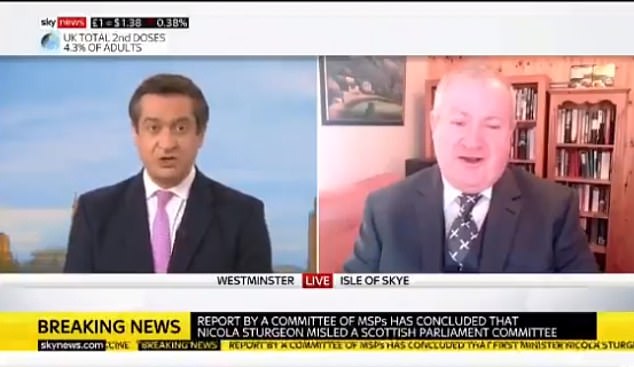 SNP Westminster leader Ian Blackford levelled the accusation at astonished Sky News presenter Niall Paterson this morning as he was grilled over the First Minister’s mounting troubles in Scotland. 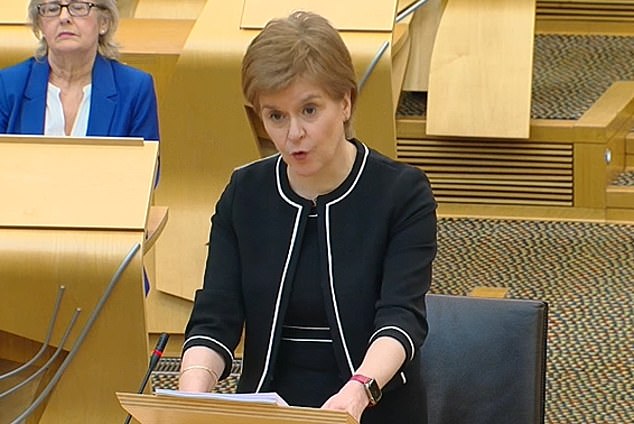 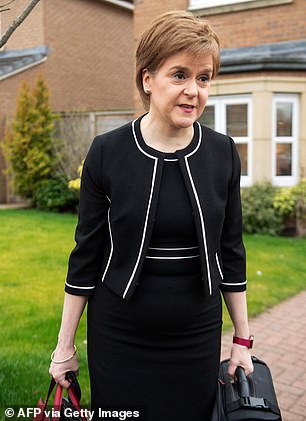 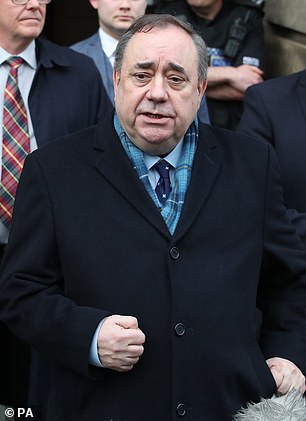 Ms Sturgeon jibed that she would not be ‘bullied out of office’ when she faced MSPs this afternoon – gloating that she had been cleared by a separate probe carried out by a QC.

Ms Sturgeon said she ‘rejects entirely’ the idea that she misled Parliament, and said she was ‘at peace with my own conscience’ over the extraordinary controversy.

But Ruth Davidson for the Scottish Conservatives told her that the ‘honourable thing would be to resign’.

Ms Sturgeon looks certain to survive the confidence vote due at 4pm, with the Greens and Labour refusing to join the Tories.

It comes hours after the committee concluded she misled MSPs by giving Mr Salmond the impression she would intervene in his case.

The MSPs said witnesses supported Mr Salmond’s account of a meeting she initially ‘failed to recollect’ in March 2018, and it was ‘hard to believe’ she had ‘no knowledge of any concerns about inappropriate behaviour on the part of Mr Salmond prior to November 2017’.

‘If she did have such knowledge, then she should have acted upon it,’ the report said.

‘If she did have such knowledge, then she has misled the committee.’

The committee also delivered a bruising assessment of the Scottish government’s ‘unacceptable’ obstruction of access to crucial material including legal advice.

The findings are in contrast to the verdict of a separate report yesterday, when James Hamilton QC cleared Ms Sturgeon of breaking the ministerial code – despite concluding her account was ‘incomplete’.

The committee split down party lines, with the four SNP members objecting to key findings, but crucially the nationalists’ usual allies the Greens choosing to side with the opposition.