A Covid-like virus is running rampant through Melbourne after a year of social distancing and lockdowns left young children and the elderly with weakened immune systems.

Hospitals across the city have been experiencing a surge in the number admissions for respiratory syncytial virus (RSV), which is far exceeding ‘winter levels’.

Melbourne mother Kellie Conlon recently had to take her three children to hospital after they became infected with the virus, including her four-month-old daughter who ended up in intensive care. 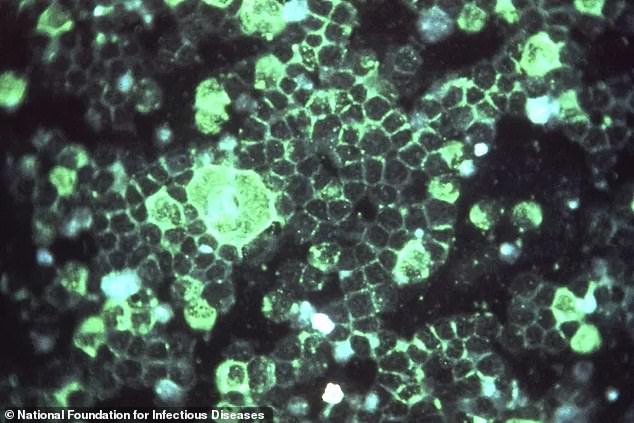 ‘They had her on high-flow oxygen and she was screaming for the entire night. It was very traumatic. I honestly thought we were going to lose her,’ Ms Conlon told Seven News.

The respiratory virus, a common cause of pneumonia and bronchiolitis, is spreading with more people mixing in the community post-lockdown despite normally peaking during the winter months.

‘Now that kids are back in circulation again, so are the viruses that we normally see around winter time,’ Dr Stephen Parnis from the University of Melbourne said.

He warned it was not just young children at risk but the elderly, too.

‘Chronic conditions mean you are more susceptible to getting sick if you have a virus that might only marginally affect younger adults,’ Dr Parnis said. 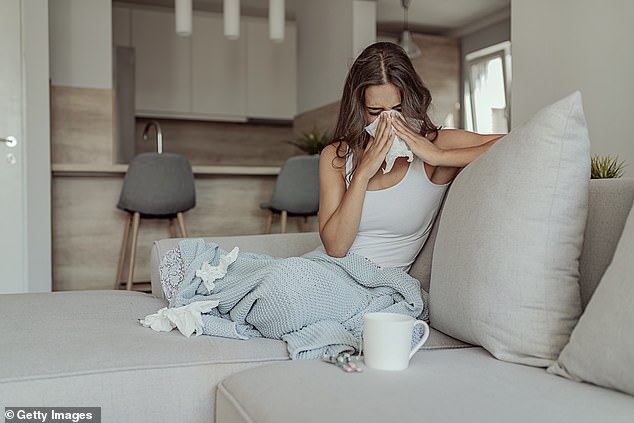 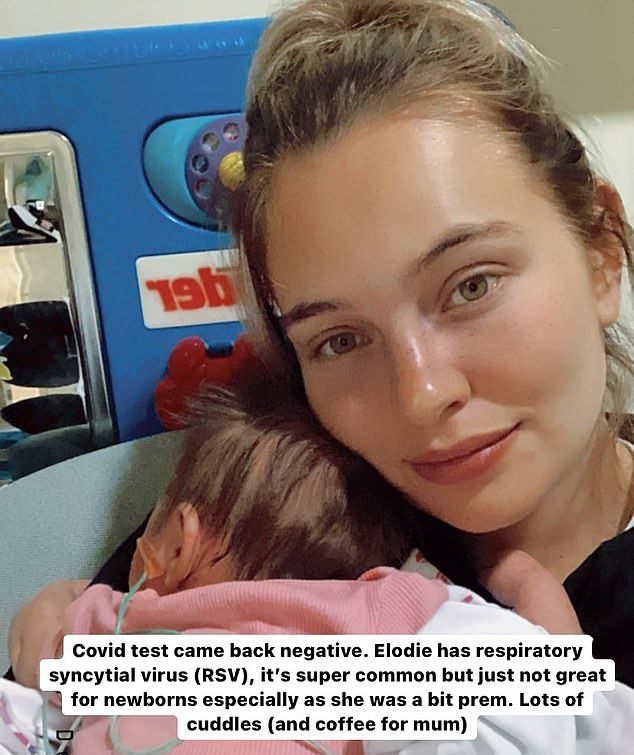 Pictured: NRL star Tom Burgess’ fiancée, Tahlia Giumelli, revealed in December their daughter Elodie was in hospital after suffering from RSV. That same month NSW Heath announced respiratory illnesses had been surging across the state

‘There is definitely a surge in children presenting with RSV across the entire healthcare system,’ Dr Cubbit told The Age.

‘In other words, there are clearly a large number of sick kids needing acute care at the moment.’

Dr Hannah Moore, the co-head of the infectious diseases epidemiology at Telethon Kids Institute, said babies born when social distancing was crucial at the height of the pandemic were more likely to get RSV.

‘We’ve now got a larger population that has been immune to RSV, that haven’t seen RSV before – so the general population’s immunity level is quite low,’ Dr Moore told the ABC.

Barwon Health’s Dr Caroline Bartolo said the same Covid-like prevention measures should be followed to stop the spread of RSV.

‘My advice would be to wash your hands often. If you are unwell, please stay home. If you have sick children, please keep them home,’ she said.

Respiratory syncytial virus, or RSV, is a virus that causes respiratory infections. Illness is common in children under 2 years of age. In this age group RSV can cause bronchiolitis (inflammation of the small breathing tubes of the lung) and pneumonia (infection of the lung). Infections peak in late autumn or winter in NSW.

Almost all children will have been infected by the age of three years, but symptoms are often only mild. Recovery from the illness results in immunity to further infection but this is not long-lasting.

What are the symptoms?

Symptoms begin between three and 10 days after infection. Most cases are mild, with symptoms of a runny nose, cough and fever. Sometimes an ear infection can follow. Symptoms can be more severe in babies under 6 months with wheezing and shortness of breath, irritability and poor feeding.

How is it spread?

RSV can spread easily from person to person through droplets from a sneeze or cough. People can also be infected by touching their nose or eyes after touching a person with RSV or contaminated items. A person is usually infectious for up to 10 days after symptoms begin.

In December, NSW Health issued an alert for parents of children under five to stay vigilant for RSV after data showed ‘increasing Emergency Department presentations for bronchiolitis, pneumonia and other respiratory illnesses in children aged 0-4’.

‘While much of our focus this year has been on limiting the transmission of Covid-19, there are a number of other respiratory viruses that are transmitted very easily, and can result in severe illness in young children and other vulnerable people,’ Acting Executive Director of Health Protection, Dr Richard Broome, said.

The same month NSW health issued their alert, NRL star Tom Burgess’ fiancée, Tahlia Giumelli, revealed their daughter Elodie was in a Sydney hospital after suffering from RSV, which is one of the most common causes of childhood hospital admissions.