Hilarious moment LA Dodgers fan gets SPLATTERED with nacho cheese while catching a homer from Justin Turner, who kindly sends over more chips: ‘I ruined a meal so I had to replace it’

A Los Angeles Dodgers fan got a home run ball and an order of nachos from third baseman Justin Turner on Wednesday night, and all it cost him was his nice, clean sweatshirt.

Turner had a plate of nachos delivered to the unidentified fan to replace the one he obliterated with a third-inning homer, leaving the man covered in golden nacho cheese.

‘I felt bad,’ Turner told reporters after the 4-2 win over the visiting Rockies. ‘I’m sure it was not a cheap plate of nachos.’ 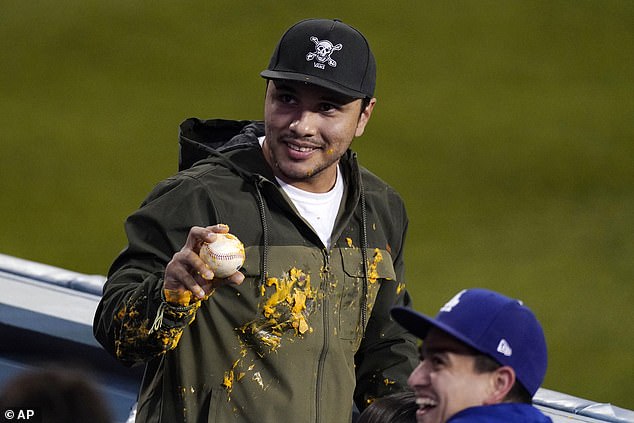 The bomb Turner launched off Colorado pitcher Jon Gray was hit directly at the unidentified fan, who was seated in the front row of the left-center field bleachers.

While other spectators in his section began standing in anticipation of the homer’s descent, this fan merely had to lean to his right, simultaneously corralling the ball as it ricocheted off his chips while shielding his female companion from a wave of warm cheese.

When the ball was secured, the man triumphantly raised it above his head while laughing at his freshly ruined sweatshirt.

The Rockies actually challenged the home run, arguing that the fan reached over the fence to haul it in. Ultimately the replay confirmed that the home run was legit and that the man’s sweatshirt was likely ruined.

‘When I saw the yellow splatter all over the guy’s chest, I knew it was a homer,’ Turner told SportsNet LA.

Although the man didn’t seem bothered by the incident, the Dodgers still sent over a new team sweatshirt, but only after Turner had ordered him some replacement nachos.

‘I went into the clubhouse after and asked one of the guys if he could replace his nachos,’ he said. ‘I ruined a meal for him so I had to replace it.’

Speaking to SportsNet LA after the catch, the man shared his gratitude to Turner: ‘Shout out JT, and thank you.’

Turner, later, posted a picture of the cheese-covered fan on Twitter with the caption: ‘Straight Cheesin cuz he caught the homerun ball.’